Typically the Rowlands travel outside the four walls of their home during this season. Mount Rushmore was one of their destinations a few years ago. 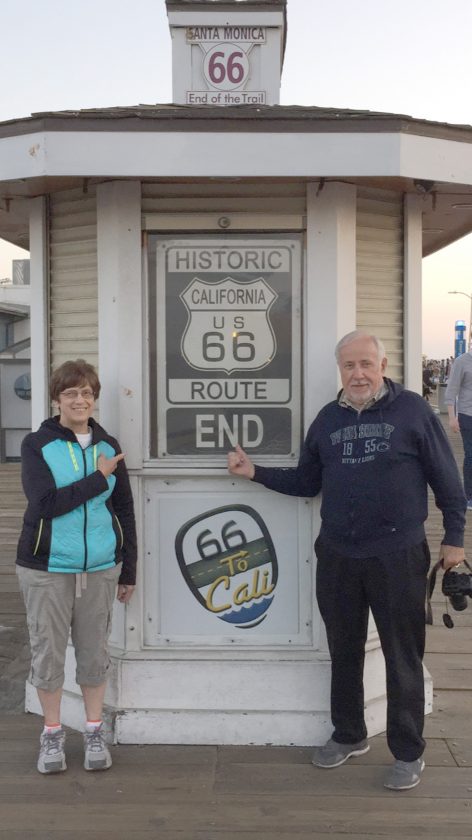 I think it is inevitable that we will all take away some of the same things from COVID-19, but each of us will have our own stories as well. My life has continued very much the same while being very different.

Having retired in our 50s, we have been used to doing what we want when we want where we want, knowing the checks are in the mail, whether we are at home, visiting out of state family or on a road trip. We are content with staying home for days on end or traveling for weeks to the other side of the United States or even the world. The differences in our personalities came out when we were told to stay home.

Because my husband Fred, has asthma and of our ages (ouch), I talked him into taking the advice we were being given from our government. Even though I knew we would be in for a few weeks, on my last stop at a supermarket, on March 14, I bought little, mostly-fresh produce, thinking it would be a perfect time to empty the freezer and cupboards. I had proclaimed that we were staying in even if we had to eat freezer-burned meat from 2015.

Since I went into the shutdown knowing I would be staying home, I was comfortable living the life of a couch potato. I went from doing two or three weekly face-to-face interviews for the recipe page and for the nonagenarian articles to three to five telephone interviews about the effects the virus crisis had on local families and businesses. Between conversations on the phone, text messages and FaceBook, I never realized I hadn’t seen another person, other than my husband, until a friend mentioned it during the fourth or fifth week.

It was clear the occupants of this house were seeing the crisis from two entirely different perspectives. I saw every person who passed by our house, whether on foot or in a vehicle as infected. Fred, who is a very social person, saw them as an opportunity to connect to the outside world. He did fine the first week and then talked about going to fill his gas tank or to the post office or to buy ice cream the second week. I intervened, but seriously wondered how long I could keep him home. He came up with all sorts of bizarre ideas of how he could accomplish his goals in a safe manner, but I held my ground. 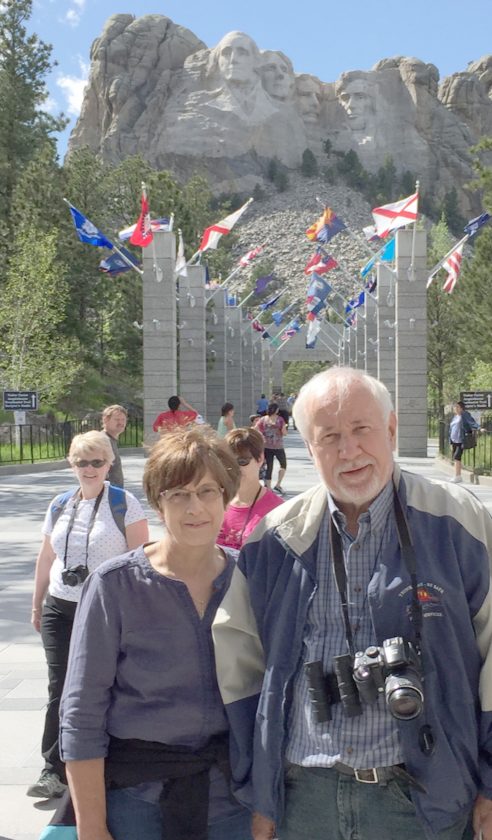 Typically the Rowlands travel outside the four walls of their home during this season. Mount Rushmore was one of their destinations a few years ago.

I was beginning to like the dent I was making in the freezer and in our canned good supply and had become quite creative, even though I have always been a scratch cook. I started to kick into survival mode and challenged myself to live off what food and supplies we had. One night I made corn chowder from corn my daughter had frozen from her husband’s bounty in 2017, bacon dated 2018 and half and half coffee creamer that had been set in the freezer last December. Not being a meat-lover, but wanting to concentrate on our protein intake, I found myself using T-bone and strip steaks in vegetable soup while my spouse rescued a few for the grill. I soaked navy and pinto beans and used them in various dishes.

Like many other people, I was working on developing pioneer skills. Although my homemade yogurt was drinkable, the loaves of white, wheat, brown and white batter bread, turned out quite well.

I was happily planning meals ahead, rather than at the last minute. I found myself rationing the fresh produce when I cooked two potatoes, rather than four. I cut beef roasts and ham into two or three pieces and saved the drippings from pot roast for a second meal of stew or soup. It occurred to me that even though I had had a new package of paper napkins, our supply could be depleted before I saw the inside of another store and therefore I started tearing them in two.

I arranged to pick up three dozen eggs from a local farmer’s mailbox, sanitizing them, one box at a time before setting them on the floor of my mini-van and then again when I reached my garage. I did the same to each egg and transferred them into pre-coronavirus egg cartons.

Early in the third week, a friend called from the Aldi parking lot to ask if she could purchase and leave some needed supplies on our porch. Even though I had been frugal, our fresh produce had dwindled to two carrots, three small potatoes and some onions and garlic. For the sake of our health, I decided to take her up on her offer and get a “few” things. She may have regretted insisting multiple times that I tell her everything I wanted, since my part of her order filled six paper bags. A few days later I was made another similar offer by a second friend and got two more bags and then again two weeks later. The worst part of “shopping” is the sanitization process that takes place in our garage afterward.

By the seventh week, I could see I had to get my husband away from our one-acre plot other than an occasional walk at a small, deserted local park and a few drives in the country, therefore I placed a Wegmans and Brigiotta’s curbside order. I didn’t tell him where we were going when I insisted that I drive my vintage Chrysler Town and Country with a full gas tank, but before leaving the driveway, I remembered it did not have the push button liftgate. Even though I did not want to give him a reason to get gas anytime soon, I wanted to use the release button in his much newer mini-van. All was well after a drive around Chautauqua Lake and a fresh supply of his beloved ice cream at the hands of a masked shopper.

Throughout this time, we have spent a few evenings playing dominos, either Mexican Train or Chicken Foot.

I have not binge-watched, but have caught up on the three seasons of “This is Us” stored on our DVR. My husband has always been close with his classmates, but has been making a concerted effort at this time to call several of them living all over the US, with repeat calls to some who are sheltering alone. With our church taking place online, we miss our church family and he misses choir practice and enjoys the devotional notes the choir director sends from time to time.

Both of our son’s recently returned to work after being home for 6-7 weeks. Thankfully, their wives were both able to continue working at their jobs. Our daughter has been getting up between 2 and 5 a.m. to do her college classes online, allowing use of the internet for her five children, Pre-K through seventh grade, and being available to help with their school work wherever needed. She continues her duties as church organist every Sunday morning, where she meets the pastor and the person who records the service. She shakes her head when her husband, a dairy farmer, tells her life has not changed for him.

Our oldest grandson, who moved back to his parents’ home after he was laid-off from his job in November, now has a hefty balance in his bank account thanks to bonuses he is receiving from the government. Like all other seniors, his sister’s final year of high school came to an abrupt halt and spring sports, prom and senior recognitions were cancelled.

Both sets of our June house guests canceled their travel plans. Our niece and husband from Arizona had planned to visit at the beginning of the month, one of only three times she has visited and the longest of the few vacations they have ever taken. My little sister from California and her husband, another couple we have seen only a few times over the last 30 years, were planning to visit at the end of the month.

Sadly, we have had two memorial services delayed until after things open. One of those services was for my uncle, whose grieving wife hasn’t had closure. Although it was very nice, we had to view Fred’s cousin’s funeral a few weeks ago on the screen of a laptop.

Our extended family is not staying together this weekend at a house on Findley Lake, a tradition we have observed for the last 18 years, because only the members of one household was permitted to stay, masks were required and the playground was closed.

We realize that we have sacrificed very little and think daily of the families who have mortgages to pay, children to feed and clothe and who aren’t sure if their job is waiting for them. We are sad about the businesses that will not reopen, dashing dreams and dissolving retirement plans. We hope that after this time of life on pause Americans became more family-oriented, God-centered and realize the most important things in life aren’t things.