Area Men Move On Despite Pandemic

Dan McLaughlin waits beside his wife, Ruth, during a ceremony in 2014 where he was enstooled as development chief of Ankaase, Ghana. Submitted photo 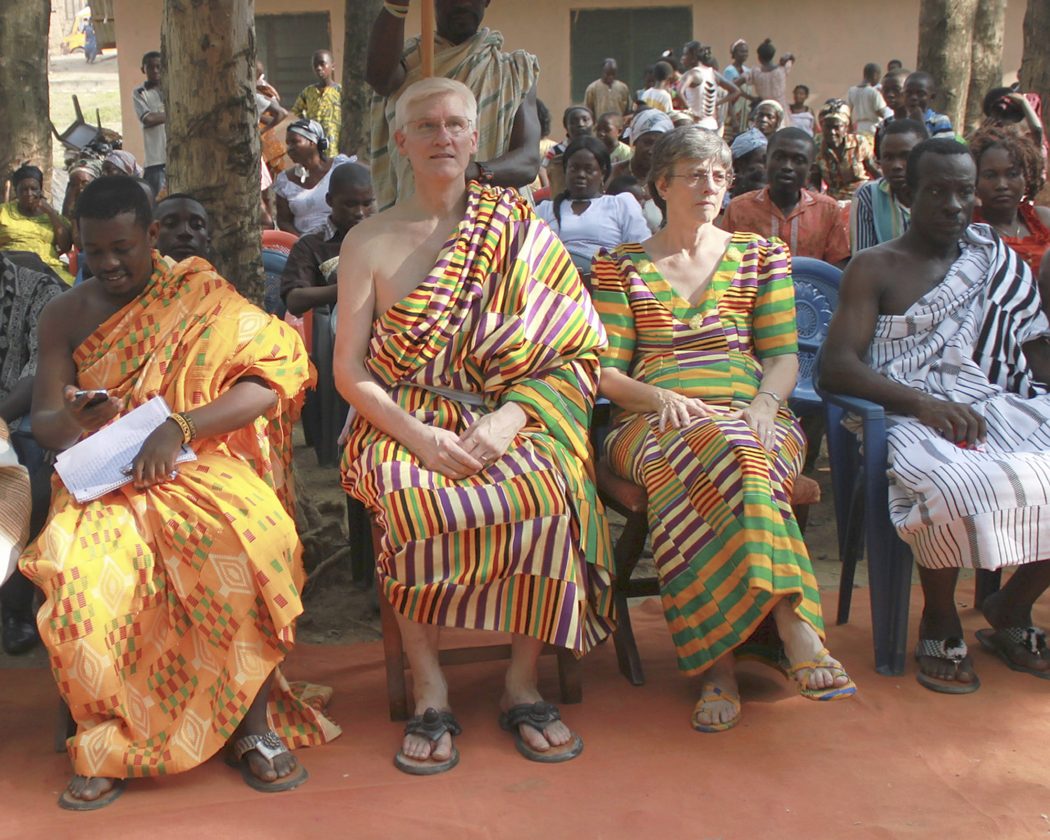 Dan McLaughlin waits beside his wife, Ruth, during a ceremony in 2014 where he was enstooled as development chief of Ankaase, Ghana. Submitted photo

Americans from all walks of life have had to change their plans as a result of the shutdown of COVID-19. The stories of Ryan Peterson of BioDome Project and writer Dan McLaughlin are just two of the millions that could be told.

BioDome Project was started in 2011 as an experimental gardening project with the goal of influencing area residents to grow a portion of their own food. Eventually, BioDome opened a local market featuring an increasing inventory of food as well as items made by local craftspeople.

“We have an ever-growing passion for connecting people to their food supply. We are committed to sourcing local, sustainable, fresher and healthier options of food and other household goods,” said Peterson, one of three owners of the market located 207 Pine St.

“We’ve absolutely been impacted (with the shutdown). We’re deemed essential, but we watched our fellow restaurant and retail store owners. We decided to close to keep ourselves and our customers safe so we could keep servicing them. We set up an online store with delivery and curbside.” 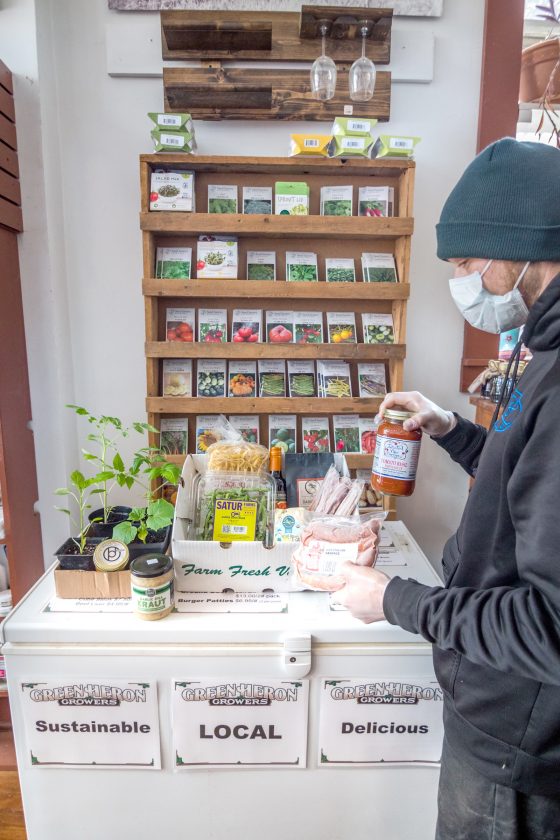 Like others facing the public during this pandemic, the businessmen wear gloves and masks.

“Gardening and growing plants is a big part of what the BioDome does. We annually start thousands of garden starter plants from heirloom seed in organic soil. We sell these plants for home gardening as well as planting around an acre of garden plots for vegetable production ourselves,” he said. “We also grow herbs, leafy greens, and houseplants year-round, some hydroponically.”

They sell seeds, soil, plants, gardening nutrients, dairy products and fresh produce, some sourced from other farms as well. Peterson notes his local farmers “have been doing very well.”

He regrets not having found a good way to sell his vendor’s handmade items during the current crisis.

“Eventually we plan on getting our vendor products online, but for now we’re trying to do our essential products, food, soap and health and beauty stuff. It is very hard to get those products out there.”

As of now, the business will deliver free to locations within Jamestown and free delivery to most of the rest of southern Chautauqua County on orders of $50 or more. Otherwise, there is a $5 delivery fee. Payment may be made by credit card or by cash or check on delivery. To order go to biodomeproject.com and look for the shop button.

“We’re going to keep delivering and if they relax the rules, we’ll have limited hours. During this unfortunate pandemic we hope people can notice the importance of locally produced goods as things disappear from shelves and supply chains get impacted. ‘Support Local Everything!’ Is our motto,” he said.

The crisis forced Dan McLaughlin to cancel a much-anticipated trip to Ghana after ample excitement and preparation.

“I was scheduled to fly to Ghana, West Africa on April 13 and stay until April 27, then fly to Sierra Leone and return home on April 30th. The original purpose was to speak at the University of Ghana in Accra, the capital city, with several other events scheduled,” said McLaughlin.

This, McLaughlin’s third trip to Ghana, would have followed two others where he had spoken at camps for young adults about liberty and entrepreneurship.

“Ghana was the first African country to gain independence, but unfortunately socialism was imposed as the form of government, as it was subsequently in most African countries. Though the nation is now a full democracy without an authoritarian government, many of the old socialist institutions, world views, and corruption persist and are preventing significant development there,” McLaughlin said.?A friend, who was the president of Africa Youth Peace Call, an organization devoted to the ideas of free people and free markets, had been reading the column McLaughlin had been writing since 2007. Because he liked what he read, he invited the writer to Africa to speak in 2013 and again in 2014.

During his second visit, the Randolph resident was invited to be a development chief for the fishing community of Ankaase, on the shore of Lake Bosumtwi, a lake in the basin of a 10-mile wide crater formed 1.1 million years ago from a meteor impact.

“Though I thought it would just be in a long-distance, informal advisory capacity, there was a full tribal ceremony with all of the regalia, the representative of the paramount chief, and a festival with all of the elders and people of the community,” he said. “I am a chief of Ankaase. It was a pretty amazing, fascinating experience, but a bit overwhelming.”

Since that time, the mentor has helped various individuals start small businesses and several non-governmental organizations (NGOs) to register, including the Sierra Leone Liberty Group, an organization in Sierra Leone for which he is a co-founder.

“I was to visit Sierra Leone at the end of this journey to meet with several groups of young men and women to discuss the role of markets and entrepreneurship in the development of their country,” he states.

He was honored to be asked to speak before 1,000 students at the University of Ghana in Accra about liberty and entrepreneurship in Ghana’s development.

“One of my students from previous camps in Ghana is now a senior at the Kwame Nkruma University of Science and Technology and president of the Student Economics Association. As president it was his responsibility to organize a seminar for which he got to choose the topic and the speakers.”

Much has transpired since McLaughlin’s initial trip in 2013. He has grown very fond of the African people and they of him.

“While in Accra, I was to meet with the president of the Institute for Liberty and Policy Innovation, an influential think tank in Ghana, and with the director of Research for Koforidua Technical University who is also the executive director of Africa Development and Resources Research Institute. He and his team are in the process of developing the Africa Development Online University and have invited me to be on the board of directors.”

With the growing interest in liberty and entrepreneurship in Africa, McLaughlin believes it is likely that, if the movement comes to fruition, the coming decades will see Africa will be a rising star.

His book, Compasson and Truth-Why Good Intentions Don’t Equal Good Results was first printed in Ghana, with subsequent publication in the United States. A second edition is in the works for both the Ghana and U. S. editions, as well as a Kindle version.

The author has been a full-time caregiver to Ruth, his wife of 40 years, who is in the late stage of fronto-temporal dementia.

“One of the difficulties that I faced in preparing for the travel was providing for the care of my Ruth. At least part of the time, she would need to stay in a nursing home, and my biggest worry about the trip was whether she would be the same when I got back. If there is anything good about the pandemic, it would be that I didn’t have to put her through something that might have been traumatic.”