The Smith Family gets exercise in a wooded area near their home. Pictured from left, Sara, Reidy and Stella with Serena in the foreground. Submitted photos

Gene and Yvonne Boe drove 20 hours from their winter home in Florida in an effort to continue social distancing.

Ann Brown, left, misses her family during this time of staying at home. She is pictured with her daughter, Barbara Cassevoy, before the COVID-19 restrictions took place. Submitted photo 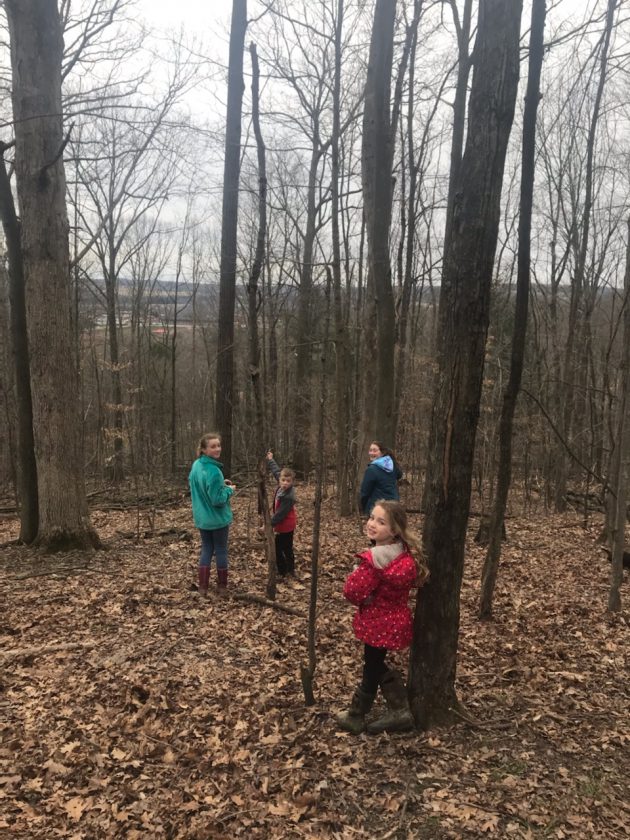 The Smith Family gets exercise in a wooded area near their home. Pictured from left, Sara, Reidy and Stella with Serena in the foreground. Submitted photos

I am reading comments on Facebook about some people going stir crazy with the social distancing due to COVID-19. Lives have been disrupted, but not all people see this as a disadvantage.

Maureen Smith of Randolph, a stay at home mom of four, who taught first and second grades for over a decade, is very positive about her current situation.

Her husband, Reid Smith had a conversation with his wife about how their generation, Generation X, were the first latch key kids and how he grew-up entertaining himself. He is in sales for a biotech company and has been able to work remotely from home over the past few weeks.

The first thing the former teacher did was to have her children write entries in their journals “because this has never happened and hopefully, will never happen again.” She keeps a two-month calendar on a white board which is color-coded with each child’s activities and appointments. 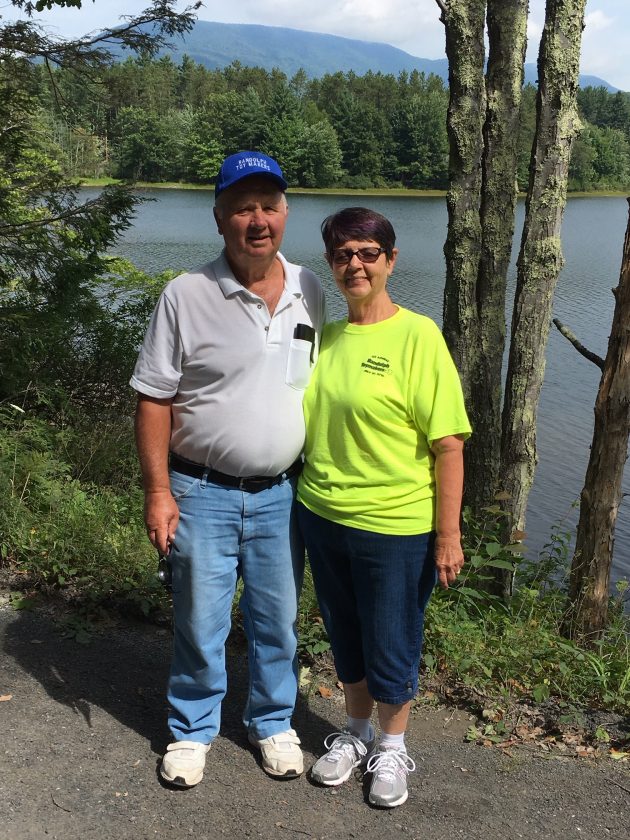 Gene and Yvonne Boe drove 20 hours from their winter home in Florida in an effort to continue social distancing.

“I felt guilty, but I felt really good about erasing,” she said.

By now her children’s spring sports practices would have been in full swing. Second grader Reidy had planned to play baseball while his fifth-grade sister Stella chose softball and Sara was going to run track as a seventh grader. Reidy’s twin sister, Serena, was taking a break this season, after playing softball last year. Since their property borders the woods, the family is taking advantage of the hiking opportunity from their doorstep.

“We’ve been going for lots of hikes. It’s keeps us all sane and a crazy new puppy, too,” Mrs. Smith said.

Her son is continuing his guitar lessons from Miss Heidi, who has adapted by teaching online. Her family got into the home school routine a few days after the Randolph Central School bus rolled up in front of their home delivering books, assignments and her fifth-grade daughter’s oboe. She is impressed at how quickly the school put it all together.

“It was so cool to see. I did not want them to go to school that Tuesday (as had been originally planned). We had already hunkered down.” 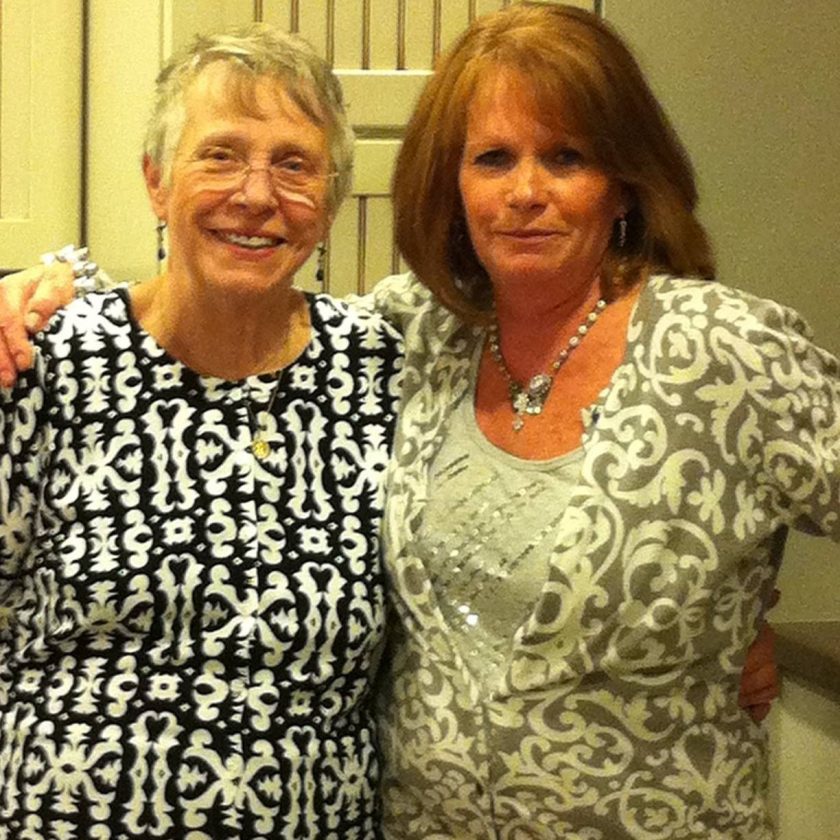 Ann Brown, left, misses her family during this time of staying at home. She is pictured with her daughter, Barbara Cassevoy, before the COVID-19 restrictions took place. Submitted photo

She connects to the school’s Facebook page every morning, takes a screenshot each day and sends it to her older children’s iPads. It has made it a little easier having the twins in the same room at school with identical assignments. Sara holes up in her room all day long while attending classes, as most of her teachers are very familiar with Zoom and online teaching.

On the downside, the school play, “Sister Act,” which Sara had practiced for and anticipated for several weeks, was canceled after a free afternoon performance for senior citizens.

For quite a while, she has been an “Instacart junkie” and even though she shopped just ahead of the social distancing, she is confident she can use this source by meeting one delivery service in Falconer and pick up the rest in another store’s parking lot.

Ann Brown, a retired school administrator, said “It has affected me. I don’t have a great need but I need to see my family. My kids want to protect me, so they aren’t coming. They’ll leave the groceries on the porch and my son comes for the trash.”

Even though it isn’t the same as face to face visitation, she is thankful to be able to FaceTime with her children, grandchildren and great-grandchildren. Her doctors have canceled appointments and she cannot participate in Hospice volunteerism, so she is spending her time knitting, quilting and praying.

“I’m an independent person and I want to get in the car,” she shared. “I’m making too much bread. I’m leaving it on the porch for my family to pick up.”

She is concerned about social media and compares her youth during World War II with today’s situation.

“I remember rationing and lights out with the shades down. Social media hasn’t been good. There is a lot of license in our society. You would not find people back then calling out names. You would look up to the leaders in the community. There was no condemning anyone else.”

Retired dairy farmers, Gene and Yvonne Boe, cut their winter in Zephyhills, Fla. short by one week. Before they left the Sunshine State, they started seeing long lines two and three people abreast, wrapped around the outside of the employment office.

“We started isolating the week before we left,” Yvonne said. “Our Canadian friends got a call from their insurance company telling them they needed to return within 10 days and soon after the Canadian government called all (residents) home.”

“Two weeks ago the Canadians started piling out of that park,” added her spouse. “Some of them live in RV (recreational vehicle) parks in Canada that aren’t open until mid-April.”

They set an exit date when confirmed cases of the virus started getting closer to their winter home. Mrs. Boe admitted she felt more at ease after that.

Little by little during the proceeding days, the couple packed their Chrysler Town and Country van. Last Saturday they left Hillcrest RV Resort at 3 a.m. and drove straight through arriving at their Kennedy home at 11 p.m.

“We stopped six or seven times for gas and restroom breaks. We had food packed for all day and bought coffee once because at one stop the restrooms were only available for paying customers. When we stopped for gas, Gene went directly to the restroom to wash his hands,” said the wife.

Mr. Boe drove the first two hundred miles and most of the other miles with his wife taking the wheel on occasion to provide needed breaks. He saw the 20-hour trip as a fun challenge. They didn’t make their usual stop at the South Carolina home of their son.

“I thought since we’d been pretty isolated for a week or two, why take a chance of stopping,” Mr. Boe stated. “I think it was a little like her folks. We used to laugh about how they had to get home to their own chairs.”

“People don’t think it is as serious as it is. Some have asked me if I would still take them to practice for their road tests,” he said.

He is not resuming classes until the local restaurants reopen.

“I’m personally not worried and I’m better off than most because my building is paid for. I may not be able to pay my taxes, but I don’t want to push it where I jeopardize my clients. I don’t ever want to do that. Never, ever,” said the Jamestown man.

I am worried about my son-in-law who is a New State Trooper and I’m worried about my father who is a resident in a nursing home. It has been going on for three weeks now and I don’t know if he is wondering why my sister and I are not going to see him,” he added.

The congregation of Panama United Methodist Church is still meeting, but no longer in person.

“I would say there are three or four main areas where we’ve been affected. The first is worship. Because of the mandates of the state and the suggestions of our Annual Conference, we are not meeting until, probably, May,” said Pastor Steve Taylor. We’re using online streaming as our main way of worship.”

The church’s worship service has been cut back to 45 minutes, rather than the usual one hour. In a normal service their attendance is about 175. During the online worship they are seeing that number nearly double. He believes they are reaching people whose churches aren’t doing online worship and possibly others who would not be comfortable entering the building.

“The second thing is financial resources. For five years we’ve had online giving. This crisis has more people giving online who would have been giving in person, but in general, our offering has decreased.”

The discipleship aspect is the third way the church has adjusted. Their leadership, worship, praise team, small groups and Sunday school classes had to innovate to stay connected at this time, with most of the groups using Zoom.

“Prayer groups are meeting with online videos. We’ve had more people join in than would normally meet in person in the online video conferencing and we’re excited,” said the pastor. “As a church, I hope we use this opportunity to expand our ability to reach new people in new ways and never go back to business as usual. We continue here at Panama United Methodist Church to trust God is in control and that He’s going to use this for His glory in our communities.”