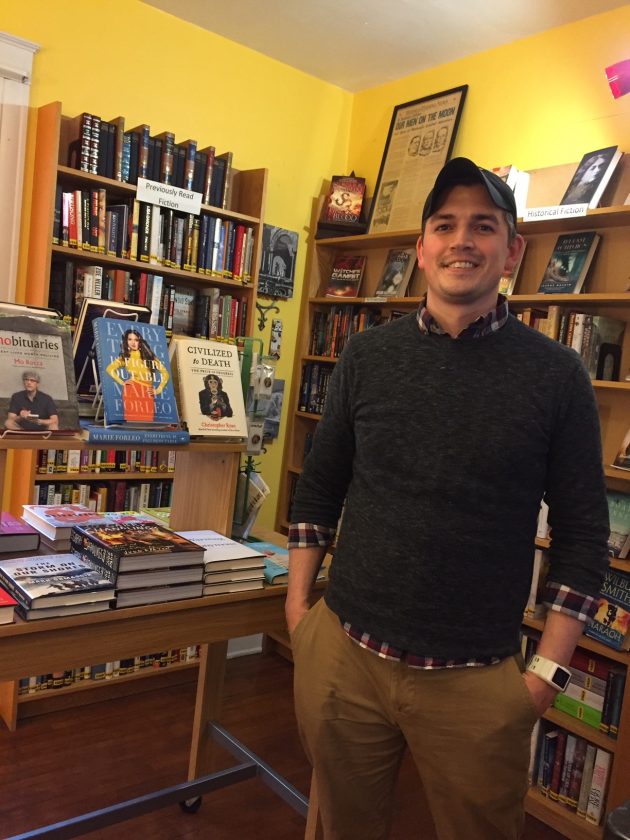 Bob Lingle stands near a table of newly-released fiction and non-fiction books at Off the Beaten Path Bookstore. Photo by Beverly Kehe-Rowland

Bob Lingle does not make New Year’s resolutions, instead, until this year, he set personal goals. His personal goals for 2019 were to finish the rough draft of a book he had started quite some time ago and to run a full marathon. He achieved the second goal, but not the first. For 2020, he has decided to choose a word for the year and that word is “empathy.” It is his desire that both he and his store, Off the Beaten Path Bookstore, will foster empathy in the coming year.

August 2016 is a month Bob and his wife, Shannon, will never forget because of the happy and sad events that were condensed into the first half of the month. The couple, who were living in South Buffalo with a two-year-old and a five-month-old, had made the decision to have one parent stay home with the children, due to the high cost of child care. Bob had told his employer on Aug. 1 that he would be leaving his position in order to be a stay at home parent. A week later his wife was notified that she had been hired for a teaching position at Maple Grove High School, the school from which she had graduated before going off into the world. Seven days later Lingle’s maternal grandfather passed away and sadly, four days after that, on the night of the funeral, Bob’s father died.

Before the move to Chautauqua County, the stay-at-home dad who had had seven years experience in bookstore management, had started looking for a place where he might open his own bookstore. His wife saw a post on Facebook about a mother and daughter’s desire to sell a bookstore in Lakewood a year and a half after the move. Her husband went to see the business the following day and spent the rest of that day and most of the next putting together his business plan.

After dropping his daughter off at nursery school the day after he had completed his plan, he took his then two-year-old son to the bank with him where the dad applied for a business loan. The branch manager was very supportive, but it was still necessary for him to jump through a few hoops. The loan was granted and the couple took ownership of Off the Beaten Path on Feb. 28, 2018.

He reached his first year goal of reducing costs and increased sales by 25 percent the second year. He attributes some of his success to his first job at Enterprise Rent-A-Car, where he learned to meet the customer in the middle.

“My best skillset is customer service,” he states.

A source that was very helpful in forming his business plan was a book by Ryan Raffaelli, an assistant professor in the Organizational Behavior Unit at Harvard Business School. After extensive research, Raffaelli put together the 3 Cs of independent bookselling’s resurgence: community, curation and convening.

The storeowner is excited about receiving a scholarship to the American Bookseller’s Association (ABA) four-day Winter Institute in Baltimore, where the professor will be speaking.

While taking in the seminars offered, he is hoping to learn how to more efficiently order from individual publishers. Many vendors with products related to books will be represented at the conference, as well.

The store has held 19 book signing events with nearly as many authors attending. Fiction author Lissa Marie Redmond, a retired cold case detective from Buffalo, was present to sign the first book in a trilogy in 2018. The book, A Cold Day in Hell, has been the stores best seller. She returned twice in 2019 after the second and third books came out.

A facetime event was held with Devin Murphy, an author who is from the Olean area, but who has relocated near Chicago.

Although he is now an avid reader, that hasn’t always been the case with Lingle. In fact, he struggled with reading as a child and had to attend summer school between second and third grades.

“And something clicked,” he says. “My fifth grade teacher gave me books to read before assigning them to the class.”

His high school English teacher from West Seneca drops by the store on occasion.

Lingle went to SUNY Fredonia where he majored in TV and film and minored in philosophy. Later he enrolled in seminary courses at Roberts Wesleyan, but only stayed a couple of months. He had thought he wanted to be an Army chaplain and was nearly finished filling out the required documents, when he realized that if he went into the service after leaving school, he was “just going to be in the Army” so he quickly got out of that situation.

He took a job at Barnes and Noble to have a flexible schedule in order to return to school to become an English teacher. After meeting his wife and many other unemployed teachers, he decided teaching may not be a good field to go into after all.

While at Barnes and Noble, he accepted a job with Follett as a course materials manager at Canisius College. He went to a weekend program at St. Bonaventure for an masters in integrated marketing communications. While working with the Buffalo International Film Festival, he met a man and helped created and implemented a marketing plan for the man’s campaign for mayor.

He later managed the Medaille College bookstore for three years, where he became communications director. He was hired by Ian Golden, who was in the primary for the Congressional race, the month he bought the bookstore.

“This (the bookstore) has become my favorite place in reference to being part of community,” he says as he tells about his young son enjoying afternoon visits with the customers of both his business and the attached Ryder’s Cup Coffee Shop.

“I will forever be grateful for being a dad,” he adds.

The Lingles have offered six of their best-liked recipes. Poucha was his great-grandmother’s recipe. Once his mother began making it, she became the official family Poucha preparer, because it was thought hers was the best. They like to serve it with eggs for breakfast.

Sift flour with dry ingredients. Cream butter with sugar. Blend in molasses. Add dry ingredients. Divide dough in half and shape into rolls. Grease three soup cans and pack dough tightly in cans. Cover with foil or plastic wrap and chill several hours or overnight. Cut end from can, but leave in place and use as a pusher to push dough out. Cut in 1/8-inch slices. Bake on ungreased cookie sheet or foil lined sheet at 350 degrees for 10 minutes.

In a food processor or blender, process the coconut and walnuts until crumbled. Remove from the blender and process the dates until they are in small pieces or until a ball forms. Add coconut, walnuts, oats, cocoa and chia seeds and pulse until combined. Don’t overly process the mix. Stir in chocolate chips by hand and roll the mixture into 1-inch balls. Chill bites in refrigerator or freezer for 15 minutes to set. Store in the refrigerator for up to a week or freeze to hold longer. Form the dough into 1-inch balls and set on a cookie sheet. Refrigerate for 15 minutes before enjoying.

Follow package instructions for thawing dough. Spray large bowl with olive oil, set dough inside, and cover with plastic wrap that has been sprayed with olive oil. Let rise overnight or roughly 6 hours minimum. Preheat oven to 350 degrees. Line a baking sheet with parchment paper and set aside. Roll the dough into a rectangle about 10-inches by 15-inches. Cover the surface with the sliced pepperoni. overlapping a bit. Sprinkle shredded cheese over pepperoni. Starting with one of long sides, roll the dough up tightly and pinch the seams and ends to seal. Place the prepared dough on the prepared baking sheet. Whisk the egg in a bowl and brush over top of dough. Bake until golden brown, about 35 minutes. Remove from the oven and cool a bit before serving.

8 oz shredded or 10 slices of cheese

Follow the instructions to thaw frozen bread dough. Spray a bowl with olive oil, put the dough inside, and cover with plastic wrap that has also been sprayed with olive oil. Leave in bowl overnight or roughly 6 hours minimum. Preheat oven to 350 degrees. Line a baking sheet with parchment paper and set aside. Heat olive oil in a pan over medium heat and add minced garlic. Cook for a few minutes. Add onion and saute for 5 minutes. Then add pepper, mushrooms and seasoning and continue sauteing while rolling out dough. Roll dough into a rectangle about 10-inches by 15-inches. Cover the surface of the dough with cheese, then carefully spread the vegetables onto the cheese. Starting with one of the long sides, roll the dough up tightly and pinch seams and ends to seal. Place prepared dough on baking sheet. Whisk egg in a bowl and brush top of dough. Bake until golden brown, about 35 minutes. Remove from oven and cool a bit before serving.

Peel and prepare potatoes as you would for mashed potatoes. When potatoes are tender, drain the water and add about 1/4 cup butter, (reserve rest of butter for basting the top), Velveeta cheese, salt and pepper. Mash thoroughly. Do not add any milk as potatoes will be too thin. Potatoes can be made ahead and refrigerated. However, decrease oven temperature and increase baking time.

Prepare hot roll mix according to package directions. After first rising, divide dough in half. Roll out one half to cover bottom and sides of greased jelly roll pan, 15 1/2-inches by 10 1/2-inches by1-inch. Spread potatoes (warm or chilled) evenly on dough. Roll out other half of dough to cover potatoes and slightly overlap the edge. Tuck top layer of dough down along the edges to meet bottom layer and seal in the potatoes. Preheat oven to 350 degrees. At this point, poucha can be baked. For a thicker crust, let rise again in a warm place for 45 minutes. Prior to baking, spread softened butter on poucha with a pastry brush. Bake until medium to dark brown or your preference, brushing with butter periodically throughout baking. Bake for approximately 25 minutes. If desired, brush with butter again after baking is complete. Serve warm. Poucha is wonderful reheated either in the microwave, or in a frying pan which gives it a nice crunchy crust. 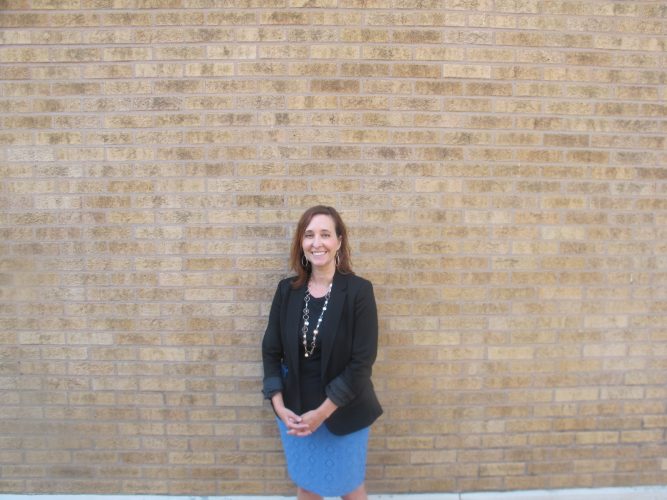 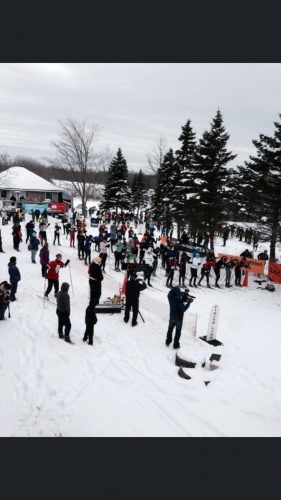 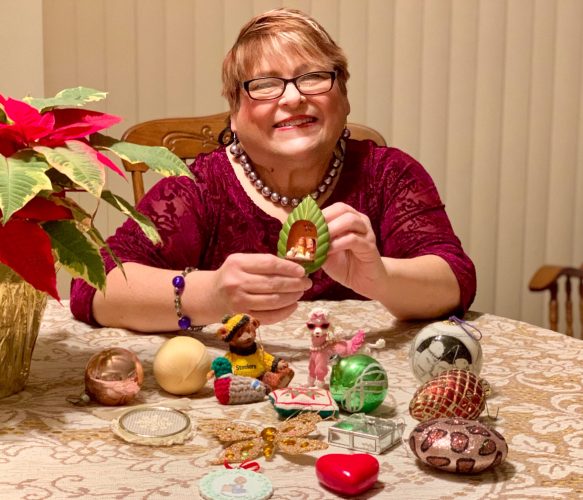 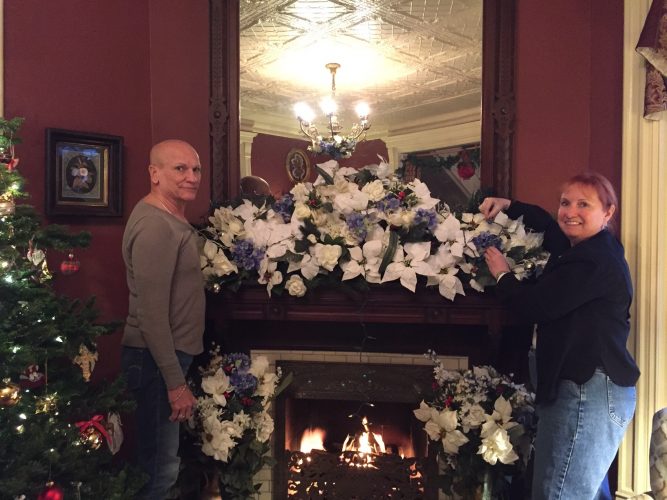 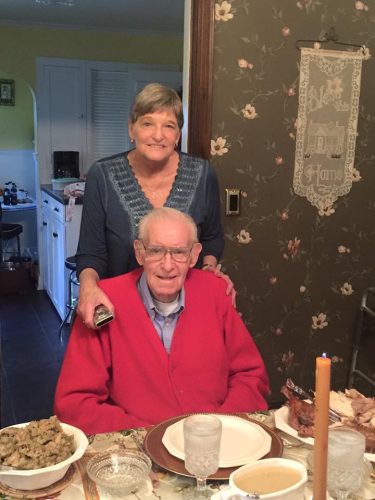