This is a close-up of one of many mini-quilts made by Faith Swanson. The small wall hangings are very time consuming due to the tiny blocks used to construct them. This one is embellished with buttons and beadwork. Photo by Beverly Kehe-Rowland

A colorful array of mini-quilts made from tiny pieces of fabric. This Kitchen Window quilt was made by Faith Swanson from redwork squares embroidered by her mother, Alberta Remington. Photo by Beverly Kehe-Rowland

This Kitchen Window quilt was made by Faith Swanson from redwork squares embroidered by her mother, Alberta Remington. Photo by Beverly Kehe-Rowland 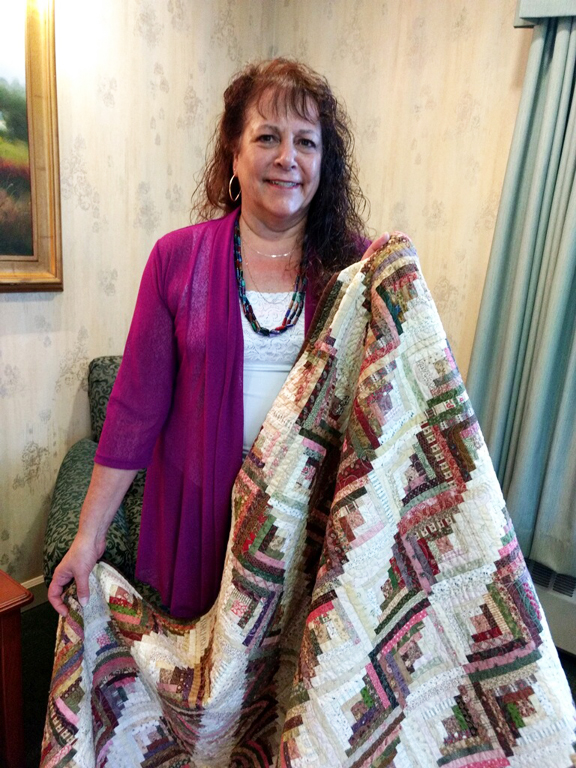 Most, if not all people are passionate about something, even though the passion may not be obvious. Faith Swanson’s passion is displayed throughout her home for all to see.

“I see pieces of my past, pillows, aprons, kid’s aprons, kid’s clothes, curtains,” she says as she looks at “Bow-Dacious”, a quilt she made with leftover fabric. “This is one of my favorites.”

‘“The Old Meets the New’ is what my son named this quilt. The new strips are reproductions of old fabric, thus the name,” she points out when speaking of another quilt.

She tells of two redwork quilts. The first she pieced and quilted for her son, Benjamin, in 1997 after her mother-in-law gave her penny squares that were embroidered by the boy’s great-grandmother, Violet Carlson Swanson in approximately 1930. Redwork is a technique using a single color of thread, usually red, and sewn on white muslin. It was popular because it was less expensive to do with one basic color, rather than have the embroiderer purchase multiple skeins of floss of varying colors. Penny squares were popular in the late 1800s through the early part of the last century. They were quilt blocks which had been stamped with a pattern for embroidering.

The second redwork quilt is made of red and white fabric highlighting her mother, Alberta Remington’s, embroidery work. Each of the 12 squares picture a different kitchen window setting, the way it may look throughout the year. It took Mrs. Remington just one winter to embroider a dozen impeccable squares. Her daughter says that the back of her mother’s work is as pretty as the front, with no bunches or hanging tails of thread. 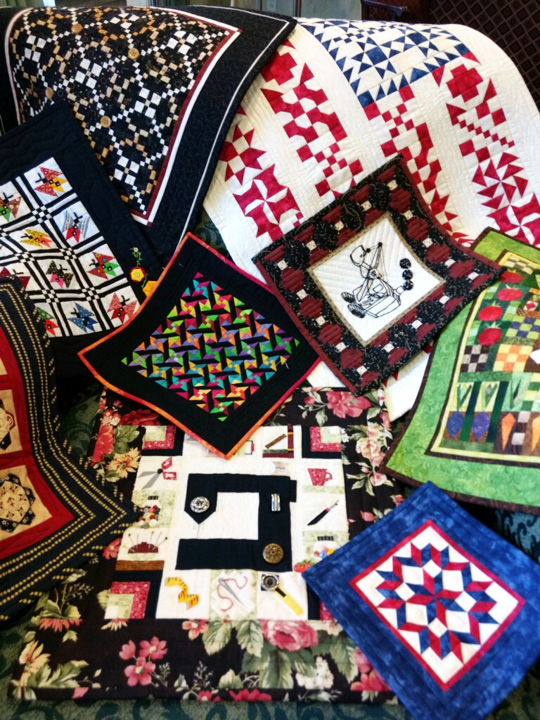 A colorful array of mini-quilts made from tiny pieces of fabric. This Kitchen Window quilt was made by Faith Swanson from redwork squares embroidered by her mother, Alberta Remington. Photo by Beverly Kehe-Rowland

The younger woman learned from the best, because even though her mother prefers embroidering over quilt-making, Mrs. Swanson’s piecework is just as flawless, because she trims excess thread and squares her work as she goes.

“One of the ladies who quilts for me says she likes to quilt mine, because they lay flat.”

She hadn’t found her true passion until she went to a mini-quilt show in Warren, Pennsylvania where she was so fascinated by the tiny pieces that made up the small quilts, she joined a mini-quilt class where monthly challenges were given.

“This is my passion. It truly is,” she says as she handles her mini-quilts made from hundreds of tiny pieces of fabric. “I have been working on a hand project with 3/8-inch pieces.”

She spent 10 years cutting tiny pieces and sewing a snowflake wall-hanging with a technique called paper piecing. Some of her work is embellished with beadwork and embroidery. She admits she is tempted to pick fabric scraps out of the trash because she uses such minute pieces in her work. 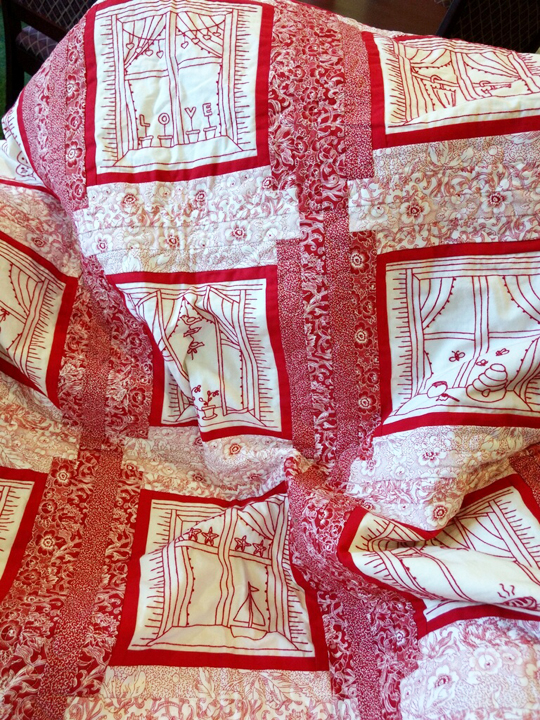 This Kitchen Window quilt was made by Faith Swanson from redwork squares embroidered by her mother, Alberta Remington. Photo by Beverly Kehe-Rowland

“Sometimes I think my fabric multiplies,” she says.

Her mom’s favorite quilt made by her daughter’s hands, is made in the log cabin pattern and consists of 4,080 pieces. The “logs” aren’t the typical size, but that of the width of a pencil.

She has not left out her husband, Mark Swanson, in her quilt-making journey. He is the owner of a “well-loved” quilt made from flannel, which is thread bare from 20 years of wrapping himself in it.

“I’ve learned through the years that a hand-tied quilt is more snuggly and warm. A quilted quilt doesn’t seem as warm to me,” she states.

“I do a lot of my sewing in the morning. The day usually goes better when I have my quiet, Zen time.” 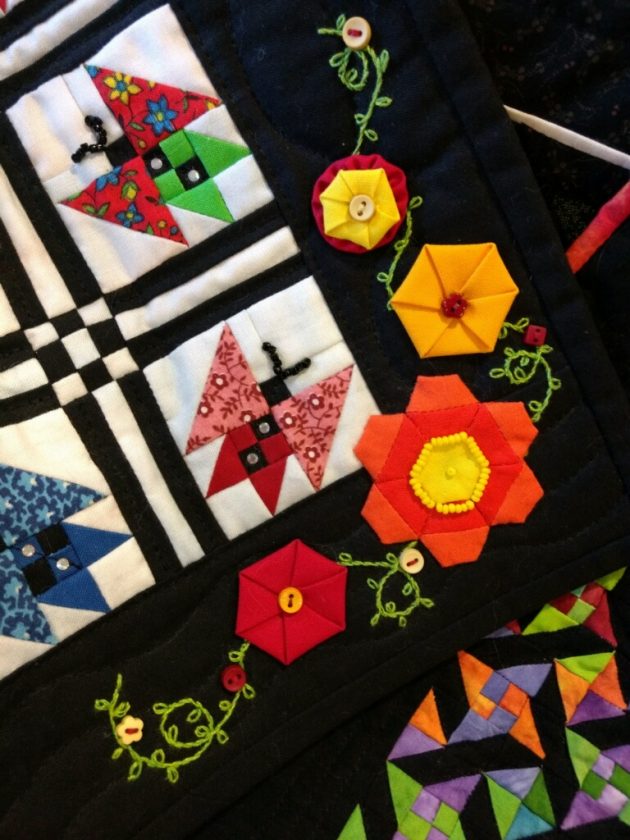 This is a close-up of one of many mini-quilts made by Faith Swanson. The small wall hangings are very time consuming due to the tiny blocks used to construct them. This one is embellished with buttons and beadwork. Photo by Beverly Kehe-Rowland

The family resides in the house that was once her husband’s grandparents’ home. His grandfather, Floyd Swanson, was an artist and worked at the former Pearl City Paint and Glass in his later years.

“That’s why when we married 37 years ago the family home we bought looked similar to a Swedish flag,” she says with a smile. “And yes, we found the formula for the turquoise paint.”

“Kane, where his grandparents had spent a lot of time with family, had a stone quarry so we have turquoise glass embedded into a stone sidewalk.”

Mark is an administrative associate at Hultquist Place. Her responsibilities are managing the front desk, keeping track of the residents’ appointments and arranging transportation for them. She also serves at Vikings Lake Lodge.

She collects both pink elegant and regular Depression glass, which started after she inherited a few pieces of the elegant version. This version was sold in stores and the regular glass was given as a premium. She belongs to Quilter’s Night Out in Warren and to Chautauqua Region Quilt Guild and enjoys attending quilt retreats once or twice each year.

Mark is a toolmaker at Cummins Incorporated. He belongs to Patriot Guard Riders, a group of bikers that does flag lines for veterans and escorts the remains of servicepeople from the airport to the funeral home. They have one son.

Their family is rounded out with a 13-year old Scottie, named Toto, 15-year old Duke, a Maine Coon Cat and a young cat named Bella, who climbs trees. Both cats walk the dog with Swanson.

After deciding which recipes she would submit, she was discouraged by her son to share a few of the choices, as they were her special creations. The readers missed out on her special apple pie recipe, but she feels confident those that made the cut will suffice.

She with her husband named the brownies because when they were enjoying them before a Bills game, a piece fell to the wet pavement. The fat in the brownies caused the water to pull away from the fudgy morsel. She confesses she didn’t want to share the Venison Ham Loaf recipe at a quilt guild pot luck because it was made with venison.

In a bowl, combine the venison, pork, eggs, milk and bread crumbs. Mix well. Pat into a greased 2 1/2-quart casserole, in a saucepan, combine sauce ingredients. Bring to boil over medium heat. Reduce heat and simmer uncovered for 4-5 minutes. Pour over loaf. Bake uncovered at 350 degrees for 60-7- minutes or until browned, basting 2-3 times.

Wash and stem grapes. Squeeze pulp out of grapes, placing pulp into saucepan and place skins into a second saucepan. Simmer green pulp for 20-30 minutes. Run through strainer or sieve to remove seeds. Add pulp to peels and mix. To 2 cups of grape mixture, add sugar and simmer for about 15 minutes. To this filling, add cornstarch, tapioca and lemon juice. Pour mixture into bottom pastry and cover with top crust. Filling freezes very well.

Cream shortening, sugar and vanilla. Add eggs until well combined. Combine soda with milk and set aside. Sift flour with salt and add to shortening mixture, alternating with milk mixture. Drop by spoonfuls on lightly greased sheet and top with a chocolate kiss before baking. The chocolate will not melt, except for the inside with a little crunch on the outside.

1-2 T curry powder or to taste

1 can cream of chicken soup

Preheat oven to 350 degrees. Sprinkle meat with salt and pepper and then brown in frying pan. Mix remaining ingredients and spread over pork chops. Bake 45-60 minutes or until done.