Linda and Paul Macakanja of The Feed Mill and Jenny Lee stand in front of an old horse stall door that separates their two businesses. Photo by Beverly Kehe-Rowland

Bob Astry donated this conveyer belt with attached buckets that was once used to move grain in Thorpe and Mann Mill in South Dayton. Photo by Beverly Kehe-Rowland 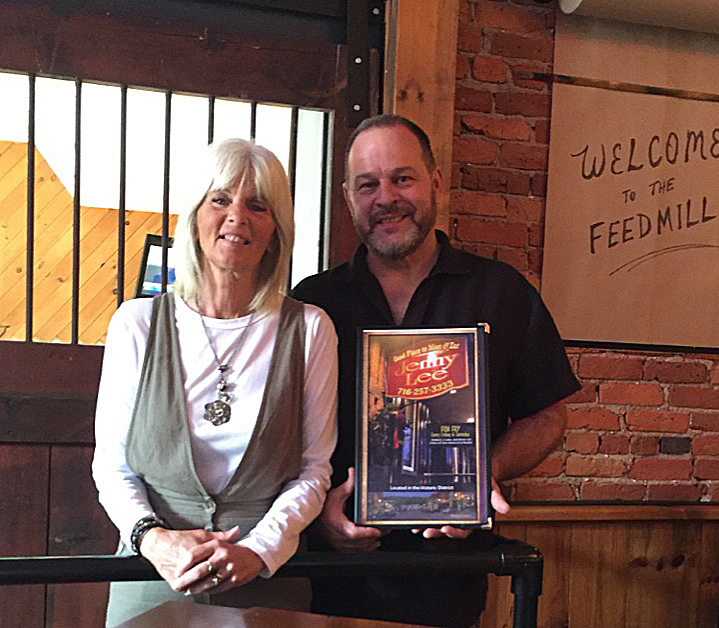 Linda and Paul Macakanja of The Feed Mill and Jenny Lee stand in front of an old horse stall door that separates their two businesses. Photo by Beverly Kehe-Rowland

The brick main street of Cattaraugus resembles a Norman Rockwell painting. Paul and Linda Macakanja are not new to the Main Street business scene, having owned Jenny Lee Diner for 11 years. What is new is their latest addition of The Feed Mill, a restaurant with a unique theme.

“We’re trying to do a tribute to all of the old millworkers and hardworking factory workers,” says Paul Macakanja. “We used to have a mill in our town. Not only do we have a feed mill theme, but we actually have reclaimed materials out of the various mills in the area.”

The hostess station, which stands inside the front door is a 1930s vintage floor model radio. A long, beautiful wooden counter from a general store has been refinished to serve as the bar.

“Paul, the kids and I pulled it up out of the basement in pieces,” said Linda.

“It has been onsite forever,” added her husband. 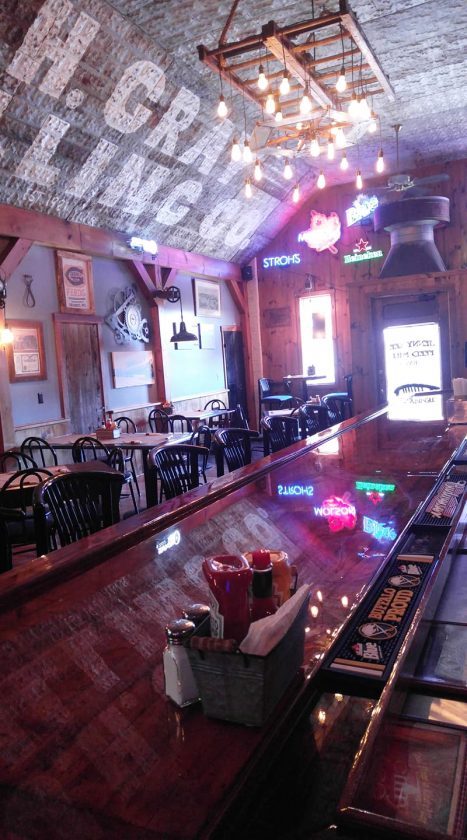 The businessman went through 5,000 square feet of tin from J. H. Gray Milling Company, once located in Little Valley, in an effort to find the original lettering before 1,700 square feet of tin was installed on the ceilings of the restaurant. One of the original 4 feet by 6 feet J. H. Gray signs hangs near the shed-like appendage that serves as a kitchen. A cupola with a blue light has been added to the kitchen roof. A larger cupola is over the restaurant’s entrance, but may go unnoticed until one has had a chance to take in some of the other mill and vintage memorabilia. Flooring from the Little Valley mill covers the floor.

“That flooring has been walked on for over 100 years,” says the businessman.

Numerous pictures of local mills, most of them no longer in operation, and old Cattaraugus businesses cover the walls. An interesting set of pictures of a 1942 Fourth of July parade that took place in Cattaraugus, hang side by side. During the parade, an upper hotel porch collapsed sending its occupants to the ground. It is said the parade kept going, in spite of the accident. The pictures are taken before and after the collapse.

At the end of the bar, near the kitchen, a century old door from a safe that was once housed in Setter Brothers factory, is mounted on the wall.

“I am always on the hunt for artifacts from these old mills,” he says and then goes on to say he is hoping to acquire an Invincible Automatic Magnetic Separator, which was used to remove metal pieces that may have gotten into the grain. 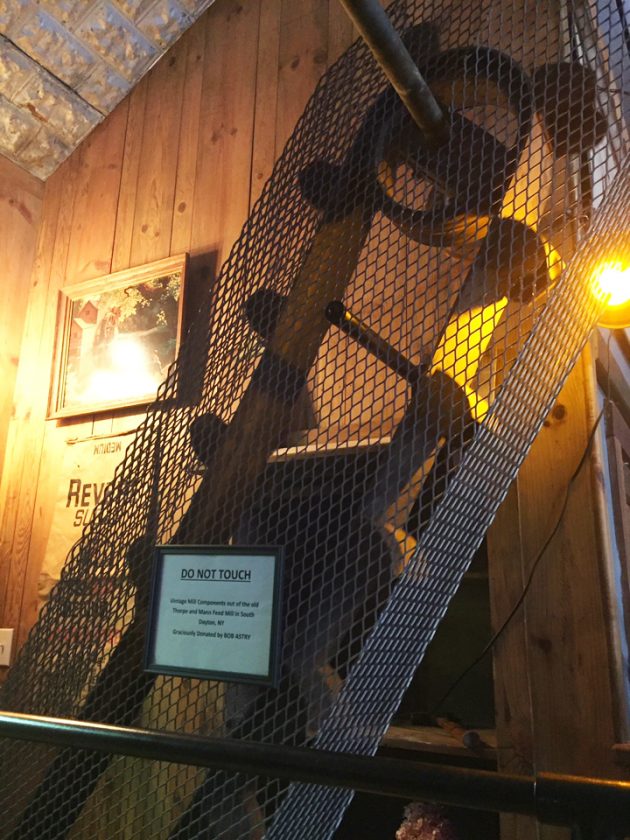 Bob Astry donated this conveyer belt with attached buckets that was once used to move grain in Thorpe and Mann Mill in South Dayton. Photo by Beverly Kehe-Rowland

A conveyor belt with attached feed buckets that once took feed to the top of the Thorpe and Mann Mill in South Dayton operates during business hours. Nearby, The Loading Dock, a small raised floor, serves two purposes.

“Every mill should have a loading dock,” says Macakanja. “People can enjoy a dinner or drink there and on occasion acoustic dinner music is played there. Country music is scheduled for today and Blue Grass/Americana on Oct. 19, both from 7 p.m. until 10 p.m.

A chandelier made from two-1940 fire truck ladders, by Chris Schneider of Angola, is the room’s main light source. An old tractor grill with two headlights, a fixture made from a block and tackle and one from a hay trolley are more of Schneider’s lighting creations.

“We wanted a lot of Edison lighting for ambience and for it to look like you walked into 1930s.”

Three original aprons from James H. Gray Milling, prior to it becoming Gramco, hang over a railing.

The couple carried the vintage theme into the rest rooms as well. Each has an oval copper basin embedded in a wooden barrel with a miniature retro-look pitcher pump water source. The urinal in the men’s room is made from a beer keg.

The Macakanjas operated the South Dayton Jenny Lee from 2003 to 2013. They took over the Cattaraugus operation in 2008 after Mr. Macakanja’s job in quality control, at a shop that made motors and gear boxes for subways cars, came to an unexpected end.

His wife had worked at a bank prior to opening the first business.

“We really had no idea what we were getting into and then all of a sudden I was cooking and running a diner,” she says.

When they first acquired the neighboring building to their second diner, which had served as a church for 25 years, they renovated the façade and roofs, before taking on the interior facelift. Mr. Macakanja framed the kitchen and put up the tin ceiling “but John Miller and his crew get the credit” (for the remodel).

An old horse stall door separates the “Happy Days-like” setting of the Jenny Lee side.

“Parents will give the kids $20 and say ‘go to Jenny Lee’ and they hang out until the game,” says Mrs. Macakanja. “They know it’s a safe, fun atmosphere.”

“We do breakfast on the Jenny Lee side and serve alcohol on The Feed Mill side,” adds her husband.

“I think it’s important for people to know we’ve been in the diner and food business for 16 years. We have experience. We’re not just winging it. If you put emphasis on the quality of food and service, you never really have to worry about your success,” he says confidently but without arrogance, about their newest business that opened Aug. 13.

“One of the things I’m most proud of is that we’ve created eight jobs. We have a chef and several cooks. They wear chefs coats, not tee shirts.”

The couple employs 13 between the two businesses, including one of their daughters.

“One has been with us for 14 years and another for 12,” says Mr. Macakanja. “They are a team. Everybody gets involved.”

“They’re like family,” his wife adds. “Our family is growing.”

Diners are saying the Friday and Saturday fish offering is the best they have had in a long while. Prime rib is available on Saturday. Even though it is not something they like to do, they recommend reservations for parties over six on Friday and Saturday nights.

“By five o’clock on Friday, this place is packed and it stays like that until eight,” he says. “The beer battered, panko breaded and broiled fish comes with two sides and a roll and is $10.99 or $11.99. We sold out on Saturday night.”

A wide roll of butcher paper, which is affixed to the wall, serves as the eating establishment’s special board. Eight beer taps feature domestic and draft-style beer. Several varieties of bottled beer, wine and cider are also served.

“We are told this is like a piece of Ellicottville with Cattaraugus prices,” he says. “It’s a dinky town, but we’re trying to do something exceptional. People are saying it is nice to see cars on the street.”

The Feed Mill is located at 19 North Main Street, Cattaraugus less than 45 minutes from downtown Jamestown. They can be reached at 257-3333 or on Facebook. Hours of operation are 11 a.m.-9 p.m. Tuesday-Thursday, 11 a.m.-11 p.m. Friday and Saturday. The kitchen closes at 9 p.m. Sundays during Bills season noon-6 p.m. Otherwise Sunday and Monday are available for private parties only.

Combine all ingredients. Place in a greased 13-inch by 9-inch pan and bake at 350 degrees until tests done when a toothpick is inserted in the center of cake.

Brown beef in skillet. Drain fat. Add soup, salsa, milk, chips and half of the cheese. Bring to a boil. Reduce heat to simmer and simmer 2 minutes. Remove from heat. Sprinkle with remaining cheese. Cover until cheese melts. Makes 6 servings.

1 tsp garlic powder or up to 4 minced cloves

Combine all ingredients, except chicken. Marinate chicken in mixture. Discard marinade and bake chicken until done. Use same recipe for dressing, plus 1 tsp parsley and 1 tsp sugar.

Put potatoes in kettle and add enough water to cover potatoes. Add bouillon cubes, onion, salt, and pepper. Simmer until potatoes are soft. Add butter and ham. Mix cornstarch with a small amount of cold water and add to chowder. Add milk and bring almost to a boil to thicken, but do not boil! Add corn and hot sauce. Keep at very low heat for about 1 hour.

In a 12-inch nonstick skillet over medium heat, cook bacon pieces 5 to 7 minutes or until crisp. Drain on paper towels; set aside. In large bowl, stir together mayonnaise and sugar. Stir in cauliflower, onion, and bell pepper until vegetables are coated with mayonnaise mixture. Just before serving, stir in cheese. Sprinkle bacon over top.