Changes For The Future

Rails To Trails Works To Provide Natural Conservation In County

Chautauqua County Rails To Trails has re-purposed railroad beds that once served the county from Brocton to Sherman and into Oil City, Pa. Submitted photo

Rails To Trails maintains their trail system through the help of volunteers. Here members are helping to maintain one of the culverts in Brocton. Submitted photo 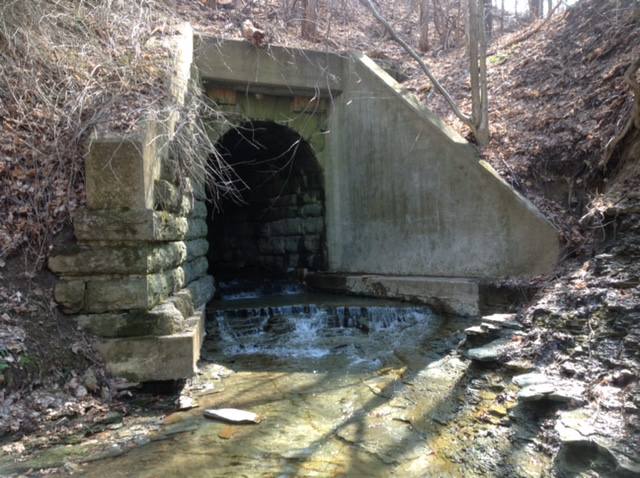 Chautauqua County Rails To Trails has re-purposed railroad beds that once served the county from Brocton to Sherman and into Oil City, Pa. Submitted photo

Originally started in 1991, Chautauqua County Rails To Trails has been working to provide means of natural conservation for the community.

At the same time, the group also tries to preserve trails that once served as crucial points of infrastructure on railroad networks in the United States.

Rails To Trails was originally formed by Dr. Bob Berke and attorney John Goodell. However, CR2T president Jim Fincher refers to Goodell as “the spark-plug” that started the organization.

The reason for this is that Goodell learned the former Pennsylvania Railroad (Pennsy) right-of-way from Brocton to Corry, Pa., and Oil City, Pa., (running through Mayville and Sherman) was for sale.

Previously, the line had been the Chautauqua Branch line run by the Pennsy from the late 19th Century to 1968. It then became the property of the Penn Central railroad (a merger with the Pennsy, its rival: New York Central and the New Haven railroads). Due to financial hardships that plagued the company, Penn Central only lasted eight years and the Chautauqua Branch was abandoned in 1975 (the company’s final full year). 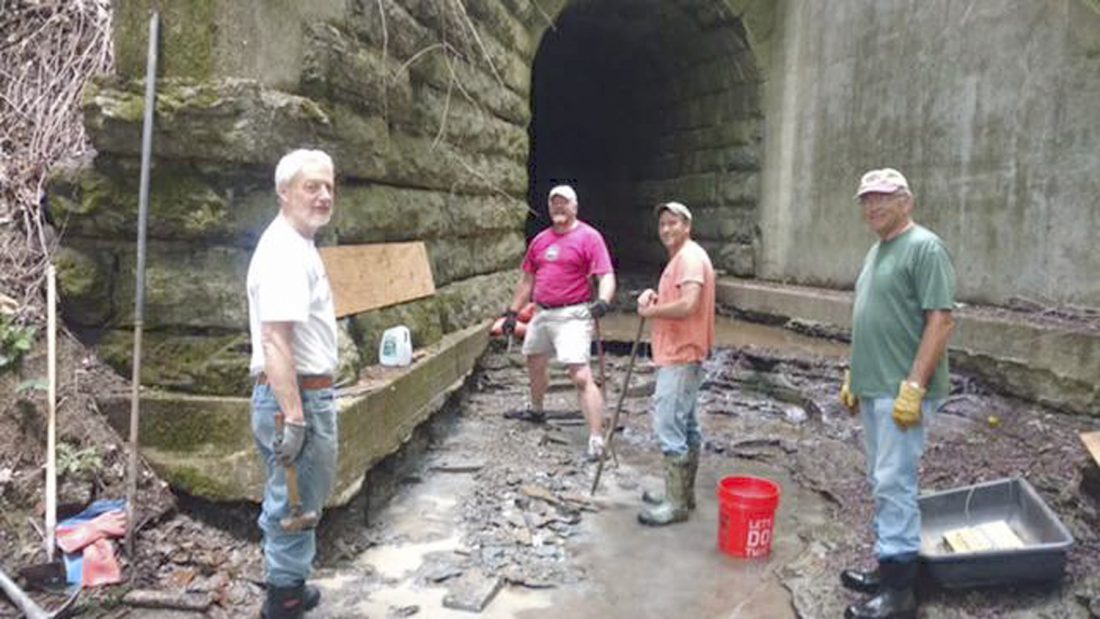 Rails To Trails maintains their trail system through the help of volunteers. Here members are helping to maintain one of the culverts in Brocton. Submitted photo

“He (Goodell) and Berke got two to three others and it snowballed,” Fincher said. “They found some money and brought it.”

By the time Berke and Goodell purchased the property the line had been owned by a holding company. The two managed to purchase the line from Brocton to Sherman. This was in spite of the fact that portions of the route had been broken off in small amounts (including Sherman to the state line) and sold prior to Berke and Goodell’s purchase.

“They developed it from state line into Corry,” Fincher said. 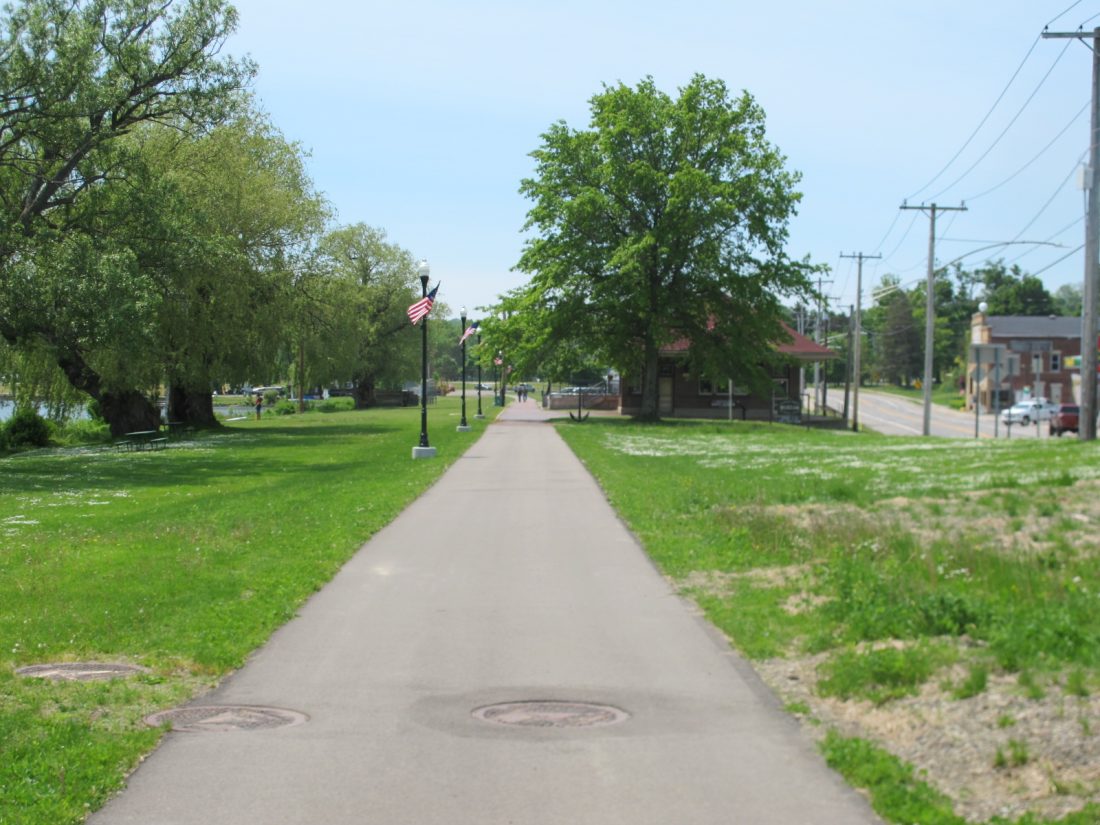 The organization also has a mutual agreement with the owners of the former Jamestown, Westfield and North Western line up to Quillian Road in Westfield as a recreational trail. The JW&NW was formed in 1913 and ran on the east side of Chautauqua Lake via Midway Park before terminating next to the former New York Central depot on English Street in Westfield.

In addition, the organization is part of the Erie to Pittsburgh Trail Alliance, which is working on developing a trail between the two cities. The group also works with various community organizations to meet common goals. Among them are the Chautauqua Lake Snowmobile Club in Mayville and similar organizations.

In 2017, CR2T received a donation from the Western New York and Pennsylvania Railroad of rail wheels welded on rail. Together they form a memorial at Prospect Station commemorating the Christmas Eve 1872 derailment of a Pennsy passenger train that resulted in the death of 20 passengers. The organization also hosts a ceremony every year on the date of the event.

In 2019, CR2T has been making continuous strides and still adheres to its mission of developing trails by placing a surface on them and using them to promote tourism.

“Our main goal is to make it a tourist attraction,” Fincher said.

As with every year, maintenance is a key component to making the system operate smoothly. Fincher said future plans for the organization include adding crushed limestone on a 1 mile section in Mayville. The work would be paid for by a $20,000 state grant acquired by the Westfield Community Foundation. The project will extend from Route 430 to the area behind Boxcar Barney’s in Mayville on West Lake Road.

CR2T is also investigating means and options to replace two stone culverts in Portland that were heavily damaged in the 2015 100-year storm. The culverts are nearly 200 feet apart with one being larger than the other and were both installed by the Pennsy. Fincher said the larger one is 110 feet long, 12 feet tall, 8 feet wide and weigh nearly half a ton. The stones are nearly 100 years old.

“It is made of sandstone blocks. The water gets through and over the years the mortar comes loose from the rocks and the water comes in there. It gets behind the first set of blocks and blows out the second,” Fincher said. “I’ve counted nine of these blocks downstream about 100 yards.”

Along with maintenance comes the need for more volunteers to help maintain the trails.

“We only need two to three (people for maintenance),” Fincher said.

A key project for CR2T is to finish a portion of the Sherman Trail that will be named in honor of Rosemary Billquist.

“Rosie was a very well-known, well-liked individual, actively running, biking etc. which is what you do on a trail,” Fincher said.

Fincher also said CR2T is developing an interactive map on the groups website.

For more information on Chautauqua Rails To Trails visit chaurtt.org, find them on Facebook or call 753-2800.