Amanda and Kris Irwin have recently added a take-out menu to their Westfield Fisheries business in Barcelona. Photo by Beverly Kehe-Rowland

Several generations of area families have driven to Barcelona for smoked fish. Photo by Beverly Kehe-Rowland 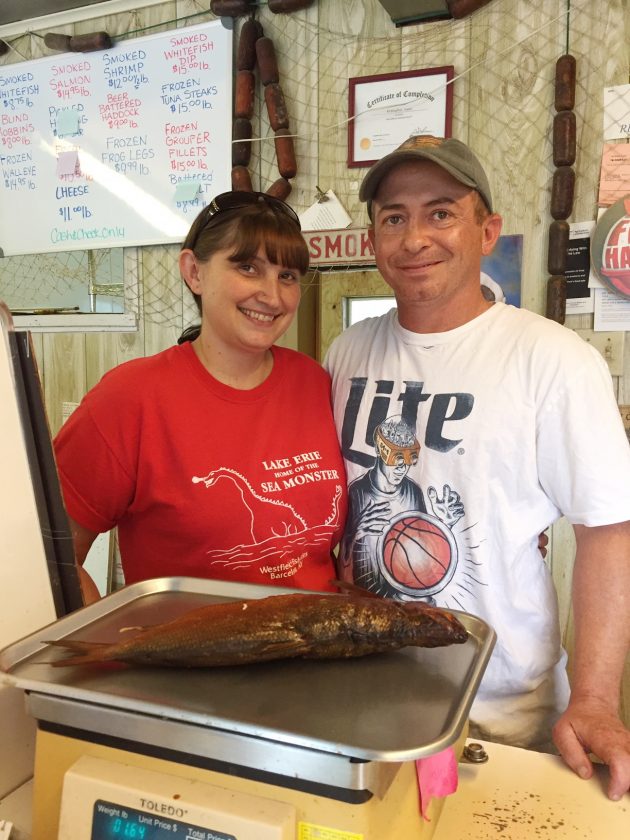 Amanda and Kris Irwin have recently added a take-out menu to their Westfield Fisheries business in Barcelona. Photo by Beverly Kehe-Rowland

Mentioning Barcelona to many people in Chautauqua, Cattaraugus and Warren counties causes them to think of Sunday drives to the shores of Lake Erie. Some may even salivate as they remember eating smoked shrimp in the car on the ride home.

“I’m sure you could find shrimp shells out here because people go to their cars and start eating,” says Kris Irwin, owner of Westfield Fisheries.

Much has stayed the same and there have been many changes since Pike Monroe founded the business in the early 1940s. The same delicious product is still available with the addition of a few others. The original building has seen a few additions. One addition was made for a soft-serve ice cream stand, which sold hot dogs and other “fast” foods at one time. Living quarters were added on the second floor where Irvin and his wife, Amanda, have raised their sons.

“We still get people in their 50s who say they’ve been coming as long as they could remember,” said the 41-year-old man.

He barely got the words out of his mouth when Marcia Laughton Cirbus of Bemus Point stood at the counter saying, “I’ve been coming here since I was a little girl. It’s a terrific family tradition to carry on.” 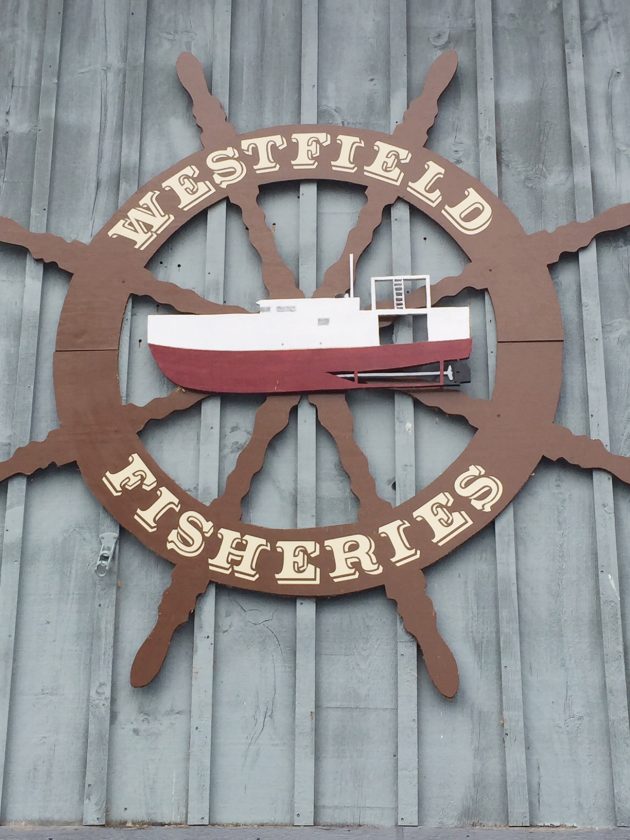 Several generations of area families have driven to Barcelona for smoked fish. Photo by Beverly Kehe-Rowland

Back then, her family made the drive from Cassadaga. Cirbus was buying smoked whitefish on this day.

“I’ve noticed over the last couple of years the age group is getting younger,” says the businessowner. “I think it is because they are thinking healthier and seafood is a lean way of eating.”

Phyllis Joint drove over from Ripley to appease her daughter, Debra Butcher, who was visiting from Chesapeake, Va..

“We have several relatives who want to come here. They probably come for the fish and not to see me,” she chuckled. 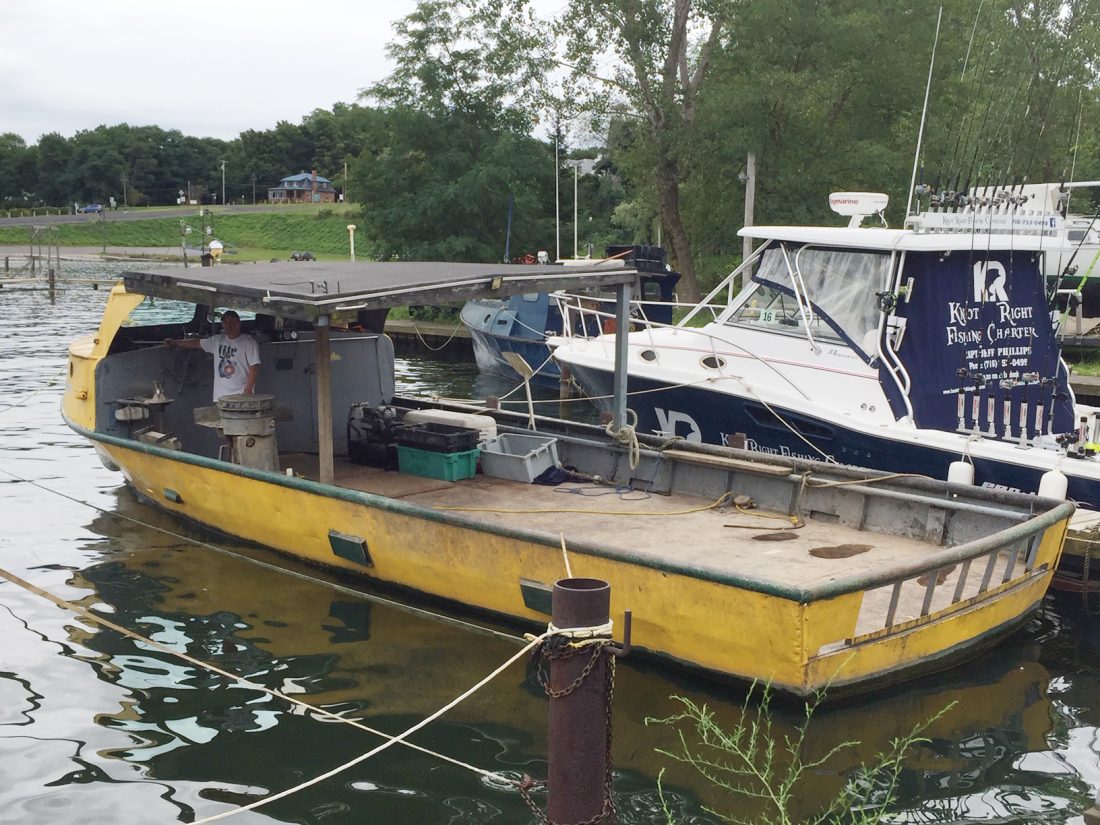 The duo left carrying half of a smoked salmon, a whole whitefish and a half pound of smoked shrimp.

“I’ll be doing good if I get back to Ripley without her eating it,” the mother added.

The owners have recently added a take-out kitchen to the decades old business.

Even though they haven’t advertised, take-out sales have doubled each week since they opened. Grilled burbot, shrimp kebabs, beer-battered haddock dinners and fried or broiled perch or walleye dinners are available Thursday though Saturday.

Irwin has a two-year degree in culinary arts from Mercyhurst College in Erie, Pa. 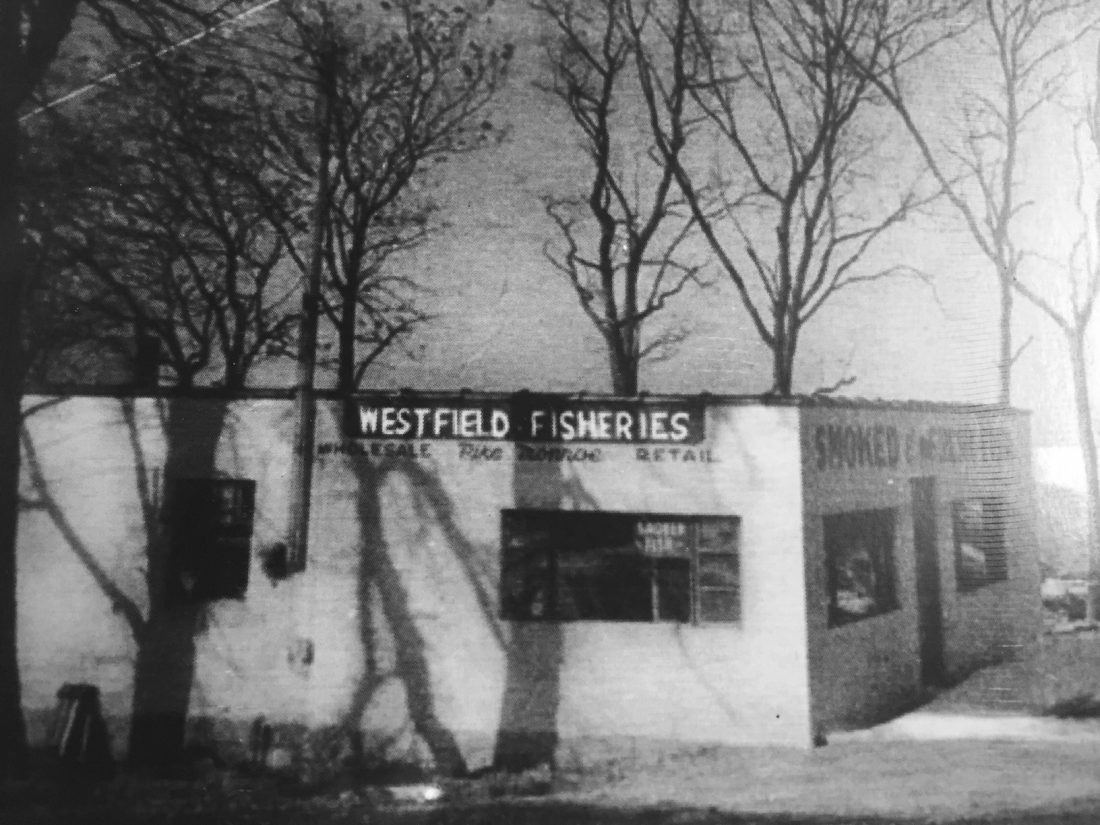 “The best class I ever took was cooking at Giambrone’s in Mayville,” he stated. “When you get thrown to the wolves….”

He prepares all broiled dishes the same as he made at the restaurant and uses the same barbecue sauce recipe but admits he “spices it up a little.” The same honey cinnamon butter is served with rolls. He makes his own crab-macaroni salad. His youngest son, Daryl, is the prep cook and is learning how to do most of the cooking.

“We added a smoked white fish dip last year, which has been a hit. It’s a great cracker spread and I’ve heard of people putting it on bagels. It’s really huge for a dish to pass at Thanksgiving and Christmas,” he says. “We go through a lot of smoked dip.”

It is a three-day process to smoke whitefish and salmon.

“Thawing, brining and smoking each take a day. I usually use 225 pounds of whitefish and 30 to 50 pounds of salmon.”

He smokes about 48 pounds of shrimp at a time using cherry wood and corn cobs in the smoker, as did his father. The corn cobs are supplied by the Amish after they have removed the kernels to use as animal feed.

“They create a sweet, heavy smoke,” he says. “We’ve used them forever. It is unique to this business.”

“On Father’s Day and reunion weekends, we go through 48 pounds of smoked shrimp in a day,” says Irwin.

She and Kaleigh Milliman work at the counter and help in the kitchen.

“All of us do a rotation, help at the counter, in the kitchen and process the fish,” says Mr. Irwin. “We hand-filet our own fresh perch and burbot, a freshwater cod. The state banned gill netting in 1986. My dad fished whitefish, walleye and perch. That was their mainstay. Now we’re not allowed to keep walleye. They’ve made it a sport fish. We still sell it because we order it out of Canada.”

Irwin and his son Tayler each hold a commercial fishing license.

“Mike Ptak and myself have been bringing product to the fish house for about 20 years.”

R.J. Perdue, who has recently retired from the Marine Corps, will be joining them next year. Irwin, who grew up on the lake, takes his 1953 commercial trap net boat out every four to seven days “or when nature allows.” He looks for flat water with less than 1- to 3-foot waves. Daryl and Steve Richards work with him on the boat that is powered by a 200 Horse Power Cummins diesel engine.

The fisherman points out the untrimmed grass growing along the lakefront and tells how it has been left for the filming of “A Quiet Place II.” The suspenseful thriller is in the process of being filmed in several locations in Western New York and Barcelona is getting its turn from Sept. 3-7. Irwin is hoping his business will show up in the movie. In the meantime, his family is ready for any added business the filming may bring this coming week.

Westfield Fisheries is located at 8252 First S., Westfield, N.Y., a 40-minute drive from downtown Jamestown. Travel west on Route 394 to the end of the route, cross over Route 5 and the business is on the left, just before Lake Erie. The store can be reached by calling 326-3210. Hours of operation are Tuesday-Thursday 10 a.m. to 5 p.m., Friday and Saturday 10 a.m. to 7 p.m. and Sunday 10 a.m. to 5 p.m. from the beginning of Lent until Christmas. They are closed on Mondays. Take-out is available Thursday noon to 5 p.m. and Friday and Saturday noon to 7 p.m.

Mix all ingredients together except salmon steaks. Coat top of each salmon steak with 1/4 c of mixture. Press to flatten. saute topping side down until it is golden brown, 3-5 minutes. Flip and then cook other side an additional 3-5 minutes.

In a large skillet over medium heat, cook garlic in olive oil until garlic is golden brown. Add clams and juice to pan. Simmer on low until heated through. Add clams to cooked spaghetti. Top with parmesan cheese.

1 can cream of shrimp soup

1 can small shrimp, drained and rinsed in cold water

Dry fish. Spray lightly with olive oil. Coat fish with 1/2 pkg chili seasoning. Bake in oven at 350 degrees for 30 minutes. Cook all other ingredients on high in a crockpot. When fish is cooked, cut into bitesize pieces and then add to crockpot. Turn to low and cook another 30-45 minutes.

Pour Alfredo sauce into a sauce pan. Peel and cut shrimp into thirds. Add to sauce. Simmer over medium heat until heated through. Add shrimp and sauce to noodles. Top with parmesan cheese.