Local Woman Is Still Using Her Artistic Talents At 93

Lance Zavitz has a friendly conversation with Reverend Billy Graham on the tarmac. Submitted photo.

A picture of Helen Gilbert when she was a young woman. Submitted photo 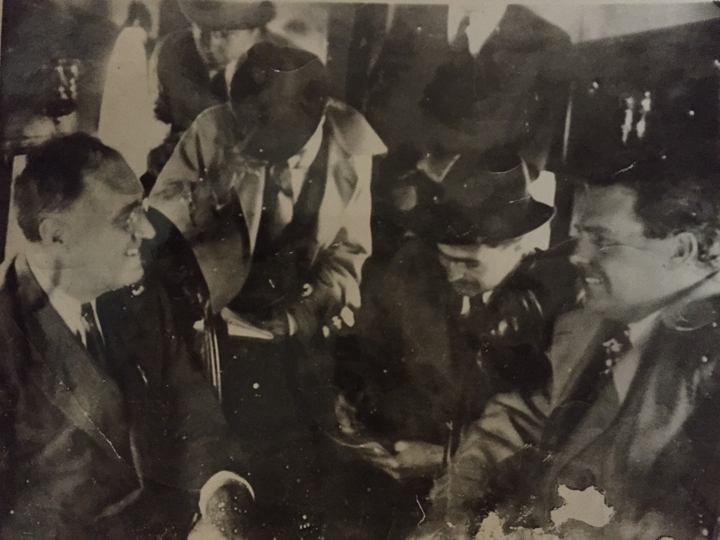 Although she was born in Rochester, she spent most of her childhood in Buffalo and Randolph. Her father, Lance Zavitz, worked for the Buffalo Evening News, now called the Buffalo News, where he worked as a reporter, columnist and editor writing columns, editorials and book reviews. He, also, did a radio show in the 1930s that recapped local, national and international news.

The family owned a summer home near Allegany State Park. When her mother found her asthma was less bothersome when she was in the country, her father bought a house near the Randolph Fish Hatchery.

Zavitz stayed in Buffalo during the week and returned to his family in Randolph from Friday night until Sunday evening at which time he went back to the city. 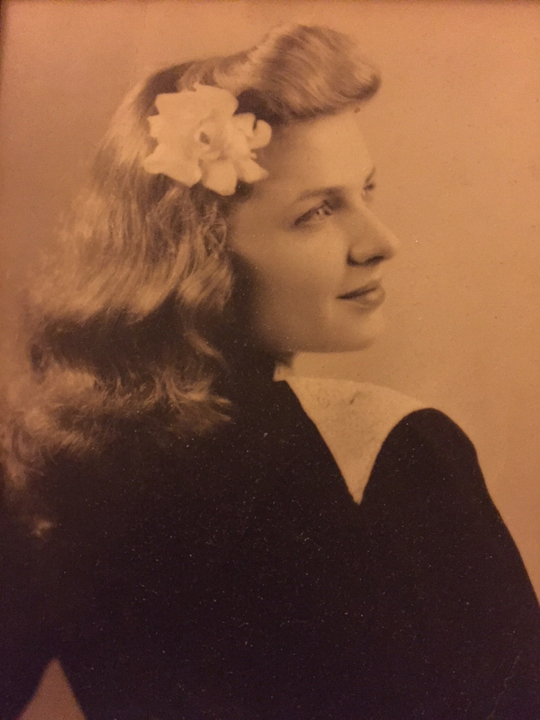 A picture of Helen Gilbert when she was a young woman. Submitted photo

He served as the pastor of the First Congregational Church in Ellington with his wife, Dorothy, taking care of church business during the week while Zavitz was in Buffalo doing his job at the newspaper. He later served as a press agent for evangelist Billy Graham.

Mrs. Gilbert had two older sisters and a younger brother. Her brother sang with the famous conductor, Robert Shaw and was married to the daughter of Bud Collyer, who was the host of popular game shows in the 50s, Beat the Clock and To Tell the Truth. He also played the role of Clark Kent on radio’s Superman.

After she graduated from high school in 1943, she took a job at the Rome Daily Sentinel in Rome, New York. From there she worked as a reporter for the Harrisburg Evening News in Harrisburg, Pa.

“That’s where I met my husband,” she says. “He was from New York City and Albany.” 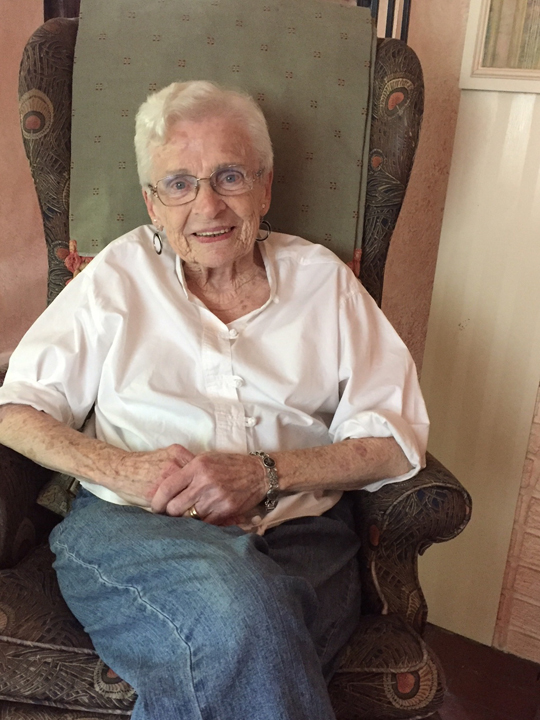 “I had a wonderful husband. Everybody loved him. We had a wonderful marriage,” she shares. “My father got him a job working in circulation at The Buffalo Evening News, even though he really wasn’t that interested. He worked there until retirement.”

For many years the couple lived in a large home in Gerry before retiring to a smaller home in the Jamestown.

The nonagenarian has an abundance of fond memories that take place over the course of her lifetime.

“I remember a spelling contest I won through The Buffalo Evening News and I couldn’t go on to the next round because of the gasoline rationing.”

She tells about roller skating on Friday or Saturday nights. 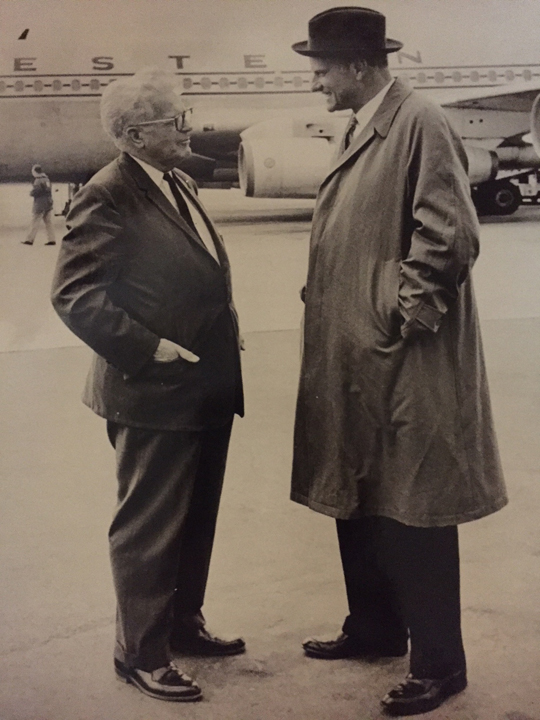 Lance Zavitz has a friendly conversation with Reverend Billy Graham on the tarmac. Submitted photo.

“That was the biggest deal there was.”

One of her high school classes, possibly Home Economics, took care of the little pond in front of the school. She helped paint cement letters which were embedded on the hillside and spelled out Randolph Central School.

“I think the location of the school is so beautiful on that hill.”

The 93-year old is a well-known artist in our area and is still teaching weekly lessons. Her murals can be found throughout the local area, including UPMC Chautauqua, the Lutheran Home and La Scala Restaurant.

She plays piano for her own in enjoyment and considers singing a hobby. She sings with a local choir and in the past sang in Zion Covenant Church’s choir and with the choir at Chautauqua Institution for 20 years. 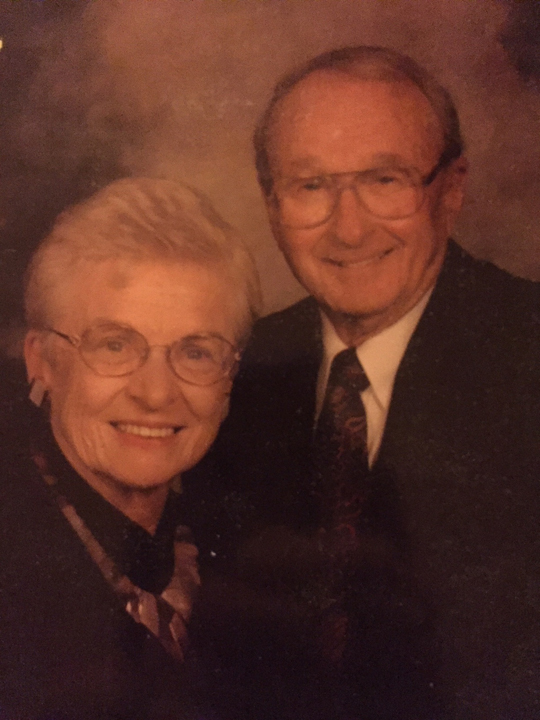 “My husband taught golf lessons at Chautauqua Golf Course. I would park at the golf course and he would drive me to the Amphitheater in a golf cart.”

For many years she did interior decorating with the residents of Chautauqua being some of her customers.

“I did interior decorating at every house on one street,” she recalls. “I have wonderful friends at Chautauqua.”

Her home reflects her taste and her talents as an interior decorator. Perhaps the most interesting area is a wall where she has displayed memories of her lifetime, interspersed with a few items that compliment the rest of the grouping. She has included paintings of each of her daughters on the memory wall and a picture of the home where the family resided in Gerry. There are three painted metal trays, one which Helen and her partner Alice Chamberlain painted and one painted solely by the homeowner. Her grandmother’s framed tiny evening bag, which is barely big enough to hold a handkerchief, and a framed piece of a crazy quilt share the same area.

The importance she places on family shows with the many pictures displayed throughout her living space. She has several well-organized picture albums, which include photos of her father with some of the famous people he was in contact with throughout his years working with the newspaper, including Billy Graham and Franklin Roosevelt.

Kel-Lee was the first of the young girls to become a part of the Gilbert Family. When her new parents heard her speak repeatedly of her friend Koree, who she left behind, they decided to see if Koree could join their family.

The agency doubted they could find the girl, but they did,” says their mother. “Kel-Lee is a better pianist than me and Koree is a much better artist than I am.”

Kel-Lee retired as a “full bird” Army Colonel. The sisters live in Atlanta, Georgia and try to see each other weekly.