Year-round tours and Tea and Tours are available at Lana’s The Little House. Submitted photo

Lana Lewis’ grandparents were born in Greece, but met in the United States before they were married on April 18, 1909. Submitted photo 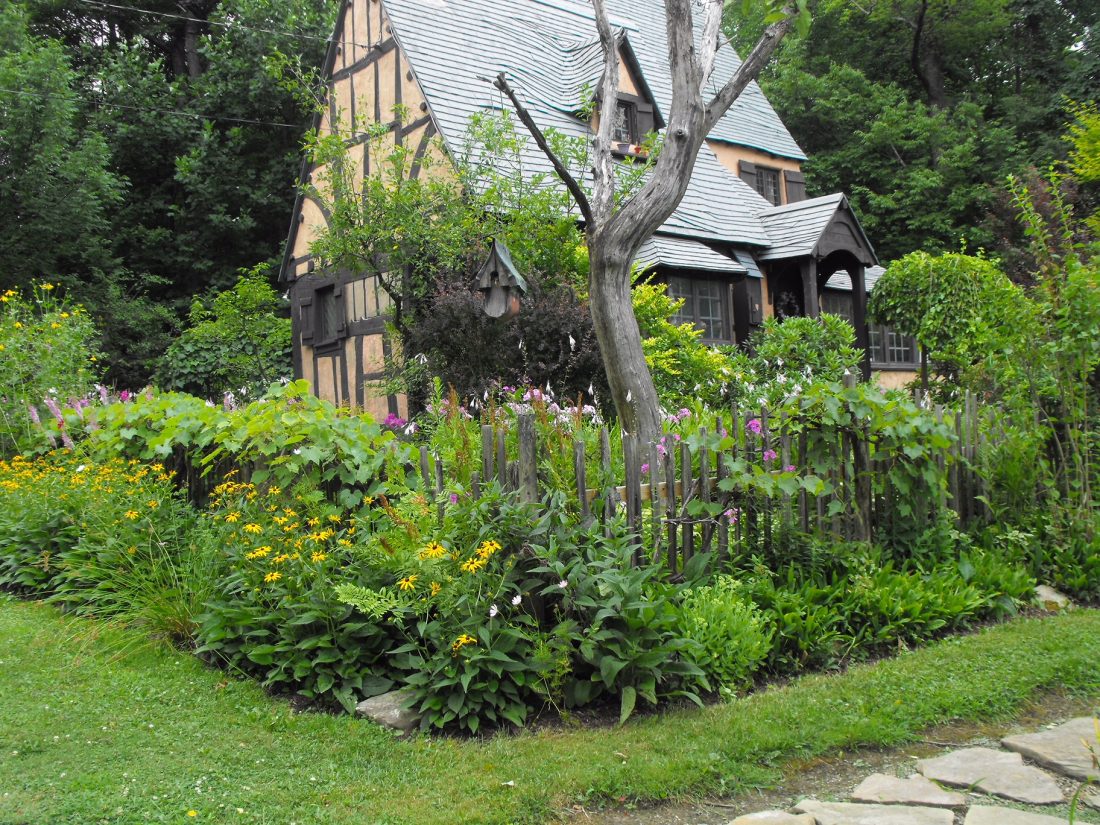 Year-round tours and Tea and Tours are available at Lana's The Little House. Submitted photo

“People ask me ‘what do you do now, Lana’ and I say ‘I make people happy,'” says Lana Lewis. “Every day I wake up and I’m very thankful I live here.”

When Lana relocated from the city to the country, she didn’t expect she would be opening her home to hundreds of new friends. She was born and raised in Eggertsville to a father who was first generation Greek-American and a mother of Welsh descent.

While attending college in Burlington, Vermont, she met the man she would marry. After the wedding, they settled in New York City, where she was hired on her first job. After 12 years, she moved back to where she started in Buffalo. She worked for several companies and lived in many cities over the years, while doing employee benefits consulting. Later she struck out on her own and continued doing consulting work.

After living in several one and two-season climates and realizing she missed the four seasons, she gave her next move serious thought. With Buffalo being her hometown but having grown fond of Madison, Wis. where she had several clients and where she kept an apartment, the two cities went to the top of her short list. After comparing the two, Buffalo won out due to Madison’s very hot summers, very cold winters and higher cost of living.

“I loved Madison, but decided to focus on Buffalo.” 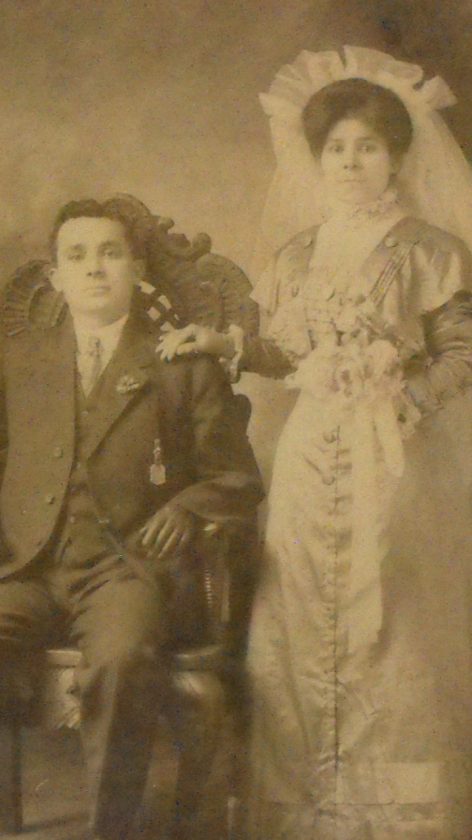 Lana Lewis' grandparents were born in Greece, but met in the United States before they were married on April 18, 1909. Submitted photo

She began looking for houses in Buffalo Business First until she found the one she thought she may like to call home, a house that sounded unique and was located on a beautiful piece of property in Forestville, New York.

“I came out that Sunday for an open house. The realtor had the driveway closed off at the road,” she shares. “I walked down the driveway, saw the house and I broke down and cried. I knew I was going to buy it.”

She moved in on Sept. 10, 2001, the day before the tragedy of 911. She continued to do her consulting business while learning to live in the country.

“I have wonderful neighbors who helped me adjust and learn how to live in the country.”

She soon made new friends and acquaintances in the Fredonia area. 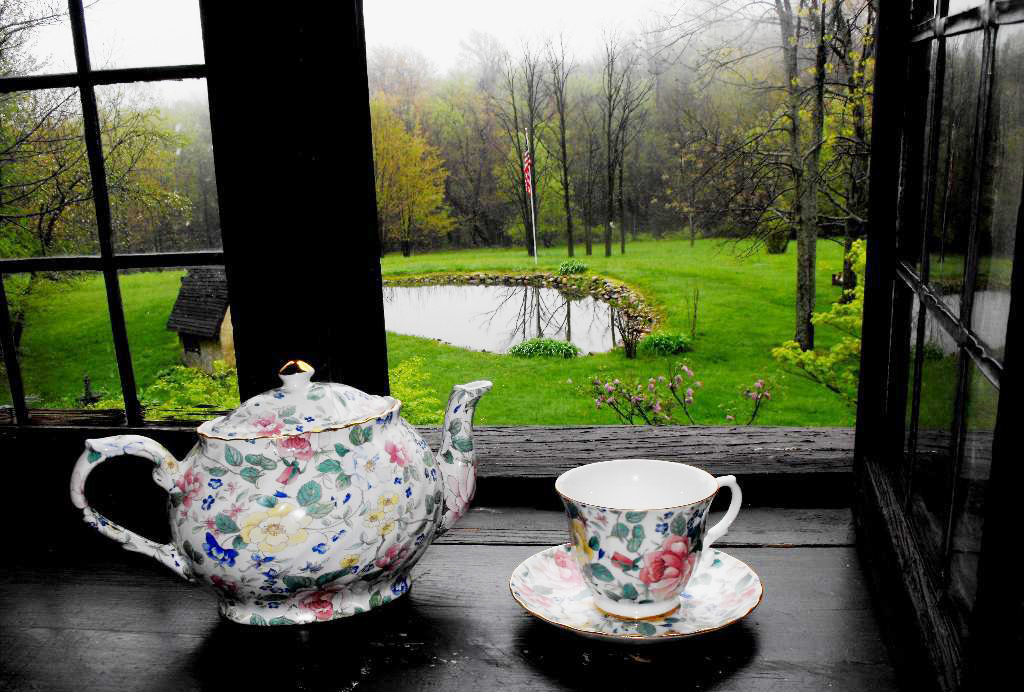 “People started coming to visit, who did not know it (the house) was here. I quickly became inundated with phone calls and visitors,” she says while smiling. “I enjoyed it. It was like Disneyland.”

“People were coming for neighborly visits and The Little House made them happy. I think people were searching for comfort and happiness at that time.”

After 15 months, she decided to stop doing her employer benefits consulting work and turn her home into a business. She spent the first six months of 2003 planning.

“I thought I’d do architecture tours and decided I was going to keep it private and keep the address secret and make it memorable for the visitors.”

She didn’t want to advertise, but have people find her through technology and was certain they would have such a good time they would tell others. Her first inquiry came on June 20, 2003, the day after the website was put up, from three girls from Cleveland who were coming to Chautauqua County for garden tours.

Since opening day June 21, 2003 people have come from near and far, including Bangkok, Dubai, Singapore, Pakistan, India, North Africa, New Zealand and Australia, as well as all across the United States and Canada. She has had many repeat visitors, some as many as 14 times.

“It’s so much fun. I just love meeting these wonderful guests.”

Soon her guests started making suggestions of what she could offer, other than just architecture tours.

She kept a list of the more than 360 suggestions and organized them according to popularity.

“People were begging for a cup of tea. That’s how the tea got started,” she shares.

She always loved the tea experience and would keep an envelope in her desk at work where she would save money for a respite from the stress of her job. When she had enough money saved, she would have her tea experience at Palm Court in New York’s Plaza Hotel.

“I loved the table service, the delicious cup of tea and the dessert.”

After enjoying her respite, she would return to the job and start saving money for the next experience.

“I wanted to bring this experience to The Little House. I was very fortunate to have a great baker and a great teacher to teach me the art of making a great cup of tea.

“I’m not a shopper, but I had shopaholics having panic attacks. That’s how the gift shop got started. They helped me plan the gift shop.”

She started the teas before Thanksgiving of that year and opened the gift shop a year later where over 70 world-class tea blends are sold, along with teaware, tea pots, tea accessories and gifts related to the house, including a beautiful line of stationary that features scenes from the property.

“People would get home, use up their tea and want more. I have wonderful guests and online shoppers. They enjoy that I have over 70 blends of world class tea. I’m very lucky.”

From the beginning she had requests for overnight stays, but at the time, her responsibilities didn’t allow for that. She was able to begin offering overnight lodging on Aug. 1, 2018.

“I really enjoy my lodgers. It’s been a delight,” she says. “I kind of have my own little Chamber of Commerce here. I love to promote Chautauqua County and the Buffalo area.”

What is Lana’s The Little House and why all of the hype? It is a handcrafted storybook, English cottage with surrounding English gardens on 21 wooded acres with a pond. All of the materials, including the timbers for the timber frame stucco house, came from the property. All of the nails were hand-forged in the barn. The craftsmen who built the house brought glass from their travels, cut it at the local hardware and made leaded glass windows with it.

House Beautiful Weekend Homes showcased the quaint house in the early 80s. It has also been featured in several architecture publications. Three men from Hawaii came to the house to study its architecture.

“The house has been loved by everyone who has owned it, the two boys who had a vision and crafted and created this house and the people I bought the house from. The wife had the great talent to decorate and made it look adorable.”

“I was sent here to share it with people because I like to talk and meet strangers and I’m good at sharing it.”

Tours and Tea and Tours at Lana’s The Little House are limited to eight guests and may be made by prepaid reservation only. Photos and information may be seen at www.lanasthelittlehouse.com. It is on Facebook as well.

Although these recipes aren’t served at Lana’s The Little House, Lana shares them today. Yiayia’s Baklava and Yiayia’s Spanakopita were her grandmother Clara Gythio’s recipes and yes, yiayia means grandmother in Greek. Her family served both recipes at Christmas time.

The Choco Chewy Scotch Bars is a recipe she shares around Valentine’s Day.

In a large bowl combine walnuts, sugar, cinnamon, allspice and set aside. Brush a 13-inch by 9-inch by 2-inch baking dish with melted butter. Place filo on table and cover with plastic wrap or wax paper and then place a damp cloth on top of wrap. Work quickly with the filo to avoid drying out. Place 5 or 6 sheets of filo in baking dish, basting each sheet with the melted butter. Add walnut mixture in an even layer. Add an additional 5 or 6 layers of filo, remembering to baste each layer with the melted butter. Be sure to baste the top layer. Score the top layers of filo before baking to make cutting easier. Use the traditional diamond shape or a shape of your choice. Place one whole clove in center of each piece. Bake at 300 degrees for 1 hour or until golden brown. Prepare syrup while baklava is baking. Bring sugar and water to a boil. Add honey and vanilla. Simmer 20 minutes. Pour over baked baklava. For best results, let baklava sit 4-6 hours or overnight at room temperature for the syrup to penetrate and soften the layers. Store at room temperature, covered with a tea towel for 1 to 2 weeks. Remove and discard clove before serving.

Cook and drain spinach and then press out water until spinach is dry. Preheat oven to 375 degrees. In a large bowl combine the spinach, feta, ricotta, dill, parsley and eggs and set aside. Brush 13-inch by 9-inch by 2-inch baking dish with melted butter. Place Filo on table and cover with plastic wrap or wax paper. Cover with damp cloth. Work quickly with the filo to prevent drying out. Place 5 to 6 sheets of filo in pan, basting each sheet with the melted butter. Add spinach mixture in an even layer. Add 5 to 6 more sheets of filo, basting each layer with the butter. Be sure to baste the top layer of filo. Score top layers of filo before baking for easier cutting. Use the traditional diamond shape or shape of your choice. Bake at 375 degrees for 40 minutes or until golden brown.

Preheat oven to 350 degrees. In a large microwave safe bowl, combine the chocolate chips, sweetened condensed milk and 2T melted butter. Microwave on high for 2 minutes or until chocolate chips are melted. Stir well. In a separate large bowl, combine remaining butter, brown sugar, eggs, flour, pecans, coconut, salt and vanilla extract. Stir until thoroughly combined. Spread approximately half of the dough on an ungreased 15-inch by 10-inch jelly roll pan. Drizzle the chocolate mixture over the dough, then drop small spoonfuls of the remaining dough over the chocolate. Gently drag the tip of a paring knife through the dough and chocolate, creating swirl pattern. Bake for 25 to 30 minutes. Let cool for 15 minutes. Cut into squares.