Bob and Kathy Barber of Jamestown have travelled the world annually since 2008. Kathy is wearing a necklace from Nepal. In 2019, the Barbers visited Vietnam and Cambodia. P-J photo by William Mohan

From left Jamestown resident Bob Barber exchanges with a local in Vietnam. During their 2019 trip to Vietnam Bob and wife Kathy met many Vietnamese soldiers who fought in “The American War” (the Vietnamese description of the Vietnam War). Submitted photo

Jamestown couple Bob and Kathy Barber tour the Ankor Wat Complex in Cambodia. This was part of their trip to Cambodia and Vietnam in February. Submitted photo

In their many travels around the world, Bob and Kathy Barber have brought home many souvenirs unique to the regions they have visited. This is an ink and stamp set from China. The writing is the Barbers’ last name in Chinese. P-J photo by William Mohan 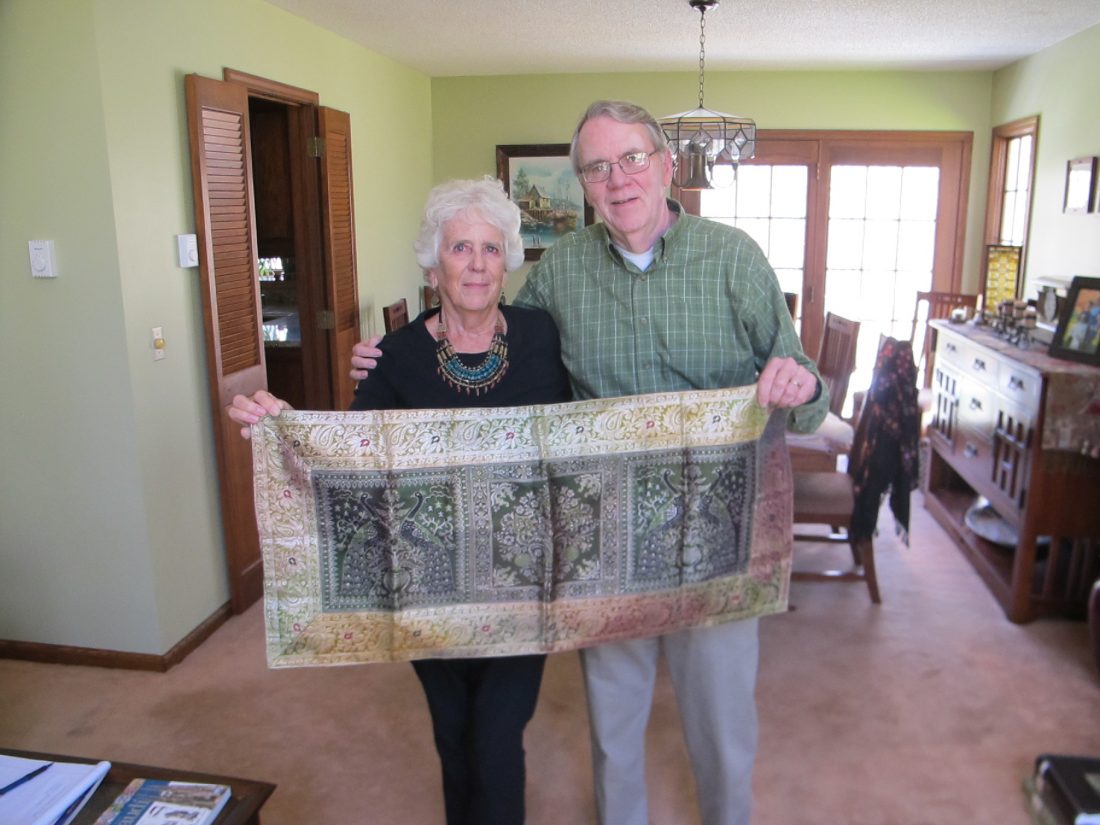 Bob and Kathy Barber of Jamestown have travelled the world annually since 2008. Kathy is wearing a necklace from Nepal. In 2019, the Barbers visited Vietnam and Cambodia. P-J photo by William Mohan

St. Augustine described the world as a book and that failure to travel means only reading one page.

For over a decade, a Jamestown couple has been enjoying retirement internationally from the Americas to Zimbabwe, reading many pages to do so.

Bob and Kathy Barber worked at Jamestown Community College before retiring in 2007. Bob was vice president and dean of administration and early education. Kathy taught English and student success.

In early February, the couple made a trip to Vietnam and Cambodia that included visits to Hanoi, Hue, the Mekong Delta, Saigon, and the Ankor Wat Complex. During that time, the couple rode a boat on the Perfume River, visited the Hanoi Hilton, and toured the Temple of Literature – a sight dedicated to Confucius and Vietnam’s first university.

While Vietnam was their only international trip for this year, the Barbers are always planning where to travel next. At the same time, the couple also plans an annual domestic trip with one of their 11 grandchildren. To date, the Barbers have visited 44 states and more than a dozen countries around the world. 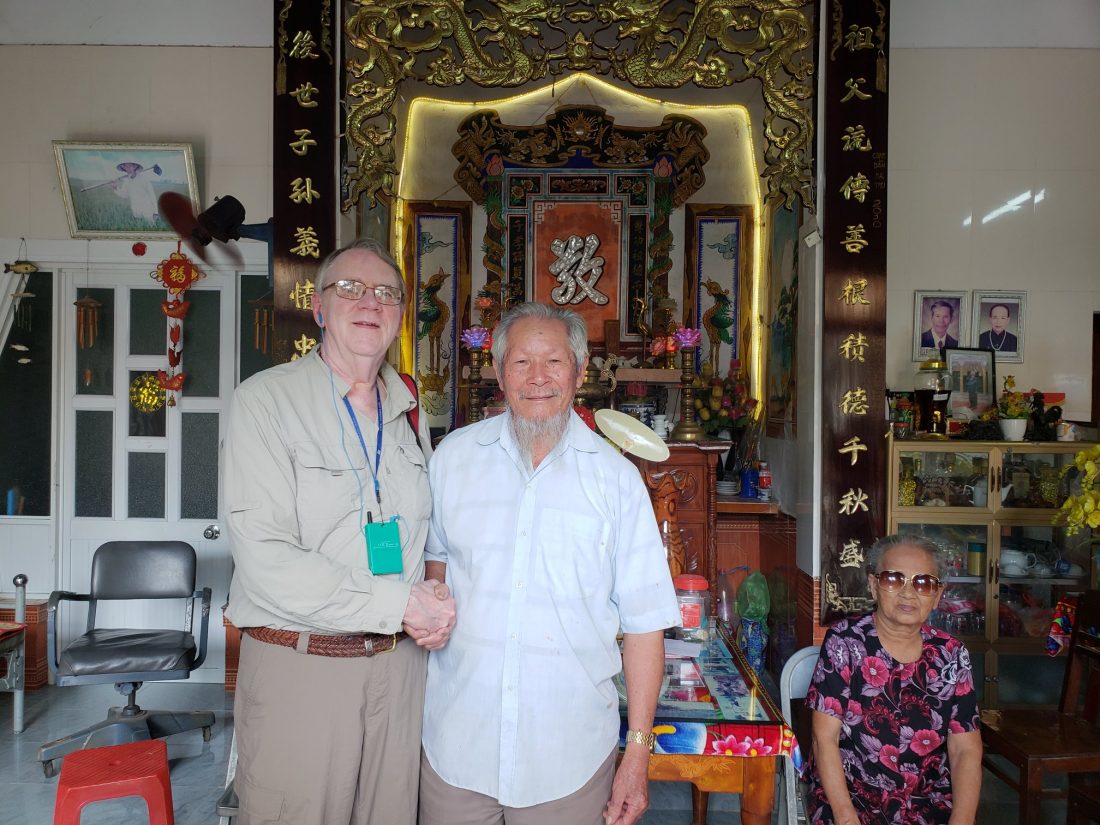 From left Jamestown resident Bob Barber exchanges with a local in Vietnam. During their 2019 trip to Vietnam Bob and wife Kathy met many Vietnamese soldiers who fought in “The American War” (the Vietnamese description of the Vietnam War). Submitted photo

Every year, the Barbers decide what part of the world they want to go to and explore. Since retirement from JCC, they have maintained their ritual annually. Their promptness is something Bob said came with practice.

“We started doing trips domestically before retiring,” he said. “After retiring we started making international trips.”

Since then the couple have visited India, Nepal, Kenya, Tanzania and many other countries across the five continents. Each visit is planned with a specific goal in mind: what animals are migrating as well as the temperature of their destination.

“Our travel depends on the time of year in the area we visit,” he said. “For set seasons we select specific times to visit. We also visit depending on which migratory season would take place and which one would be the most interesting.”

To that end, the Barbers have traveled to countries that experience mild temperatures in winter. Such decisions have been met with a query of responses. 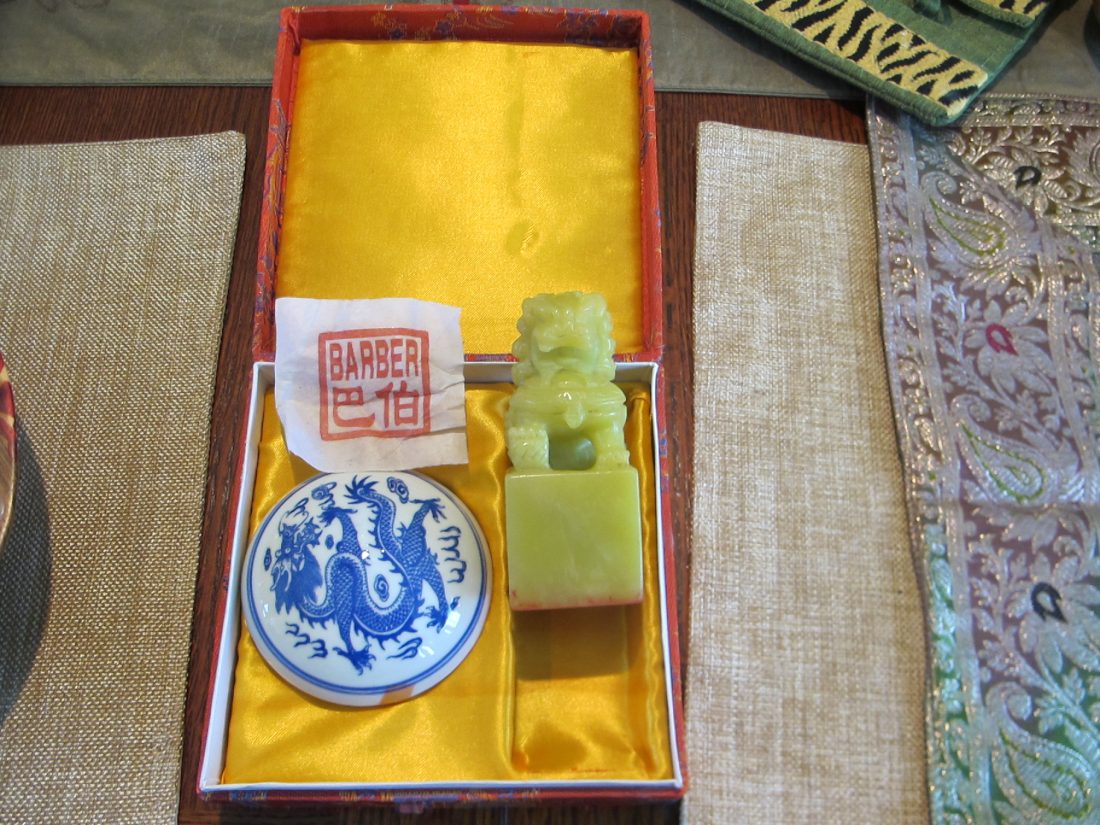 In their many travels around the world, Bob and Kathy Barber have brought home many souvenirs unique to the regions they have visited. This is an ink and stamp set from China. The writing is the Barbers’ last name in Chinese. P-J photo by William Mohan

“People will ask if we know what the temperature is where we’re going and ask are we crazy,” Bob said.

The couple also bases their travel decisions from documentaries. They specifically choose ones on areas that they think will promise an enjoyable trip.

Bob also explained that the couple pursues travel to different locations because it offers its own set of physical challenges. He exemplified this through one of their trips to Africa that required trekking on sand dunes.

“Walking the dunes is demanding because it challenges your mobility,” he said.

When the couple looks for something to remember the trip by, they often don’t look in souvenir shops. 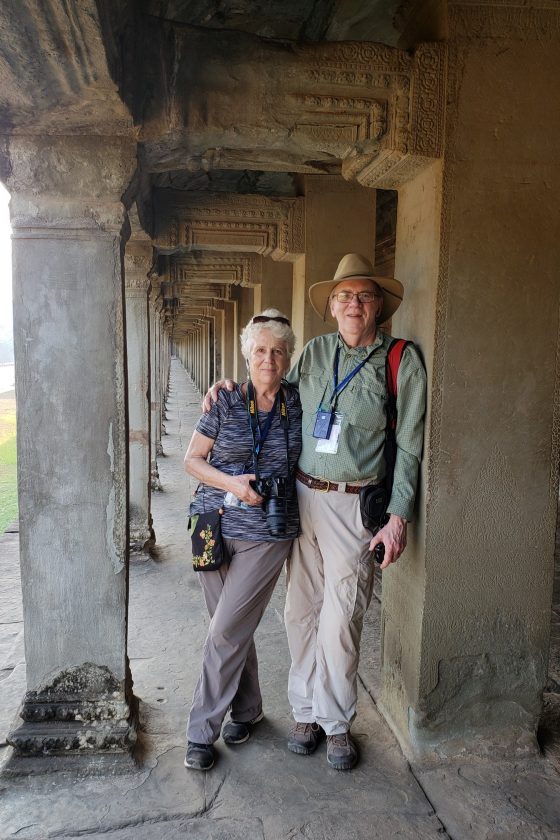 Jamestown couple Bob and Kathy Barber tour the Ankor Wat Complex in Cambodia. This was part of their trip to Cambodia and Vietnam in February. Submitted photo

“We try to come home with something created by locals,” Bob said. “Often it is something we see someone creating, paintings especially.”

He cited paintings the couple purchased in China that were originally created by Aborigines artists.

Some visits have special meaning for the Barbers. In particular, the couple remembers their January 2015 trip to Nepal fondly. They cited the friendly locals and the country’s ancient villages. Their time in Nepal took place three months apart from the Gorkha earthquake that flattened many of the ancient villages they had just visited.

“That broke my heart because we had just been there and they are such friendly people,” Kathy said.

The couple has also visited the sight of the Soweto uprising in South Africa.

The event took place in Soweto, a suburb of Johannesburg. It was triggered by the Bantu Education Act of 1953 that had been passed by the Apartheid government 23 years previously. The act made the language of Afrikaans along with English a mandatory study requirement in South African schools.

On June 16, 1976, nearly 3,000 to 10,000 high school students staged a peaceful protest against the mandate. Initially, the students were to walk the streets towards the Orlando Stadium on the other side of the suburb. In the process of marching, they were met by heavily armed police who used tear gas and live ammunition on the students.

In the end, two students were killed and hundreds more were injured. Of the two murdered students, one rose to international notoriety by photographer Sam Nzima. He took a photograph of student, Hector Pieterson being carried by fellow student Mbuyisa Makhubo through the streets with Hector’s sister Antoinette Sithole alongside them. Today, the photo is part of a memorial to the victims of the uprising.

In 2017, Barbers met Sithole during a trip to South Africa. She still lives in Soweto and now works as a tour guide for a museum dedicated to the event and named in her brother’s honor.

On the same trip, the Barbers also met a person who was a fellow prisoner with Nelson Mandela. They also visited Mandela’s home in Soweto where he and his family lived between 1946 to 1996.

In their many visits around the world, the Barbers said they have received a unique perspective of their home life as well as living conditions abroad. In particular, their trips have opened them to the economic differences in the world. Bob said the difference between America and Kenya and Tanzania is that both countries have mostly dirt roads versus the paved roads in the U.S.

To name an experience that stands out is difficult for the Barbers. For them each one has been unique in their own right.

“It’s hard for me to pick but if I had to choose one it would be Machu Picchu in the morning fog,” Bob said. “It is a magical experience.”

When asked if they gain a particular outlook from their travels the couple said that they earn a unique outlook during their visits.

“You learn so much from other cultures,” Kathy said. “Each one has been so wonderful.”

“You also get to learn how we as Americans are viewed,” Bob said.

He cited the hospitality the couple experienced on their recent trip to Vietnam. Because the United States participated in the Vietnam War, Barber said that the response towards Americans by the Vietnamese is one of open arms.

“They call it the American War, and they are very friendly,” Barber said. “They view us as being saviors and for that they are very grateful.”

When the Barbers are not traveling abroad they are often planning annual trips with each of their grandchildren. When they are at home, Bob enjoys volunteering his time at the Audubon Community Nature Center, golf, walking in the woods and other outdoor activities. Kathy enjoys volunteering at the Genealogy laboratory at the Fenton History Center. Both equally enjoy spending time with their grandchildren.

Lives Lost: At Veterans’ Home, Towering Legacies Of The Dead