These are medals awarded to Ron Pritchard for his service during WWII and the Korean War. Photo by Beverly Kehe-Rowland

This small wooden press was refinished and made into a clock by Ron Pritchard. Photo by Beverly Kehe-Rowland 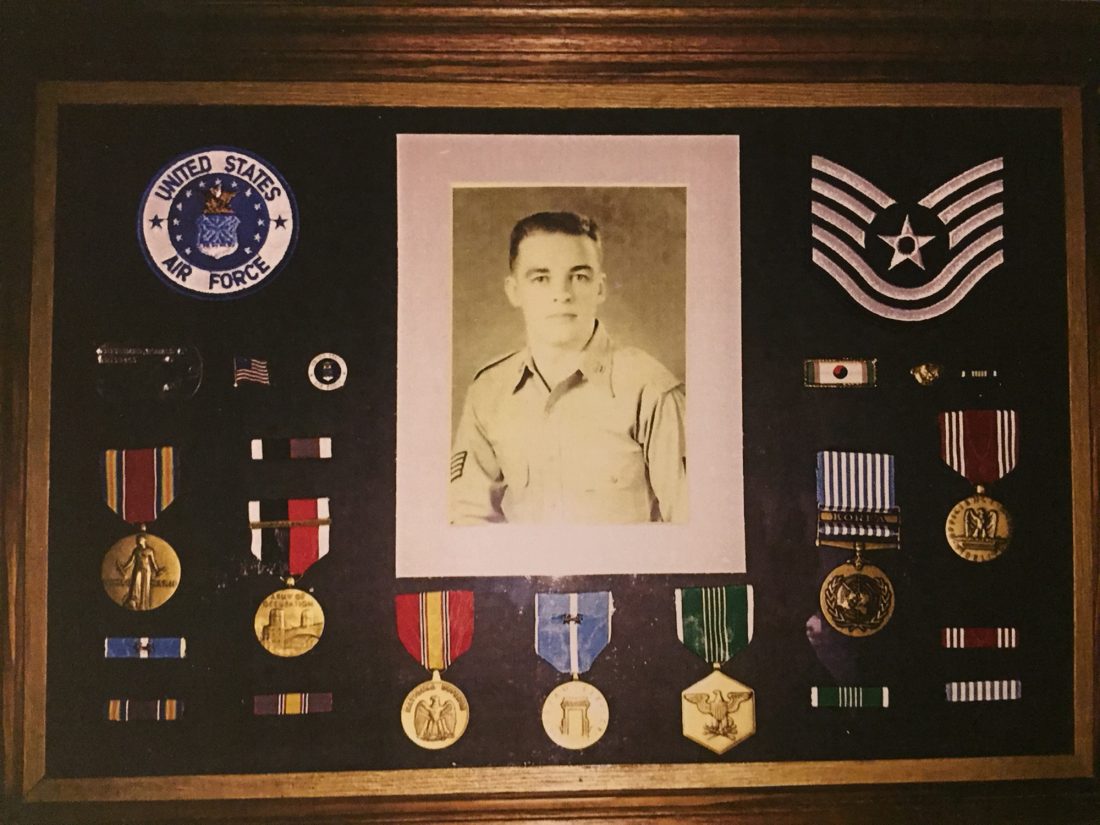 These are medals awarded to Ron Pritchard for his service during WWII and the Korean War. Photo by Beverly Kehe-Rowland

Ron Pritchard and his home are a perfect match.

His interests and the house’s built-ins, nooks and ledges appear to have been made for each other. First impressions, whether indoors or out, coming through the front door or back door, give visitors a cozy, warm, fuzzy feeling. Perennial flower gardens are pleasing to the eye and make passersby wonder about what awaits inside.

A wall display of primitive wooden tools and utensils meets the eye upon entering the backdoor of the house that was built in 1858. To the left is a room that Pritchard took from a dirt floor shed to a respectable workshop, which would be the envy of many men. On the door hangs an attractive wooden sign with brightly-painted cut-outs of a screwdriver, saw, hammer and wood plane that are bordered with the words “Ron’s Workshop,” made by Pritchard’s grandson.

Across from the workshop is the kitchen. The area above the counter displays a double row of antique white ironstone dishes, a perfect accent to the light grey-blue wallcovering. Several interesting pieces are found in the room with one being a shallow spice cabinet hung over a primitive wooden cabinet. The upper cabinet was made when the current owner attached a pair of exterior wooden shutters to a window frame, pieces that were once part of the home.

“He can look at something and knows what should be done,” says his wife, Marcia Pritchard. 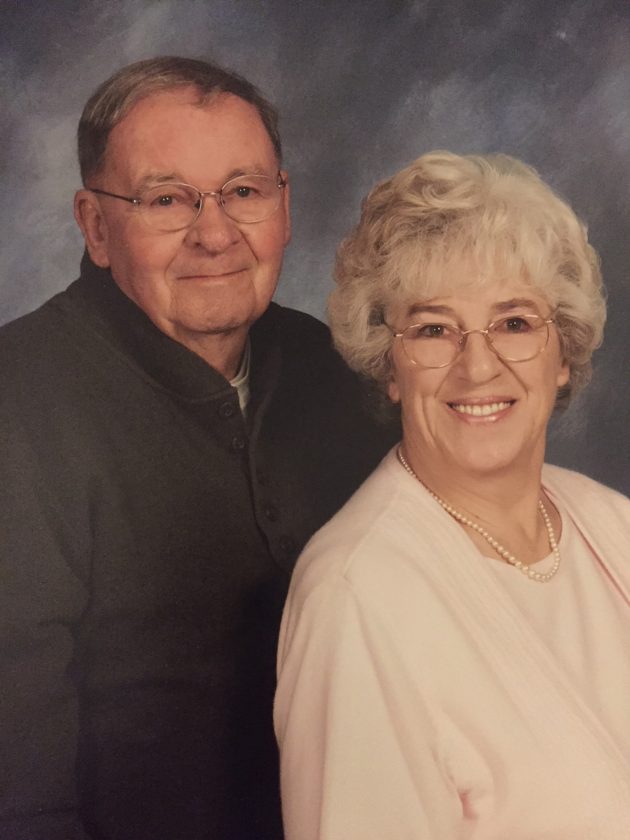 On a nearby wall hangs another of his completed projects, a wall clock that has been encased in a little wooden press topped with a finial. Around the corner in the dining room, atop a built-in cabinet stands a row of small cranberry-colored glasses, each one different from the next. More are displayed in another room.

“They put gold in the batch when they make it and that’s what makes the cranberry color,” said the 91-year-old man.

His wife’s demitasse spoon collection is displayed in the same room and his great-great grandmother’s sampler, which was stitched in 1834, hangs in the living room.

Each room has numerous groups, collections, prints and paintings, and special pieces causing the eye not to know where to look next. A comfortable, homey feeling washes over as one takes in the tastefully displayed pieces. Many are recognizable and some are uniquely different. Both Pritchard and his wife, Marcia, gladly explain the use, history and other interesting information, but a few items remain a mystery to the homeowners.

The talented man has a passion for all things wood, especially old wooden items. He has refinished many pieces. One being a Coats and Clark thread display case. The cabinet had been painted gray and used to store mechanics tools before the craftsman found it at a lawn sale. It is now displayed in the Pritchard home, since it has been lovingly restored to its original beauty. 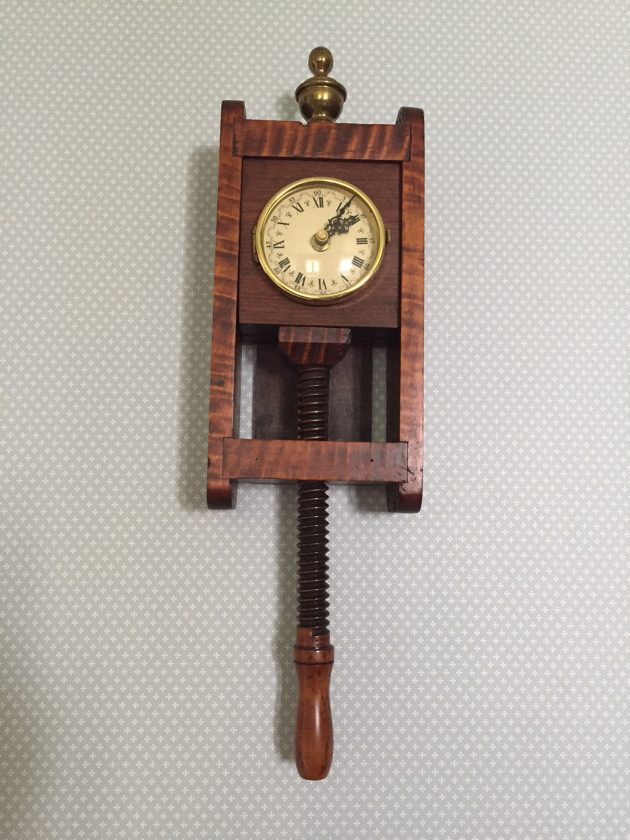 This small wooden press was refinished and made into a clock by Ron Pritchard. Photo by Beverly Kehe-Rowland

Amazingly, there is no hint of pink paint that once covered a beautiful bureau with stepped back upper drawers, which is located in a bedroom. No trace of the former color can be found in crevices, along drawer openings, around the wooden handles or hidden amongst the woodgrain. Pritchard says he has used a lot of homemade tobacco stain over the years, which is evidenced in the many pieces with the warm, rich color found throughout the home.

“It’s a passion with him. It’s like art,” says his wife as she points out a tavern table from the 1700s, a piece that has been redone, but still shows wear from many years of use. A three-times altered TV cabinet, which he made from shutters, is one of those pieces.

The caning and shaker weaving found on chairs in the living room were done by his hands.

In a room with a vintage bathtub with an interesting covered exterior drain, he has attached an old wooden door to the side of a fiberglass shower stall in order to take away its modern appearance.

The Randolph man’s life wasn’t always about sitting back and enjoying his hobbies. Like all who grew up during The Great Depression, he knew hardship, hard work, poverty and war, but plowed through it because that’s what it took to survive and have a better life.

When he was a child of six, he lost his 33-year-old father due to a ruptured appendix, leaving a wife and six children to survive in this difficult period in history. Pritchard remembers picking berries to sell for twenty-five cents per quart.

His mother planted a large garden and fed her children whatever she could to keep their bellies full, including squirrel pot pie, which her son says was “very good.”

He grew up in New Albion, near Little Valley where he attended a two-room schoolhouse until the eighth grade. His high school education took place in the village of Cattaraugus with him graduating in 1945. During those years, he walked a mile before school to milk cows for a farmer and get back home in time to catch the school bus. He, along with one of his three brothers, did haying for another farmer. One of his brothers worked at a clothing store.

Shortly after graduation, he enlisted in the Army Air Corps. After basic training at Lackland Air Force Base he went to Okinawa, Japan and was discharged a year and a half later. He reenlisted in 1951 during the United States involvement in the Korean War, this time in the Air Force.

“There was a war on and I wasn’t tied down, so I went back in for four years.”

He was stationed at Otis Air Force Base in Massachusetts, where he hitchhiked home on weekends.

“You could get a ride if you were wearing a uniform. I remember once when I caught a ride just outside of Buffalo and he took me all the way to Boston and bought me dinner besides.”

After spending a year at Otis, he was sent back to Japan for 30 months. From there he was stationed in Texas at Bryant Air Force Base until discharge.

“In Japan, I was with the 374th Troop Carrier Group. We flew troops to Korea primarily,” he says. “The worst accident in aviation history, at that time, took place when a plane came down just off the runway at Tachikawa, when 108 troops were lost.”

He retired as a Tech Sergeant. A frame holding his medals, along with a picture of the soldier, hang on a wall in the home.

“Anyone who has been in the service got the same things,” says the modest man about his awards which include Army Commendation, Good Conduct, World War II Victory, Army of Occupation with Japan clasp, National Defense Service, Korean Service with 2 bronze service stars, United Nations Service and Honorable Service Lapel Button WWII.

In October he went on a Buffalo-Niagara Honor Flight when he was taken to Buffalo to spend the night in a hotel. That is part of the night, as he had to rise at 2:30 a.m. to take a bus to the airport in order to board a plane headed to Baltimore, Md.

“They had a very large reception that would bring tears to your eyes. The people were lined-up along the highways. Police escorted the two buses,” he recalls. “We toured all of the memorials and went to Arlington Cemetery where we saw the changing of the guard.”

He went on to tell about being treated to dinner at the Knights of Columbus where the veterans received letters written by family members and some school children. A large crowd welcomed the buses when they returned to the airport. One woman handed him a card and a giant chocolate bar.

Aside from the days of his youth, when he worked for local farmers, he began his working years as an apprentice electrician for a few years before taking over the business when the owner relocated. From there he worked for his brother Gerard at Pritchard Hardware in Cattaraugus while working part-time at the post office in Little Valley. After he was hired to a full-time position in the post office, he continued working part-time as an electrician. He was appointed Postmaster in 1979, retired in 1990 and moved to his current home in East Randolph.

The couple has made a very thick album which contains genealogy and photos of their ancestors. His ancestors came from Wales in 1635, settled in Milford, Connecticut, but have gradually migrated west.

“We love history and genealogy,” says the wife. “We’ve been to just about every cemetery in New England.”

Glass negatives found in their barn dating back to 1900, allow them to enjoy the history of the family who owned their house for 100 years.

Mr. Pritchard has four children. Penny lives in South Carolina, Paige in Pennsylvania, Patti in Georgia and Adam lives in Michigan. Mrs. Pritchard’s sons Steven Carr lives in Massachusetts and Robert Carr in Tennessee. They have 14 grandchildren and 16 great-grandchildren. They are very proud of all of their children and mention that Robert spent 19 years in the Army. The Honorable Joan L. Larsen, United States Court of Appeals for the Sixth Circuit is their daughter-in-law.

Mr. Pritchard still attends his home town’s alumni reunion where, for the last three years, he has received the prize for being the oldest man in attendance. He enjoys watching birds eating from feeders hung outside a sunroom, which contains the original, small paned, wavy glass windows.

He is a member of American Legion and Veterans of Foreign Wars. They attend East Randolph United Methodist Church.