CMoG Helps With ‘Blown Away’ Show 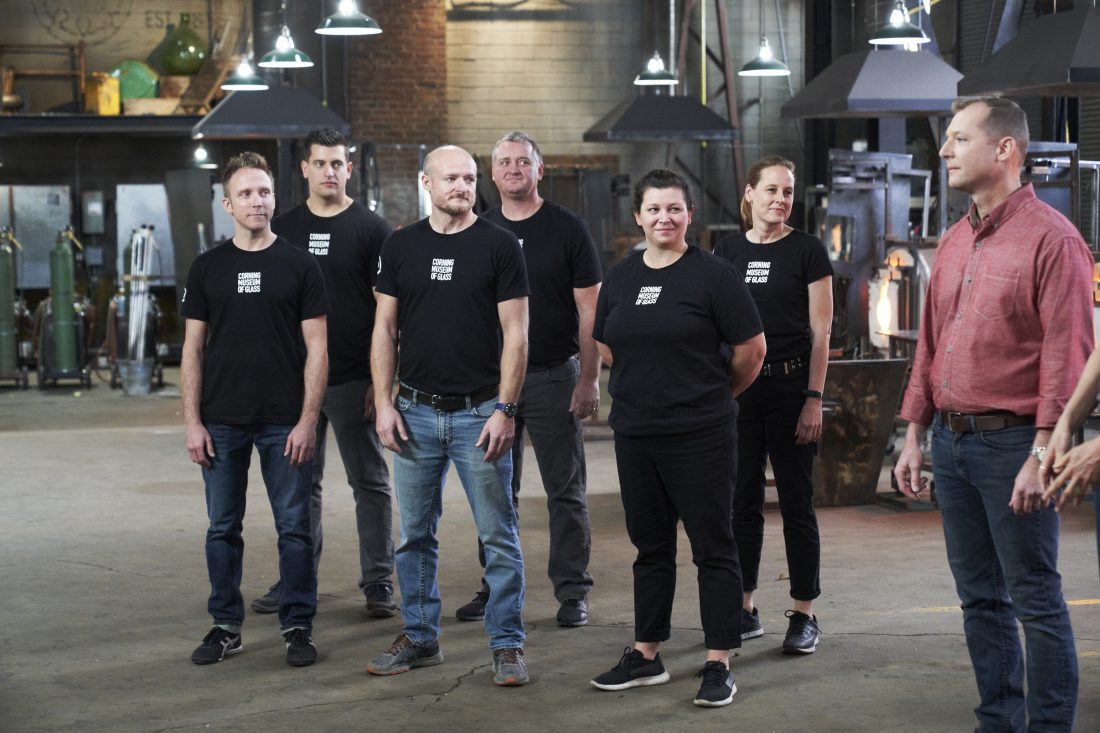 CORNING — Over 150 years ago, a group of glassmakers picked up and moved their glass shop from Brooklyn to Corning and started one of the most recognizable names in the industry. Now, the archive of the company, the Corning Museum of Glass, is being introduced on an international stage as a part of a new Netflix competition series called “Blown Away.”

Similar shows have entertained audiences in crafting blades, even in cooking. This is the first to pit 10 glass blowers against each other to vie for the title of top glass blower, and have their talents on display in the Southern Tier of New York.

“The Museum of Glass was approached by the production company in mid August of last year,” Eric Meek, Senior Manager of Hot Glass Programs at the museum and the “guest evaluator” for the series finals, said. “They wanted to add us on for the technical expertise and to offer that trusted adviser and reputation to the contest.”

The museum also kicked in to give the winner a bit more of a sweet pot. The glass blower deemed to be the best will be demonstrating their skill at the museum this October in residence. The winner was scheduled to be in action at the museum for working session July 17-18 and Aug. 28-29. Corning Museum of Glass will also have a display over the summer called Blown Away: Glass Blowing comes to Netflix. The display will chronicle the journey from the point the museum was asked to be a part to the finale. Pieces from each competitor will be on display with a timeline of the show.

“Blown Away” will feature 10 glass-blowing artisans of differing skills and techniques over the course of the season. They will all work together in the same hot studio,crafting their art to meet specific challenges throughout the season. At the end of each 30-minute episode, once contestant will be eliminated until one is crowned “Best in Blow.”

The size of the hot studio needed presented a challenge and has prevented similar shows from happening, Meek said.

“We have been approached by other production companies that wanted to develop similar concepts and use our facility,” he said. “The issue is that we are not a factory and are set up as demonstration and teaching space.

“The facility they created doesn’t exist anywhere else in North America,” he continued. “It is really the only place you can have 10 people simultaneously work on their pieces.”

The show has been set up for the glass artist and the general viewer to enjoy the same. Meek said the show developed into something he truly was not expecting.

“I thought the show was going to be based around skill and technical ability,” he said.

“It became more about their response and the intellectual challenge of the show. It was more about the artists’ thoughts and ideas that went into creating their pieces of art. It took a path I did not expect.”

Meek said he and the Corning team that worked on the show as advisers really went into it with the hope that people will see glass in a new light and appreciate it in a different way.

“Worldwide reach doesn’t come along every day,” Meek said. “We are very excited about this.”

The show started streaming to Netflix July 12 and will be available across the entirety of the Netflix system.

That translates to 190 countries and into 29 languages.