The restaurant is decorated with pictures the Rodriguez Family brought from Mexico. Photo by Beverly Kehe-Rowland

Father and son Jose and Luis Rodriguez team up with their wife and mother, Maria Cervantes at Azteca Mexican Diner located at 332 West Main Street in Falconer. Photo by Beverly Kehe-Rowland 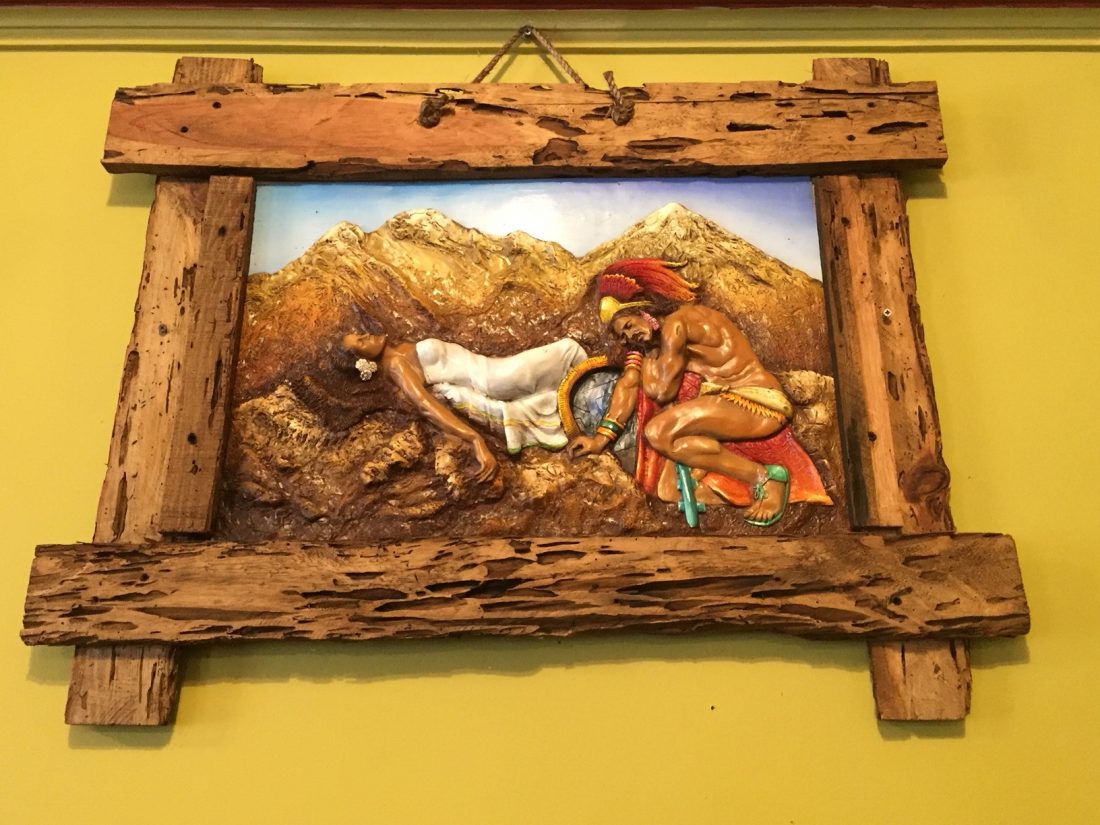 The restaurant is decorated with pictures the Rodriguez Family brought from Mexico. Photo by Beverly Kehe-Rowland

When Jose Rodriguez left Guanajuato, Mexico in 2001, he was in search of better job opportunities, better pay and a better life for his family. While living in his native land, he had worked with his father making mud bricks for construction.

“The process takes one month. Two people make 80,000 bricks per month,” he says by way of his son Luis, who translated for him. “All is well unless Mother Nature rains down on them (before they are dry). Then they are destroyed.”

The process starts with digging the dirt. Water and minerals are added, the mixture is combined until the consistency is right, the mud is poured into sets of rectangular molds and are then set in the sun to dry. Occasionally, a fire is started to help with the drying process. When the bricks are nearly dry, they are sanded to remove rough edges and are then stacked in a criss-cross pattern.

If business was slow or weather did not cooperate, there were days when the hard-working father and son had nothing more than a piece of pepper for their meal. The eldest Rodriguez worked at this strenuous work until he was 70-years old, a total of 40 years.

Jose tells about a sad time when his little brother was working with the duo. It was a clear day with no clouds in the sky and with no warning, a bolt of lightning, the first bolt, struck and killed the young boy. 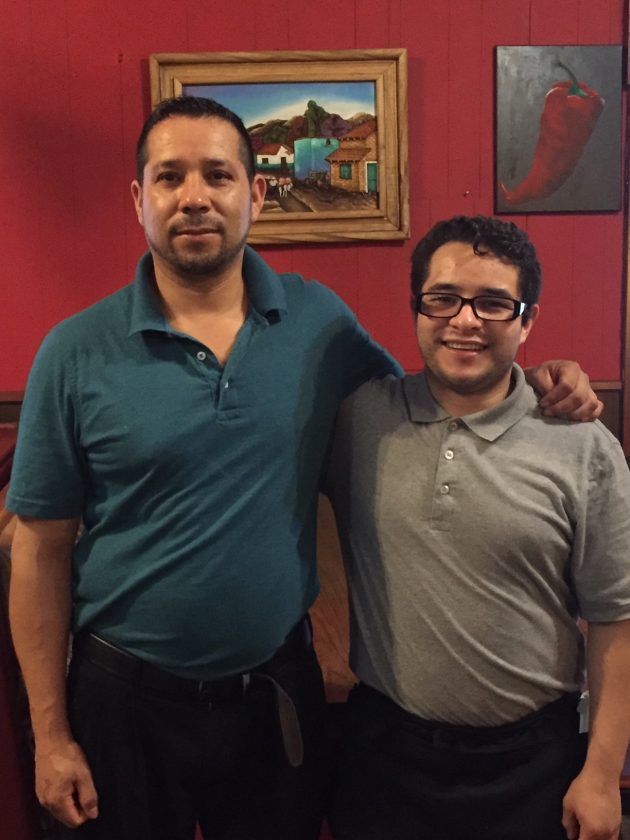 Father and son Jose and Luis Rodriguez team up with their wife and mother, Maria Cervantes at Azteca Mexican Diner located at 332 West Main Street in Falconer. Photo by Beverly Kehe-Rowland

After they left Mexico, the Rodriguez Family settled in Bristol, Tennessee where Jose found a job working as a sous chef, but soon worked his way up to head chef.

Eventually the family moved to Wooster, Ohio where Maria could be closer to her sister. Again, her husband secured a job working as a head chef. Rodriguez was given the opportunity for a partnership in a Mexican restaurant in Syracuse, New York, so the family moved once again. In this new partnership, he again, took the responsibility as head chef. He eventually sold his part of the business and moved to Oneida where he was again the partner in a restaurant venture.

The restaurateur had friends in Erie and Dunkirk and learned the Jamestown area was not saturated with Mexican restaurants, therefore he and a partner opened La Herradura on West Fairmount Avenue in Lakewood.

“We were the first authentic Mexican restaurant in the area,” says Luis Rodriguez, the chef’s son. 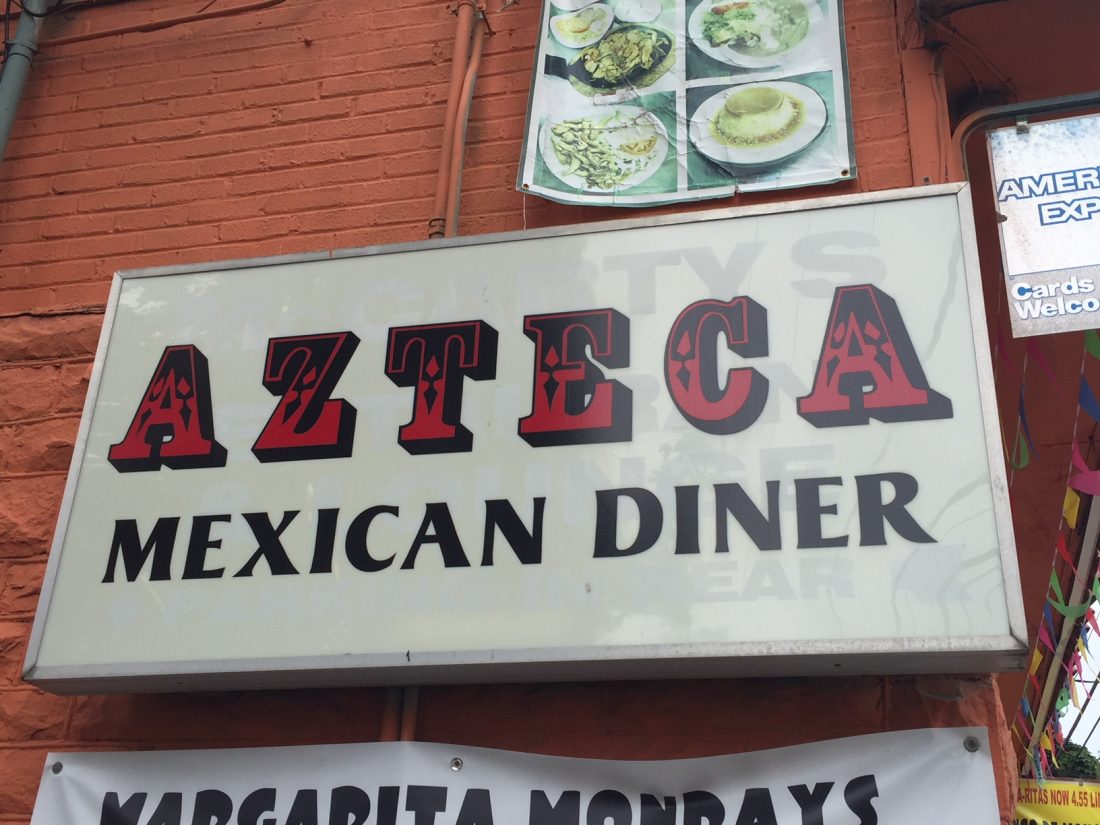 At 9 a.m on a late December day in 2014 smoke was seen coming from the building. The Lakewood Fire Department put out a fire that was inside the wall.

“The building was intact when the firemen left, basically water and roof damage. About two hours later, we were out to lunch and regrouping when we saw a whole bunch of fire trucks going toward Lakewood. Then we got the call,” says the 23-year old son. “The fire had rekindled. It was a total loss.”

It was deemed the cause of the fire was electrical. An attempt was made to run their business in Chautauqua Mall, but it was not successful. The older Rodriguez struck out on his own and opened Azteca Mexican Diner at 332 W. Main St. in Falconer in July 2016.

In order to open the new location, the family did a bit of work to the former McCarty’s Restaurant. The entrance to one of the restrooms was moved, the bar area and dining room were painted, as well as the exterior of the building and a new roof was installed. Some electrical work was also done and some of the lighting was modernized. A divider was added to the dining room.

Several pictures, that had been brought from Mexico, were hung on the walls throughout the family’s new business. A 3-D picture of the well-known Sleeping Woman hangs amidst Mexican banners and decor.

A woven wall hanging with an Azteca tribe member carrying his wife is draped over a low wall. There are several sombreros interspersed throughout. Two portraits by local artist Kasie Folk hang among the Mexican memorabilia. Flags of the family’s homeland hang above the bar.

“Most of the recipes my dad has he has taken piece by piece from places he has worked. He added some of his own,” says Luis. “He tries to keep the food traditional to the restaurants where he’s worked.”

Two signature dishes that are very popular are Tacos Verdes which are made of three flour tortillas, steak, cilantro, onion and green sauce. Rodriguez modified an older recipe for Burrito Enchilado. Steak, chicken or a mixture of the two, pico de gallo and rice and beans are folded inside a flour tortilla. Cheese is melted over the top. The choice of red or green sauce determines the amount of kick with red sauce being the spiciest.

“Lettuce and guacamole are served on the side to cool it down,” says the couple’s oldest son.

A Fajita Burrito special is available throughout the summer. It is made up of steak, chicken or a combination on a flour tortilla with bell pepper, onion and tomato. Cheese dip on the burrito is optional. Rice and beans are served on the side.

Lunch specials are available from until 3 p.m. and dinner is served all day. All mini tacos are 99 cents on Tuesday. Various drink specials are offered at the full-service bar.

Mrs. Rodriguez serves and is the manager. The couple’s son is assistant manager, server and handles their Facebook and Instagram accounts.

When the family has a day off, they enjoy relaxing at home, watching the boys play, taking care of house needs and going on road trips to Erie. They have family cook-outs, especially when Maria’s family comes from Mexico 3 or 4 times per year, with her father traveling from the state of Washington to join them.

Azteca Mexican Diner is open from 11 a.m. to 9 p.m. Monday through Saturday and is closed on Sunday. Reservations are not necessary but are possible by calling 488-7257.

Take-out orders are available by calling the same number. The business recently added Door Dash, a restaurant delivery service. It can be used by downloading the Door Dash app.

Luis says the recipes his family very kindly shares were passed down from his grandmother, whose tradition it was to serve each one for birthdays, Christmas, New Year’s Eve and special days.

“Tamales and Pozole are usually made to go with each other,” he says. “Pozole is the main course and tamales are for later at night.”

Cut pork into chunks. Boil meat with garlic, salt and onion in enough water to cover. Leave to cook until meat is tender. Saute the chilis and blend with salt and cumin. Once the meat is cooked, add hominy and chilis. Simmer 15 additional minutes.

Combine masa harina and salt with enough water (1 3/4 to 2 cups) to make a dough. Knead until the texture is soft. Make small balls, flatten slightly and fry in oil. Once they are fried, open and fill with cooked steak, salsa and beans.

Boil potatoes. Mash and then fry with eggs. Place potato mixture in tortillas and shape like a taco. Fry them in cooking oil. After frying, open and fill the tacos with lettuce, cheese, and salsa.

Cook and mash potatoes. Mix the potato with shredded cheese and shape them to round balls. Crack open the eggs and separate the yokes. Beat egg white until peaks form. Add yoke and mix well. Combine all and form into balls. Fry in cooking oil.

Steam beef in a pot. Saute chilis in oil. Blend chilis with salt and cumin. Add chilis to thoroughly-cooked beef. Boil for 10 minutes. Serve with rice and pico de gallo.