Christine Martin is surrounded by her eight children, who are positioned from oldest to youngest. Seated next to Christine is John, the oldest child. In the back left is Roy, Betty, David, Sharon, Chris, George and Irene. Submitted photo

Ready to slide down a snowy hill are Christine Martin (center) and sisters Irene and Catherine. Submitted photo 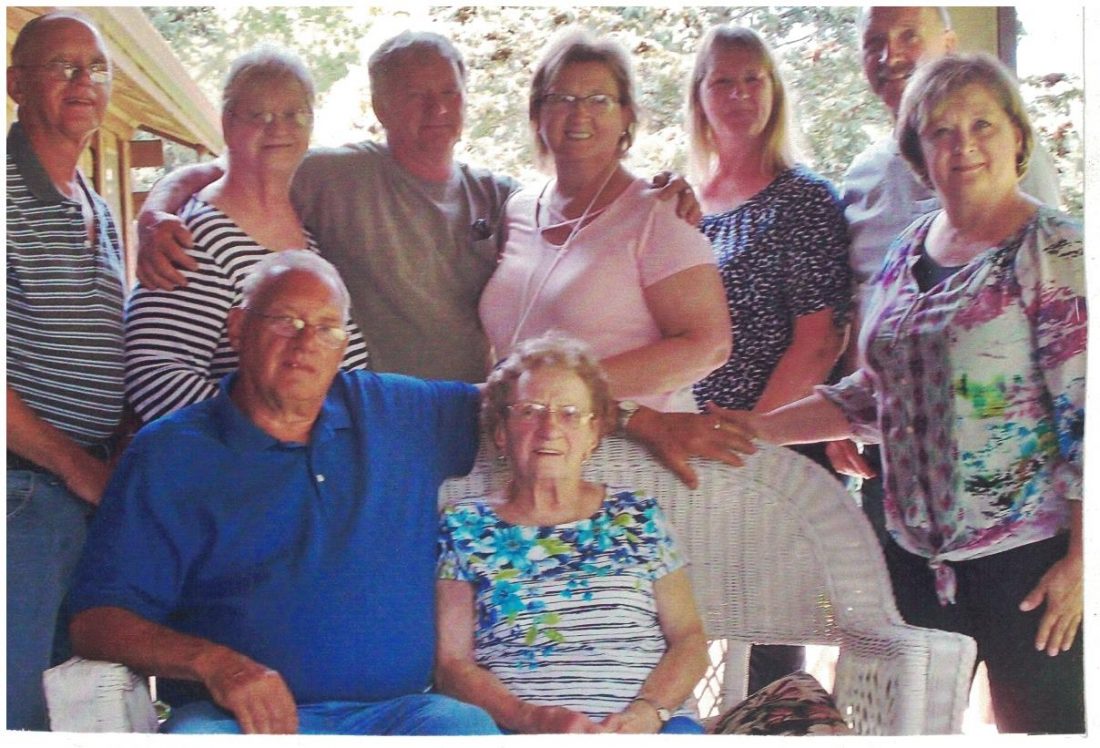 Christine Martin is surrounded by her eight children, who are positioned from oldest to youngest. Seated next to Christine is John, the oldest child. In the back left is Roy, Betty, David, Sharon, Chris, George and Irene. Submitted photo

Christine Martin was born on Nov. 28, 1922 at her parents’ home in Chesterfield, Pennsylvania. The first 20 years of her life were spent without the luxury of electricity. Her family of twelve knew no other way, therefore they didn’t see this as a hardship.

“There was no electricity in the whole town. We used kerosene lamps,” says the 96-year-old woman. “We all had to help with chores, in the house and outside, pulling weeds and keeping chickens out of the garden. We had to watch the cows and keep them out of neighbors’ property.”

She remembers playing marbles, hopscotch, tag and hide and seek. There was no kindergarten, so she jumped right into first grade. Not only did the one-room schoolhouse have no electricity, there was also no water, therefore the neighbors carried it in. The outhouse was divided into two rooms, one for the boys and one for the girls.

During recess the children played games, including Annie, Annie Over, where they threw a ball over the wood or coal sheds and ran to the other side, trying not to be tagged by the ball. Wood for starting the pot belly stove and coal for heating, were each stored in separate sheds. 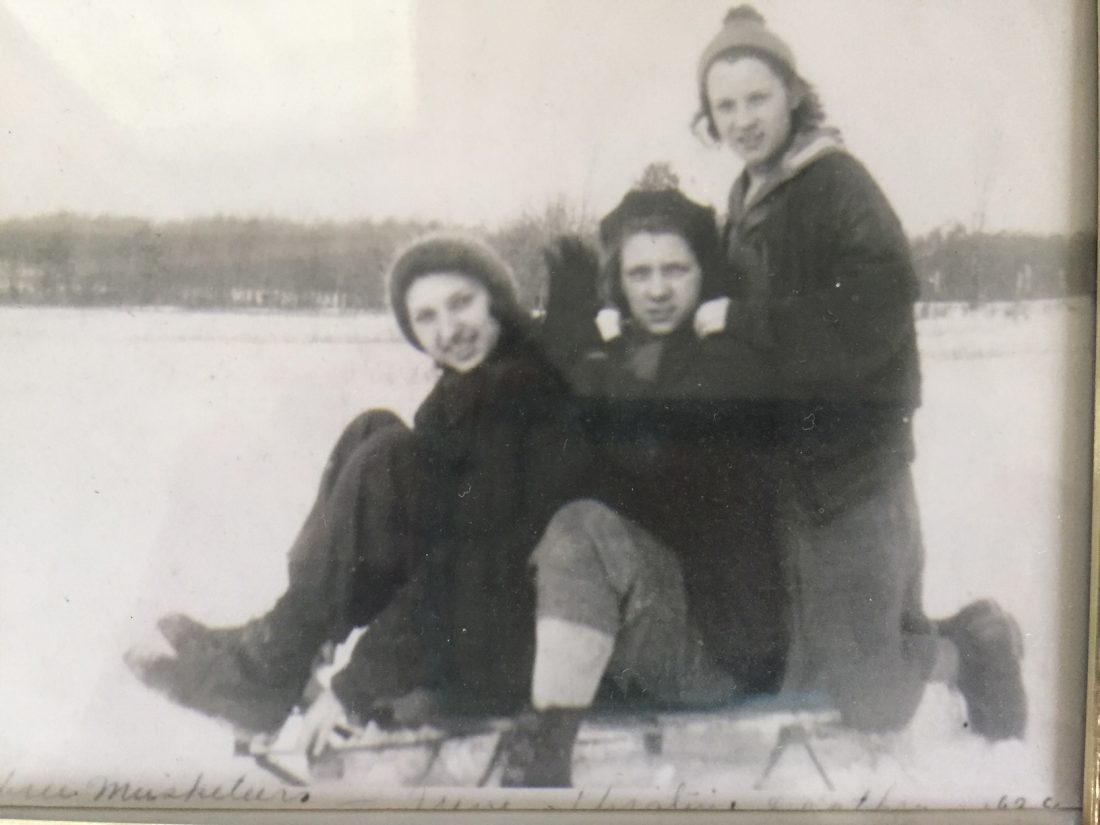 Ready to slide down a snowy hill are Christine Martin (center) and sisters Irene and Catherine. Submitted photo

Bigler Township School was a one-room school with eight grades and since there were no buses to take the children to another school seven miles away, eighth grade was the end of the line for Mrs. Martin’s schooling.

Her mother took ill when Christine was 14 and went to Ohio to stay with an older son for a while. She passed away after returning home, leaving her responsibilities to the young girl, including packing lunches and getting clothes ready for three brothers who walked through the woods to work in the coal mines.

“I just took over the housekeeping.”

She learned to milk the cows and attempted baking bread. All of her chores were done without the assistance of electricity.

“It (the bread) would rise okay, but then get real brown and fall. My oldest sister visited from Ohio and I watched her bake bread.” 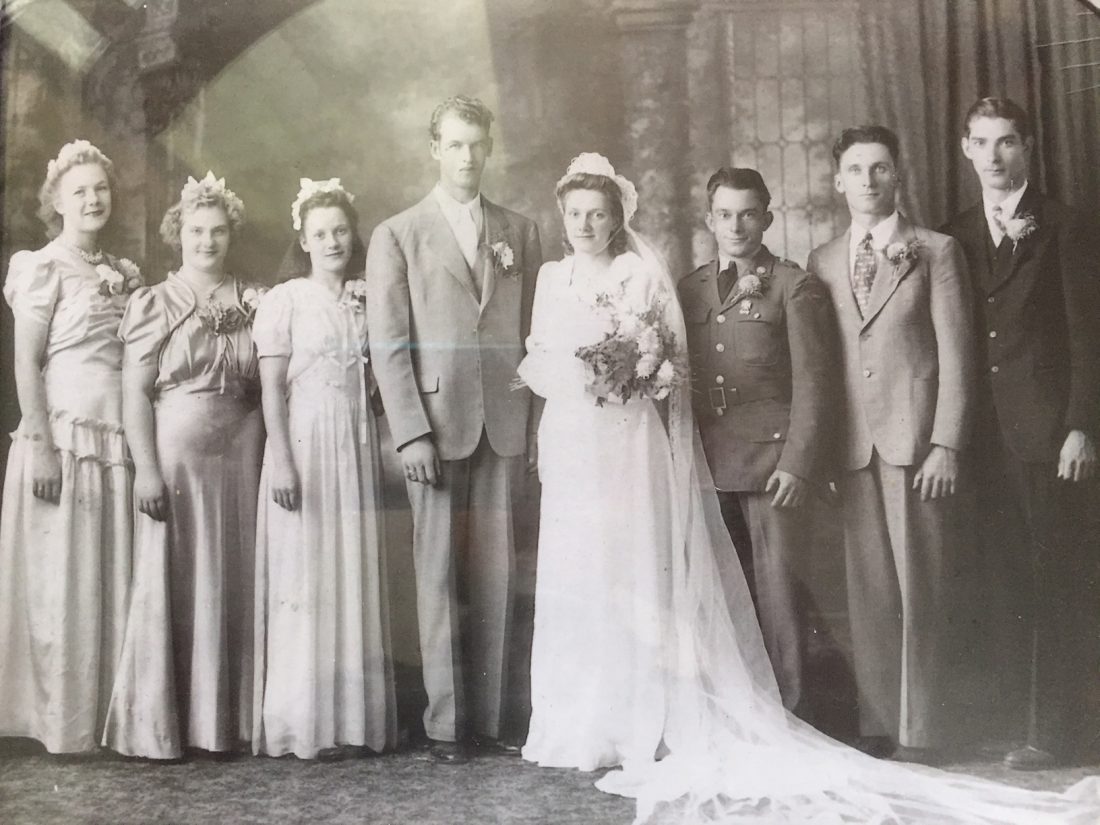 This is when she learned the bread didn’t require the full cup of salt she had been adding to the recipe.

She married David Martin on Sept. 26, 1942, when she was nearly 20 and moved “over the hill from Chesterfield” to Smoke Run where she first experienced the use of electricity.

David worked in the coal mines until he hurt his leg. It was at this time that the young wife went to work in a shirt factory. Many people from the area were relocating to Jamestown, to take jobs at Marlin-Rockwell Corp. and Martin followed in 1956. His brothers, brothers-in-law and nieces followed.

“Half of Clearfield County moved here,” says the nonagenarian.

The Martin’s chose to settle in Russell, just over the Pennsylvania line. This move brought another first-time convenience to the wife’s life, indoor plumbing.

During this time, Mrs. Martin was raising her family. In 1964 she took a job at Ethan Allen in Frewsburg and continued to work there until 1978 when she went to work at Blair Corporation in Warren, Pennsylvania. She retired in 1987 at the age of 65.

All through the years, she had grown a garden and canned its bounty, continuing this until a few years ago. For many years she used a gas stove in the basement of their barn for canning.

“We all got together to can,” says her daughter-in-law, Sherryn Martin. “Most of the sons still can.”

“The boys are all good cooks,” says her mother-in-law.

“I like to have a good time,” she admits.

“Her favorite song to dance to is ‘Rocky Top,'” says the daughter-in-law.

She watches the World Series and Super Bowl and is in football, baseball and Nascar pools.

“Why don’t they have Nascar in The Post-Journal,” she asks.

She enjoys cooking, baking, gardening, house plants, going out with friends and until a few years ago, she made rag rugs on a carpet machine. She likes to read lightweight magazines, such as Reminisce, Good Old Days, Guide Posts, Angels and Reader’s Digest. She once did word search puzzles, but now “it is impossible with arthritis.” She brags that she never smoked (cigarettes).

“You’ve got to be quiet when “The Price is Right,” “Jeopardy” or “Wheel of Fortune” are on and if you call, you have to call back later,” Sherryn tattles. “She likes to sit on her deck and watch the birds and she loves butterflies.”

The older woman chuckles when she tells how her ever-going scanner annoys her kids when they visit.

“But if they’re home and hear a fire whistle, they call to ask what it was about.”

Although she no longer goes to the farmers’ market in Warren, she helps her son, David, wash the produce that he takes every Saturday. She still does her laundry and cleans her house.

“She takes care of everything in her house,” says Sherryn.

“Except I don’t wash windows anymore.”

The older woman tells a story of how, when walking in her bathroom in stocking feet in 2015, she slipped and fell breaking her femur in three places. At that time the children pooled their money to install carpet in her bathroom.

“She’s one in a million. I just love her,” says her daughter-in-law of 42 years. “We’ve just bonded. She’s my Mama. She’s just a wonderful mother-in-law. Best mom in the world and that comes from all of her kids.”

She makes lunch for one of her sons who works nearby and stops in on weekdays.

“I used to make perogies and punena,” says the senior Mrs. Martin.

“She makes the best perogies you ever had in your life,” Sherryn says.