How It Once Was

Marion Wade’s watercolor and ink drawing is one of many she has gifted to friends and family. Photo by Beverly Kehe-Rowland

This very large clock is displayed in Marion Wade’s Swedish Room. It arrived one year after her Grandfather West sent for it. Photo by Beverly Kehe-Rowland

Marion Wade of Randolph is a very active nonagenarian. Photo by Beverly Kehe-Rowland

The Wades on their wedding day in 1950. Submitted photo 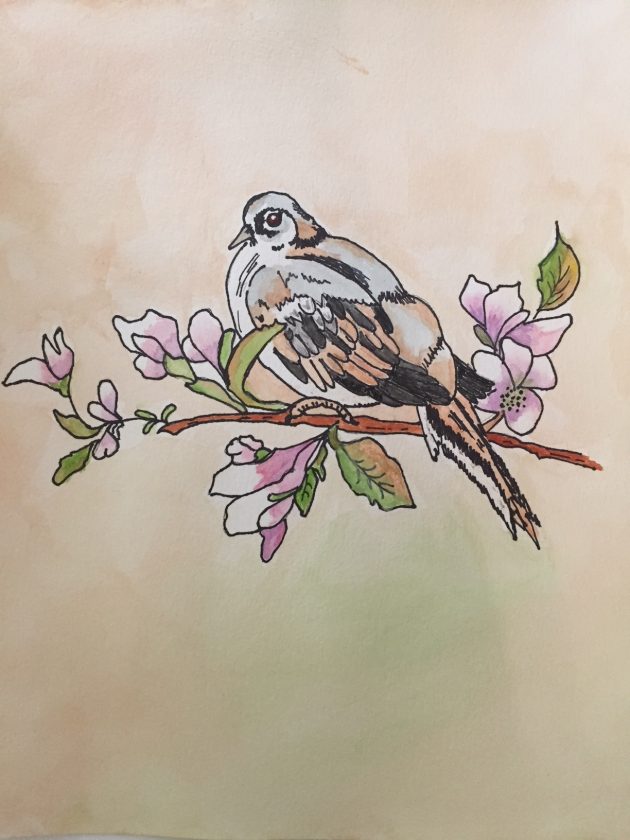 Marion Wade's watercolor and ink drawing is one of many she has gifted to friends and family. Photo by Beverly Kehe-Rowland

Not only was the world a much different place when Marion Wade grew up in East Randolph, but the little village was as well. When the 93-year-old woman was born in the former WCA Hospital, her family lived outside of East Randolph but eventually moved to Main Street and then to Church Street.

“We had a great time, my friends Shirley and Betsey and me. Our folks didn’t worry about us,” she says. “We went in the woods, went swimming in the pond and roller skated on sidewalks.”

She remembers the small hamlet of East Randolph quite different than it is today. For that matter, quite different than it has been for at least a half-century. She mentions numerous businesses that were in the “downtown” area, an area that is now mostly old store fronts converted into apartments with a few grassy, vacate lots where with buildings once stood.

She recalled a grocery store, two barber shops, a blacksmith’s shop, a small lunch room, a hardware store, a community building and a bank on one side of the street.

“The state police would shoot targets behind Johnson’s Hardware Store.” 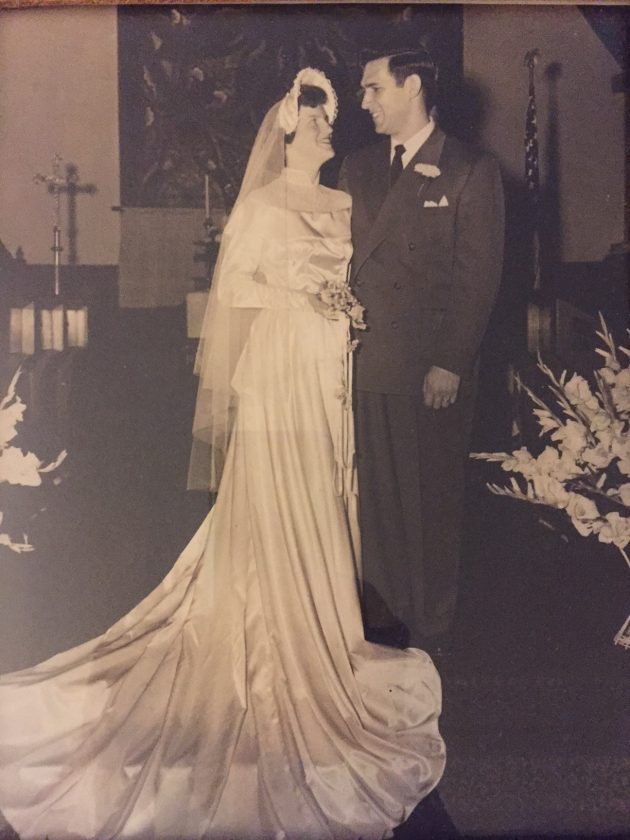 The Wades on their wedding day in 1950. Submitted photo

Her father played pool in the backroom of Beach’s Barber Shop. She attended Girl Scout meetings and Christmas and Halloween parties in the community building.

On the opposite side of the street was another grocery store. Champlin’s Restaurant was next to a bus garage near Huntington’s machine shop and Randolph Seed Company occupied a large building. Bissell’s Lumber Company was near the edge of the small village.

She goes on to tell about a store with a long porch in the Y between Hall Street and Williams Street. A fountain surrounded by a circular hedge stood in the point where the streets came together. The building is now occupied by a pizza shop. A dirt parking lot replaced the area where the fountain was located.

“In the wintertime Betsey Champlin’s brother had a bobsled. We’d ride on it from way at the top of Mill Street. Her brother steered and we often ended up in the road,” she recalls of the ride into Main Street. “There was very little traffic back then.” 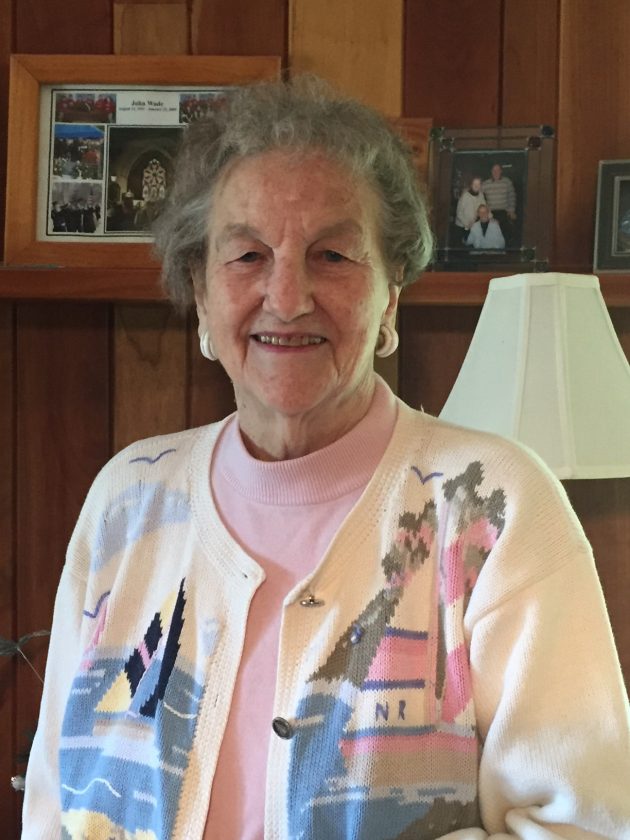 Marion Wade of Randolph is a very active nonagenarian. Photo by Beverly Kehe-Rowland

“You could take the bus from East Randolph to Jamestown. That was a huge trip, a big treat.”

She rarely went to Randolph when she was young, other than for school, something that is hard to imagine today when people freely pass back and forth from one village to the other several times a day.

She attended first and second grades in a school in East Randolph, which later became the Grange Hall and then the Moose Club. It was recently acquired by Randy Aldrich and will soon open as The Tool Shed, a restaurant and bar.

“When I was about four I saw my sister and others going to school, so I thought I had to go. I used to run away and sit on a bench at the back of the school,” she says. “My mother came to get me with a little switch that she used all the way home.”

“The teacher, Lorana Helms Rasey, said if I wanted to go to school that badly, I could come.” 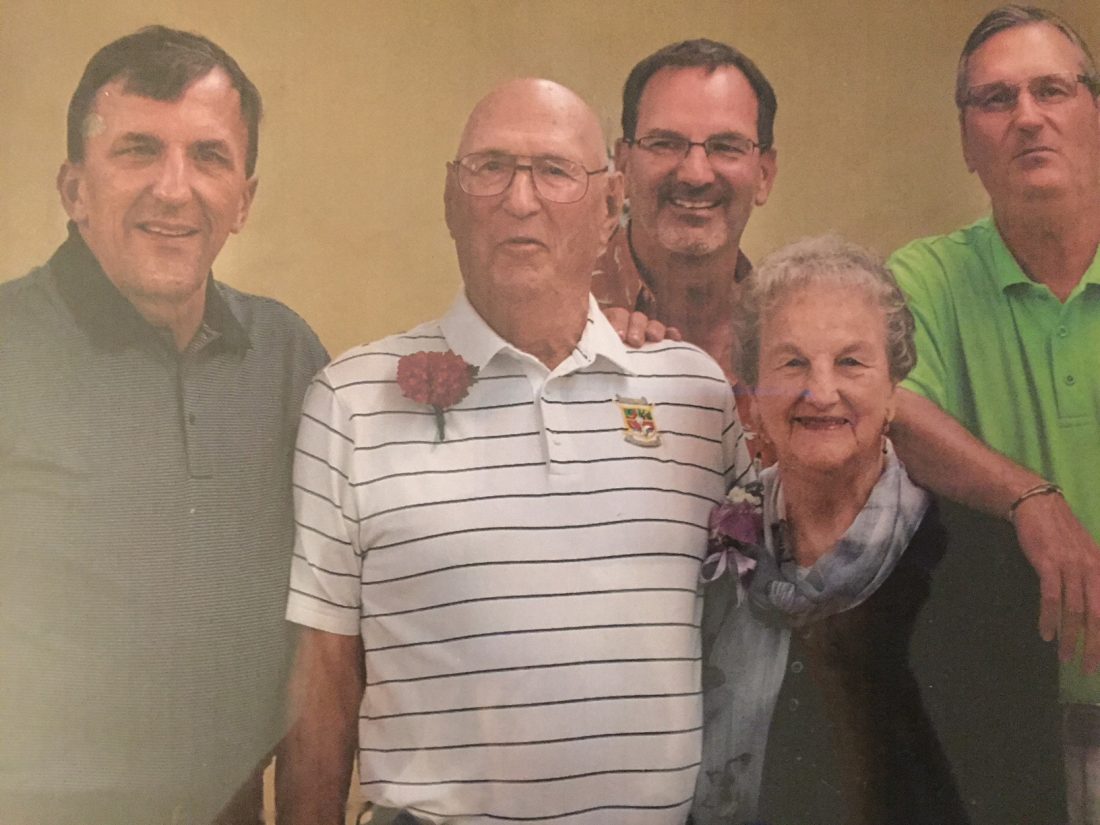 After completing two grades, the little girl moved to the new school built on the hill on Randolph’s Main Street. At that time all grades attended the school which is now the high school. Later, Gail N. Chapman Elementary School was built behind the high school.

She was very athletic and enjoyed several sports during her time at Randolph Central School.

“I loved sports. I played basketball but it was boring because we couldn’t bounce the ball like the boys could. We had different rules.”

She, also, played volleyball and was a cheerleader for boy’s basketball. Her mother made all of the cheerleader’s knee-length jumpers, which they wore over red shirts they had purchased.

After graduating from Randolph Central School in 1943, she attended Jamestown Community College’s practical nursing program. She worked as an LPN at the former Jamestown General Hospital until her marriage to Robert (Bob) Wade in 1950. She was married in a wedding gown her mother had made. The wedding took place in Grace Episcopal Church where Roberts family attended. Until they left Randolph, the couple sat in the same pew as Wade’s grandparents and parents had sat. They now sit in the row behind and other family members occupy the family pew. 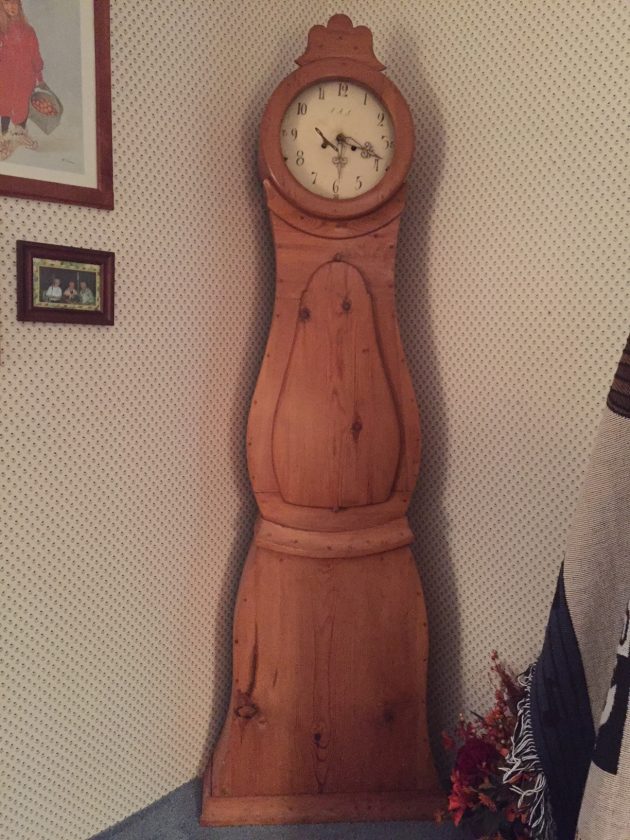 This very large clock is displayed in Marion Wade's Swedish Room. It arrived one year after her Grandfather West sent for it. Photo by Beverly Kehe-Rowland

Mrs. Wade worked a short time at Van Slyke Nursing Home in Randolph, before the birth of their children.

Bob Wade graduated from St. Bonaventure University in 1953. He was hired as a physical education teacher and basketball and track coach at Randolph, where he remained for two years before moving to Cassadaga where he did the same at Cassadaga Valley Central School.

“He still hears from “the boys” from both teams. They’re now in their 70s,” says his wife.

He was then hired at Port Jefferson, on Long Island, where he again taught physical education and coached track and basketball until he took the position of assistant principal and later became operational principal at River Head.

The family remained in the area for 20 years, where their youngest son was born and from where all three sons graduated.

The couple moved back to Western New York to live in Cherry Creek when Wade became superintendent of Pine Valley Central School. They eventually moved back to Randolph where they built their current home. The cherry moldings and cabinetry was made from cherry trees that grew on their Cherry Creek property. Later Wade’s uncle and niece each built a house near his home.

“We’re fortunate because they (the niece and husband) take care of us. Tom makes repairs and Jane sends food and flowers.”

Mrs. Wade, fondly referred to by family and friends as Petey or Aunt Petey, a nickname her brother gave her when they were kids, has attended weekly painting classes since 1974-75. Several of her framed pieces hang in the couple’s home. She enjoys giving her artwork to family and friends.

Their home is filled with several interesting items that were brought from Sweden by family members as well as a collection she has built on her own. Many pieces are interspersed throughout her home, but most are found in the “Swedish Room,” a room she has dedicated to her collection. Tomtagubens or Scandinavian gnomes, Dala horses, Swedish plates and chip carvings can be found in the room, along with a floor clock her Grandfather West had sent from Sweden and which was in transport for one year. Several Carl Larsson prints hang randomly in a long row, of which Mrs. Wade points out is typical of the way artwork is hung in Sweden.

She visited the country in 1991, from which her mother traveled when she was 14-years old, while assisting a mother with two children. Mrs. ?Wade’s paternal grandfather also came to the United States from the Scandinavian country.

Her parents had three other children besides Marion, a son and two daughters. Her brother, Burton (Buster) West, was a pilot who flew 60 missions over Japan in B-25 bombers.

“When he left for the Air Force, I cried all day.”

She tells about how her high school graduation ceremony took place on an afternoon and that It was the only celebration she had due to tight money and rationed products.

She remembers the holiday meals her mother prepared of traditional Swedish food, such as pickled herring, lutfisk, korv, potatoes, rice pudding, cardamom bread and pepparkakor cookies. She also remembers having spaghetti for the first time when she was 17-years old.

She is a member of her church and Episcopal Church Women. She attends Scandinavian Studies held monthly at Jamestown Community College.

The Randolph woman is a member of Randolph Historical Society where she serves as a trustee and is currently working on getting information about and trying to find pictures to frame of Billy and Ralph Ingerson who died in World War II. Billy died in 1942 while serving in the Army and Ralph in 1944 while serving with the Marines.

Another of her projects is gathering information on the latest honor given to Retired Army General Ann Dunwoody, the first woman to become a four-star general in military service.

She is working with Tom Congdon on information about the mammoth, whose 12,000-year old remains, one of the most complete specimens to be found in New York State, were found at the Randolph Fish Hatchery in 1934 and of which a replica will soon be housed at Randolph Free Library.

The Wades have three sons. William lives in Durham, North Carolina, Rodney in Melville, Kansas and Kevin in East Chatham, New York. Four grandsons and one granddaughter complete their family.