Mason Is A Warren Man Of Many Talents, Interests 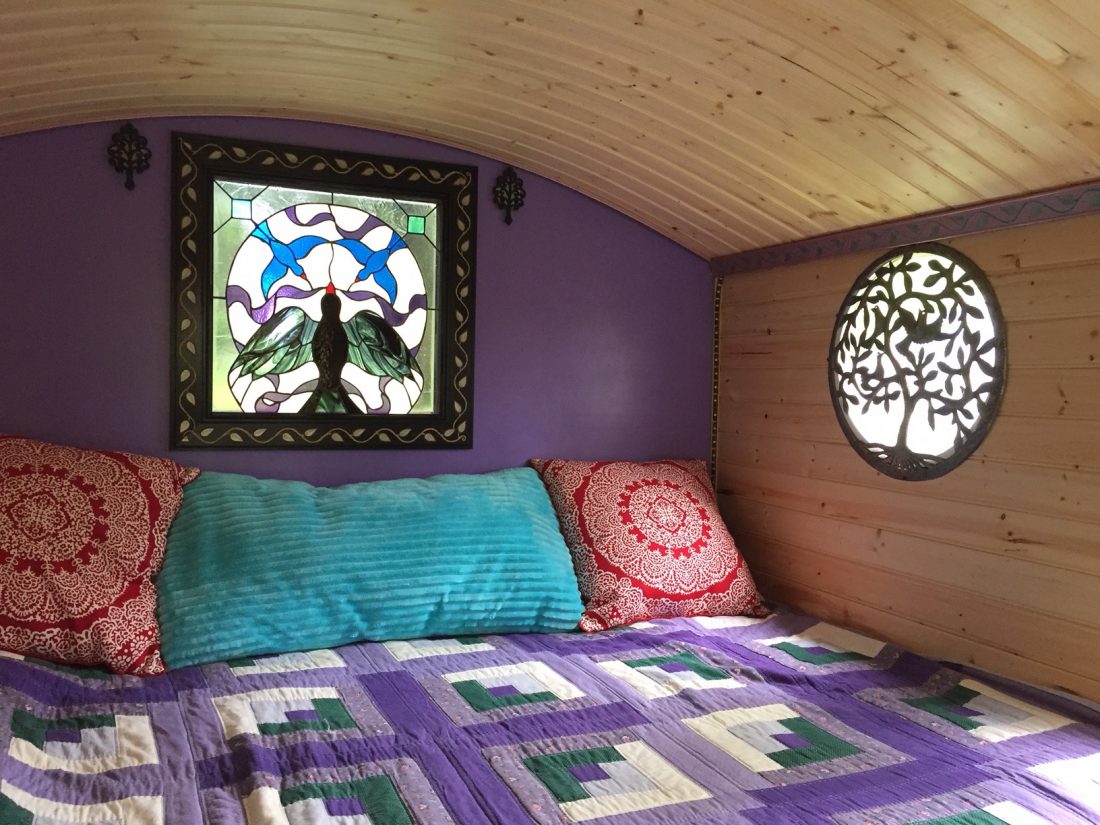 The stained glass window was designed and made by Linda Mason. Photo by Beverly Kehe-Rowland

Kim Mason has many interests and many talents. Since his retirement from Blair Corporation after 34 years, where he worked as a master technician, he has been doing a little of everything.

The Jack of all trades knows his way around the kitchen, as well as the tool box. At one time, he planned to go to culinary school. His food service interest began when he was a dishwasher and bus boy at The Savoy Restaurant when he was 14.

He took a break from the Pennsylvania winters when he was 18- and 19-years-old by hitchhiking to California. After establishing an address, he applied for work. When he didn’t find a job, he set out for adventures. He traveled up and down the coast by using his thumb to summon transportation. His adventures found him sleeping under bridges and venturing into Mexico.

Some adventures did not end well, as was the case when he was traveling from Los Angeles to San Francisco. Mason, a few guys and a girl were picked up by a man in a truck. When the truck overheated, the driver asked the men to exit into the night.

“It was pitch black,” says the adventurer. “We burned brush which ended up being poison ivy or poison oak.”

Over the next few days he came to realize something was wrong, very wrong.

After making his way to a medical facility, he was given a huge tube of hydrocortisone.

He continued the lifestyle for one more winter, before meeting his wife in an employment office in Pennsylvania. They eventually married and had their daughter, Morya.

He worked at the Allegheny Hotel where he started as a short order cook.

“Frank taught me to cook at the Allegheny Hotel when I was in my early twenties,” he says.

He then managed the Twin Drive-In until it burned down. He was hired at New Process, which eventually became Blair Corp. and where he worked until he retired. Since retirement he does handyman work and has installed a roof.

About two years ago, his wife gave him a request for a special project. Her business, Linda Mason Designs, takes her to craft shows with most being far enough away that she needs to spend a few nights away from home. In the past her husband had built a tiny trailer which the couple slept in, but Mrs. Mason was ready for something a little bigger, a little more comfortable and unique. Being an artist with a creative mind, she decided on a gypsy-style wagon. Mason enjoyed building the first trailer and took on the challenge of the second, with an added challenge of making it light-weight.

“I told him the next one had to be bigger and pretty with a rounded roof, like a gypsy wagon,” she said. “We collaborated on the design and where the bed would be.”

It took her husband three weeks to build the 5-feet by 8-feet trailer working ten hours per day. He did all of the woodworking and designed the door. She painted the detailed trim inside and out.

The interior is decorated with layers of multiple vivid colors. The main walls are made of wainscoting in a natural finish. A lavender accent wall surrounds the stained-glass window that Mrs. Mason designed and made. Lavender molding with a teal vine trims the windows, door and ceiling. A small copper basin with a copper backsplash is located near the door. The bed linens, pillows and curtains are made of bright multi-colored fabric, of various prints.

The exterior is painted a periwinkle color with red, black and white trim. Long, black wrought iron hinges and handles trim the slightly arched door with a triangular window that has a Celtic knot design. A thick wooden shutter, trimmed in black wrought iron frames the rear stained-glass window and can be closed for privacy.

“It has become an exhibit at the Kinzua Heritage Festival and Harmony Historical Society shows,” says Mrs. Mason.

Her husband not only builds trailers, he built the home the couple shares from the foundation up, including the wiring and finish work. The walls are 12-inches thick. The kitchen, bathroom and Linda’s workshop are in the basement. An entryway, living room and den/library are on the main level with two large bedrooms on the upper floor.

“I’ve learned a lot since then,” says the Warren man.

He lists fishing as his main hobby and enjoys ice fishing on Findley Lake. He has made approximately 100 long bows from Osage orange or hedge apple, ironwood, black walnut, hickory, bamboo and black locust woods.

He was asked to do a demonstration for Cub Scouts when he served as president of Pennsylvania Association of Traditional Hunter Archers or PATHA, a group that is no longer in existence. He was then asked to help the entire pack of 8 to 15-year olds make bows. Five men from PATHA spent a weekend, from Friday night to Sunday helping the group of boys make nearly 50 bows.

“Every now and then a guy with two kids will come up to me and say ‘you’re Mr. Mason, aren’t you?'”

He hunts white-tail deer and has hunted caribou for meat, not for sport.

He offers six recipes that he has either developed or tweaked to suit his own taste and admits he doesn’t make his dishes the same each time.

“I had to have something for a party, found the Spicy Black Olives recipe and added my own twist.”

Beef can be substituted in the Crock Pot Venison Rump Roast recipe.

“The recipes are really flexible. You can go up or down on the spices to adjust for taste, he says.”

Linda Mason Designs Glass Beads and Wearable Art will have the Gypsy trailer at Kinzua Heritage Arts and Music Festival on Fox Hill Road in Russell, Pa., from Aug. 23-25. It will, also, be displayed at Harmony Historical Society Fall Harvest Festival at 1943 Open Meadows Road in Ashville on Sept. 21 and 22.

Mix oil, salt, ginger, red pepper and garlic. Quickly blanch olives in boiling water. (You can skip this if you like, but blanching will let the olives absorb the spices better.) Gently mix warm olives with oil and spice mixture in a covered bowl or jar. Place in refrigerator for at least 2 hours. Overnight is better. Serve chilled. Note: add more or less red pepper to taste, but use caution as the red pepper gets hot quickly.

Trim meat making sure to get the silver skin off. Mix the dry seasons, except sugar. Preheat oven to 350 degrees. Press spices into the meat. Cover and set aside. Heat oil in a relatively deep cast iron pan. (This helps keep the splattering down.) to just starting to smoke. (Very hot. Be careful to not let it flame on you. Keep a lid for the pan close by.) Just before the oil smokes sprinkle sugar on the meat and lightly press, you still want to see the sugar sparkling (The sugar is to caramelize the surface of the meat.) Place meat in pan with tongs, very carefully. Turn meat to sear all sides until it is browned 1/4 to 1/2-inch up. Remove meat and place meat in a deep-sided baking dish. Put in heated oven. Turn off oven. This is to keep meat warm.

Now you should be looking at the pan wondering how the heck am I going to get this thing clean. This is where the wine (that you haven’t drank) comes in. Pour off the oil and leave the food particles in the pan. Heat pan and add wine. As the wine starts to boil, scrape the pan and clean the hardened particles off the bottom. Reduce heat as low as you can. Remove meat from oven and set out to rest approximately 10 minutes. Slice meat and pour the wine from the pan over. (I know this seems let a lot of work, but it is not that bad, and it is well worth the trouble.) It goes well with the next simple dish. Serves 2-3.

Scrub potatoes with vegetable brush and pat dry. Roll potatoes in oil. Place on a cookie sheet, taking care they do not touch. If using spray, spray the cookie sheet. Place potatoes on sheet and then spray potatoes. Lightly sprinkle potatoes with salt. Bake at 350 degrees until fork tender. The reason we make more than the actual serving amount per person is so there will be leftovers for home fries for breakfast the following morning. Serves 2-3.

Trim meat making sure to get the silver skin off. Mix dry seasoning, except sugar. Rub into meat. Heat oil in deep pan. Just before the oil smokes, sprinkle sugar on the meat and sear in oil. When meat is seared about ™ inch up all sides, transfer to crock pot. Place vegetables in pan and brown slightly. Transfer vegetables onto meat in crock pot. Add a little water or maybe wine to clean residue in pan and transfer to crock pot. Cook in covered crock pot on medium for about 4 hours, watching to make sure the juice does not overflow. When you see the juice covering or almost covering the meat and vegetables, turn to high and continue cooking for 1 to 2 hours. Again, watching it does not overflow. Turn heat to warm until ready to eat. When ready remove the meat carefully and rest for approximately 10 minutes. Slice against the grain and serve with juice and vegetables. Also good with dry red wine. Serves 4-5.

Cook bacon in large pot until very crisp. Remove and set aside. Add onion and saute until clear. Add broth, potatoes, corn, Old Bay, salt and pepper and bring to a boil until potatoes are fork tender. Add Northern Pike, simmering until fish is cooked but not falling apart. Slowly and carefully stir in heavy cream. Simmer until warmed. Serve in large bowl and add bacon as garnish. Serves 6-7.