This picture of Alice and Harold Lindquist Jr. was taken shortly after they were married in 1943. Submitted photo

Wilda poses on one of the beautiful braided rugs Mrs. Lindquist made from wool clothing and blankets. Photo by Beverly Kehe-Rowland

Seated is Alice Lindquist, 94, with three of her four daughters. Left to right-Ginny Hubbard, Bev Sample and Carolyn Lindquist. Photo by Beverly Kehe-Rowland

The Lindquists celebrate their 25th anniversary with their children in 1968. Submitted photo 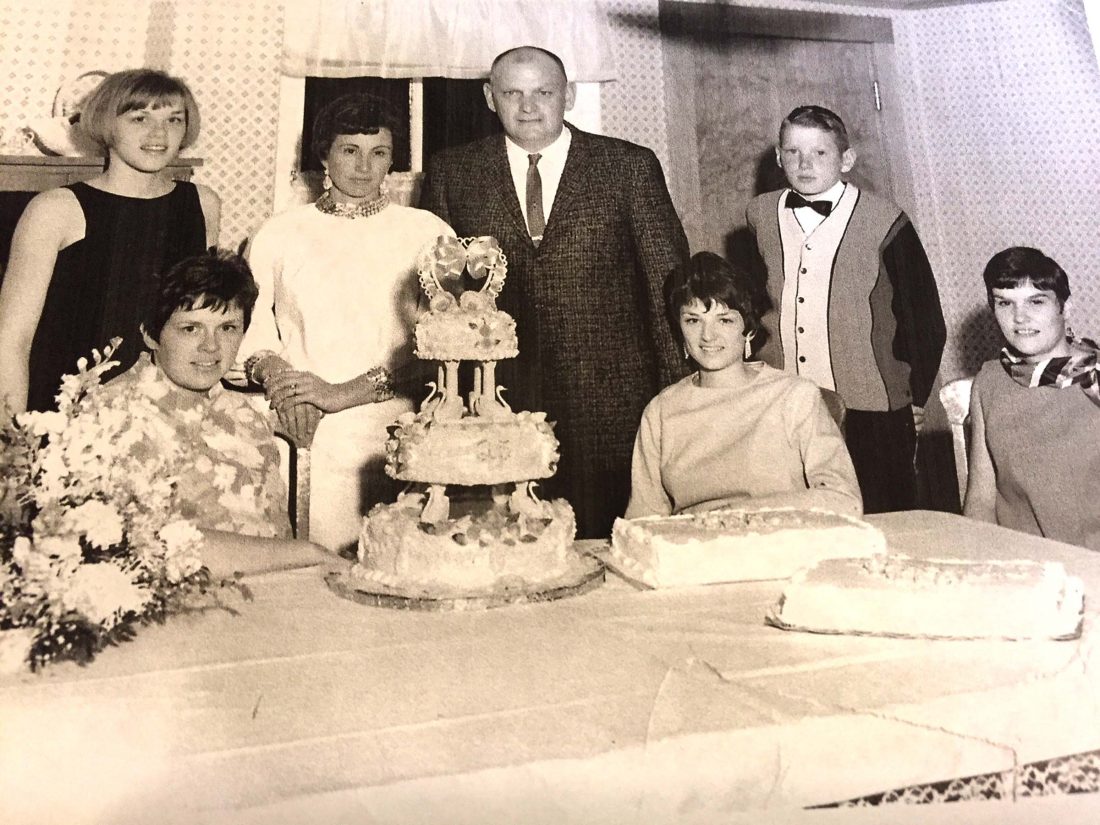 The Lindquists celebrate their 25th anniversary with their children in 1968. Submitted photo

“My life is very ordinary,” says 94-year old Alice Lindquist. “I was just a farmer’s wife who has done nothing of note.”

Her birth took place on Jan. 22, 1925 on Conewango’s Seager Hill Road. Albert and Beatrice Barton, raised four sons and two daughters on the family farm. As was the case with most houses of the time, the old farmhouse was very cold in the wintertime, due to lack of insulation.

Although there was no indoor plumbing, the three-seater outhouse was attached to the house. A metal tub, filled with hot water from the woodstove’s reservoir, was placed in the kitchen for bathing.

The nonagenarian remembers being raised in a home with Christian values and a childhood of hard work and fun. With her siblings, she played Old Maid, checkers, Uncle Wiggly, tag and pom-pom pull away. In winter months, the siblings went sledding on the country roads and in the drier months they rode a bicycle. Ample time was spent roughhousing throughout the year.

The one-room schoolhouse where the children attended and where their mother had taught, was one mile away and unless it was inclement weather, when her father would hitch up the horse to the buggy, Alice and her siblings would walk both ways to school. When she reached ninth grade, her route to school changed. She still had to walk one mile, but in the other direction, to reach the bus that delivered her to Randolph Central School. 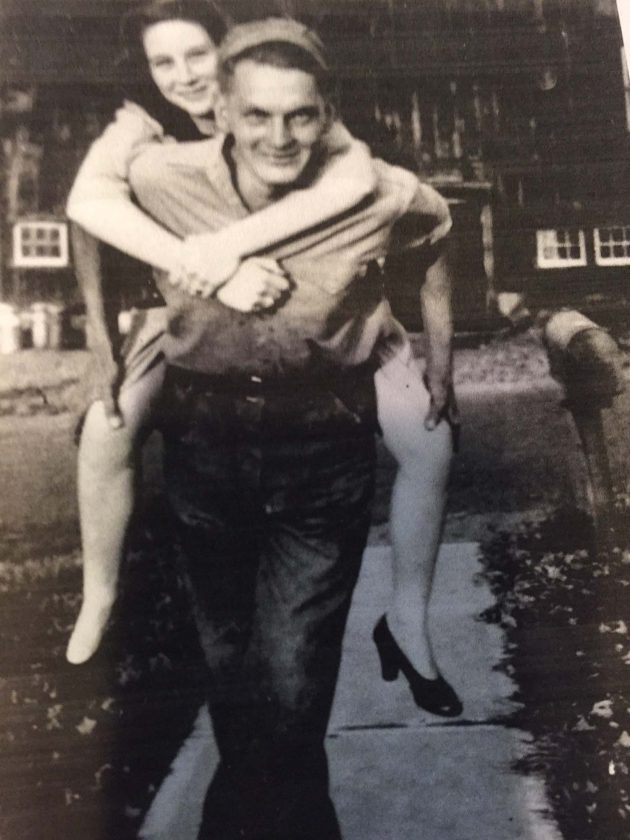 This picture of Alice and Harold Lindquist Jr. was taken shortly after they were married in 1943. Submitted photo

Sadly, her father died in the hay field two days after her high school graduation, leaving her mother with a disabled child and no one to run the farm. Having been a teacher earlier in her life, she sold the farm, moved down the road and went back to teaching school. Three of her four sons left to fight in WWII. Bert joined the Marines, Clarence the Air Force Army Corps, Harold the Air Force and Roderick was in the Navy. Harold reached the rank of first lieutenant when he was 21 years old, was commander of ten men on a B-24 and piloted 35 bombing missions over France and Germany. Years later, with his brother Clarence, he founded Barton Tool, Inc. in Falconer.

Alice married Harold Lindquist Jr. in 1943. The couple bought a dairy farm on Waterboro Hill Road in Kennedy where they raised four daughters and a son. Their first baby was born at home to save money because “we were poor, struggling farmers.”

The busy mother worked in the barn and fields, mowed the lawn, and helped paint the buildings. She kept an immaculate house, cooked three hearty meals, kept the books and was involved in nearly every aspect of what it took to co-manage the farm.

“She never asked much of her girls because she thought we had enough farm chores,” says Bev Sample, her oldest daughter. “She entertained friends and family, never losing her sunny disposition or optimistic outlook on life. Her kitchen was the favorite gathering place. (She served) delicious food, nothing fancy, just good old-fashioned meat, potatoes, gravy and garden vegetables with pie for dessert. She filled your tummy and lifted your spirits with her cheery nature and gift of gab.”

“She did the laundry with a wringer washer in an awful cellar with dirt floors and stoked the wood/coal furnace down there,” she adds. 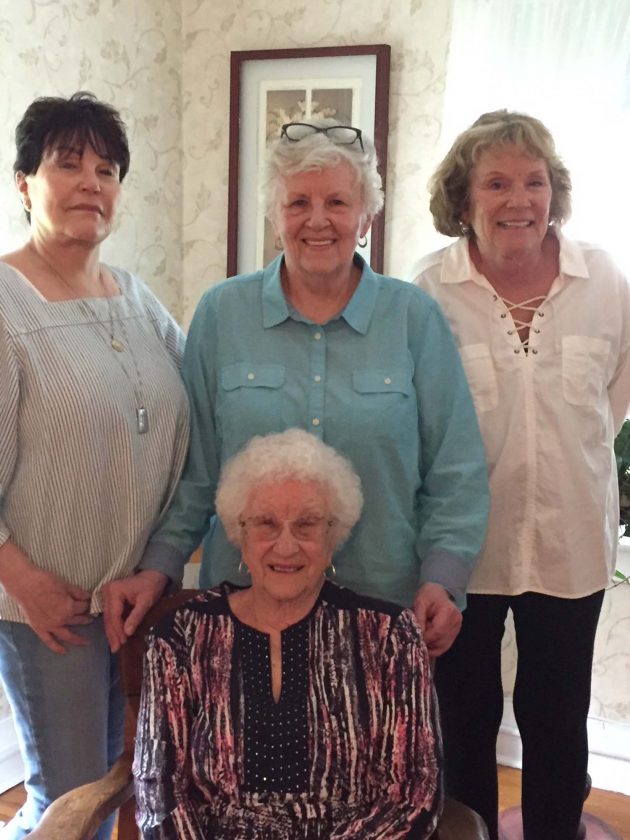 Seated is Alice Lindquist, 94, with three of her four daughters. Left to right-Ginny Hubbard, Bev Sample and Carolyn Lindquist. Photo by Beverly Kehe-Rowland

Her daughter also tells how her mother “kept a virtual archive by organizing dozens of albums and scrapbooks with photos and newspaper clippings.” She took in an exchange student and coordinated her children’s weddings.

“I remember her up and ironing those cotton dresses at all hours of the night for four little girls.”

As with most women of that era, Mrs. Lindquist kept a garden and canned the bounty.

She spruced up the wood floors of her home by spreading a fresh coat of polyurethane on them. When the barn roof needed to be sealed, Alice or one of her children would crawl up the roof, straddle the peak and hold onto a rope that was tied around Mr. Lindquist as he brushed the tar onto the steep roof.

On occasion, the hearty farmwoman could be found lying under the tractor, as her husband wasn’t mechanically inclined. 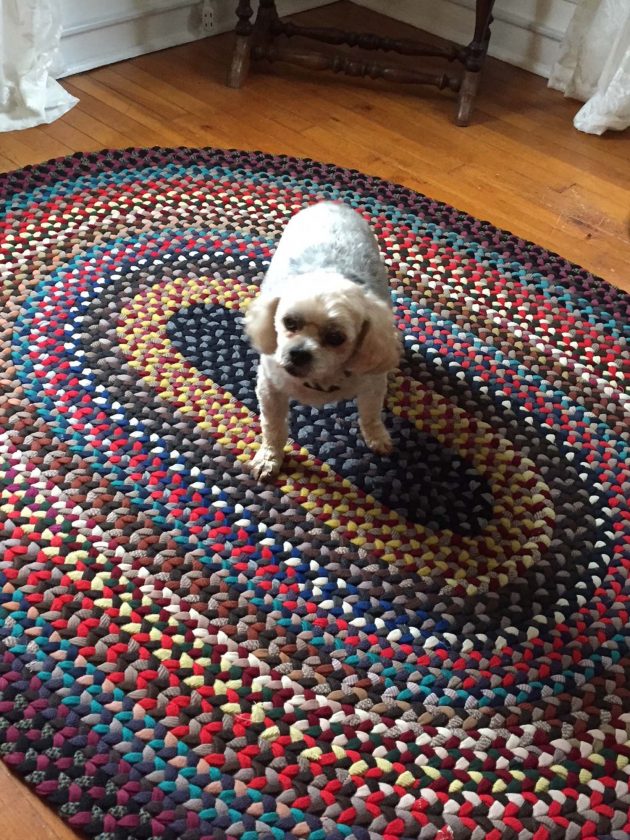 Wilda poses on one of the beautiful braided rugs Mrs. Lindquist made from wool clothing and blankets. Photo by Beverly Kehe-Rowland

The hunters always came to her house for lunch on opening day and sometimes after the meal, she would join them on the hunt. She would use her kitchen table to butcher the deer for canning and making into mincemeat.

Chicken dinners were made from the chickens raised on the farm. Maple trees were tapped, and in the early years the sap was boiled in the sugar shack, but later five old kitchen stoves were set up in a small shed to handle the job.

Harold Jr’s sister, Bessie, always helped with the hours-long boiling job. One year when the Lindquist’s third daughter, Kathy West, was videotaping the process while conducting an interview with her aunt, she got too close to the stove and her coat caught on fire. No one was injured, but her husband’s favorite coat was destroyed.

Another example of an unfortunate incident happened one very cold day when the Lindquist’s set out to go fishing, one of Harold’s favorite activities. Alice, dressed in a snowmobile suit, had been perched in an unanchored chair that Harold had rigged on top of a boat seat, when she fell overboard.

As she popped up out of the icy cold, deep water, Harold told her to hold onto the boat until he got the cramp out of his leg.

Not all incidents were accidental, as was the case when the couple was working in the milk house. Her husband said something Alice didn’t like while she was using a water hose. She reacted by putting the hose in his boot, which stunned the big, imposing, no-nonsense man, causing both to laugh.

The couple sold their farm in 1975 and retired to a small farm that had belonged to Mr. Lindquist’s father. Even though Harold had disabling arthritis, the couple felled trees and used them, as well as trees that came down on their own, to cut into firewood. Alice often loaded the truck and delivered the wood to their customers. On one occasion, she cut her finger, taped it back together and continued her work. At this time in their lives, she not only cared for her husband, but for his father, her mother, who lived to be 92, and a neighbor’s toddler.

Even though it sounds like her life was all work, she found pleasure in making beautiful braided rugs, some room-size, from wool clothing and blankets which she and her children use on their floors to this day.

She also made quilts, which won a few ribbons at the county fair. She enjoyed playing poker, euchre and pinochle as well as league bowling and square dancing. Amazingly, when she was nearly 70-years old, she had a successful first attempt at water skiing.

Alice lost her son, Bart Lindquist, in 1986 and her husband in 2002. She still makes her home at the small farm after 43 years.

“Macular degeneration and hearing loss have slowed her down a little, but they are merely obstacles to work around,” says the eldest daughter. “Dr. Krahn calls her his inspiration.”

She depends on Carolyn Lindquist, her youngest daughter who lives nearby, to tend to many tasks she can no longer do.

“With her daughters, 13 grandchildren and 28 great-grandchildren, jobs are assigned with skills and proximity in mind. It’s not always easy to live up to her standards,” adds Mrs. Sample.

The family matriarch still cares for the grounds, mowing 3 acres of lawn and is quite particular about the flowers. Due to her failing eyesight, her family teases her about the added amount of fuel it takes to mow her lawn as she may pass over grass that has already been cut. With strong determination, she sees the job through.

Her story made it into the Randolph Register, when she was nearly 90 years of age, after she used her larger tractor during a snowstorm to rescue some snowmobilers from Ohio who became stuck in the swamp behind her property.

The avid reader now listens to talking books and cares for her beloved dog, Wilda. She enjoys the Post-Journal by way of visitors reading the obituaries and the articles that catch her interest.

“I have a very good relationship now with my recliners,” says the 84-year old. “I have the most fabulous friend and neighbors. If I hadn’t had the help of everybody, I couldn’t do it.”

She sings praises to Pam Lucas who cleans her house and cuts her hair and gives her perms and Ed and Mary Lou Holmes, former neighbors, who take her out to eat and “look out” for her. She is thankful for the assistant of the Blind Association and meals brought three days per week by Meals on Wheels.

The farm wife never had the opportunity to travel or work away from home and rarely had a day off.

“I felt Mom’s story needed to be told. She’s a wonderful person and she’s had a wonderful life,” says her adoring oldest daughter. “Her story is so interesting and should be told to honor her.”

The Lindquist’s second daughter, Ginny Hubbard, who lives in California, comes every year to spend time with her mother.