A honeymoon picture of Betty and John Alexander. Submitted photo

Ninety-six year old Bettie Alexander is happy to have been blessed by a community full of family members. Submitted photo

One of the collages of family members hanging in the Alexander home. Submitted photo

A few of the golf trophies won by Bettie Alexander. Photo by Beverly Kehe-Rowland 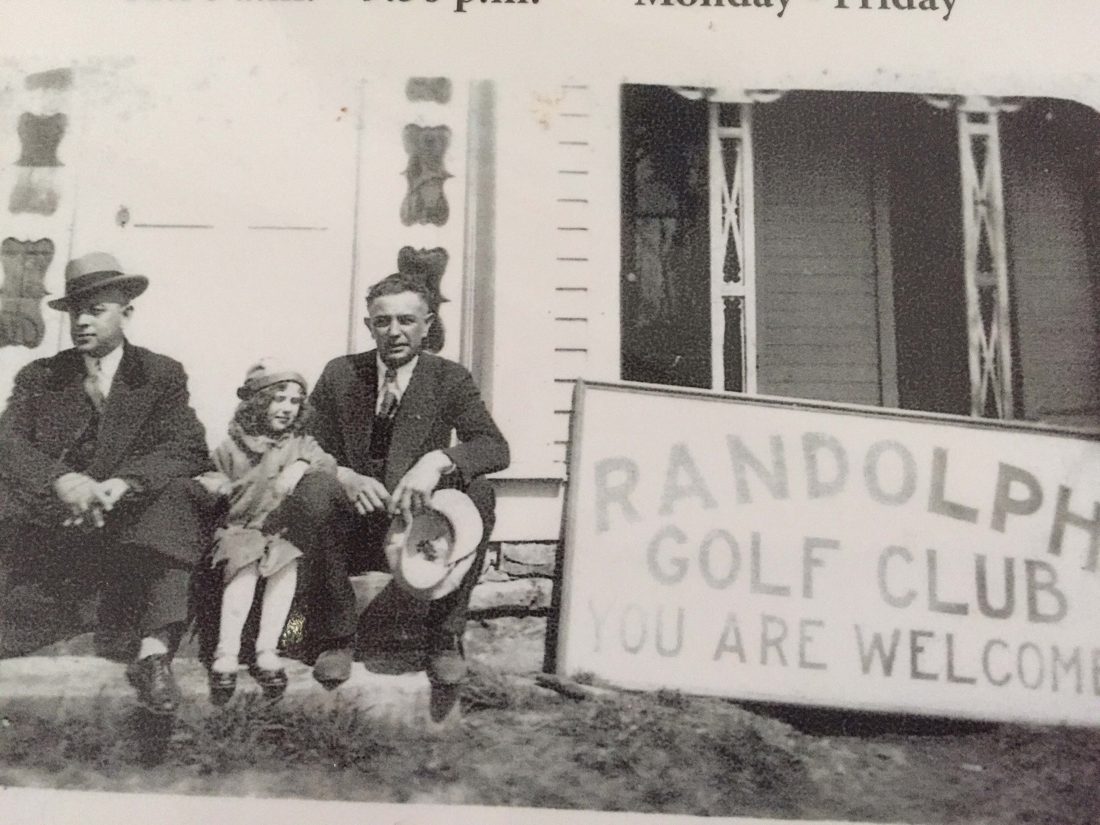 Randolph’s 96-year-old Bettie Alexander and her family have had a big presence in the town for nearly a century. She was born in Jamestown and moved to the small village when she was 4. Her father, Edwin “Bert” Keith, a plumbing and heating contractor, built Randolph Golf Club in 1929. The idea to build the golf course came to him when a doctor advised his ill sister, who enjoyed golfing, to walk at a golf course to speed up her healing.

Keith, who grew up in Quaker Bridge, which is now part of Allegany State Park, served several terms as mayor, was the town supervisor and built the movie theater in Randolph.

“He liked to get things started but liked to go on to something else,” says his daughter. “My mother was known as the ‘flashlight lady’ because she would shine the flashlight in the corners (of the theater) where couples liked to snuggle.’

While talking about her mother, Catherine Keith, the daughter tells about how she had lived on the grounds at Chautauqua Institution before moving to Randolph, where she was a switchboard operator when the armistice was signed in 1918 at the end of World War I.

“She had to turn off the switchboard because it kept ringing.” 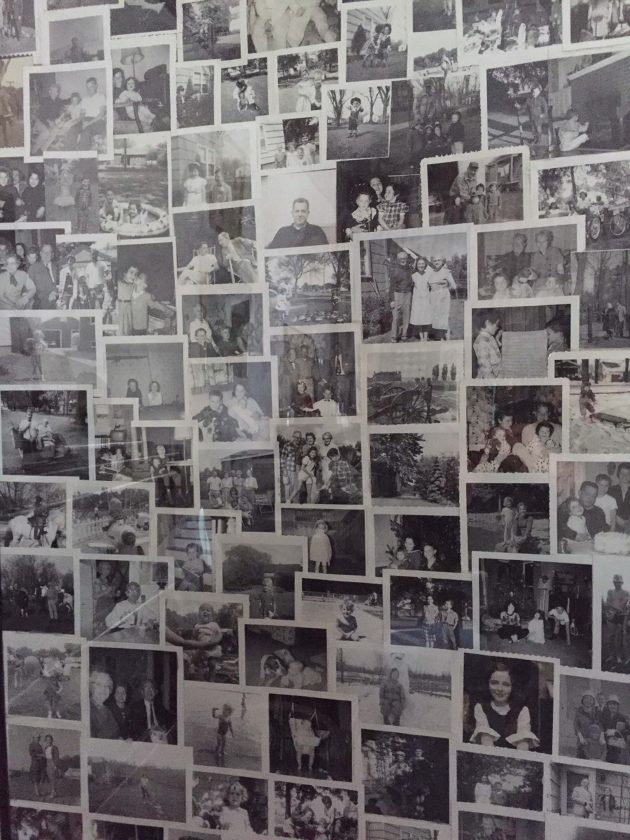 One of the collages of family members hanging in the Alexander home. Submitted photo

Her mother’s variety store shared a building with her father’s plumbing business, which was in the basement. The master plumber had done some work for Attica Prison.

Her maternal grandparents, John and Mary Wade, owned the Harrison House, which later became known as the Randolph Hotel.

“My grandmother always fed the people who came by the back door of the hotel needing food. She never turned anybody away,” she tells. “I grew up in the time when people had nothing. I think we’re a throwaway society now.”

Her husband’s Grandfather Alexander was a pharmacist in the village.

She recalls some of the fun activities she did as a child such as roller skating in the community building, playing hopscotch, playing kick the can on School Street and, of course, watching movies in the theater her father had built. She remembers seeing “Gone with the Wind” when it was released in 1940, some of the Tarzan movies, and movies starring Humphrey Bogart. 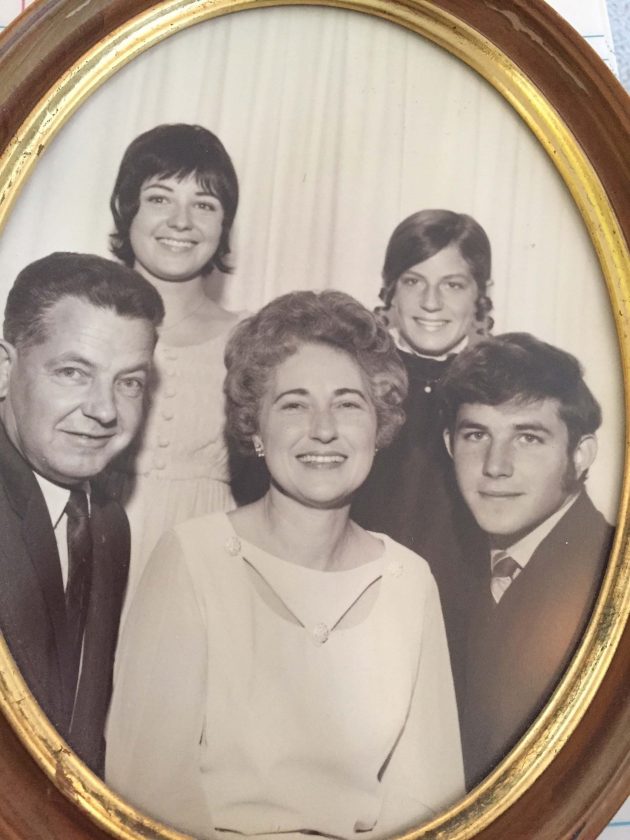 “We had a lot of fun and got home at dark. You couldn’t do anything bad because everybody was looking after you. Your child was everybody’s child.”

Her jobs while she lived with her parents were helping at her mother’s variety store and waitressing at The Green Pantry.

Mrs. Alexander graduated from Randolph Central School in 1940 at the age of 16, but went back to school for one more year after graduation, which was not uncommon for girls who graduated early. She attended college in Fredonia for two years and then went on to Mary Washington in Fredericksburg, Va., where she graduated in 1945 with a degree in music education.

The young woman’s first teaching job in Owendale, Michigan, was one she learned about through a teacher’s job location agency. She taught music to K-12 and band, chorus, civics and health to older students, but left that position after one year to return to Randolph to marry. 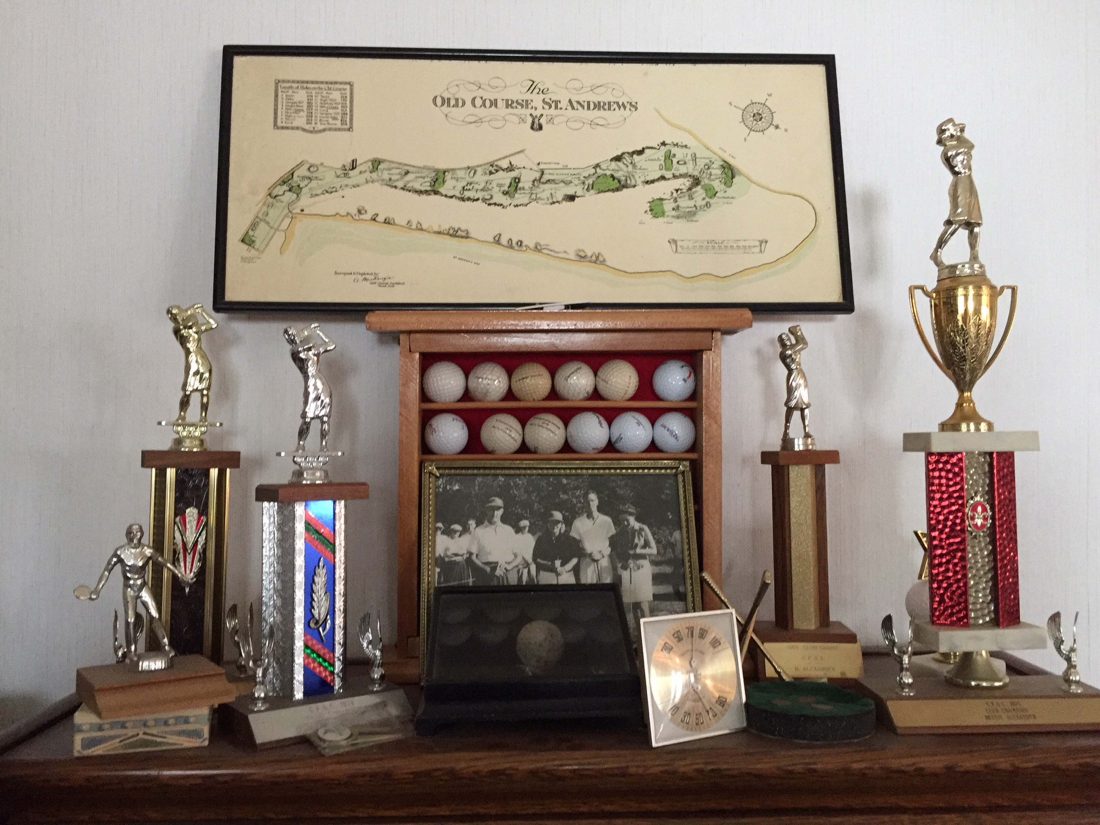 A few of the golf trophies won by Bettie Alexander. Photo by Beverly Kehe-Rowland

On Dec. 28, 1946, Bettie Keith married John Alexander, who she had gone to school with since first grade, when they attended a three-room schoolhouse on Church Street. Alexander, who had been stationed in Illinois while serving in the United States Army Air Force had earned a few credits at Knox College, where he returned after discharge. The couple eventually built a house in Galesburg, Ill.

In 1958 they moved to Lawrence Park, near Erie, Pa. where Mr. Alexander worked for John Hancock Insurance and his wife taught music in the Harborcreek school system.

The family moved back to the couple’s hometown in 1967, where Mrs. Alexander taught third grade until the music teacher retired, when she took over the position. Her husband worked at Borden’s as an office manager.

Her son and caregiver, Keith Alexander, remembers “Tuesday night and all-day Saturdays” as the days his mother taught piano lessons in their home.

“I guess my claim to fame was my golf business,” his mother says. “I’ve played since I was five and played in my first tournament at 12.” 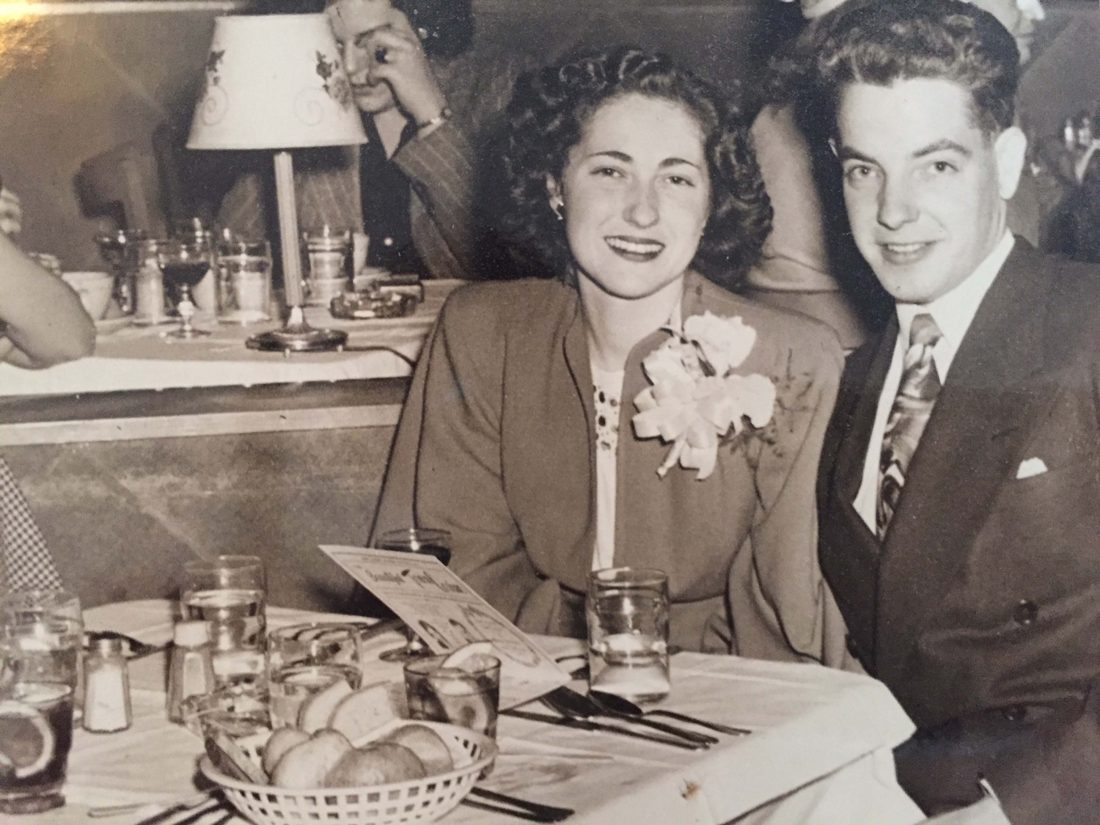 A honeymoon picture of Betty and John Alexander. Submitted photo

She won the Times-Herald Women’s Golf Tournament when she was just 16, the youngest person to win the event that covered Northwestern Pennsylvania and Southwestern New York.

“That was a phenomenon then, but in today’s world it’s nothing,” she states.

The avid golfer played in an exhibition match with Patty Berg, a professional golfer who ranks first in the world with the most LPGA major championship wins. Mrs. Alexander played golf with her husband, but he wasn’t as passionate as his wife. He enjoyed fishing in earlier years and remained an avid hunter. They traveled to Scotland, Bermuda, Canada and the Grand Tetons and enjoyed their timeshare on Hilton Head Island, S.C.

After her husband’s death, she traveled extensively, including trips to Europe, Africa and the Mediterranean. She was once in ten countries in nine days. She fondly remembers taking her mother on the Delta Queen, as trip that was cut short due to flood waters and the oil embargo.

“My mother had a ball flying a kite on the ship,” she recalls. 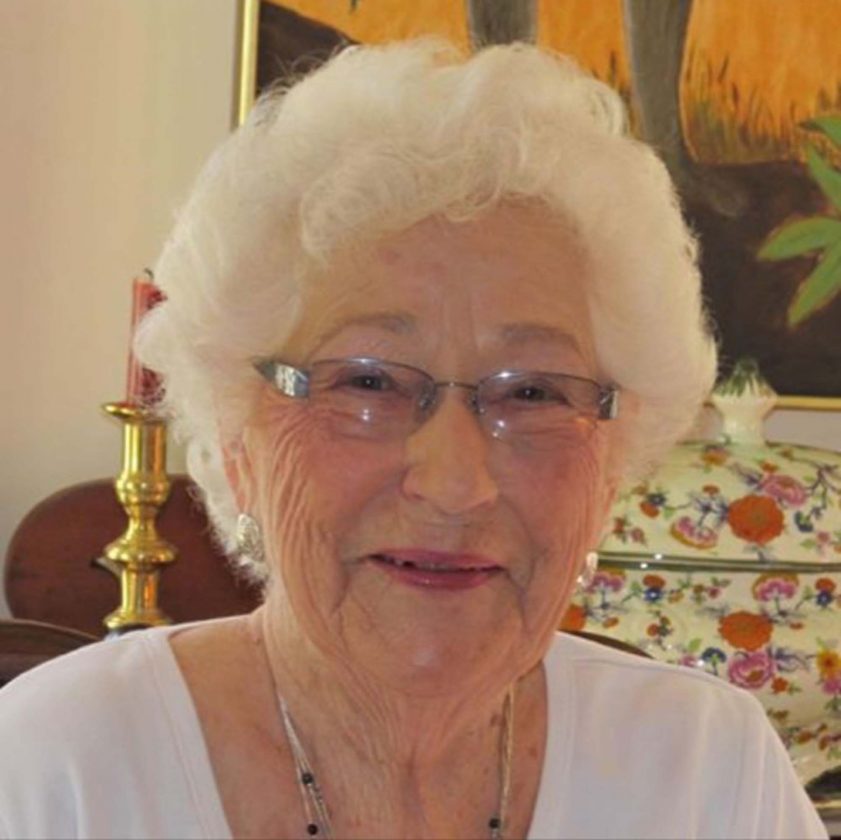 Ninety-six year old Bettie Alexander is happy to have been blessed by a community full of family members. Submitted photo

While reflecting on days gone by, she says, “I’ve seen so much and all that has happened from 1923 to present.”

Besides her son, whose home is in North Carolina, she has two daughters. Kathy lives in Virginia and Kim resides in Franklinville. She also has five grandchildren and six great-grandchildren and is a member of the Randolph United Presbyterian Church where she sings in the church choir and is a former choir director. She takes part in a weekly bridge group.

Her current home has been in the Alexander Family since 1933 or 1934. Her husband passed away in 1984, two years before she moved from their home across the street to the present location, where he grew up. She still continues her tradition of having a family Memorial Day picnic.

“Family is so important and we have such an extended family,” says the retired teacher. “I’ve been blessed beyond measure with family and friends.”