The Johnsons with their children and some of their grandchildren. Submitted photo

Lynn and Margaret Johnson when they were dating in February 1946 while Johnson was in the United States Navy. Submitted photo

The Johnsons on their 50th wedding anniversary. Submitted photo

The Johnsons on their wedding day, August 30, 1947. Submitted photo 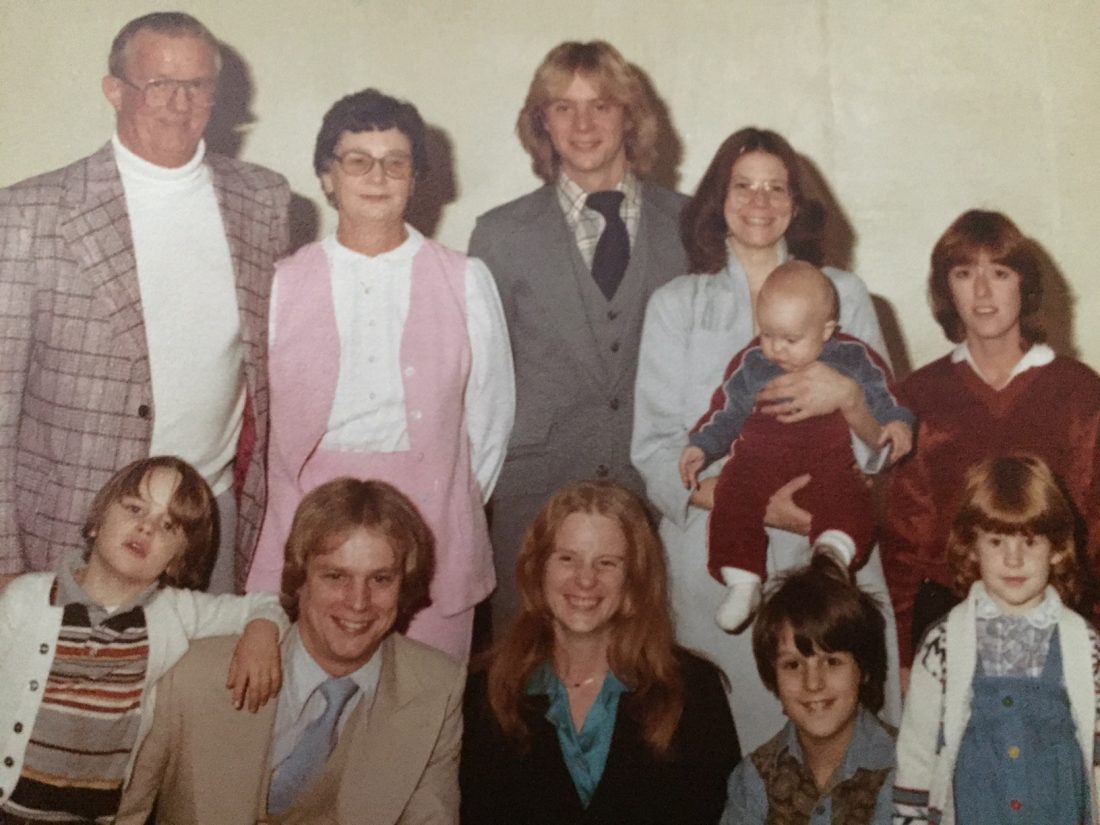 The Johnsons with their children and some of their grandchildren. Submitted photo

Some nonagenarians are blessed to see 70 years of marriage with their mates. Lynn and Margaret (Peg) Johnson are one of those couples who have been married nearly 72 years ago.

Lynn a life-long resident of Gerry is 91 years old. Margaret is 94 and has lived in many places. She was born in Philadelphia, where she lived briefly before moving to Detroit, Chicago and Watertown. Her father moved his family to Gerry to take over the restaurant that used to be at the four corners, renaming it Congdon’s of Gerry.

The daughter was a sophomore when she arrived at Cassadaga Valley Central School where she met her husband.

“I chased him until I caught him,” she says.

“I played a lot of sports in high school. All of the sports, really,” says her husband. 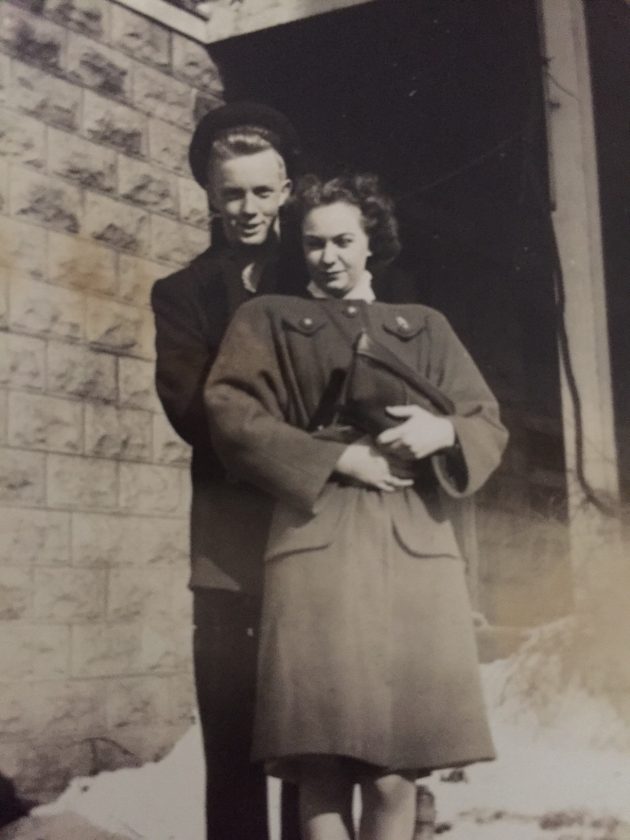 Lynn and Margaret Johnson when they were dating in February 1946 while Johnson was in the United States Navy. Submitted photo

He remembers a few occasions during World War II when he walked home from school after practice, seeing only three cars the entire five or six miles because gasoline was rationed. Both husband and wife recall blackouts during the war, when all lights had to be turned out when a siren sounded.

Lynn joined the Navy in 1945. He was sent to Chicago by train after basic training at Camp Perry, Va.

“I was sent to Chicago to be trained for electrical engineering, but I never made it. When I arrived, my feet were so swollen I couldn’t walk. A doctor who was on the train put me right in the hospital when we got to Chicago.”

The young soldier was diagnosed with rheumatic fever. He was eventually transferred from Great Lakes, Ill. to a hospital that specialized in rheumatic fever in Dublin, Ga. There were 40 men, one corps wave and one nurse in each ward.

“They were testing at that time. Penicillin was new. I gave a lot of blood for testing,” he says of his year-long stay in the hospital. 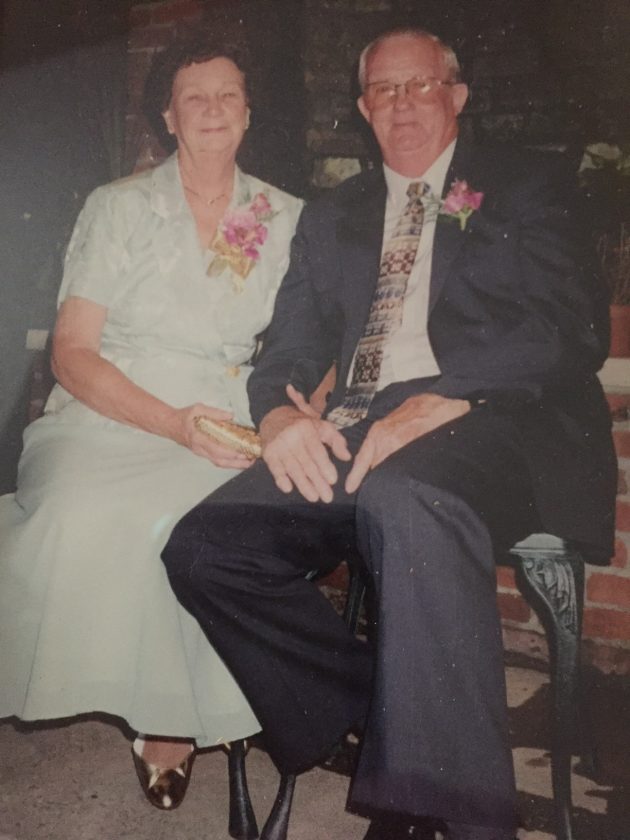 The Johnsons on their 50th wedding anniversary. Submitted photo

When his fiance went for a visit and decided she wasn’t ready to leave when visiting hours were over, she hid behind a piece of kitchen equipment and snuck back in to see him after hours. Her soldier received a medical discharge in 1947.

They were married August 30, 1947 at her brother’s house in Westfield, New York. Margaret stayed home until their youngest son was eight years old. Later she went to work at the former Jamestown General Hospital as a nurse. When the facility closed, she moved to Heritage Village Nursing Home in Gerry, where the couple resided. She served as assistant director of nursing at the nursing home. Three of the couple’s four children worked there at one time or another.

His picture was in The Post-Journal when he delivered mail by rowboat during flooding in the Fluvanna area. He was delivering Social Security checks because “people were waiting.”

It wasn’t unusual for him to climb up snowbanks to put people’s mail in the boxes they had set there after the snowplow had knocked them over. He tells about a woman who would await his arrival because he would deliver cigarettes to her. 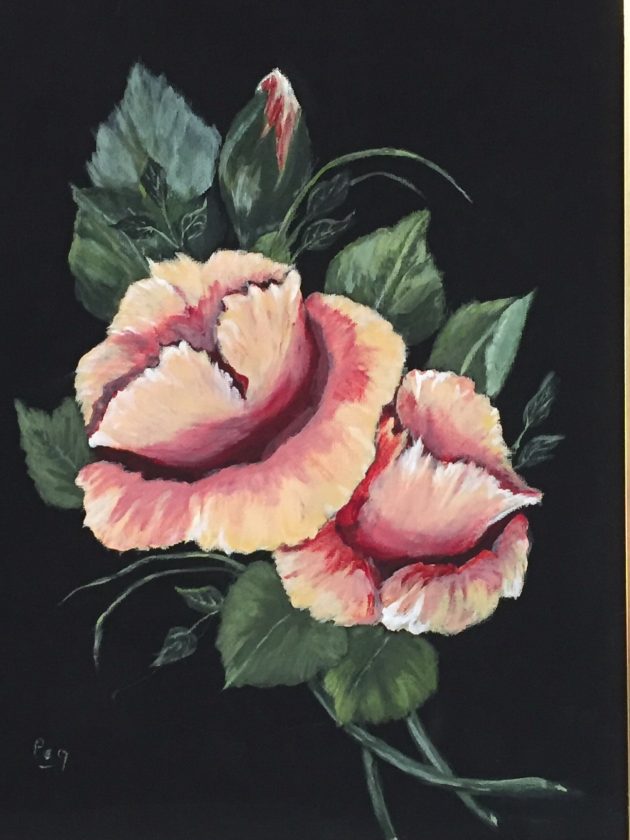 “She sat in a chair by the edge of the road until I came along. One old man called the post office and asked me to bring a loaf of bread and a box of snuff,” says the retired letter carrier.

He tells about another woman who would leave money for stamps “and a little extra for me to buy a cup of coffee.” Another woman would ask him to stamp her letters and tell him she would pay him later.

The delightful couple each retired from their jobs in 1983.

“I got the unique. I have been retired longer than I worked,” says the retired mail carrier.

The year 1983 brought more changes, as that was the year they sold their house on Church Street and moved to a hunting camp they had remodeled on Elwell Road. 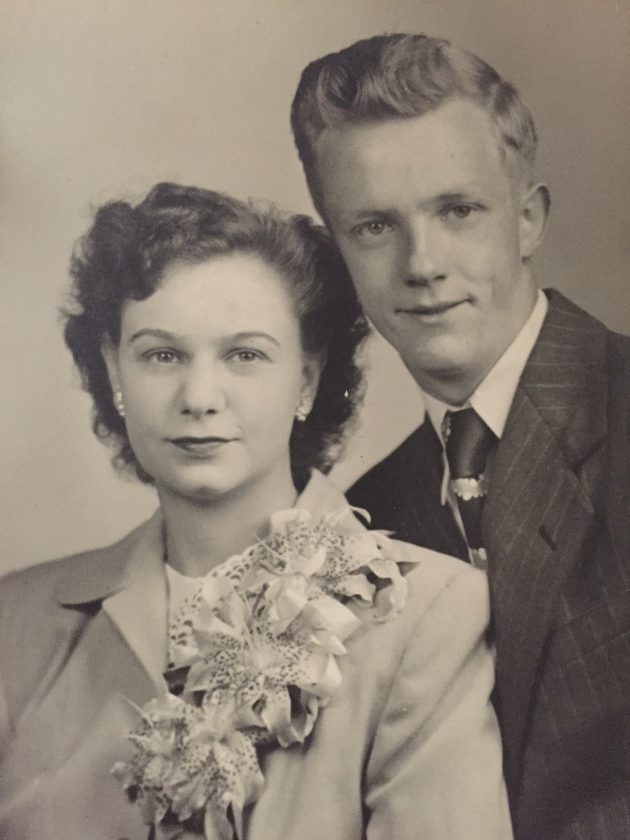 The Johnsons on their wedding day, August 30, 1947. Submitted photo

“In the meantime, we spent 20 winters in a park model RV (recreational vehicle) in Florida,” says Mr. Johnson.

He was an avid golfer, both in New York and in Florida. He has been a member of the Gerry Volunteer Fire Department for the past 70 years where the couple put many hours into the annual Gerry Rodeo.

“I worked in the first aid tent,” says the wife as she reminisces some interesting experiences that took place in that setting. “Once a cowboy was stepped on by a bull. He had a sucking wound, but said ‘Don’t send me to the hospital. Just put a Band-Aid on it, Ma’am.'”

Her husband managed the food stand where hot dogs, hamburgers and the famous roast beef dinners were sold.

The couple has traveled cross-country several times. They were members of the Gerry Travel Club attending monthly meetings and traveling with the group, as well as on their own.

“There were eight couples of us that traveled around. All are gone except for one woman,” says the elderly lady.

“I always liked painting but I never really had lessons,” she says.

Mr. Johnson attended Gerry Free Methodist Church his entire life and his wife has attended with him until recently when they started watching church on TV.

They are both cancer survivors.

“Their life has been so full, there is too much to remember,” remarks Pearl, the couple’s daughter and caregiver.

“I don’t know what we’d do without Pearl,” says her mother.

Several years after the couple had had three children, they adopted Pearl, who was the16-year old friend of their daughter and who had lived in the Gerry Children’s Home for many years. When the Children’s Home was closing, an aunt in another state said she would take the teenager to babysit her five children.

“They didn’t have to adopt me, but they did,” said the grateful daughter.

The Johnsons have two sons, Lynn III and Phillip and another daughter, Linda, who is deceased, six grandchildren and 11 great-grandchildren. They are very fond of their pet Blonde Cocker Spaniel named Jackson, who they rescued from the SPCA when he was a year old.