Salamanca Man, 90, Does Life His Own Way

Bill Steckman replaced flowers and shrubbery on three sides of his house with a dozen steel cut-outs. Photo by Beverly Kehe-Rowland

Jay-Gee, the Talking Weimaraner, would say 50 Words, drink from a bottle and play Hide and Seek with audiences. Submitted photo

Ninety-two year old Bill Steckman stands next to a carving depicting a bear chasing him up a tree. The idea came after a falling maple branch stripped several branches from an evergreen tree. Photo by Beverly Kehe-Rowland 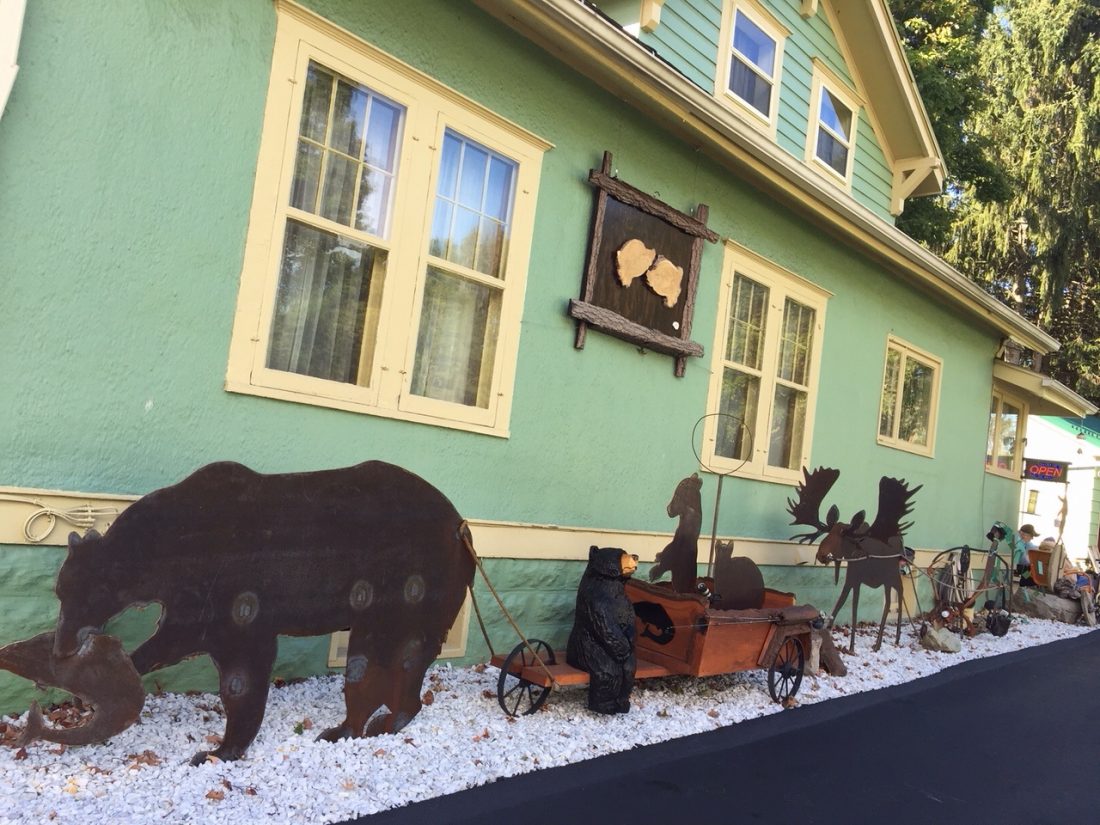 Bill Steckman replaced flowers and shrubbery on three sides of his house with a dozen steel cut-outs. Photo by Beverly Kehe-Rowland

SALAMANCA — When I think of nonagenarians, persons who are between 90 and 99 years of age, Bill Steckman of Salamanca comes to mind. Bill is one of the happiest, silliest people I know. He is also one of the most industrious, inventive people I know. He once told me he lays awake at night thinking of what he can do next.

He claims he fell in love with his late wife, Anna, in their earliest days of elementary school. Over the years they were in many of the same classes and attended the same Methodist youth group, but didn’t have their first date until the prom in their senior year of high school. They married on Aug. 23, 1951, but not until after the driven young man had paid off his newly widowed mother’s mortgage and his father’s medical bills.

He was honorably discharged from the United States Navy Seabees shortly before his father’s passing.

“I’ve been on just about every island in the Pacific,” he says. 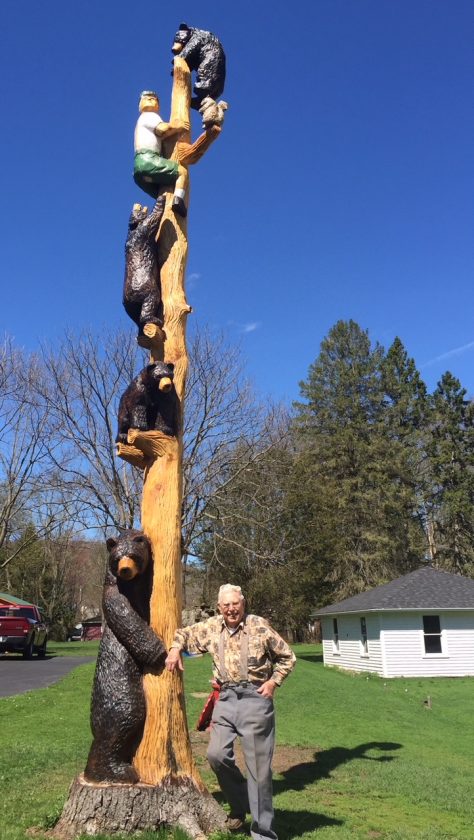 Ninety-two year old Bill Steckman stands next to a carving depicting a bear chasing him up a tree. The idea came after a falling maple branch stripped several branches from an evergreen tree. Photo by Beverly Kehe-Rowland

He had taken a job with the Erie Railroad when he was just 16 years old and still in school, allowing him to work weekends and summers. Therefore, a full-time job awaited his return from his 18 months of service. He has a lot of stories about his 43 years on the railroad, but then he has an abundant supply of stories to tell about every aspect of his life.

“They had lost a cook and because I was the youngest person, I had to take over. It was a great, big coal cook stove and hotter than blue blazes,” the happy man says. “I had no cooking experience. It was wicked the first few weeks, but everyone bore with me because I made everything they asked for.”

He rode a bike to the train station, which he stored in the baggage car, in order to have transportation to the store to purchase supplies.

“When I was first cooking, I didn’t know I was supposed to soak dried beans before baking them. When I poured them out, they sounded like bullets.”

The young cook was given permission from a local cannery to glean the fields after the pickers had gone through. The railroaders would watch for bees in the stations and return for the honey when they were dormant during cold weather. 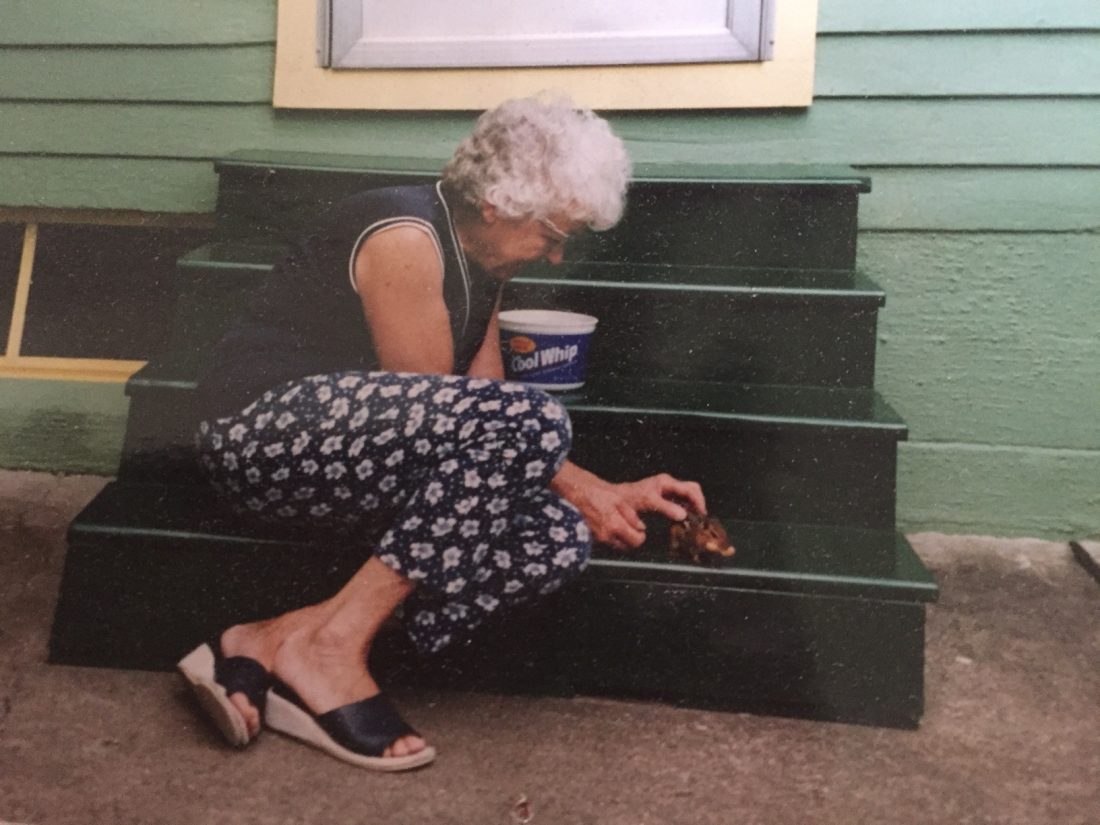 “The men liked honey on their oatmeal, but what a sticky mess it was cooking and straining it.”

“I had to get up an hour before the rest of them and I had to work an hour after them to clean-up and pack lunches for the next day. With time and a half, I made as much as the highest paid man.”

After the war was over, Steckman took a job working out of Bear Lake, Pa. The motor car he used on the rails had to be off the track 15 minutes before a train came through, therefore he would use that time looking for horseradish. He marked the spot with a stick and returned for it in the spring. In his first year on that job, he found a mail bag filled with Christmas cards and money.

“It had been thrown off in a snowstorm and missed the hook by a few thousand feet. The new kid on the block became ‘the special person that found the mail bag.'”

Because he didn’t own a car at that time, he would take a train from Salamanca to Jamestown, ride a bus to Ashville and then ride to Bear Lake with an agent who lived in Ashville. He boarded with Mrs. Johnson during the week where he ground the horseradish by attaching the grinder to the bottom basement step, making sure the door was left open. 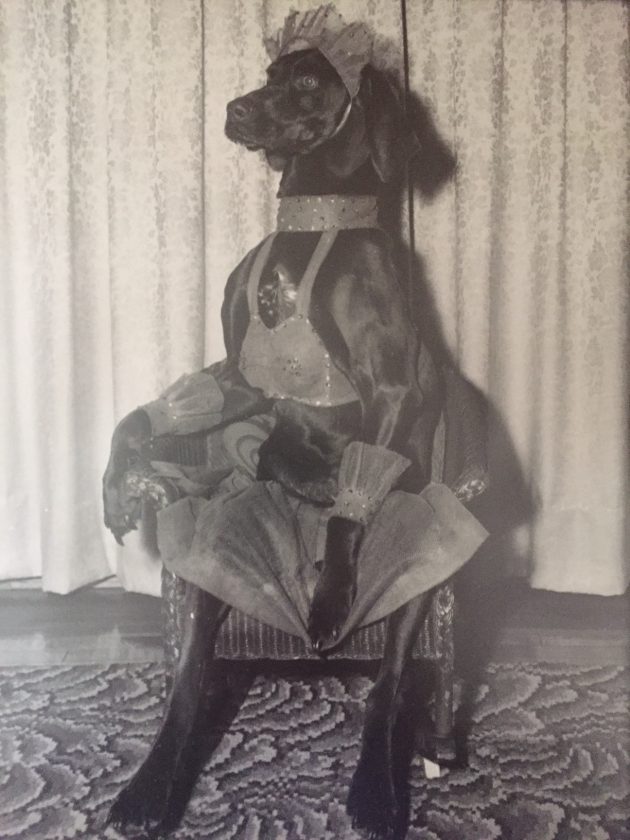 Jay-Gee, the Talking Weimaraner, would say 50 Words, drink from a bottle and play Hide and Seek with audiences. Submitted photo

Later, he drove his car from Salamanca to Gowanda and Olean, where he finished out his years on the job. He tells a story about taking sap buckets from maple trees and hanging them on telephone poles with the help of a friend, while working in Gowanda during sugaring season.

There was a time when the jovial man had an act he took out on the road. That is, he took Jay Gee, his talking Weimaraner, to locations in New York, Pennsylvania and Canada to perform for crowds of children and their parents. Not only did the canine speak 50 words, she winked, played hide and seek and drank from a bottle for the audiences. Aside from the things she did while performing, she could climb ladders, ride on her owner’s snowmobile and hunt. Johnny Carson’s secretary called three times, attempting to convince the couple to put her on the show, but when her owners learned she would have to be caged and travel in the plane’s baggage compartment, there was no more discussion.

The furry family member lived to be 16 years old, but the couple didn’t hear her speak for the first time until she was six. Her owner still remembers seeing his tears smudge the pencil lines he made when measuring knotty pine for her casket.

Over the years, the white-haired man has had many hobbies, with some becoming passions. Aside from being born during the Great Depression and when it was not acceptable to waste, Steckman has always had an eye for seeing a use for things others would consider cast-offs. During his years on the railroad, he became aware of several opportunities to take down buildings. He disassembled and transported two depots, a tool shed and a loading dock, as well as a coal shed and two houses that were not related to Erie Railroad. The materials were used to build a second house, which he refers to as his camp.

With a hammer and chisel, he cut and faced massive rocks he took from old foundations and those he hauled from along the road. He trimmed the cabin with millstones he took from an old house foundation and moved 5,000 bricks for the patio, which was 2,000 more than needed. He made steps leading to the porch from curb stones salvaged when the brick street in front of his home was paved

The camp’s interior is unique. The lower third of the first room is lined with more millstones. The ceiling light in the same room once hung over the telegrapher’s desk at the Perrysburg train station.

“Other than the couch, every piece of furniture, lamp and trim in this room is handmade,” he says of the living room. Most of the furniture is trimmed with moose antlers the elderly man collected on the couple’s 39 trips to Newfoundland. Approximately 50 taxidermy mounts hang throughout the house. There are five guest books with signatures of the people who crossed the threshold of their weekend home. The camp’s fence and two bridges were made from telephone poles collected when Kinzua Dam was built.

Another of the man’s passions was his antler-carving. More recently with his younger sidekick, Bill Skoken or “Young Bill,” he creates useful antler-incorporated pieces for the home. Among them are chairs, coffee tables, end tables, stools and lamps. They are currently excited over a supply of spalted maple wood and the uses they have found for it, as well as another supply with a red pattern made by a small, burrowing bug.

“I depend on this young whippersnapper,” he says of the man who is 30 years his junior.

Steckman no longer gardens, but once had blackberry and blueberry bushes and plum and apple trees and recalls planting 1,000 asparagus plants on a half-acre many years ago.

“I never sold a blade,” says the generous man.

He lost his beloved Anna or “Little One,” as he often referred to her, the day before they would have celebrated 66 years of marriage. He calls to and feeds at least three pounds of peanuts per week to the squirrels she so enjoyed handfeeding and remembers to leave bread and cracked corn for the birds.

Within a year of his wife’s passing, he took out shrubbery that had wrapped around his home since 1978. The soil and existing flowers were removed, as well, and replaced with a layer of limestone, then a mat to discourage the growth of weeds and topped off with crushed granite.

With his younger friend, he drew outlines on cardboard of various wild animals and whatever else came to mind. An Amish friend traced the patterns onto steel sheets, cut them out with a torch and then ground the sharp edges. The two Bills installed over a dozen cut-outs where the flowers and shrubs once were, including a moose, a mother bear and cubs, a lady pushing a plow, a money tree and a giant dinosaur.

The older Bill was given another opportunity to use his imagination when a large limb blew off of a maple tree, taking most of the limbs off one side of an evergreen on the way down. The widower decided to enlist the services of Rich Pratt, a chainsaw artist from Corfu, New York.

“He showed me pictures of his work and it met my expectations.”

After deciding the carving should be something other then the usual bear and eagle display, the artist suggested a scene depicting a bear chasing the elderly man to the top of the post. Before the project was completed, the bear was designed to look like he had torn a piece of fabric from Steckman’s pants, exposing pink polka-dotted underwear. Of course, the polka-dots was the idea of the ever-joking man.

“He came on a Monday with his equipment and supplies, put up his scaffolding and worked Monday and Tuesday, then it rained Wednesday and Thursday. He brought his two sons and a friend and it was done and painted by Saturday night. They took eight wheelbarrow loads of sawdust to the compost pile.”

Anna went along with her husband’s many ideas throughout the years, but when asked how she would have reacted to the alterations and additions made to their property over the last two years, he responds, “She would divorce me,” but quickly came back with, “Anna was the sweetest thing. She would have gone along with me.”

Nine decades of life would present hundreds of stories for the average person. In Bill Steckman’s case, there may be thousands and if he didn’t experience them, there is a chance the storyteller in him may have authored a few.

The widower’s general health is good, but his back and hip cause him to see a chiropractor on occasion. He still resides in the same house after 68 years, still tinkers in his workshop every day, still lays awake wondering what his next project will be, and still has a mischievous twinkle in his eyes. 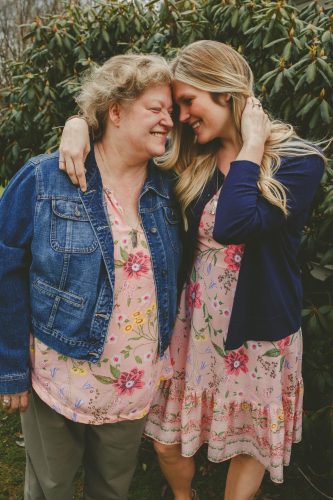 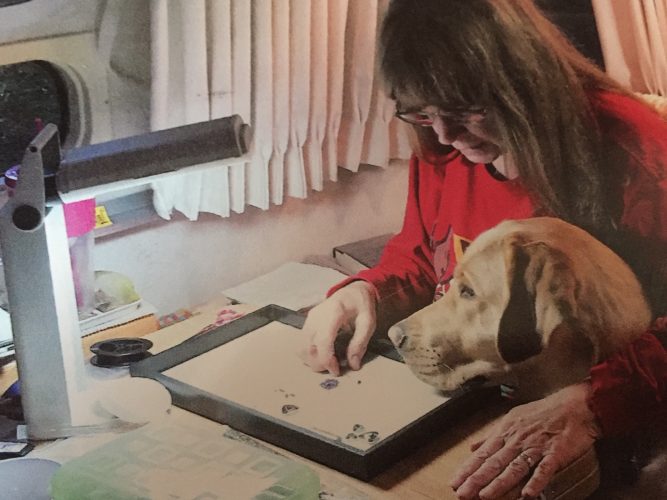 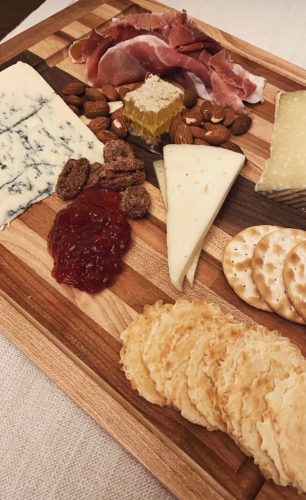 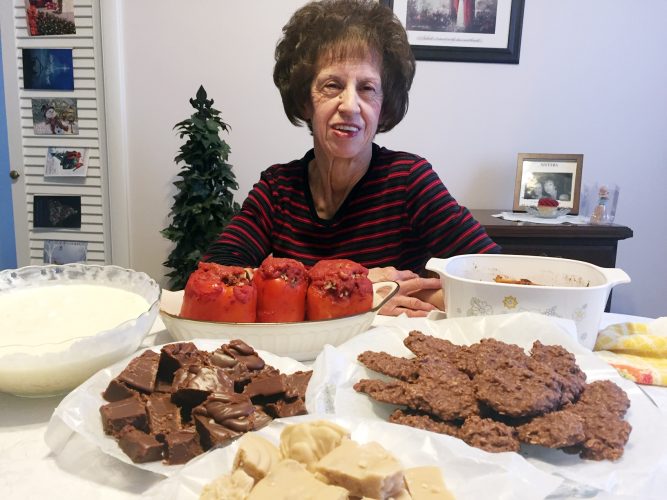