The Legacy is known for the baby grand piano.

A fish dinner may be ordered with broiled or deep-fried fish. Pictured is deep-fried fish, fries, macaroni salad and coleslaw. Photo by Beverly Kehe-Rowland

Nick Rhinehart, chef and owner of The Legacy Restaurant, has been cooking since he was a child. Photo by Beverly Kehe-Rowland

The Legacy offers dining on two levels. The lower floor has a pub-like setting, whereas the upper level offers a more formal setting, but is very family-friendly. A private meeting room is offered on the second level. Photo by Beverly Kehe-Rowland 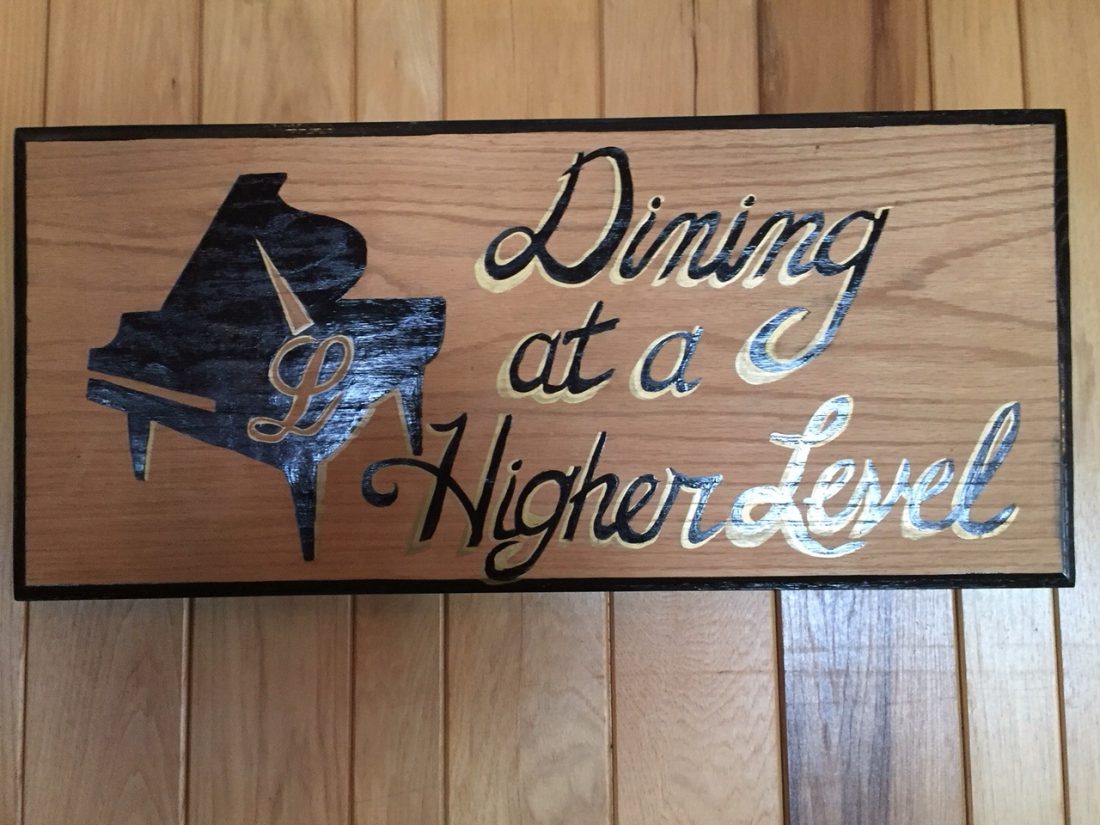 The Legacy is known for the baby grand piano.

When Nick Rhinehart was three, he told his mother he wanted to work in a restaurant and a year later he was making cream of wheat with his grandmother. By the time he was eight or nine, he had decided he wanted to own the restaurant and when he hit the teen years, he had upped his dream to not just wanting to own a restaurant, he wanted to be a chef. He was inspired by an older cousin who had gone to culinary school, won awards, made a series of videos about food preparation and became executive chef at a country club.

When the younger cousin was 13, he attended the elder cousin’s wedding in Louisiana. During the visit, the executive chef presented him with a chef’s hat and taught him how to make jambalaya.

The young man climbed the ladder of food service life, that is very familiar to most cooks and chefs. He started as a dishwasher at the age of 15, moved up to running the deep fryers. All the while, his older cousin was mentoring him on the rare occasion when their paths crossed.

After attending the culinary arts program at Ellicottville BOCES, Rhinehart continued his education at Louisiana Culinary Institute in Baton Rouge. While he was attending school, he worked in various restaurants, absorbing as many techniques and tips as he could.

Because of the time spent in Louisiana, he has become well-acquainted with the preparation of seafood and French and Cajun cooking. After he returned to New York State, he worked in the fine-dining restaurant at Seneca-Allegany Casino and as head chef at Public House in Ellicottville. During his last tenure, he saw a post by another restaurant owner saying The Legacy Restaurant may possibly be available for lease. He had thought he might open a restaurant closer to his Cattaraugus home, but ventured to look at the Springville location and knew he had to take the opportunity. 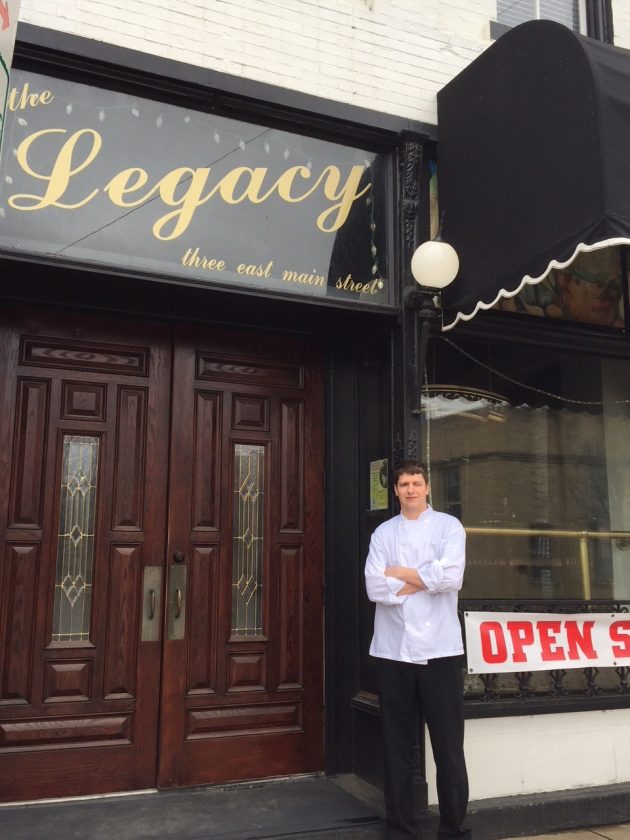 Nick Rhinehart, chef and owner of The Legacy Restaurant, has been cooking since he was a child. Photo by Beverly Kehe-Rowland

He liked what he saw when he walked into the building that had been used for a pharmacy, liquor store, pizzeria and more in the past and was renovated for restaurant use in 2000. The lower bar level impressed him with its pub-like setting for 40 occupants, but when he saw the beautiful, upstairs dining room with seating for 90, his mind was made up. He signed a lease and took over March 5.

Now, at 31, his goals are “good food and good atmosphere at affordable prices. It’s an every night place, not just for special occasions.

Ashley, the chef’s wife and part-time hostess, describes the upstairs dining room as “classy, but casual.”

A custom-made curved staircase, perfect for taking family, group or wedding party pictures, connects the two levels. The upper level has a more elegant look with its baby grand piano, mirrored wait staff station and black and white table linens. A small bar is adjacent to an area that can quickly convert to a private meeting area, by sliding glass dividers. Restrooms are located on both levels.

Casual and dressy attire are both suitable. Live entertainment is offered on occasional Saturday nights in the downstairs pub area, with the hope of comedians and trivia nights to come in the future. Guitarist A.J. Tetzlaff will perform on May 4, during Art Crawl Weekend. A pianist plays and sings songs by Elton John, Billy Joel, The Beatles and other upbeat, but soft tunes in the upper dining room on Friday and Saturday evenings. 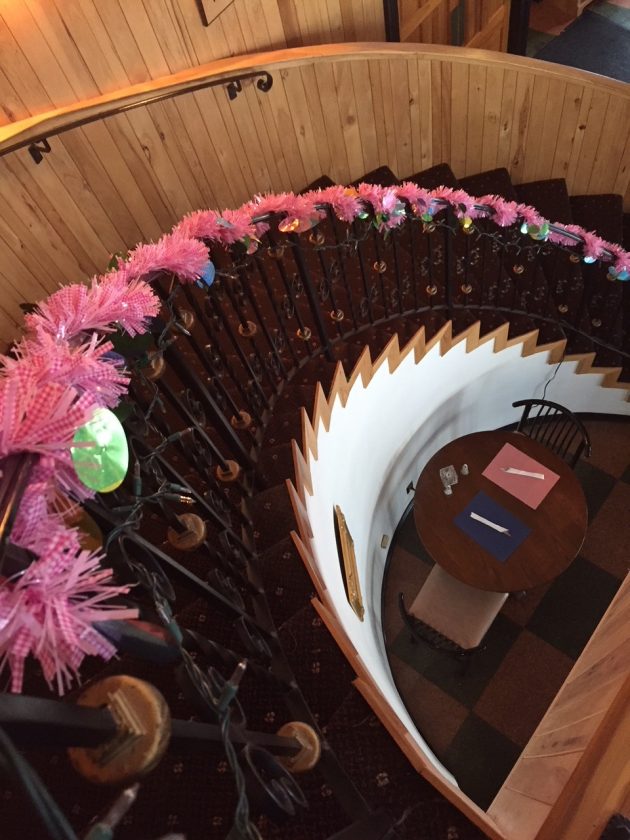 The Legacy offers dining on two levels. The lower floor has a pub-like setting, whereas the upper level offers a more formal setting, but is very family-friendly. A private meeting room is offered on the second level. Photo by Beverly Kehe-Rowland

The chef runs weekly specials on Friday and Saturday nights and is in the process of revising the menu, when more seafood and other options will be added. Prime rib is available on weekends with a new recipe and fish fries are served on Fridays. On Wednesdays 50-cent wings are offered from 4:30 to 8:30 PM.

Currently the establishment is open for lunch and dinner, but Rhinehart hopes to offer breakfast in the future. The wine list will be redone soon with bottles and house glass selections available. Other changes in the works are technology upgrades, more draft beer taps for the bar and an improved waiting area.

The hostess station was moved near the front door, but can easily be seen and reached by the side door.

“We want people to feel welcome when they walk in.” 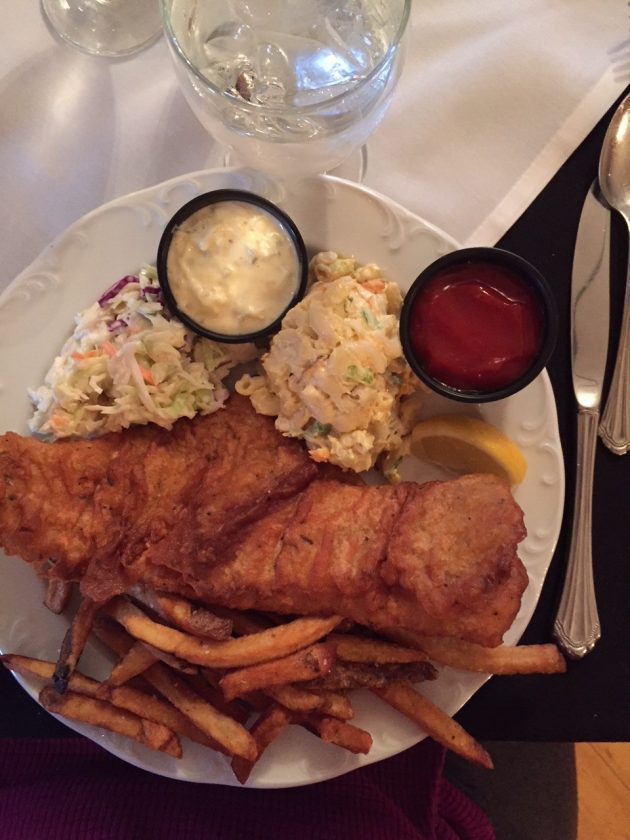 A fish dinner may be ordered with broiled or deep-fried fish. Pictured is deep-fried fish, fries, macaroni salad and coleslaw. Photo by Beverly Kehe-Rowland

The Rhineharts stress that even though the upper dining room appears to be more formal, children are welcome. Evidence of this took place a few weekends ago when the Easter Bunny entertained on the piano and ate breakfast with a large crowd of children. Crafts were set up for all to enjoy, along with a coloring contest. One hundred and thirty adults and children had Easter dinner when a buffet was set-up in the dining room last Sunday.

The business is currently taking reservations for a Mother’s Day Brunch Buffet to be served from 10 a.m. to 2 p.m. when there will be omelet and carving stations and a fruit and yogurt bar. Some other offerings will be breakfast potatoes, French toast, assorted baked goods and other dishes.

On-site and off-site catering is available for graduations, weddings, anniversaries, retirement, business meetings or whatever the need. A 4-foot-by-6-foot refrigerated trailer with two beer taps is available for onsite summer parties. The upstairs dining room has started to book for summer wedding receptions and there has been a booking for an actual wedding ceremony.

Ten employees from the past ownership have continued to work at The Legacy, including Dan McDermott, front of the house manager and Anthony Fisher, the sous chef who has been a great asset in the transition. Rhinehart’s father-in-law, Terry Foster, tends bar. His daughter, Brittany Foster is a dishwasher and will soon be a server. Dylan and Tyler Rhinehart, the chef’s brothers both wait tables and his parents, John and Amy do whatever is needed, such as maintenance and decorating.

Be sure to like The Legacy’s Facebook page to see daily specials, events and entertainment. The Legacy is located at 3 East Main Street, Springville, New York, a beautiful 65-minute drive from downtown Jamestown. The business opens at 11 a.m. every day. The kitchen hours are Monday through Thursday 11 a.m. to 8:30 p.m., Friday and Saturday 11 a.m. to 9:30 p.m. and Sunday 11 a.m. to 7 p.m.. The bar is open until 11 p.m. or midnight, except on Sunday, when it closes according to customer activity. Dinner reservations are not needed, but strongly suggested and can be made by calling 592-3300.

Preheat oven 350∂. Pat scallops dry with paper towel. In a large pan, start to crisp bacon. Cook until golden brown, but still soft and pliable. In small bowl mix salt, pepper and garlic and then sprinkle generously over scallops. Wrap each scallop with 1/2 slice of bacon and secure with a toothpick. In small pot, add brown sugar, ginger, blueberries and water. Cook on low heat until sugar is dissolved and blueberries are soft. In a large pan, heat butter on medium-high heat until melted. Add scallops and cook for 5 to 6 minutes. Flip scallops and top with brown sugar blueberry sauce. Bake in oven until sauce is carmelized, about 3 minutes. Serve immediately.

In a medium bowl, whisk together flour, cornmeal, baking powder, sugar, baking soda, salt and onion powder. In a small bowl, whisk buttermilk & eggs. Combine the 2 mixes by folding until just mixed. DO NOT OVER MIX BATTER. Cover and refrigerate for a minimum of 1 hour or up to 24 hours. Preheat oven to ” warm setting” or use heat lamp. Pour enough oil into pan to be 2-inches deep and heat to 350∂ or use a deep fryer. Drop 1 tablespoon batter into oil. Continue working in batches, but do not over crowd. Fry until golden brown, approximately 3 to 4 minutes. Remove to paper towel lined pan to drain. Transfer to baking sheet and place in oven or under heat lamp to keep warm. Serve with tartar sauce or ketchup

To prepare chutney, melt butter in nonstick skillet on medium-high heat. Add apples and saute for 4 minutes. Add the remaining ingredients. Bring to a boil. Reduce heat and simmer for 8 minutes or until apples are tender. Stir occasionally. Prepare pork while chutney is simmering. Combine all ingredients except pork. Sprinkle dry mix on both sides of all pork. Heat a grill pan over medium-high heat. Spray with cooking spray. Add pork to pan and cook 4 minutes on each side or until done. Serve with chutney.

Drop green beans into boiling water and cook 3 minutes. Pull out and immediately place into ice water to cool. This is also known as blanching. Heat butter/oil in large skillet on medium-high heat. Add pepper, beans and garlic and cook until hot, approximately 3 to 4 minutes. Serve immediately.

Heat butter in sauce pan. Add bell pepper, onion and garlic. Cook until tender. Add heavy cream and Dijon mustard. Bring to a simmer and then remove from heat and set aside. In a medium bowl, mix crab, mayonnaise, parsley, lemon, salt and pepper. Add cooled cream mixture and 1 cup bread crumbs. Form into 2-ounce patties and coat with remaining bread crumbs. Chill in refrigerator for at least 1 hour. To cook, add 1 teaspoon oil to saute pan over medium-high heat. Cook crab cakes on each side until golden brown. Serve immediately. 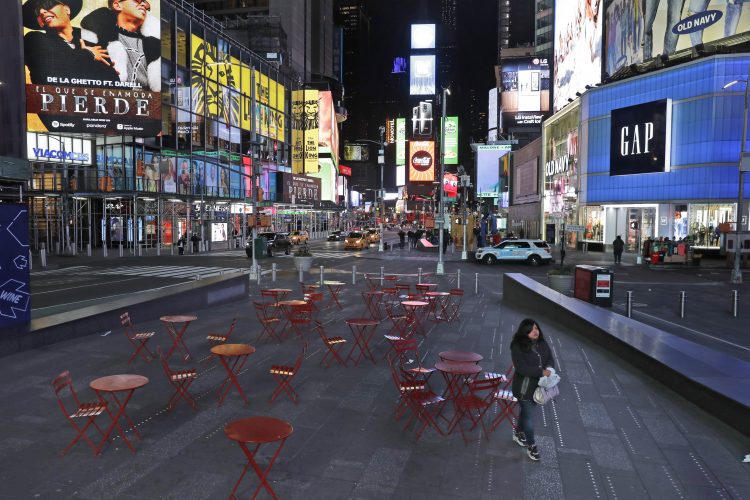 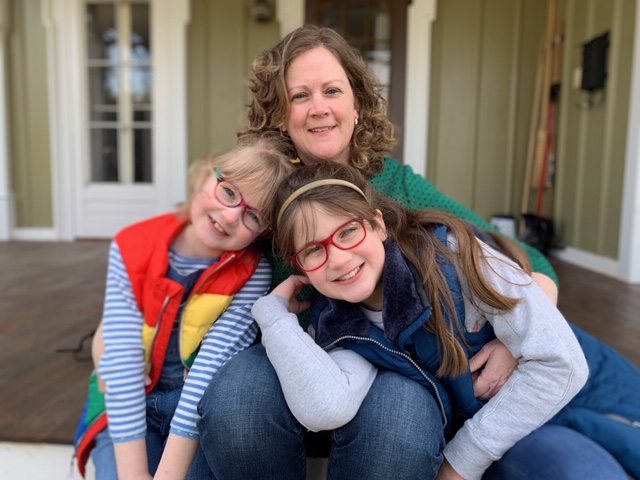 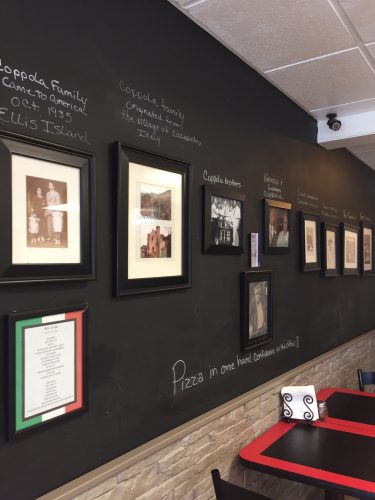 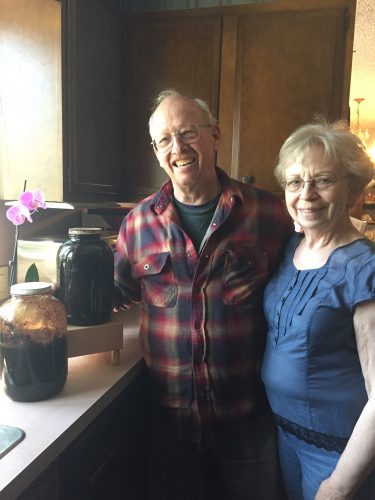 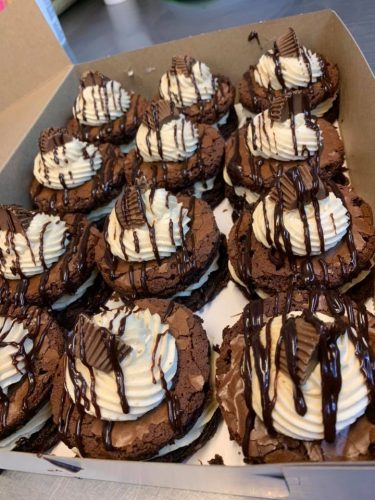 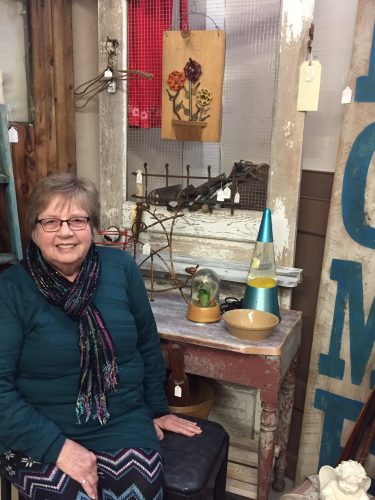