AMC?Warns It May Not Survive The Pandemic 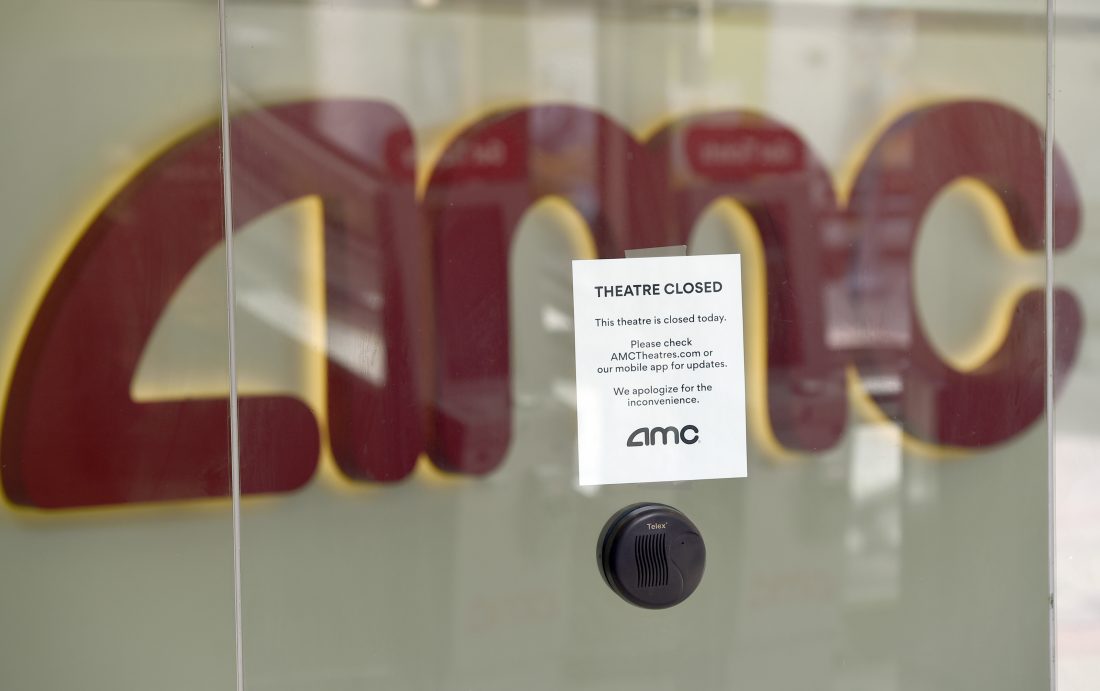 In this April 29 photo, a message on the ticket window at the AMC Burbank 16 movie theaters complex informs potential customers that it is currently closed in Burbank, Calif. AMC says its business is suffering because of the coronavirus pandemic and it may not survive. All of the company’s theaters are shut down through June, and while the theaters are closed the company is generating no revenue. AP photo

Movie theater chain AMC warned Wednesday that it may not survive the coronavirus pandemic, which has shuttered its theaters and led film studios to explore releasing more movies directly to viewers over the internet.

It’s the latest danger sign for the theater business in North America, which was under pressure even before the pandemic. It has gotten a boost by raising ticket prices and revamping theater-going into a more luxurious experience with drinks and meals, but admissions have been gradually declining since 2005. The box office has become home mostly to blockbuster films: Sequels, remakes and superhero movies dominate. Meanwhile, the rise of streaming services — Netflix and a growing stable of rivals — is providing new competition.

The coronavirus pandemic threw in more challenges. U.S. cinemas shut down in March, so their owners haven’t been taking in money. Hollywood halted film production, which is likely to delay movies once theaters reopen and may limit consumer eagerness to spend money at the multiplex. The pandemic has prompted entertainment companies to release some movies directly to consumers, raising concerns that more will bypass theaters in the future. And when theaters do reopen, it’s not clear how many customers will want to be in enclosed, crowded spaces for hours at a time.

AMC, the largest U.S. chain, said it has enough cash to reopen its theaters this summer as planned. But if it’s not allowed to reopen, it will need more money, which it may not be able to borrow. Film delays are another concern. AMC noted that people may be afraid to go to theaters, but hopes the desire for social distancing is temporary and that people will want to go to the movies again.

“Due to these factors, substantial doubt exists about our ability to continue as a going concern for a reasonable period of time,” AMC wrote in a regulatory filing. The publicly traded company, controlled by Chinese conglomerate Dalian Wanda, has 1,000 theaters in the U.S. and Europe.

Cinemark, another major movie chain that is on more solid financial footing, plans to begin reopening U.S. movie theaters on June 19. It said in a Wednesday filing that it believes it has enough cash to last it the rest of the year, even if its theaters remain shut. The company’s CEO, Mark Zoradi, said he doesn’t expect the industry to return to normal until 2022.

Cinemark on Wednesday said it’s taking a slew of measures to tempt back moviegoers as it reopens. Those include discounting and vigorous cleaning protocols for theaters, like disinfecting seats in the mornings and before each showtime. It will also require employees — but not customers — to wear masks and will stagger showtimes to thin out crowds.

The company also said it would stay in the black even if local governments only allow it to sell half of its seats to keep customers separated, which the company expects governments will allow for most places in the U.S. by mid-July. Cinemark CEO Mark Zoradi said that even “below that level,” the chain’s theaters can be “very, very profitable.”

Local rules for theaters vary across the U.S. New York City has not even begun to reopen, and California hasn’t gotten to that phase of its reopening yet. In Texas, theaters are allowed to be at 25% capacity.

Theater chains are also concerned that film studios could push more movies straight to the streaming services that they own. Since the pandemic shut down theaters, entertainment companies have delayed most movies. But Comcast’s NBCUniversal released “Trolls World Tour” on video on demand in April, triggering an angry response from the theater industry, and Disney will release “Artemis Fowl” to its streaming service, Disney Plus, in June, rather than theaters.

“There is no denying that production delays, social distancing protocols and a general feeling of caution by movie patrons is going to pose challenges,” said Comscore media analyst Paul Dergarabedian in an email. “This is going to be a marathon, not a sprint for the industry.”