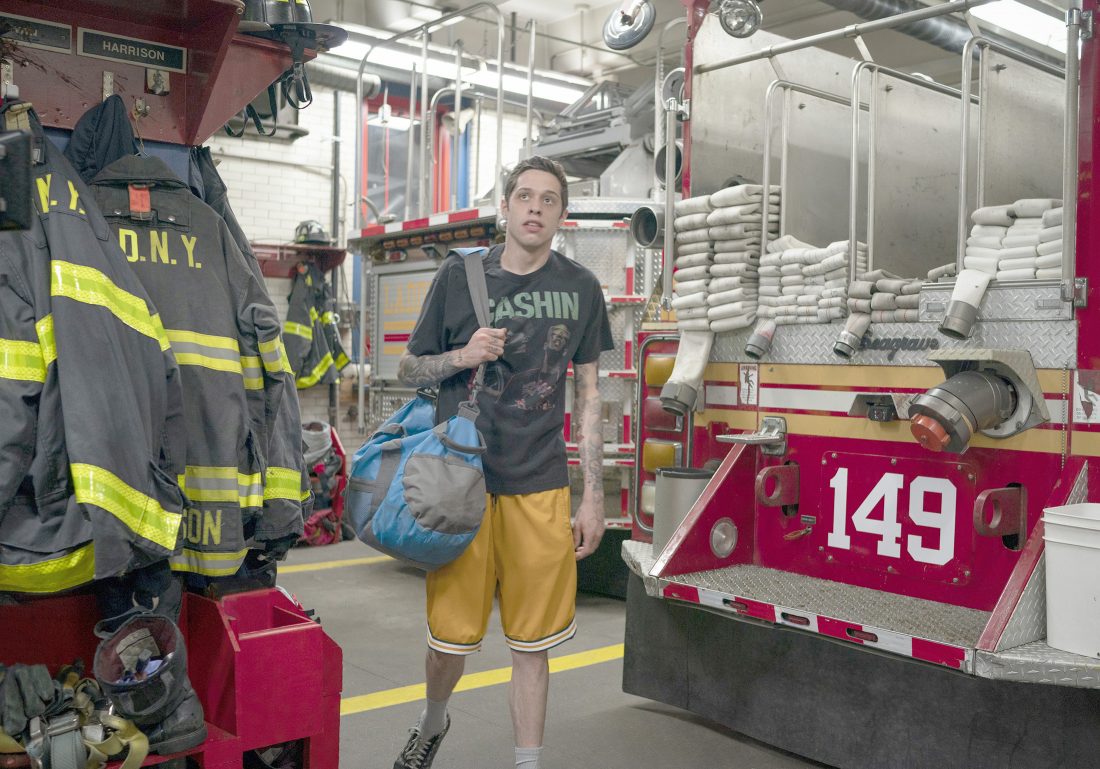 NEW YORK (AP) — The first time Pete Davidson performed stand-up, he was 16. It was in front of a handful of people at a place called the Looney Bin Comedy Club in Staten Island. He describes it as inside a bowling alley and a Wendy’s and across the street from an LA Fitness.

“Which is the most Staten Island thing I ever heard,” says Davidson. “I remember when it wouldn’t go well, you could hear people bowling and getting strikes and spares.”

As a standout performer on “Saturday Night Live” and the star of Judd Apatow’s new “The King of Staten Island,” the 26-year-old Davidson would normally be able to reflect on those humble origins from a higher perch. But because of the pandemic — and since he was about to move when the lockdown began — he’s back in his mother’s house in Staten Island, living in the basement.

“This is my basement but it’s also my bedroom, which is even more embarrassing,” says Davidson, smiling on a recent interview by Zoom with his bed in the background.

It’s an ironic place for Davidson to be since “The King of Staten Island,” a comedy Davidson co-wrote with Apatow and Dave Sirus, begins with him playing videogames in his mom’s basement. The movie is about him getting off the couch, reluctantly making something of himself and finding some peace with the death of his father.

In appearances on Weekend Update, he often uses his own life for punchlines, self-deprecatingly and bemusedly drawing on the media coverage that has followed him through mental health issues and a high-profile romance with the pop singer Ariana Grande.

And yet Davidson feels widely misunderstood. “The King of Staten Island may change that. The movie, he says, “is 100% me.”

“I personally don’t think people have a good idea of who I am, which is another reason why this movie is so important and dear to me,” says Davidson. “It’s as transparent and honest and open as I could possibly be. I hope that if you do see it, maybe you see what I see in myself.”

Universal Pictures will release “The King of Staten Island,” originally slated to open the SXSW Film Festival, on Friday via on-demand after its theatrical run was cancelled by the pandemic.

The movie is heavily based on Davidson’s own life. His character is struggling with the death of his father, a firefighter who died in the line of duty. When Davidson was 7, his firefighter father, Scott, died on Sept. 11. In the film, Davidson’s feelings of heartache and anger are challenged when his mother (Marisa Tomei) begins dating a firefighter (Bill Burr).

“It’s something that’s been weighing on my chest for a very long time,” says Davidson. “It allowed me to heal on a personal level. My main goal in doing this was to grow out of it.”

Apatow, the filmmaker of “The 40-Year-Old Virgin” and “Funny People,” first became acquainted with Davidson when he was making 2015’s “Trainwreck,” with Amy Schumer. Apatow has shepherded the careers of several young comic talents, like Seth Rogen (“Knocked Up”) and Lena Dunham (“Girls”), but Davidson’s seemingly lackadaisical, bug-eyed version of stunted maturity is more plainly wounded than his previous collaborators.

At Schumer’s urging, Apatow gave Davidson a small role in “Trainwreck.” Then they began kicking around movie ideas.

One of their first scripts, a college comedy, fizzled. “Pete hadn’t been to college and I had only been for 18 months,” chuckles Apatow, speaking from his home in Los Angeles. Then they inched toward something more personal.

“As soon as we said, ‘Let’s make a movie about his character’s mom dating a firefighter,’ we knew that we’d have to address everything,” says Apatow.

Davidson hasn’t avoided his father in his comedy. In his recent Netflix comedy special “Alive From New York,” he recalls learning his dad did cocaine. “I knew he was a hero,” he says with a grin. “But I didn’t know he was a superhero.”

And the comedian had contemplating mounting a one-man show about his father. Instead, “The King of Staten Island” became his autobiographical outlet. They took it slowly. The writing, Apatow could tell, was cathartic.

Davidson could have been seen by some as a risky bet. In 2018, a troubling Instagram message prompted a police visit to the “SNL” offices. But Apatow believed that Davidson should also be a producer on the film, making him responsible for the entire set.

“I’ve been through a lot and to have someone believe in you and still have your back even when it might not be popular to do so, it really means the world to me,” says Davidson. “I’ll never forget that.”

For those who know him more from the tabloids, “The King of Staten Island” will certainly reveal a different side to Davidson. It has as much emotional pain and tender family drama as it does clouds of weed smoke and man-child jokes. Like Davidson, it’s full of the messiness of life.