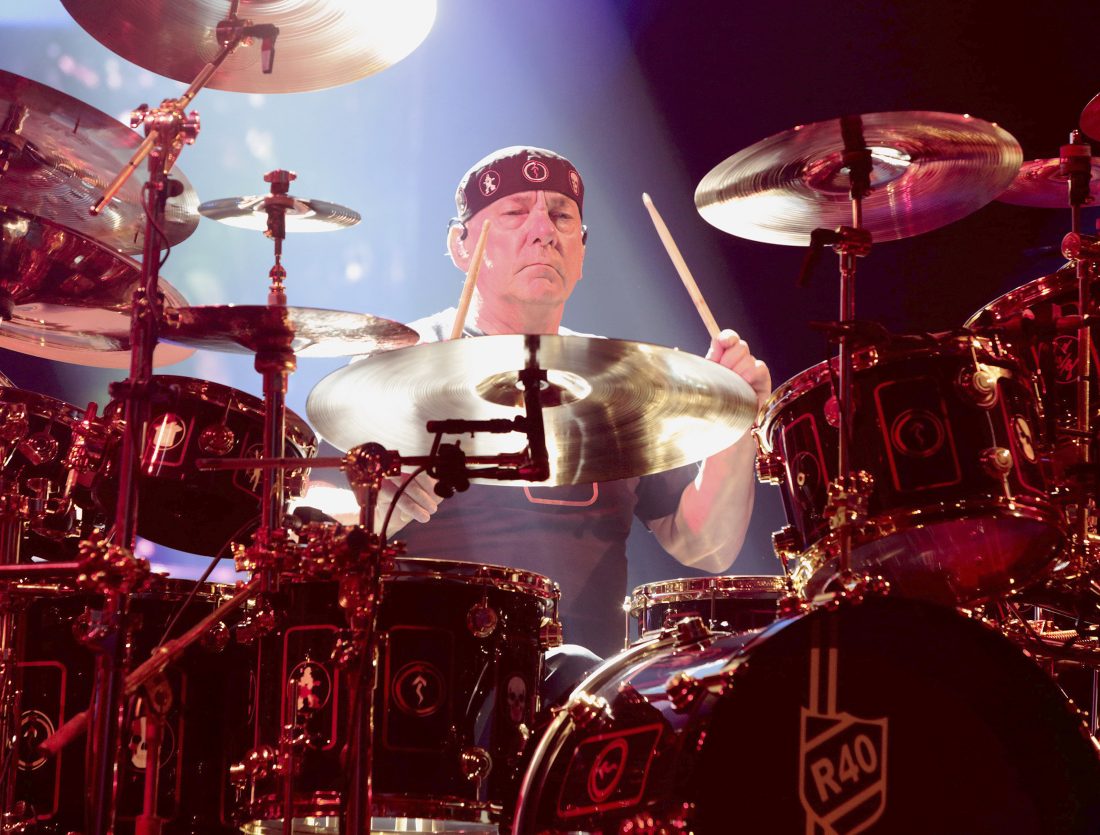 FILE - This June 25, 2015 file photo shows Neil Peart of the band Rush performing in concert during their R40 Live: 40th Anniversary Tour in Philadelphia. Peart, the renowned drummer and lyricist from the band Rush, has died. His rep Elliot Mintz said in a statement Friday that he died at his home Tuesday, Jan. 7, 2020 in Santa Monica, Calif. He was 67. (Photo by Owen Sweeney/Invision/AP, File)

If you are a drummer or not, Neil Peart probably found a way into your conversation about music.

The virtuoso drummer for Rush died Jan 7., of brain cancer.

Bassist Geddy Lee, and guitarist Alex Lifeson, released a statement found on Rush’s website rush.com. “It is with broken hearts and the deepest sadness that we must share the terrible news that on Tuesday our friend, soul brother and band mate of over 45 years, Neil, has lost his incredibly brave three and a half year battle with brain cancer (Glioblastoma). We ask that friends, fans, and media alike understandably respect the family’s need for privacy and peace at this extremely painful and difficult time. Those wishing to express their condolences can choose a cancer research group or charity of their choice and make a donation in Neil Peart’s name. Rest in peace brother.”

He was more than just a drummer in a famous progressive rock band.

From 1974, to 2015, when Peart announced that he retired from drumming, he forever changed the way a drummer approaches his parts. He was the foundation of a power trio that made music. And to their diehard fans it was great music.

Since 1978-1979, Rush has been one of my favorite bands. I had heard parts of “All The World’s a Stage,” Rush’s first live album, but then in 1980, the band released “Permanent Waves.” Listening to that album made me want to play drums more and made me more aware of the bass guitar of which I started taking lessons in the fall of 1980. It was a glorious time for music. So many bands had taken to the airwaves and had released new material. It was a listener’s market.

Peart redefined drumming for many drummers including me. Then 1981 arrived and so did “Moving Pictures.” From that, the band’s most recognizable anthem, “Tom Sawyer” was released. That opening drum pattern was enormous and set up the song perfectly. To me, that’s when I knew Peart was a musical genius. Like most of Peart’s drum parts, the part to “Tom Sawyer” is difficult to master because of its intricacies. I saw Rush twice play live during the “Presto” and “Roll the Bones” tours. Both times, I left the venue in awe of the band and how it re-created almost exactly what was heard on the recorded versions its songs and of course, Peart’s solo.

Both times I returned to Jamestown, and put away my drumsticks for a good week because I lacked the skills to become the next Peart. But then I realized that many other drummers are in my league, so I took out my drumsticks again with caution.

Not one for the limelight, Peart rarely did press or gave interviews, but when he did, the knowledge he shared about songwriting and drumming were inspiring to say the least. If you research on Youtube, you will find interviews with him. The interview that stands out, in my opinion, is the one he did with George Stroumboulopoulos on The Hour TV show. It can be found on youtube.com/watch?v=q–mKr28G7og. Peart details track by track “Moving Pictures” and what it took to record that album.

He possessed a precision to his playing that only a few musicians ever achieve.

According to The Associated press, Peart, alongside bandmates Lee and Lifeson, were inducted in the Rock & Roll Hall of Fame in 2013, and honored for combining “the signature traits of progressive rock with a proto typical heavy-metal sound.”

“We’ve always said it’s not something that meant a lot to us, but we knew our fans cared so much to be validated like that – that their favorite band like their favorite sports team should be celebrated as champions,” Peart told The AP when Rush was inducted into the Rock Hall. “We always knew that was the case and certainly to see it blossom after this is a testament to the truth of that.”

Not only a drummer, he was gifted lyricist whose words took listeners to different places figuratively and literally.

Lyrics that have always resonated with me are from the song “Subdivisions,” from “Signals.”

In the high school halls

In the shopping malls

Conform or be cast out

Peart is also an accomplished author.

He has had six books published including “Far and Near: On Days Like These,” Far and Away: A Prize Every Time,” “The Masked Ride: Cycling in West Africa,” “Ghost Rider: Travels on the Healing Road,” Traveling Music: The Soundtrack To My Life and Times,” and “Roadshow: Landscape With Drums, A Concert Tour by Motorcycle.”

Peart is survived by his wife, Carrie and their daughter, Olivia Louise Peart.

Many people have taken to social media, and quoted his lyrics to pay their respects to him. Mine are from the song “Presto” from the album “Presto.”

If I could wave my magic wand

I’d make everything all right.