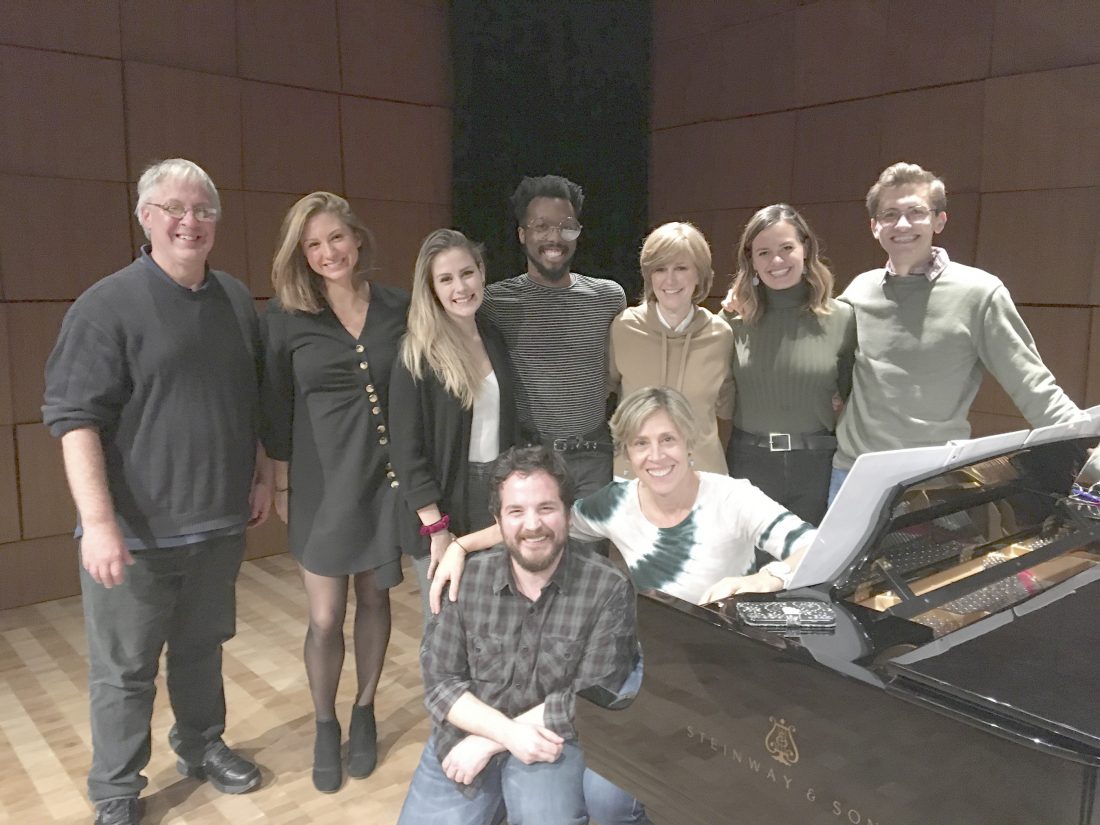 When he is not busy writing, he is busy rewriting.

For John Keating, revision is what he does when writing books for new musicals.

“For me, I’m always, always rewriting. That discipline comes from my education in Journalism at Point Park University in Pittsburgh, Pa.,” he said.

Keating, four years retired after a 20-year teaching career at Sherman Central School, spent many weekends commuting between his Mayville home and Pittsburgh. In the Pittsburgh he joined the Musical Theatre Artists of Pittsburgh (MTAP) and quickly became recognized for his many theatrical abilities, he said. In addition to writing the book for his first musical, “Mistress,” with Sandra Lowell, also of Mayville and a former music teacher at Westfield Academy and Central School, Keating took charge and self-produced five new musicals for area writers, composers and musical theatre performers.

His writing process begins each day at 6 a.m., because he said, he works best in the morning. When writing a new book he begins with a story idea that interests him. It’s usually a subject that he knows and cares about.

“Then, of course, you need to find a lyricist and composer. Both help move the narrative along, develop the characters and both help tell the story. A favorite musical theatre question is what comes first — The music or the lyrics? After you hear the wrong answer, you tell them it’s the book. A good musical, whether it’s “Oklahoma” or “Hamilton” have a book to work from. Once you have collaborators, the work begins. I tend to go from the beginning to the end. I work best in the morning. I write maybe 6 a.m. till 9 a.m., then I think about my writing all day. Then, hopefully, I can return to the work later that night, maybe 9 p.m. till 11. The next day I rewrite what I wrote. I learned from the Irish playwright, Hugh Leonard that writers rewrite. Simple, right, but hard,” he added.

While handling the business side, he started a writing collaboration with Linda Marcus, an English professor at the University of Pittsburgh and David Berlin, a composer at Carnegie Mellon University.

His story took a tragic turn when Linda, his lyricist, passed away from surgery complications, he said. Keating, suddenly, had the choice to abandon his musical idea for “I Do and Do Again” or find another creative team. Being a member of the Dramatists Guild in New York City, he posted a listing on the organization’s “Blackboard” and got many responses. Two artists from The Big Apple, composer Betsy Hirsch and lyricist Roberta Smithline, immediately showed an interest.

For the next seven months, he said, the collaborators never met face-to-face but shared their ideas, dialogue, lyrics and music through iPhone calls, text messages and emails. They wrote and rewrote regularly. Finally, in December 2018, they knew they had a solid working relationship.

Keating said the difference between writing for a play and a musical is collaboration. “Again, it’s collaborators. Usually, when writing a play, it’s just you and the pen, you and your laptop. With a musical, your work is constantly being seen, reviewed, changed by the lyricist and composer. Usually, a book writer for a musical “loses” their best lines of dialogue because the lyricist “steals” them for a lyric in a song. So you better not be a person who takes things too personally. If you do, you’ll never last,” he added.

And by contrast, Keating said, the there are similarities writing for a play and musical. “The grind is similar, but that process is the best part; it’s what gets the adrenaline going every day. It’s seeing that your vision might one day be performed before an audience that is receptive to your creativity. Not bad. It’s what makes the Arts so special, and why it’s essential for young people and schools to provide support for the Arts,” he added.?In June, Keating and his creative team had an Act I completed with eight scenes and nine songs. He said he then put his “producing” hat back on and began casting and organizing a read-through of the project. With help from friends at Point Park University, the now retitled show, “If Not Now When,” had a professional reading at the Steinway & Sons recital room at 43rd and Sixth on Nov. 7 in New York City. Hearing the work for the first time was thrilling, but there was something else that Keating will never forget.

Keating said he finds his characters through his love of history. “For 20 years, I was a social studies at Sherman Central School, so thru my love of history, I find characters,” Keating said. “When my wife, Jill, was doing summer stock theatre at Theatre By The Sea in Matunuk, Rhode Island, I was studying Irish Lit and History at Providence College. By the end of that semester, I had found my characters for my first musical, “Mistress.” Charles Stewart Parnell, an Irish Party leader, and Katharine O’Shea, his English mistress were real people. Presently, my second musical, ‘If Not Now When’ which is now renamed ‘Just Beyond Balboa’ is combination of people my wife and I have known through the years and created characters,” he said.

So how did a history teacher get interested in musicals? “I have my mother to ‘blame’ for that,” he joked. But jokes aside, his father was a former main gate manager at Chautauqua Institution when Keating was growing up, and his dad would bring the family every summer from Bradford, Pa. to Chautauqua. Keating noted that after the symphony would finish its evening concert at around 11 p.m., rehearsals would begin for the musical. “Mom would let me stay up for the rehearsals, but the story goes, I usually fell asleep,” he said.

His wife also exposed him to musicals. He said it’s through her experiences in New York City on tour with the Broadway production of Roger Miller’s “Big River” and in various summer stock locations, that he saw musicals a lot. “I saw musicals all the time and studied how stories were crafted. That’s when I said to myself, ‘I want to write a musical.’ Finally, I was lucky to be employed at Playwrights Horizons, an off-Broadway theatre and worked for Artistic Director, Andre Bishop, now the Artistic Director at Lincoln Center,” he added.

Keating noted the theater had one main purpose — to support playwrights, new plays and new musicals. “So, in a short period of time, I observed first-hand Stephen Sondheim and James Lapine write ‘Sunday in the Park’ and ‘Into The Woods,’ Alfred Uhry and ‘Driving Miss Daisy’ and Wendy Wasserstein and ‘The Heidi Chronicle,'” he said.

After the recent reading, the plan for Keating is for more rewriting and finishing Act II and to have a fully-staged second reading again in New York City next summer.