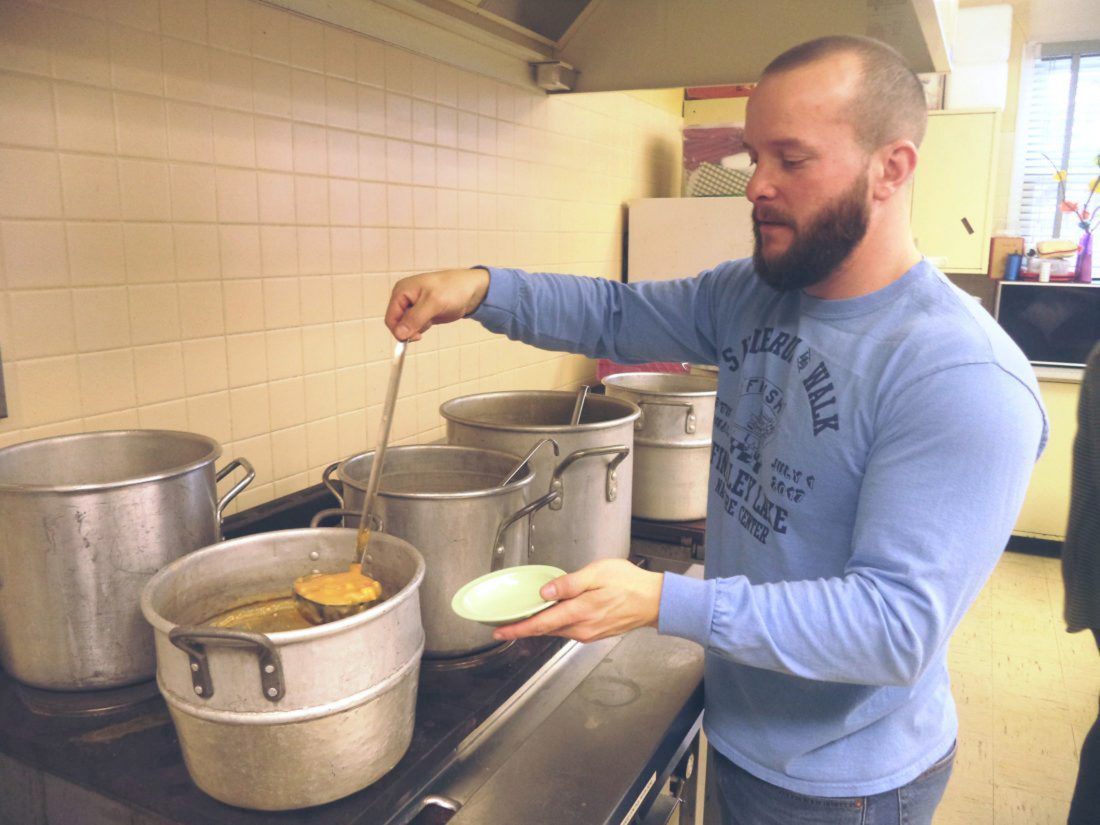 Dan Larson is pictured during 2018's Soup-Fest in Findley Lake. This year’s event will take place from 11:30 a.m. to 2 p.m. on Sunday. Photo by David Prenatt

FINDLEY LAKE — When the weather is dreary, nothing beats a bowl of homemade soup to warm you up and lift your spirits.

For nearly a decade, the Alexander Findley Community Library’s annual Soup-Fest in Findley Lake has helped people fight off winter. This year’s event, which will take place from 11:30 a.m. to 2 p.m. on Sunday promises to continue the tradition.

“Soups are always a good draw and a comfort,” said Nancy Roche, co-organizer of the event. “Plus, it’s definitely soup season, and getting homemade soup is a treat.”

This year there will be at least seven soups, including some that have become favorites from favorite sources. Pine Junction will be donating its chicken wing soup. Joanne Malecki is making stuffed green pepper soup. Molly Branigan’s is providing shrimp and bacon chowder; the French Creek Tavern will be making its famous french onion soup; Bistro 210 at Peek’n Peak is making beef stew oup; Nelson Harper will provide vegetable soup; Alexander’s is providing chili; and New Harvest restaurant will make beef barley soup,

Of course, there’s more to the soup-fest than just soup. Patrons enjoy homemade bread, salad, a beverage and desserts.

All of the food is donated. French Creek General Store provides the bread, Calvert-Pearson Insurance Agency donates bottled water, and various people throughout the community provide salads and desserts, which include sheet cakes, bar cookies and brownies.

But don’t wait until the last moment to stop by. Many of the soups are s popular that they consistently run out long before 2 p.m. For instance, library volunteer Malecki said she will be making a double batch of her stuffed green pepper soup this year because it never lasts.

Although it has been a long-running event, members of the community never tire of the soup-fest. Malecki said she feels some of its popularity stems from the option to sample many different soups or to simply enjoy one’s favorite.

Roche explained that the library used to have a food event nearly every month, but the soup fest was the most popular.

“This one was always successful,” she said. “I think it’s because they are local chefs and local people who provide the soup.”

As usual, there is no set charge for the soup luncheon. The library relies on donations, and every year, the people of the community come through, making this a successful fundraiser.

While everyone in the area looks forward to the soup fest, some of the factors affecting the outcome are beyond control. “How well we do really depends a lot on the weather,” said library director Melissa Froah. “Nevertheless, it’s fun and everybody really likes it, so we encourage everyone to come.”