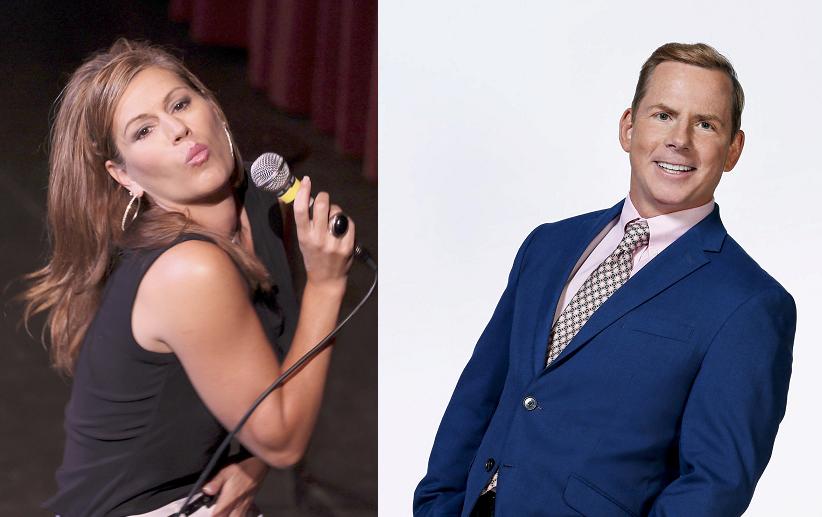 Husband and wife comedy duo Tom Cotter and Kerri Louise both clearly remember where their paths to the stage began.

Both share similar starting points on the journey that will bring them back to Jamestown for a New Year’s Eve 8 p.m. show at the Reg Lenna Center for the Arts.

They are the youngest of their respective families. Tom and Kerri were always the kids striving for attention and ready to crack a joke to get it. When they each got their first taste of what a professional comedian really was, they were hooked.

“I had LPs of Richard Pryor ‘Live on the Sunset Strip’ and George Carlin’s ‘Indecent Exposure’,” Cotter said.

“Those two I could recite verbatim. I would sneak those into my house and put a blanket over the stereo so no one could hear. We would listen to the albums because they were filthy and recite it for our friends. My parents were devout ‘Tonight Show’ fans. The ‘Tonight Show’ was a big thing with Johnny Carson and if I was good, which was rare, my parents would let me stay up to watch Carson’s monologue. I loved watching Johnny interact with his guests.”

Looking back on the history of stand up comedy, to subversive and incendiary pioneers like Lenny Bruce, Cotter’s introduction seems fitting.

Much like her husband, Louise recalls breaking a few rules during her own informal comedy education.

“I had to crawl and sneak out of my room because I wasn’t allowed to watch it.”

Early stand ups like Lenny Bruce and Carlin had to fight against obscenity laws and public outrage, and there is always some element of that rebellion that fuels successful performers.

That and, of course, the need for attention.

“I have an unsubstantiated hypothesis,” Cotter said.

“Which is that the youngest needs more attention. To stand out I kind of needed to act out by saying inappropriate things and making people blush. I haven’t done the formal study but I’m telling you, the youngest is the recipe for stand up comedy.”

Cotter had the benefit of launching his career in and around the Boston comedy boom of the 1980s. During those days, bars and restaurants were in New England were just as likely to have a live comedy show on tap as they were a live band, if not more. Not to mention all of the successful comedy clubs that populated the greater Boston area, forging future stars like Marc Maron, Louis C.K. and Joe Rogan.

“It was an unbelievable comedy proving ground at the time,” Cotter recalled.

“Starting in the late 1980s it was the tail end of the boom in Boston. There were lines out the door at clubs, there were comics who couldn’t even take a night off.”

After meeting Kerri in 1995 and continuing to grow his own career, Cotter and his management decided that a move to New York City or Los Angeles made the most sense.

The decision was made to stay on the East Coast.

“We just said screw it, threw caution to the wind and never looked back, we’ve been here for 20 years,” said Cotter, who now lives in the greater New York City area.

The New Year’s Eve show will be presented in part by the National Comedy Center, which Cotter and Louise had the opportunity to visit when it was opened in 2018.

As one of the rare couples in show business where both husband and wife are professionals standups, it is always a pleasure to get to play in the hometown of pioneering comedy marriage.

“We always have a blast up there. We love the size of the town and the passion that people have for Lucy,” said Cotter.

“People are nostalgic for the comedy team thing, especially in Jamestown where you had Lucy and Desi, one of the best comedy teams ever. We are begged to do that.”