Donna The Buffalo To Perform At Spire Theater Saturday 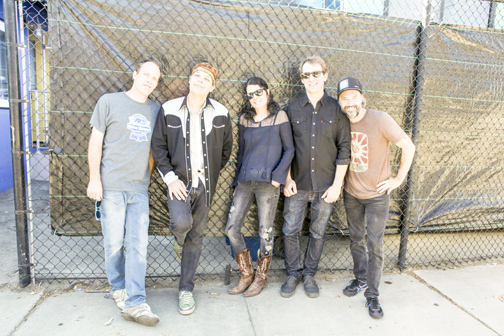 The grassroots band from Trumansburg, N.Y. has developed a large following and continues to draw new fans to the community, aptly named The Herd.

But co-founder Tara Nevins would say it’s something about the grooves and accessible melodies of the band’s songs that attract people.

“Our Songs have given folks something to hold on to, to freshen daily life with a groove that gets people up on their feet every time,” Nevins said. “Jeb Puryear and I are the two original members. We’ve never questioned what we are doing. Loving what we do and having our loyal following, the Herd, has certainly made weeks turn in to months turn in to years and so on and so forth. We’ve also always been a grassroots operation, doing everything ourselves, within our own community. We’ve always owned our own bus.”

Nevins said the band met while a group of friends were playing old time fiddle music. “That’s how we met. A few of us also wrote songs. We’d get together and would play those original songs for fun, first on fiddles and banjos. Somewhere along the way we started picking up electric instruments,” she said.

According to the band’s website, donnathebuffalo.com, in 1989 Nevins and Puryear landed their first gig in a Trumansburg restaurant setting both on their musical path. Puryear took note of Nevins’ songwriting ability. “The first person I met that wrote songs that sounded like you could hear them on the radio,” he wrote on the website.

Nevins and Puryear write the songs for the band.

Nevins added when writing music, she sometimes draws from personal experiences or will begin writing a song with an outside idea.

“We bring them (songs) to the band either already arranged or as a band we arrange them,” Nevins said.

“Our history is so long and very successful musically,” Puryear wrote on the website. “She’s my best friend — we’ve done this forever. It’s a big part of what makes it still interesting to do. We definitely have a good, rough-and-tumble, super-longstanding respect and love.”

In 1991, the band started the Finger Lakes Grassroots Festival in Trumansburg. The website said the four-day festival has become an annual destination for more than 15,000 music lovers every year and was started as an AIDS benefit. It continues as a benefit for arts and education. To date, the event has raised hundreds of thousands of dollars and is now one of three Grassroots Festivals; the Bi-annual Shakori Hills fest in North Carolina and Virginia Key festival in Florida. In 2016 GrassRoots Culture Camp was introduced in Trumansburg as four days of music, art, dance and movement workshops, including nightly dinners and dances.

Nevins who plays fiddle, accordion, guitar and scrubboard said that communicating through music has never been a conscious choice. “I’ve just always done it,” she said.

Donna The Buffalo will perform Saturday at 8 p.m. at The Spire Theater, 317 E. Third St., Jamestown. For more information, visit the band’s website.