Author Talks To Students At WACS 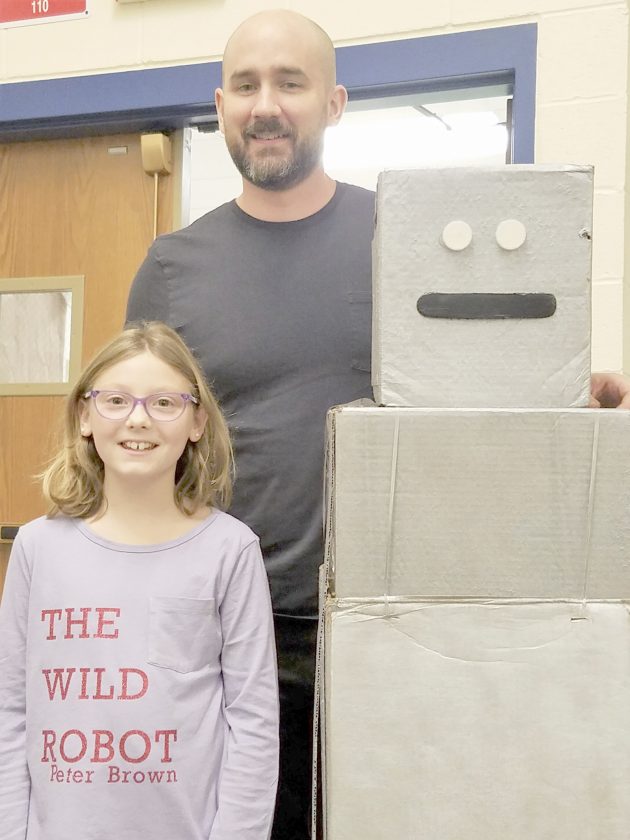 Author and illustrator Peter Brown stands with fourth-grade WACS student Raegan Luce beside a model of Roz, the robot from Brown’s book The Wild Robot. Luce, who said she loves the book, wore a custom-made shirt for the occasion of Brown's visit. Submitted photo

“How would a robot react to the wilderness and how would nature react to a robot?”

That’s the question that Caldecott-honor author and illustrator, Peter Brown, asked himself in creating his book, The Wild Robot, he told students at Westfield Academy and Central School.

Brown visited WACS on Nov. 7 to give presentations to students in the fourth, fifth, and sixth grades and to share his story of becoming a famous author and illustrator of children’s books.

Brown told students that he loved drawing when he was a child and he shared a drawing he created at the age of five. “I call this Blue Horsey with Sunshine,” he said. “It actually was my ‘blue phase’ because I was drawing everything in blue.”

Brown said his grandfather loved painting and drawing and was an inspiration to him. “I used to think that someday I wanted to be an old man making art,” he said. “Now look at me. I’m getting old and I’m making art.”

Brown said he wrote and illustrated his first book, The Adventures of Me and My Dog, Buffy, when he was 6 after his dog was missing of a night. “I couldn’t stop wondering what my dog was doing all night,” he said.

Brown went on to describe how he began to read a lot. He also enjoyed cartoons and, in particular, Disney movies. He read books about the making of Disney movies and discovered that there was a great deal of work that goes into them.

“It occurred to me that every cartoon I ever watched had to be made by adults,” he said. “I decided that this was the kind of adult I wanted to be.”

Brown said he began to study books on drawing, especially animals. “I practiced and I got better. I would go to farms and draw the animals.” By high school his drawings of “horseys” had gotten a lot better, he said.

In college, Brown said he took a course on writing and illustrating children’s books “I had a lot of fun and I decided that this was what I wanted to do.”

Brown told his audience that after college he moved to New York City where he began to get his books published. The Curious Garden, which was published in 2009 and won multiple awards, has one of his drawings on the cover, he said. “I probably did 40 or 50 cover sketches before I did the one on the cover,” he said.

Brown said that while he was working on The Curious Garden, he drew a picture of a robot in a tree, and he realized he had drawn two opposite things, one natural and one unnatural. Brown began reading books about robotics, artificial intelligence and nature, he said.

“Nobody had written a robot survival story,” Brown said. “So, I invented Roz, the robot.” The story had to take place in the future and a rugged, northern island seemed like a perfect setting for my story, he said.

Having read Brown’s book, The Wild Robot, the students knew what the tale is about and understood how Roz began to see patterns in nature and how she learned many things from an orphaned gosling.

Roz adapts to life on the island and makes it her home, Brown said, but he knew that there was more to her story. “In the second book, I decided to have Roz working on a farm,” he said. “So, I asked, what would farming look like in the future?”

Brown said he read all that he could about life on a farm and how technology is changing farming. He told the students that he also visited several farms in different parts of the country. It was necessary to decide the type of farm and the kind of farmers that would be included in the story, he said.

Students will not only have the opportunity to read Brown’s latest book, but each of them will have his own signed copy of The Wild Robot Escapes. WACS librarian, Melissa Zastrow, said BOCES has provided a copy of the book for each student.

Zastrow said the students love Brown’s books. “Every year I read The Wild Robot to the fourth graders and they absolutely love it,” she said.

Fourth-grade student, Raegan Luce, who sported a custom-made Wild Robot tee shirt to the event, thought it was amazing. “I think this is incredible,” Luce said. “The presentation was really good, and I’ll definitely read the sequel.”