An Amazing Evening With Buddy And Kenny 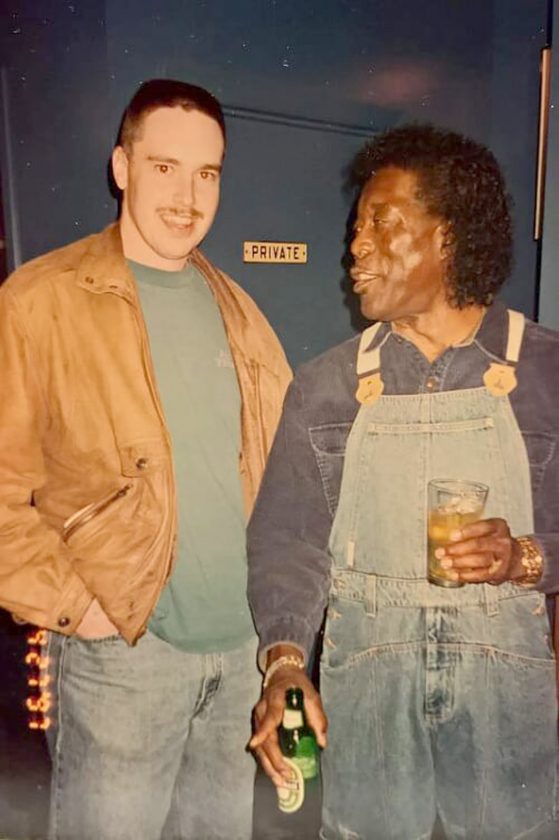 I had an opportunity to photograph two legendary bluesmen and I would like to share a story about how I once met Buddy Guy and my travels across the ocean with Kenny Wayne Shepherd. OK, I didn’t travel with him in the physical sense, but I’ll get to that in a moment.

It started when I was at the Naval Training Command in Great Lakes, Ill. right after graduating boot camp. It was a cold April 27, 1997 evening and a few buddies and I decided to catch a train to Chicago to explore the city. Only two of us were old enough to enter bars, so we mostly walked around downtown visiting shopping centers and such.

As evening turned to night, the younger group hopped the train back to base and my friend Joe and I stepped into a blues club called Buddy Guy’s Legends. As we entered, there was an ensemble of musicians on the stage enjoying a jam session including Buddy Guy, Steve Cropper and Matt “Guitar” Murphy of the Blues Brothers Band, and Joe Louis Walker. Not having any extensive experience in blues music, I walked into the greatest introduction to Chicago blues that anyone could ask for.

When the jam session was over, I went to the bar to get a drink. Buddy stepped up to the bar next to me and asked if I was having a good time. I couldn’t help but explode with amazement over what I had just experienced. I asked him if I would be able to get an autograph and he was more than happy to oblige. “Sure kid, what do you want me to sign?”

At that time, I had been performing magic has a hobby, so I happened to have a deck of cards and a marker in my jacket pocket. I pulled the cards out and asked if he would sign one. As I was handing it to him he asked, “You’re not hustlin’ anybody in my bar with these cards, are you?”

I explained my hobby to him and he said “Card Magic! Well, I’m gonna have to see this for myself. Follow me.” He led my friend and me to his table where all the musicians were hanging out between sets, and announced “This kid thinks he can trick us with some card magic. Let’s see how good he is.” And, just like that, I was no longer a spectator, I was now the performer.

They were thoroughly amazed, and we were invited to spend the rest of the evening sitting at their table while they went back on stage. This would quickly become a night I would never forget. My friend managed to snap a photo of me with Buddy right before he brought me to his table.

Fast forward to my service aboard the USS Valley Forge. My photo with Buddy was proudly displayed on my workbench alongside a growing collection of blues compact discs, one of which was Kenny Wayne Shepherd’s “Ledbetter Heights,” his debut album. On that album was a song called “While We Cry,” a live instrumental solo. It would become the song I played every single night while out to sea right before going to bed. Sometimes, I would put on the headphones and listen while watching the sunset over the ocean. If you’ve never seen a sunset in the ocean, then you’re missing something truly wonderful. Nothing complimented the gold and blue canvas of the sky better than the sound of Kenny’s guitar.

Buddy Guy is the last of his generation of blues guitarists and has been hailed as “the best guitar player alive” by Eric Clapton who was strongly influenced by his Chicago blues. Kenny Wayne Shepherd is the future for blues and has been hailed as “one of the greatest guitarists of all time” by Rolling Stone Magazine. This past Saturday, my camera was privileged to capture these legendary men as they rocked a sold-out crowd at Seneca Allegany Casino in Salamanca. This is my second time attending each of their concerts at the casino and I can assure I’ll be there every time they perform. You’re right, I’ve had the blues from my head down to my shoes, and I’ve had them ever since I wandered into that Chicago Bar.