Skyler Schapp as Tony rehearses a scene for “West Side Story” which will be performed at Jamestown Community College. Photo by Don Hill

From left Gabe Grey as Bernardo, and Austin Schapp as Riff rehearse a scene for “West Side Story.” Photo by Don Hill

Rita Svetanics as Maria, and Skyler Schapp as Tony rehearse a scene for “West Side Story.” Photo by Don Hill 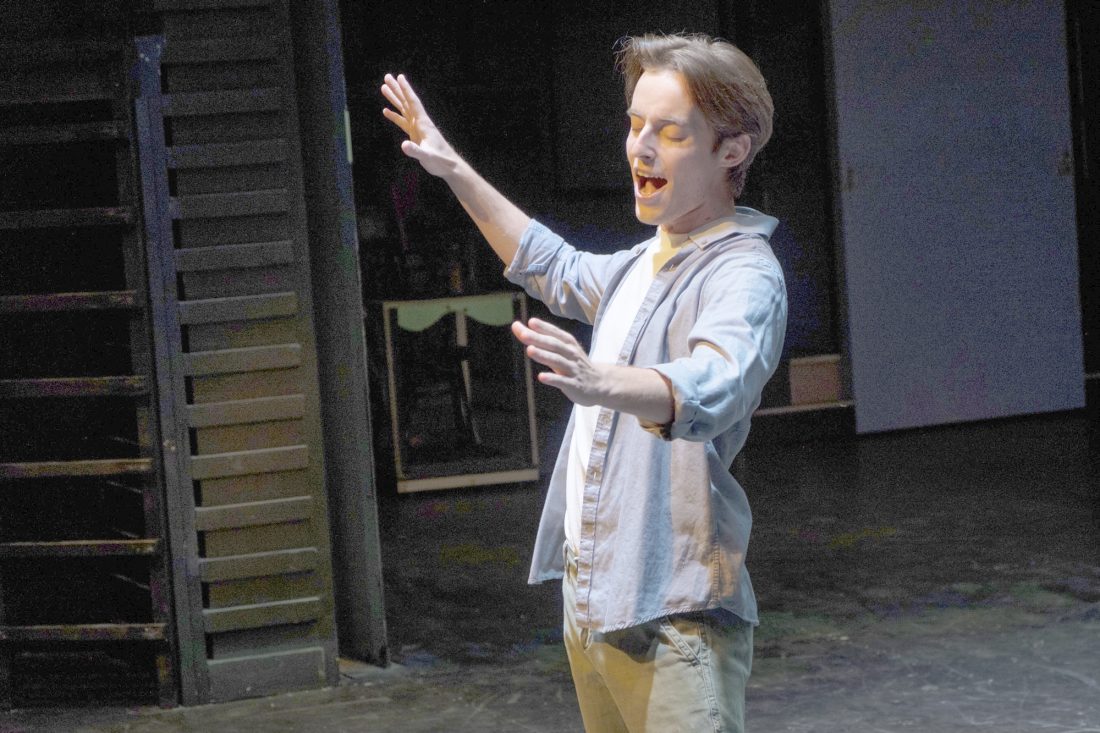 Skyler Schapp as Tony rehearses a scene for “West Side Story” which will be performed at Jamestown Community College. Photo by Don Hill

The orchestra pit had been moved to a new location.

It’s above the audience.

But the change has been embraced by everyone involved with the fall musical “West Side Story.”

At first theatre manager Steve Gustafson wasn’t sure about the location. “As the manager of the theater I get to keep care of that (theater). One of the things we have done is put in (built) a new orchestra pit. It’s sort of a unique challenge because we (Jamestown Community College) don’t have a real pit in the Scharmann Theatre. We’ve had the orchestra in many places — on stage, backstage, and out in the audience. We’ve tried a lot of different things, just trying to find something that’s really going to work,” he said. 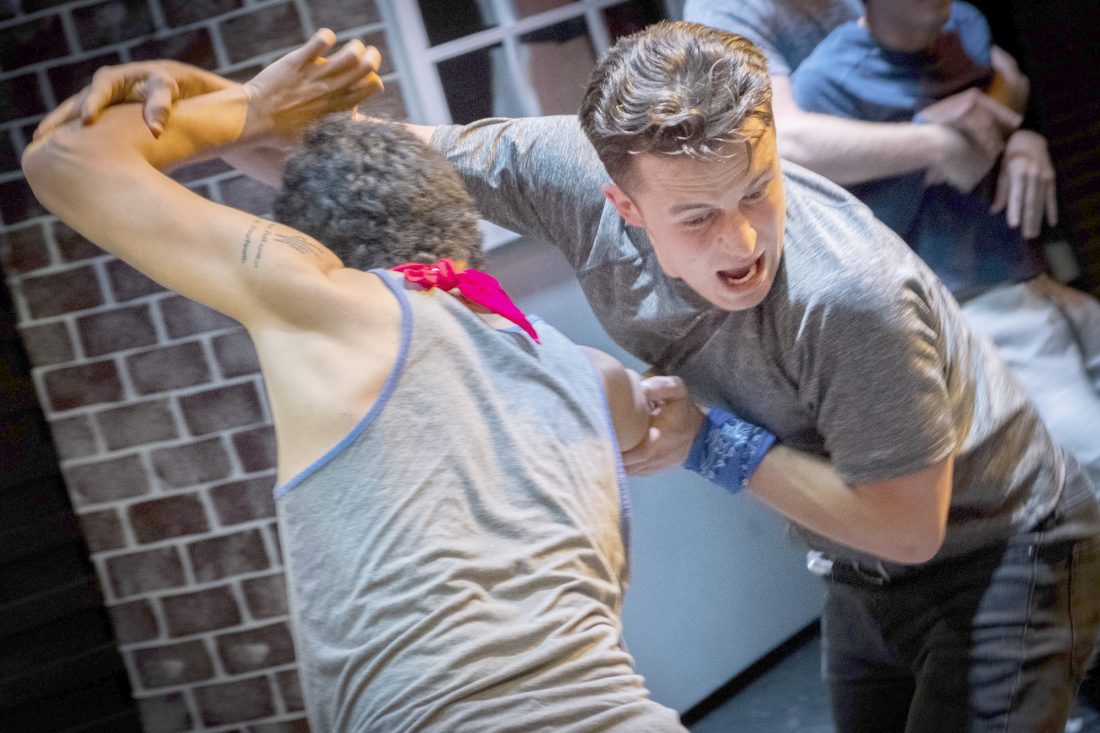 From left Gabe Grey as Bernardo, and Austin Schapp as Riff rehearse a scene for “West Side Story.” Photo by Don Hill

Gustafson said the alcove was being used for storage when he thought he could re-purpose the space. New York State Officials came to JCC and inspected the space and found no asbestos, so soon after that Gustafson received the OK from the JCC Administration.

“They’re (the orchestra members) going to be above the audience, behind the audience in sort of an open room at the back of the theater. They are all going to be using in-ear monitors which is a first for the area. Every orchestra member is going to have his own private monitor mix. There won’t be any monitor wedges (speakers) on the floor making noise. We will soundproof the room a little bit, and it should turn out to be really cool,” he added.

Monitors, he said, are speakers that return music, so musicians can hear what other band members are playing across the room. “It’s going to be a challenge for the orchestra (members), but I think, in the end, they are going to like it because they are all going to have their own headphones, with volume control. We are going to spend a day or two just working on their mixes, so they can all hear just what they want to hear, at the volume they want to hear,” Gustafson added.

Director Julie Constantini also expressed satisfaction with the new pit setup. “I’m super excited for our new pit location. The pit location has always been a challenge in the theatre because there isn’t a pit in front of the stage. Either seats in the audience would have to be moved or the pit would have to be on stage. This will be a nice alternative for future shows in the theatre,” the director said.

The JCC Uncommoners’ production is based on a book by Arthur Laurents and featuring music by Stephen Sondheim and Leonard Bernstein. 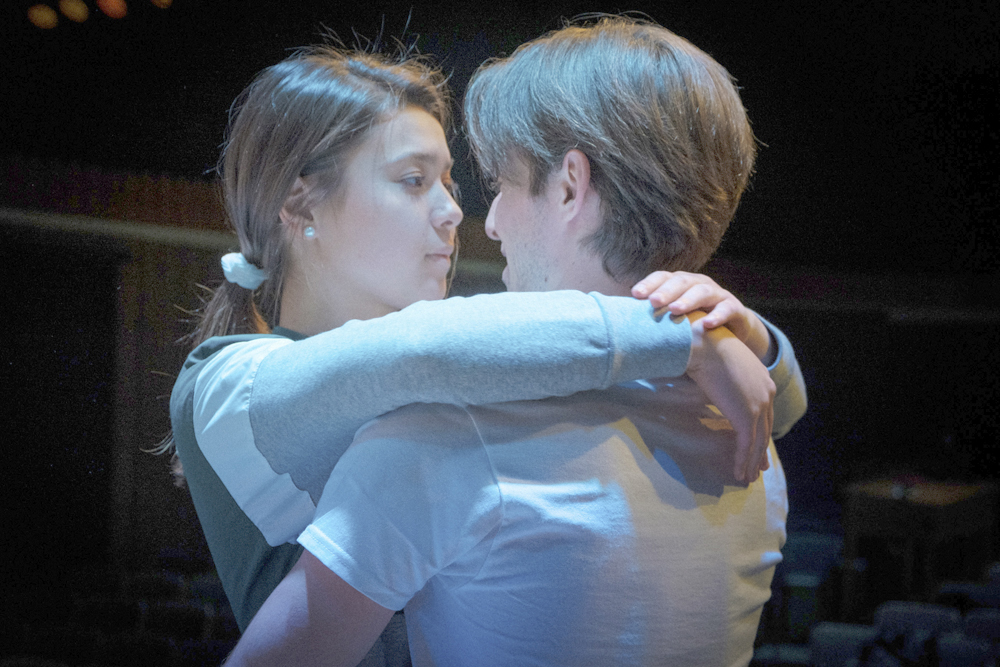 Rita Svetanics as Maria, and Skyler Schapp as Tony rehearse a scene for “West Side Story.” Photo by Don Hill

“West Side Story,” inspired by William Shakespeare’s play Romeo and Juliet, is set in the Upper West Side of New York City in the mid-1950s. The musical focuses on the rivalry between the Jets and the Sharks, teenage street gangs.

The classical musical is a challenge to perform because of the cast is mostly men.

“‘West Side Story’ is a very heavy male dominated cast,” Gustafson said. “It’s Stephen Sondheim and the music is very challenging. We have a terrific choreographer, Jenny Cross, the cast is very excited about it (the show), and they are working really hard on it. Julie Costantini, our director, thought it was time for another big challenge, and something classic.”

“I feel like most people have seen the movie version or at least know a few of the musical numbers so it can be a challenge to keep some of the iconic dance moves mixed with our own take on the show. It’s a show where you really need an entire cast to be strong in singing, dancing, and acting to meet the expectations of what an audience would expect to see,” she said.

Constantini added “West Side Story” was chosen because of the male talent. In 2018, The Uncommoners performed “Newsies” and it featured a male-dominated cast. She wanted to keep the momentum.

“After directing Newsies last year and seeing the male talent, I knew now would be a great time to do a show that called for a similar cast,” she said. “Also, West Side Story hasn’t been done in the Jamestown area for a long time. It’s a challenging show that people are excited to be a part of on stage and in the pit.”

Because of the singing and dancing, “West Side Story” is also one of Constantini’s favorite musicals. “It is the type of show that actors could still recall the dance moves years later because they had to drill them so many times due to the difficulty of the choreography,” she said.

“I love being able to direct this cast and watch their characters develop.”

For Gustafson, the musical is more than just about singing and dancing. “For me, it sort of rings a bell race relations. The story of the Jest vs. the Sharks. Between two groups of people and how they get along. I think it’s a timely thing with the immigration things that are going on. I think people will want to see this,” said.

The main characters are Rita Svetanics as Maria; Marisa Skinner as Anita; Skyler Schapp as Tony; Austin Schapp as Riff; Gabe Grey as Bernardo; and Brandon Milanowski as Action.