‘The Producers’ To Be Performed At Little Theatre 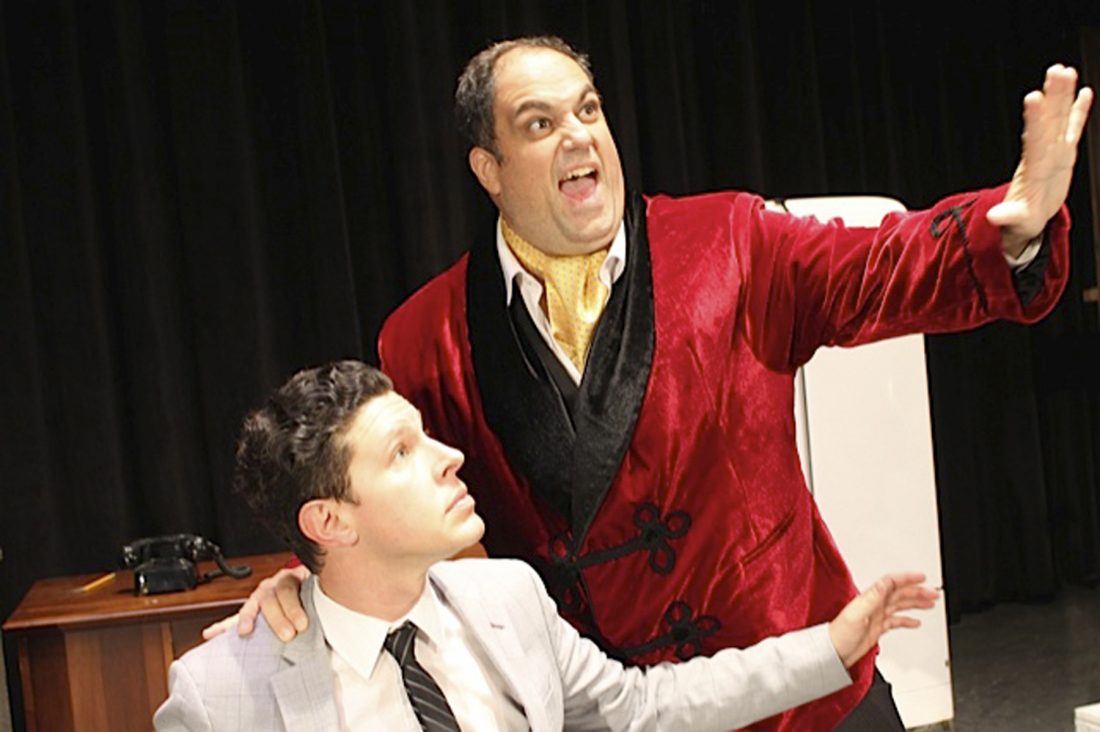 From left Chris Switala as Leo Bloom and Adam Owens as Max Bialystock rehearse a scene in “The Producers.” Submitted photo

“Prepare to be entertained.”

Those words were said by Chris Switala, who plays Leo Bloom in “The Producers.”

Switala loves the role of Bloom, as well as the play.

“I fell in love with the 1967 movie, with Gene Wilder and Zero Mostel, especially the Wilder role of Bloom. I loved the way he created the part.”

Fellow performers Adam Owens (Max Bialystock) and Holly Weston (Ulla Svanson) also love the show and both auditioned for their specific roles. Owens said that both Zero Mostel and Nathan Lane have been heroes to him. “Being able to play Max Bialystock is a joy,” he said. Weston loves musicals, and is enjoying the challenge of both her role as Ulla, and her job as co-choreographer.

Director Todd Pullan added to the admiration for the show. He specifically asked to be able to direct “The Producers” because it has “wonderful music that continues to touch my heart day by day with two of my favorites, “Heil Myself” and “Till Him.” Pullan said that casting the show was easy, with a deep pool of local talent. Besides Switala, Owens, and Weston, Pullan said, “Derek DeVlieger’s rich baritone adds vocal depth as Roger DeBris. I chose to double cast the role of Franz with Andrew Garvey and Peter Larson. Daman Holland is a perfect Carmen Ghia.”

The plot revolves around a down-and-out producer, Bialystock, and his accountant, Bloom. When Leo muses that Max could make more money with a flop than a hit, the play “Springtime for Hitler” is born. With a title like that and the country’s worst director, what could go wrong? The movie version of “The Producers,” written and directed by Mel Brooks, later became a Broadway play with Nathan Lane and Mathew Broderick, and was then again made into a movie with those same actors.

Switala, Owens and Weston all admit to being life-long enthusiasts of all types of theater. Weston especially enjoys musicals and finds this show both a delight and a challenge. Most shows, she says, have just two tap dance numbers but she and co-choreographer Linda Nelson have added two more. “I think the audience will enjoy all the dance numbers,” said Weston. “Even if you’ve seen the play before, we’ve put our own stamp on the choreography.”

Switala enjoys both comedy and drama and says that he looks at the role, rather than the genre, and researches the play and the role carefully before trying out. With “The Producers,” he loves the comedic material, and, for those who have seen him in more serious roles, he says this play gives him a chance to display his funny bone.

All of those interviewed have a history of performing, including Pullan, who remembers performing at age five in a Little Theatre production. Later, he recalled, “I was a cowboy in a sixth-grade program. I forgot part of my solo and made up my own words and choreography. It got a laugh from the audience and I’ve loved performing ever since.”

Weston’s love of theatre started when her grandmother got her interested in Junior Guilders and she continued to enjoy performing in both high school and college.

While all three actors love the show, that doesn’t mean there aren’t challenges. For Weston, it’s the dual role of actor and choreographer. “I have to be able to separate things. Sometimes, I have to forget choreography and just be Ulla. Other times, I need to focus on the dance routines.”

For Switala, he finds those dance routines a challenge. “I’m not a dancer, but, the 1930s MGM-style number is smooth and elegant and the audience will love it.”

Owens finds that the music can be “a bit tricky.” All three agree that the easiest part is working with each other. Said Owens, “we’ve known each other for a long time, so there’s a huge degree of comfort.”

Pullan has had his challenges as well. “As a musician, I’ve been adding my two cents and because of my experience in technical theatre, I work on light and sound designs as well. The schedule has been the biggest challenge, but my production team and the cast has been 1,000% committed, prepared and very willing to strive for excellence with every rehearsal.”

Asked what he hoped to accomplish with “The Producers,” Pullan said, “Theatre is part of my DNA. I love sparking emotion in the audience. Aside from an excellent production, my goal is to honor the gifts of my team and cast, hoping they all feel appreciated and part of the family.”

“Family” is the word Weston, Switala and Owens use, too, when describing working at Little Theatre, saying that everyone is supportive and caring, and, they invite anyone interested in any aspect of theatre to join them as a volunteer. “Even if you only have time to paint one wall of scenery, that’s something,” said Weston. “And, no one should feel that they don’t have the skills. Someone can teach you whatever you don’t know, so whatever your interest, from building a set to operating lights to sewing the costumes, come and volunteer.”

The Cast and Crew