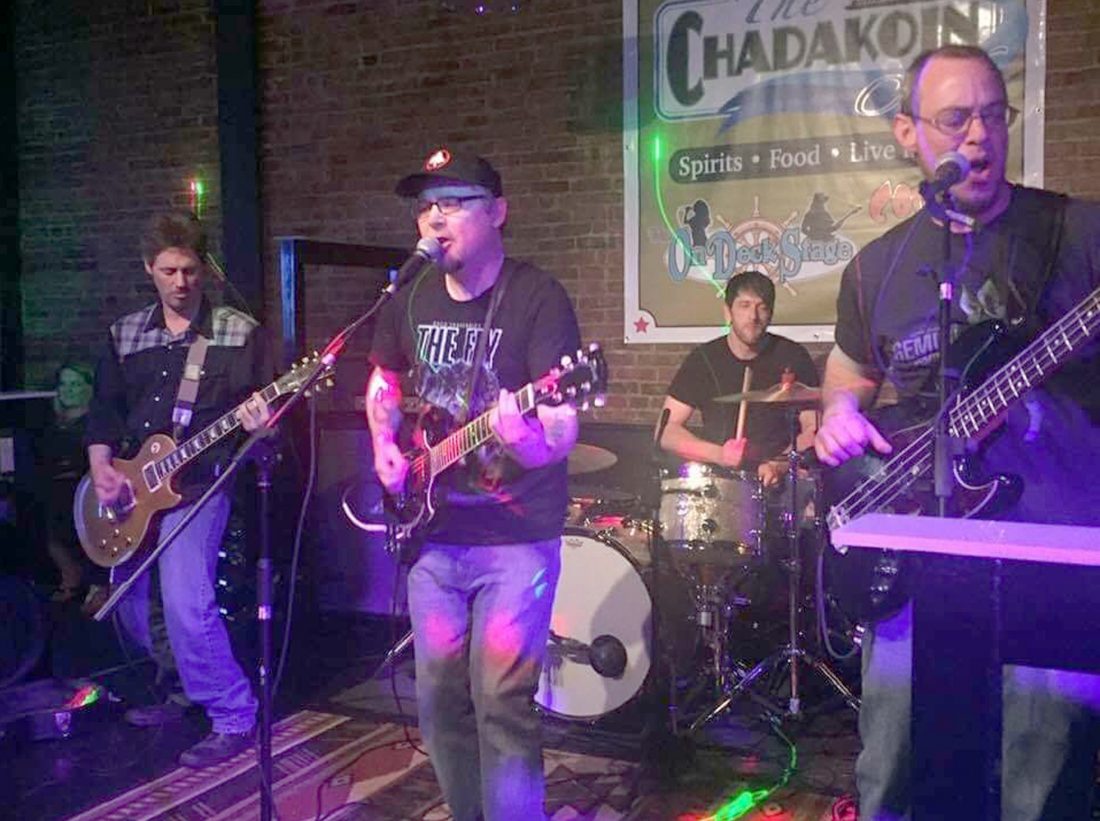 Good ideas tend to linger around a bit. When the time is right, the ideas release their energy, bubble to the top and receive attention.

So, when a local band needed a name, its founder didn’t spend hours trying to come up with a catchy moniker. He already had one.

“It’s actually a name I came up with over 20 years ago for a fictitious 80s metal band,” said guitarist Matt Baxter. “It was kind of the alter ego of my old band Mysterious Moonshow and I just always kept the name around. I never thought that someday I’d make it into a real band, but here we are.”

According to Baxter the four-piece band has been together since the end of 2018.

“We got together when my old band Smackdab came to an end,” Baxter said. “I wanted to do something completely different from that and get back to rock music.” Baxter said he talked with Smackdab drummer Jason Sarro about jamming. From there, Baxter invited bassist Jay Peterson to play. “And then I invited (guitarist) Jamie Trusler, who I’d been in bands with before. Our first practice was during that week between Christmas and New Years, so the very tail end of 2018.”

Baxter said when writing as a band, a song usually starts with a main riff. “We feel it out for a while until we set the tone. Sometimes it takes several hours but we all know when it finally clicks. Then the vocal melody starts seeping in. Our songs tend to be kind of long and go through several ‘phases.’ It’s a process for sure,” Baxter said.

Baxter has written all the words and music so far, but every member has his own input and ideas as well. “I’ll be really insecure about bringing a song to the table, then these guys just bring it to life, and it becomes it’s own thing. It definitely takes all of us to make a song work,” Baxter said.

The guitarist said that many of his ideas for songs come from horror movies Baxter grew up with, in the 80s. He said he is still a fan and still obsessed. “Horror and heavy metal have always gone hand in hand and I’ve always been fascinated by that imagery. It’s just so much fun,” he added. “We tend to go for darker subject matter. There are also bits and pieces of dreams and fantasy, with plenty of personal life experiences mixed in.”

Baxter said the massive crunch (tone) of a Gibson guitar through an old hot tube amp is what attracts him to heavy metal. “It (the crunch tone) can’t be beat. It just feels good and right.”

When writing, Baxter said old school hard rock and heavy metal are his influences. The two genres were the music of his youth. “There’s a magic time period between, say, 1976 and 1983 that just has this spirit that I’m drawn to. The heavy rock of the 70s and the New Wave of British heavy metal.” He is inspired by the music of KISS, Judas Priest, Budgie, and Thin Lizzy. “I just love big loud guitars and smokin’ hot riffs. And I really needed to get back to that,” Baxter said.

Feverhawk has just finished recording an EP entitled “Nocturnal Urge.” It was recorded in the spring at Lost Recording Studio in Jamestown. For more information about “Nocturnal Urge,” visit feverhawk.bandcamp.com.

Baxter said there are not any immediate plans for a regional tour to support the new release because the band is currently building a setlist and playing shows whenever the members can.

“This band was started just for fun but if it turns into something more, then I’m down to take it wherever we can. We shall see,” he said.