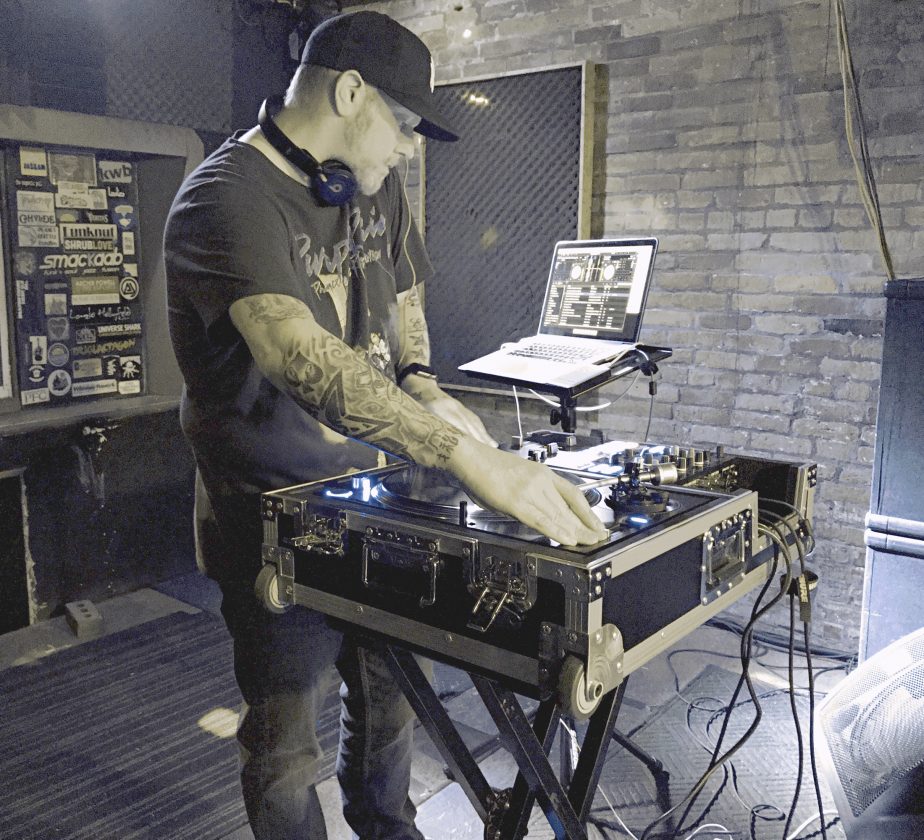 You will see him behind his turntable spinning songs for his audience.

He is just not a disc jockey spinning songs, but he is an artist, creator, producer who cares about music.

He knows the history behind the songs he spins because he grew up listening to those songs and researched the meaning behind them.

He has lived the life of a DJ.

And he continues to live it.

“My goal is to keep everybody dancing all night.”

Jim Blomquist always has been one to learn new techniques and kept up with emerging technology. His ability to go old school while keeping modern is one aspect that sets him apart from others.

A Jamestown native, Blomquist began his DJ career playing at clubs and events throughout Western New York and Northwestern Pennsylvania. From there Blomquist found an interest in the production and recording of Hip-Hop and R&B genres.

In 1998, he was hired as a tour DJ/musical support specialist and worked closely with various Hip-Hop and R&B recording artists from Interscope, Motown, Island/Def Jam, and Sony Records. Until 2002, Blomquist toured the world, performing in such places as Germany, Africa, Jamaica, and the Bahamas, as well as many locations in the US and Canada.

Blomquist will agree that the internet has changed listeners’ tastes. He said the new, young listeners are not involved in the history of the music, and don’t recognize a DJ as an art form. They recognize the DJ as a vehicle in which their songs get played. They are not listening to how a DJ presents music.

“The music itself has played a part of the changes as well because back then (in the 90s), you could have the diversity within the genre.”

In that challenge he was willing to mix different genres and artists. In the mid 90s, when he would perform at a party or club, he would bring 300 to 400 records with him in road cases and set the tone, no pun intended.

“That’s what I worked with. I was the tastemaker. I was getting music early from the labels. I was the one bringing it to them (the audience).” He said people would come up to him at the end of the night and ask him where he got his music. Now he said people will come to him with music he has not heard before.

“That’s completely flipped. I blame the internet for that happening.” He said an artist can go in his room or studio, make a track, put it online on a Tuesday, and by Friday it could be a hit in the club.

That’s not how he got started in the 90s.

He didn’t grab a laptop and find his songs on the Internet. He did the leg work.

“I hopped on a bus, and drove to New York City to buy vinyl, to hear radio stations there. Or somebody that had family here, that would come here, and bring cassettes that they recorded off of the New York stations, and that’s where I would hear my songs.”

The internet also has made working in the arts a little easier from the aspect of getting one’s work noticed, but it’s also made the landscape very competitive and, at times, a bit hostile.

He looks ahead because he said he can use old equipment at any time, but his main goal is to be current. With old equipment he may get a vintage sound, but being up-to-date is what he does.

“I’ve always been on par with things as far as equipment goes. I will be working on something, and I’ll think to myself: ‘You know what would be awesome? If I could do XYZ.’ All of a sudden, there it is. I have to get rid of this and I have to go with that. It’s been this constant cycle. That along with the perception that you have to use Pro Tools to make a pro-sounding audio. I was stuck in that (Pro Tools realm) for a long time. I had to have Pro Tools. You could use any other DAW, but Pro Tools was the industry standard. It took me a long time to shake that.”

At Infinity he teaches “A workshop on live production.” He said the workshop is how to teach artists proper microphone placement and how to be heard on stage.

He also may share his vast knowledge of Hip-Hop.