Iron Maiden Comes Back To Buffalo 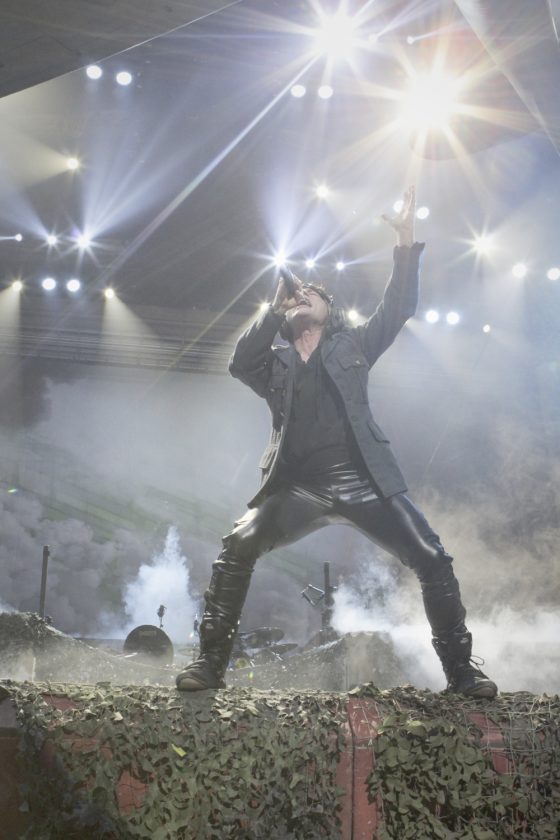 BUFFALO — OK. What can be said about the supposed best heavy metal band in existence taking the stage and showing off a catalogue of 16 tracks, covering over 40 years in a two-hour block?

Start with the 61 year-old voice of Iron Maiden, Bruce Dickinson. The guy has not lost beat, appears to has more energy than men half his age, and has a flair for the dramatic. His theatrics and showmanship may have eclipsed that of nearly every singer on the planet at this point.

Dickinson came out with an aviator’s cap and goggles as a Spitfire soared above the stage and the band said “Hello” to Buffalo with “Aces High.” At several points throughout the show “Scream for me, Buffalo!” bellowed from the frontman. He really never had to ask twice. And the 12,000 people at KeyBank Center responded louder and louder each time.

Some say they would prefer a show to a concert. They would not have been disappointed with Iron Maiden. Each song featured its own stage set and its own costuming from Dickinson. During “The Trooper,” a red-coat Eddie wandered onto the stage with sights set on the band in true Eddie fashion. With expert fencing skill and the help of “Old Glory,” Bruce dispatched the undead giant and went about the show.

Dickinson gave the audience a class in showmanship and storytelling through action. This show was 16 individual acts in the story of the band.

Janick Gers, twirled, spun, and electrified the place with great guitarwork. The same could be said of his fellow guitarists, Adrian Smith and Dave Murray. The three showed that there was a chemistry among them that makes it all work and is a testament to the brotherhood that the band has become of the last four decades.

Iron Maiden founder Steve Harris, was also on his game for the entire show, using the stage as his playground as he laid his iconic riffs on classic all night. Harris has been the biggest constant in the band, keeping the spirit alive as members floated in and out. He gave the fans in Buffalo a great evening of low end that many could only dream of.

Nicko McBrain was hidden by his drums set and set into the altar of a giant church setting that seemed to be the focus of much of the night. The guy was only seen on the giant video screens to each side of the stage for much of the night, until the end when he thanked the audience and offered safe travels at the end of the show.

The emotion was there, and the performance by each musician was simply amazing. It may not be the end of the road for the band, but this show was a testament to just how great these guys perform.

Songs performed were “Aces High,” “Where Eagles Dare,” “2 Minutes to Midnight,” “The Clansman,” “The Trooper,” “Revelations,” “For the Greater Good of God,” “TheWicker Man,” “Sign of the Cross,” “Flight of Icarus,” “Fear of the Dark,” “Number of the Beast,” and “Iron Maiden.” For an encore songs performed were “Evil That Men Do,” “Hallowed Be Thy Name,” and “Run to the Hills.”

NORTH TONAWANDA — Ted Nugent has been performing in front of crowds for 65 of his 71 years.

From the show-opening first note of “Stranglehold” to the final chord of Nugent’s rendition of “The Star-Spangled Banner,” Nugent was a ball of energy.

Playing a series of guitars, mostly a vintage Gibson Byrdland guitar, he and his bandmates filled the historic theater with good old rock music. And he played it loud at The Riviera Theater.

With most performers that have been around as long as Nugent, there was a wide variety of ages and demographics at the sold-out show. The thing is, how many artists can you see people in their upper ages playing air drums in the front row of the show, loving the high volume and the chance to see a legend in such an intimate setting.

The night was not all song after song. Nugent, is a rather outspoken in his conservative political stance and his love of all things hunting, be it bow or firearms. Nugent criticisized New York State Gov. Cuomo and kept calling Upstate New York the real New York, to the approval of those in attendance.

If you like great hard rock guitarwork, this was a show to be at as his 14-song set lasted about 90 minutes. He performed his hits, “Stranglehold,” “Cat Scratch Fever,” “Fred Bear,” “Free For All,” and closed the night with “Great White Buffalo” with the national anthem to close the evening.