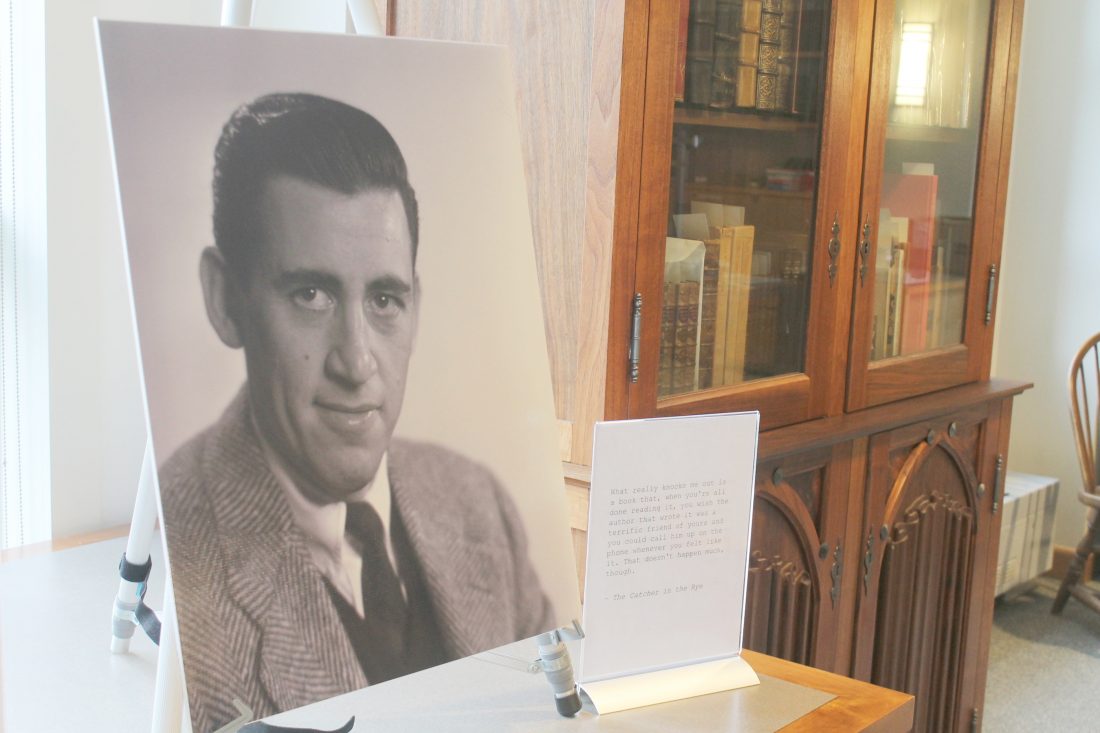 FILE - In a Tuesday, Jan. 22, 2019 file photo, a previously unseen photo of author J.D. Salinger is displayed at the University of New Hampshire in Durham, N.H. ÔThe Catcher in the RyeÕ author is going digital The late J.D. Salinger is giving in to the digital revolution. Longtime Salinger publisher Little, Brown and Company says itÕs the first time that the entirety of SalingerÕs published work, including ÒThe Catcher and the Rye,Ó will be available as e-books. The electronic publication is happening Tuesday, August 13, 2019. (AP Photo/Holly Ramer, File)

He traded in his typewriter for a computer, and word processing program.

Not really, but the books of the late recluse author J.D. Salinger have gone digital.

According to The Associated Press, Salinger’s publisher Little, Brown and Company said all four of his works, including “The Catcher in the Rye,” were scheduled to be made available as e-books Tuesday. It marks the first time that the entirety of his published work will be available in digital format.

“The Catcher in The Rye” is read by many high school students in their junior or senior years as they try to relate their lives to the life of the main character Holden Caulfield. The novel has become a mainstay as a story about teenage angst and rebellion.

His son, Matt Salinger, said to The AP, the digital holdout ended because many readers use e-books exclusively and some people with disabilities can only use them.

“There were few things my father loved more than the full tactile experience of reading a printed book, but he may have loved his readers more — and not just the ‘ideal private reader’ he wrote about, but all his readers,” Salinger’s son said. Matt Salinger helps oversee his father’s literary estate.

Even as publishers and consumers adopted e-books and digital audio, Salinger’s books remained defiantly offline, a consequence of the writer’s distaste for computers and technology. And while Salinger kept writing until his death nearly 10 years ago, not a word has been published since 1965, according to a New York Times article by Alexandra Alter.

Salinger did not grant press interviews and mainly stayed out of the public’s eye. The author didn’t want attention, nor did he seek it.

In January, The AP reported that The University of New Hampshire was celebrating Salinger’s centennial year with an exhibit he likely would have not liked. It was a display of previously unseen photos of the famous reclusive author. Salinger, who was born Jan. 1, 1919, and died in 2010, spent the last nearly six decades of his life far from the public eye in Cornish, New Hampshire. The photos unveiled in January, The AP said, were taken by famed German photographer Lotte Jacobi for the book jacket of Salinger’s 1951 novel “Catcher in the Rye,” but he requested the picture be removed from the book after the first printing so he wouldn’t be recognized.

In addition to “The Catcher in the Rye,” the e-books include “Nine Stories,” “Franny and Zooey,” and “Raise High the Roof Beam, Carpenters and Seymour: An Introduction,” The AP noted. The electronic publication continues a yearlong centennial celebration of author’s birth and his contributions to literature. He not only stopped releasing new work, but rejected any reissues or e-book editions.

But things are changing, The AP said. In addition to the e-books, there have been new covers and a boxed edition, and Salinger’s son also has said unpublished work by his late father will be coming out. But he said any publication of new works may be years away.

For book enthusiasts, and readers this is great news. Now one is not confined to reading Salinger in book format, but one can read Salinger on one’s phone, computer or electronic tablet.