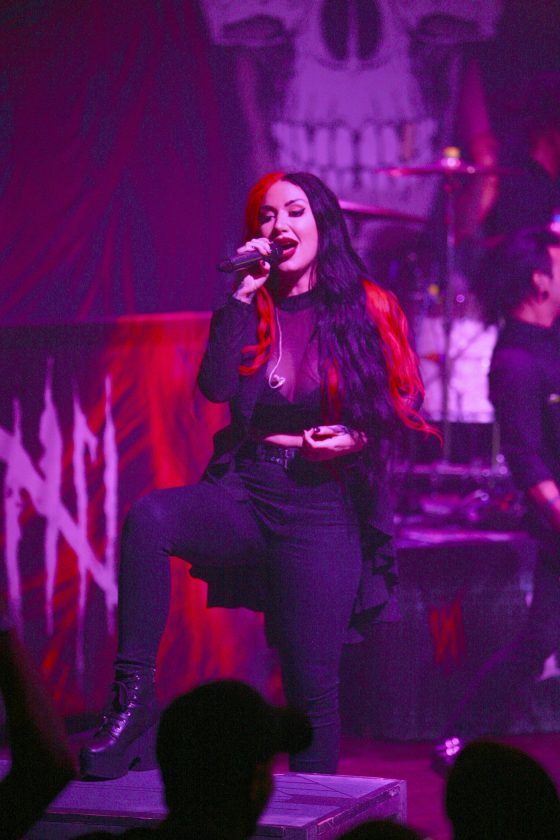 Ash Costello, vocalist for New Years Day sings to the audience at The Town Ballroom in Buffalo. Photo by Chris Chapman

BUFFALO — Metal, metal fans, and metal musicians are a rather particular group. We are a club that many people don’t understand. And we kind of like it that way. The family atmosphere of the Town Ballroom in Buffalo on July 6 was a great example of that. Not only did the night’s headliners, New Years Day, offer the feeling of old friends reunited, but the two openers, Rivals, and Savage After Midnight, did as well.

Maybe it was the heat of summer that kept the crowd small. Maybe it was the busy summer schedules. Either way, there was space for many more. Those that missed the show missed a great one, with some solid messages.

Metal is not thought of as a means to convey positive vibes, solid stories in the songs about how we can all pick up our heads and move on. Ash Costello, vocalist for New Years Day, and Kalie Wolfe, Rivals vocalist, brought out the emotion is each song. They interacted with the audience to the point of creating that sense of being a family. Their bandmates offered the same level of celebration of music and of each other as well. Several members of New Years Day were able to make their way into the small crowd and play, even shooting selfies with some seriously dedicated fans.

The night’s opener, Savage After Midnight, offered a great mix of pop-metal mixed with some great disc jockey and sound mixing.

Throughout the night, it was clear to see that Ash has an affinity for the stage and for her fans. The room felt intimate. It seemed to allow her to take some liberty and interact with fans at various points throughout the night. Her stage presence and her performance is proof-positive that she is not just a singer in a metal band, she is an entertainer. She knows how to work the crowd to get the most energy and will not let it drop. Ash even has the presence and confidence to hold the show up until she gets what she wants.