In Review: A Stately Visit —Avatar Performs In Buffalo 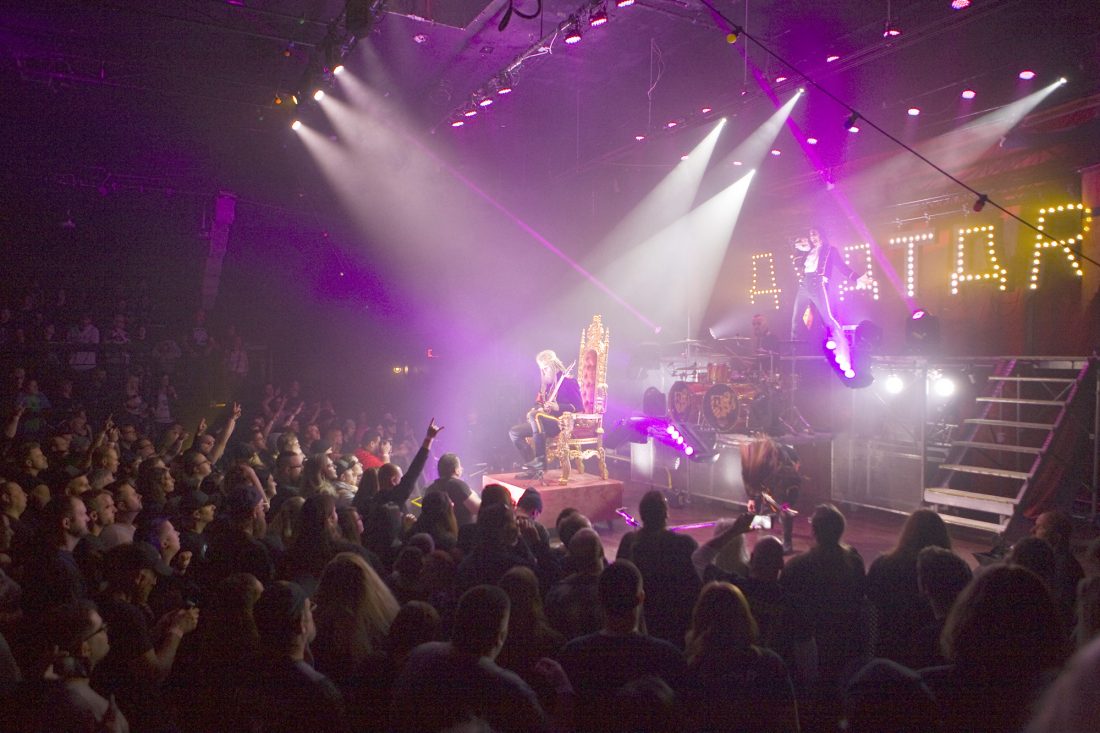 Avatar performing at The Town Ballroom in Buffalo. Photo by Chris Chapman

BUFFALO — The night of music Avatar happened to headline at The Town Ballroom was definitely a happening.

From setting foot in the venue, it was apparent that the night was going to be a special one; not just for metal fans but for fans of music and theatrics, and fun. The front of the entry was adorned to look as though the Avatar merchandise was a part of an old-time carnival, complete with a barker attracting people to spin the “Wheel of Death” for prizes. It was a great way to start the evening.

If you listened carefully to the music being played as fans filed into the Ballroom, it gave off the carnival vibe. The perfect way to kick off a tour of four bands that are only loosely connected.

The night started with Atlanta, Georgia’s own ’68, a noise punk duo that simply set the tone right off the bat. Guitarist and vocalist Josh Scogin and drummer Nikko Yamada demonstrated that, even in the world of noise punk, a duo like theirs have to be masters of their art. Scogin was having fun interacting with the crowd and Yamada looked to be channeling all his anger on his drum kit. To end the set, Scogin had his guitar part on a loop, resetting it as he walked past the pedal while he started the teardown phase of the band switchover.

The Orange County, Calif. duo, Dance with the Dead played a set of what one would imagine would be a metal-fashioned rave style of music. A simple setup, two guys, two guitars, a disc jockey table, a synthesizer table, and a 55-gallon drum spewing fog with a giant skull elevated above it. The music these two created can only be described as a continuance of the energy-building that started with the show openers.

Next was the act that many came to the show for and not quite expecting what they were about to see. Known for his progressive rock and metal sound with a full band and all kinds of crazy ideas, Devin Townsend played an amazing acoustic set nearly alone. He shared the stage with a rather silent, motionless stuffed sloth on the front of his rig.

Townsend performed some of the most hauntingly beautiful pieces that could come from an acoustic guitar and his uniquely toned, and versatile voice. He wove the actual songs into the blend with what felt like streams of consciousness coming from him and his guitar. He drew from the audience as well as his stories of a quite lengthy career.

What a visual. It is all about the happening, the experience, and the show proved to be as visually stunning as it was aurally.

From the carnival lights and bubble machines to the throne and its raising platform, the band was spot on for the first night of the Avatar Country tour. The crowd was having fun and the response form the stage had just as much energy. Songs like “Bloody Angel,” “Let it Burn,” “Paint Me Red,” and “Hail to the Apocalypse” were energy feeding points for fans and band alike.

As Johannes Eckerstrom, lead singer and guitarist, introduced one of the first hits the band had in the United States, he brought it all together. He told the crowd that the guys on the stage are really not much different than the people there to hear it all. He said they are all the ones that have been labeled by others in society as being freaks.

“You know, those that want to point their fingers and call us names, laugh at us, they make the mistake of not getting close enough to see what it is that brings us all together,” he said.

With that, he went into a song that seems to hold many in the metal community together, “Smells Like a Freakshow.”