The Mayville Fourth of July Celebration and Parade was held Thursday. Local emergency services and other organizations walked in the parade. Leading the parade was the Chautauqua County Starflight helicopter that flew just above the tree line for viewers to observe, kicking off the beginning of festivities. Celebrations were also held in Findley Lake, Lakewood and Dunkirk. P-J photos by Jordan Patterson 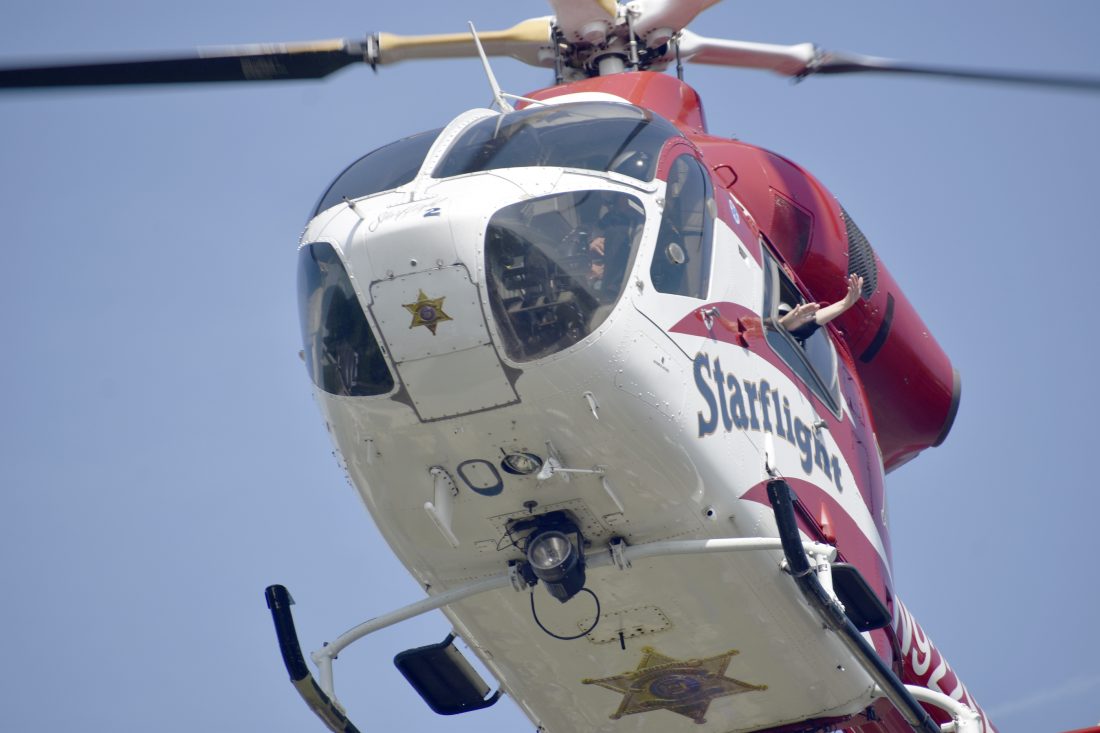 The Mayville Fourth of July Celebration and Parade was held Thursday. Local emergency services and other organizations walked in the parade. Leading the parade was the Chautauqua County Starflight helicopter that flew just above the tree line for viewers to observe, kicking off the beginning of festivities. Celebrations were also held in Findley Lake, Lakewood and Dunkirk. P-J photos by Jordan Patterson

MAYVILLE — There are various ways to show American spirit. On the Fourth of July, simply showing up, typically dressed in red, white and blue, is the most common method.

Two hundred years after 13 colonies declared independence, the efforts of the U.S. founding fathers are still recognized on the federal holiday by honoring Independence Day. In Mayville, the annual parade embodied that recognition.

Erie Street was lined with emergency service vehicles and trailers with displays on them. Candy was thrown out of windows as children rushed into the road to get their pick.

The parade was followed by activities, events, food and live music at Lakeside Park. At 10 p.m., a huge fireworks display and the annual tradition of flares around the lake were shown.

Sitting on a porch on Erie Street shortly before the parade began, John Savage, a Pittsburgh, Pa., native, was playing a guitar that was connected to an amplifier. Although not overbearingly loud, Savage was playing songs for himself, his friends and anyone who walked by during the parade. Why? 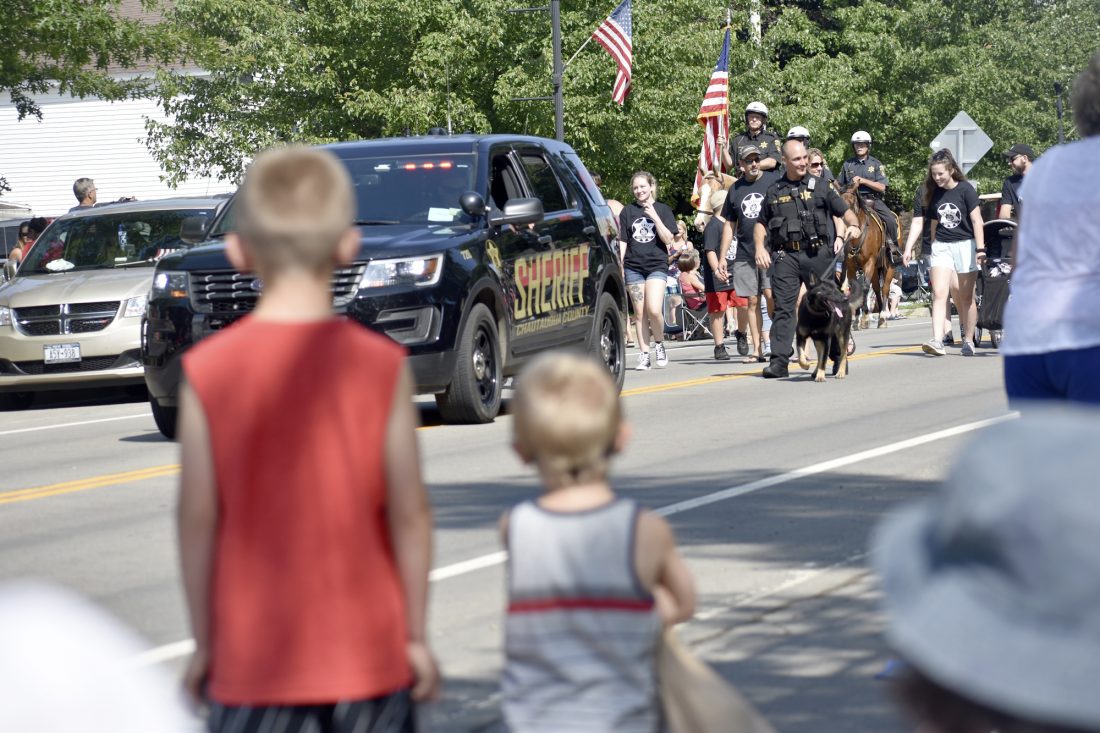 He just likes to play. But also, it was one of his methods of showing his patriotism and “because it’s the Fourth of July and I’m in the spirit.”

“I’ve been playing some traditional songs,” he said just before 10 a.m. on Thursday.

Savage was playing songs like “Yankee Doodle Dandy,” “The Army Goes Rolling Along” and “You’re A Grand Old Flag.”

Savage has been playing guitar since the age of nine and thought it was a natural way for him to show his patriotism.

For him, while people alive today are so far removed from the actual Independence Day, he said they can at least get into the “spirit” of what the holiday symbolizes.

“We weren’t there, but we understand the spirit behind it — the spirit of independence, fighting for our country and being Americans,” he said.

Savage and his family have been visiting Chautauqua County for 25 years because they “love it up here.” Since that time, he has watched many of the Mayville parades on Independence Day.

Strumming his guitar Thursday, Savage said the day was also about supporting the troops and honoring their sacrifices.

Just up the road, Jeremy Evans, of Dewittville, was waiting for the parade to start as well. He wouldn’t be able to catch all of the parade as his shift for work began at 10 a.m. Evans, an employee at Chautauqua Wine and Liquor, said business usually increases around July Fourth to accommodate for the holiday’s corresponding celebrations.

But Evans didn’t mind working on the patriotic holiday.

He admired the holiday and what it stands for. For him, it’s about being prideful, free and an American.

“Everyone has their own separate way of celebrating,” Evans said. “For me, personally, I enjoy setting off fireworks and all that… just being happy. That’s the American way, to just smile.”

Supporting the troops was also an aspect of the holiday he was vocal about and was adamant that U.S. citizens can never forget the ones who gave their lives for freedom.

“That’s the biggest thing,” he said.

After his shift, Evans wasn’t sure what he would be doing to celebrate, but his plans were wide open and he was free to whatever he chose.

Several miles south, the patriotic spirit Savage spoke about was also on display. In the village of Lakewood, the annual Independence Day Celebration was held.

There, The Post-Journal spoke to Diane Adams, of Ellicott, who was walking on Chautauqua Avenue.

Adams believes she is “kind of” patriotic. She has American flags posted outside of her home, among other patriotic characterstics. For Adams, the yearly reminder of how the country became free was a positive.

“I think it’s a good idea to keep it in mind as we age,” Adams said of remembering the holiday. “People in our family that were in wars … people just carry it from one generation to another.”

Lakewood annually hosts the celebration sporting food stands and arts and crafts vendors. After the festivities, Adams planned to meet her friends for lunch.

Adams, who visits the Lakewood celebration almost every year, said people like to come to be patriotic, shop and be together.