Eagles Close In On Title 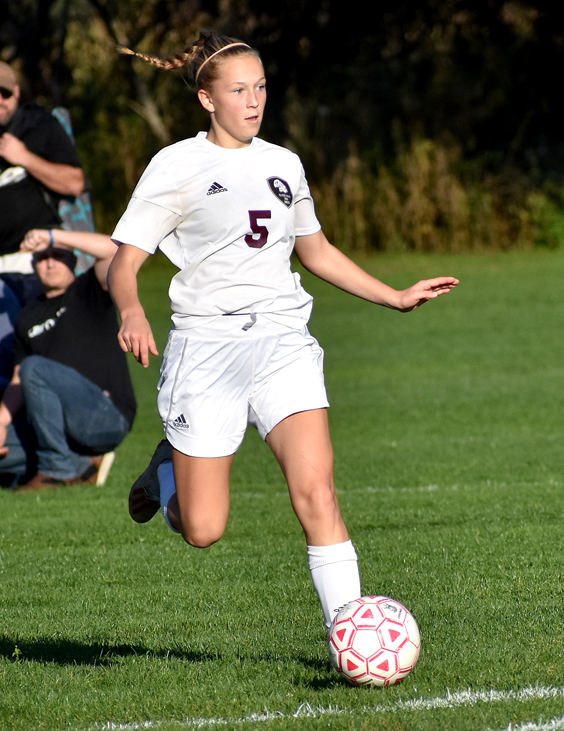 RANDOLPH — Entering the season, Ellicottville and Portville figured to battle it out for the Chautauqua-Cattaraugus Athletic Association East Division title.

With two games remaining in the league season, the Eagles are doing all they can to win the championship outright.

On Tuesday, they moved one game closer to their goal with a 4-1 victory over Randolph at Weeden Park.

“This is essentially the same team back as last year when we lost to Holland in overtime,” Ellicottville head coach Tammy Eddy said about a 2018 Section VI Class C playoff loss to the Lady Dutchmen.

Mandy Hurlburt, Hayly Fredrickson, Jocelynn Wyatt and Logan Fredrickson scored for Ellicottville, which improved to 7-2-3 overall, including 6-0-2 in the league. The Eagles are a half-game ahead of Portville in the league standings with games against Salamanca and Franklinville remaining. 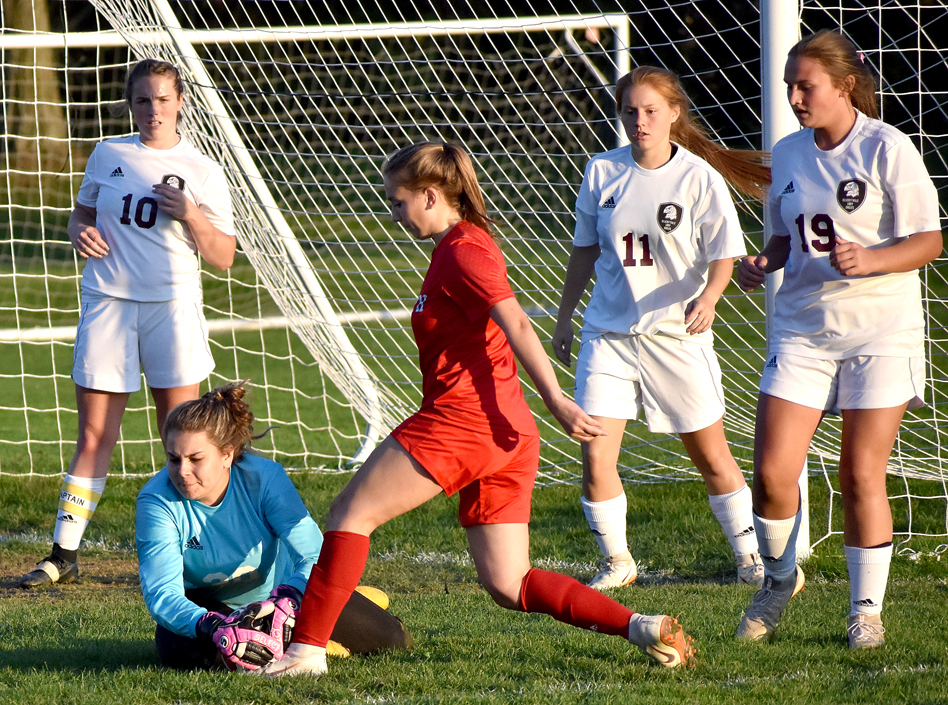 Ellicottville goalkeeper Brooke Eddy falls on a loose ball before Randolph’s Caliana Wheeler is able to get a foot on it during Tuesday’s CCAA East Division game at Weeden Park. Looking on are Eagles Kaitlyn McGuire (10), Megan Stuve (11) and Harley Ficek (19). P-J photo by Matt Spielman

Tyra Clark spoiled the shutout in the 73rd minute for the Cardinals, who fell to 3-9-1 overall and 3-4-1 in the league.

“Despite our record, from the start of the season we’ve made huge improvements within the team, working as a team and moving the ball, just connecting passes. Unfortunately, our record doesn’t reflect that,” Randolph head coach Alexa Troutman said. ” … It’s hard to get down against a team like Ellicottville. We had some great opportunities, we just couldn’t put the ball in the back of the net.”

Ellicottville got on the board in the eighth minute Tuesday as Hurlburt took a pass from Camryn Earley and sprinted past the Randolph defense before finding the back of the net for her team-leading 10th goal of the season.

Randolph actually controlled large portions of the opening 40 minutes, with Clark shooting over the net on a breakaway in the 17th minute before tapping a free kick just wide in the 21st minute. 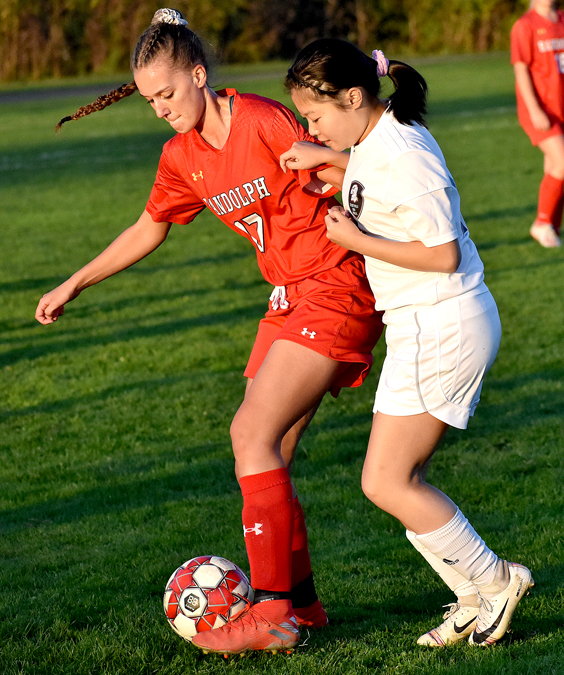 The Eagles then got a little bit lucky with just 11 seconds remaining in the first half. A Randolph clearing attempt was deflected by Hayly Fredrickson and shot high in the air toward the Cardinals’ net. With plenty of English on the ball, it bounced in front of the Randolph goal and over the head of the Cardinals’ keeper into the goal to make it 2-0.

“That one kind of hurt. It took momentum away a little bit,” Troutman said. “Going into halftime 1-0 instead of 2-0 is a big difference.”

After the break, Wyatt worked a perfect give-and-go with Hurlburt in the 44th minute, finding the back of the net for her third goal of the season and a 3-0 lead.

“It was awesome. The fact that they are passing like that is exactly what I want to see,” Eddy said. “When we first started the season, I said there should be multiple girls scoring goals in every game, that way when we go to playoffs they can’t just mark No. 5 (Hurlburt). … They are definitely working on that and it’s awesome.”

Again, the Cardinals pushed back with a soft header on net off a free kick in the 47th minute before Clark missed wide on another two chances in the 52nd and 59th minutes.

“She never let up,” Troutman said of Clark. “She kept her head in the game the whole game. I was proud of her.”

In the 64th minute, Logan Fredrickson took a pass from Evelyn Nuzzo and broke in alone on Miranda Waterman, shooting off the goalkeeper’s hands into the net for a 4-0 lead.

Finally, in the 73rd minute, Clark got Randolph on the board when she picked up a long ball and dribbled past hard-challenging goalkeeper Brooke Eddy before finishing with her left foot to make it 4-1.

“I’ve been telling them all season, it’s the team playing their best at the end of the season. We are playing our best soccer right now. … Despite the score, despite our record, we’re playing good soccer,” Troutman said. “We can be right there with any team. It’s going to take a lot of work … but we have the potential to be right there with some good teams.”