On The Right Foot 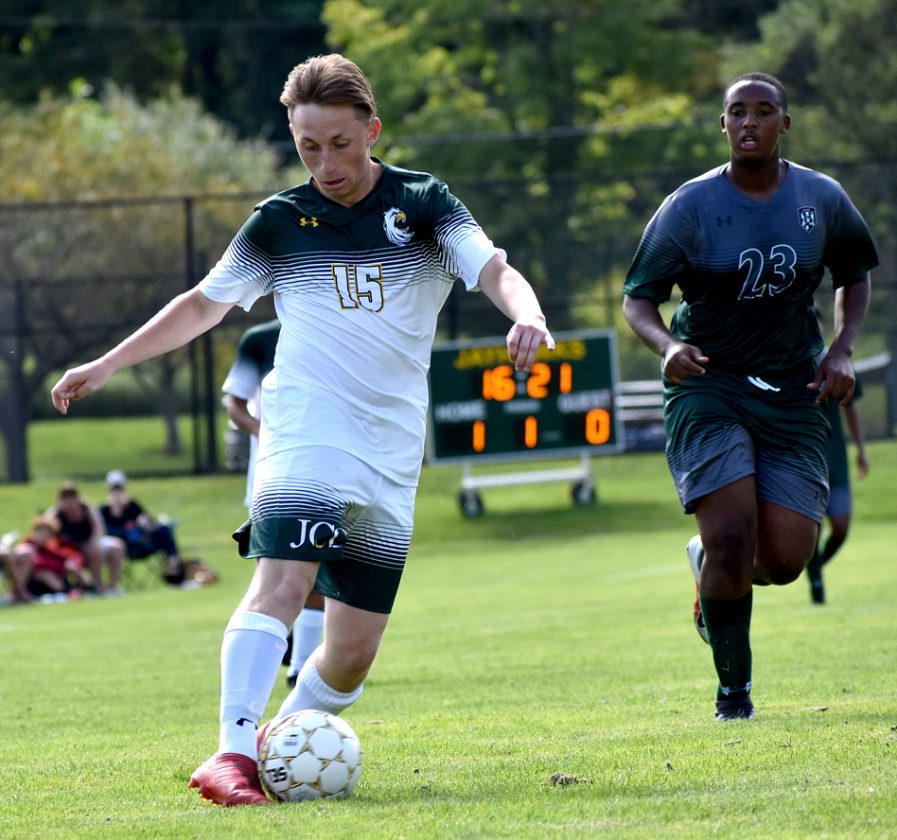 It takes more than 30 hours to fly from Western Australia to Jamestown.

For Harry Ward, it took him a little more than 10 minutes to settle in with the Jamestown Community College men’s soccer team.

Ward, a freshman from Guildford Grammar School in Kalamunda, scored a pair of goals, one in each half, to lead the Jayhawks to a 4-1 season-opening victory over North Country CC in NJCAA Region 3 Division III action Saturday afternoon at the Physical Education Complex.

Ryan Koch, a freshman from Long Bay College in Auckland, New Zealand, added the other two goals for Jamestown CC, which hopes to capitalize on a large international contingent on its 28-man roster this fall. Luuk Willemsen, a freshman from the Netherlands, had a pair of assists in the contest.

“(Harry) was really good. The kid we replaced him with, Ryan … he’s not as big, but he’s a big body,” Jamestown CC head coach Pat Anderson said. “He’s got a cannon for a foot. He was able to capitalize on a couple of plays. Out of that position, we did great today.” 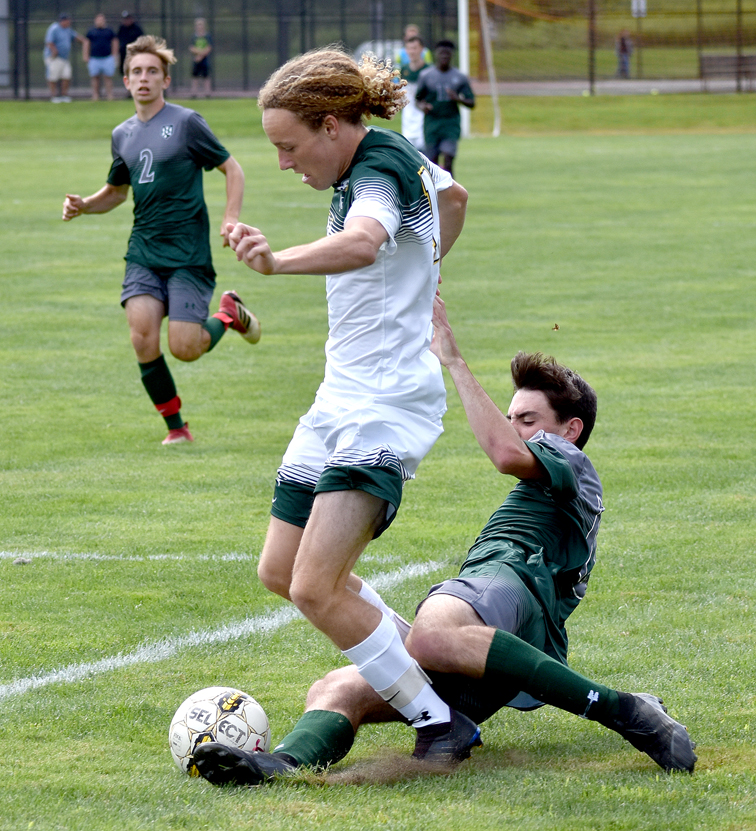 Jakob Moore, the Jayhawks’ sophomore keeper, was beaten just once on a perfectly placed free kick midway through the second half, but he came up huge just minutes later with a pair of stops in close to keep Jamestown CC ahead by a pair of goals.

“There were probably four great shots today, and he stopped three of them,” Anderson said. “That’s a lot more than you would normally expect from a goalie.”

It was a near-complete effort from the Jayhawks, who controlled possession for most of the afternoon, except for the five- to 10-minute stretch during which Moore bailed out his teammates.

“I was pretty pleased. We managed to get some good offensive attack. We played the ball through pretty well,” Anderson said. “We showed composure for the most part. I told these guys they have some talent and they have the ability to be good. It’s going to be a matter of getting it consistently.”

Ward found the range first when a Jayhawks’ crossing pass in the box was blocked. The ball landed on the foot of Ward, who made no doubt about it with his first collegiate tally. 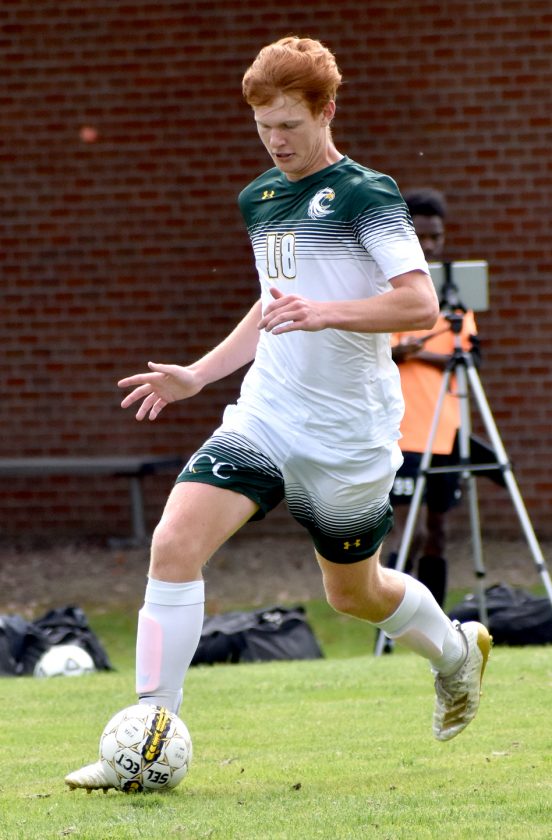 Above, the Jayhawks’ Harry Ward possesses the ball.

Just over midway through the opening 45 minutes, Anderson substituted several of his reserves for the starters, and the second shift capitalized as Koch scored his first of the season to give the hosts a 2-0 lead.

“You’ve got some really special players here,” said Moore, one of the Jayhawks’ captains. “You can take Harry off and throw Ryan on and know he’ll do the job in a slightly different way, but still at a high enough level.”

Jamestown CC controlled the midfield area and the only real chances Anderson’s team gave up were on set pieces, but more often than not, Moore was able to rise up and secure multiple free balls in the box.

“We figured out how they were trying to attack,” Anderson said. “We played it pretty well.”

“It’s nice to have a couple of center-backs … if one of them sits a little bit high,” Moore added, “you have confidence the other one can turn around and rip back as quick as any of the center-backs in this league.”

Ward struck again in the second half to make it 3-0 and essentially put the game away.

“Something special that he does is he really knows how to use his body,” Moore said of Ward. “He can have a big center-back behind him and still bring the ball down and work off of that. Last year, we didn’t really have somebody who was confident enough to hold on to that ball and do something with it.”

The Saints got on the board midway through the half when the Jayhawks were called for a foul just outside the 18-yard box. Denilson Reyes sent a perfectly placed shot over the Jamestown CC wall and into the top corner of the goal just past the diving attempt from Moore.

Within the next 10 minutes, North Country CC was able to pressure inside the 18-yard box again, but Moore turned away an initial shot and a rebound from in close to keep the two-goal lead.

“Huge saves,” Anderson said. “The fact is that we know we are going to get them from him.”

With time winding down, Koch scored his second of the game to give the Jayhawks their three-goal lead back.

“It was definitely very promising,” Moore said. “For a pretty large percentage of the game we definitely played the way that we want to play. We showed we are capable of doing something special this year.”

Jamestown CC’s newly created depth will be tested today when it hosts Clinton CC at 11 a.m. back at the Physical Education Complex. The Cougars lost at Genesee CC 10-1 on Saturday.

“We didn’t play anybody over 50 minutes,” Anderson said. “Hopefully we’ll be excited to play and give them our best shot.”