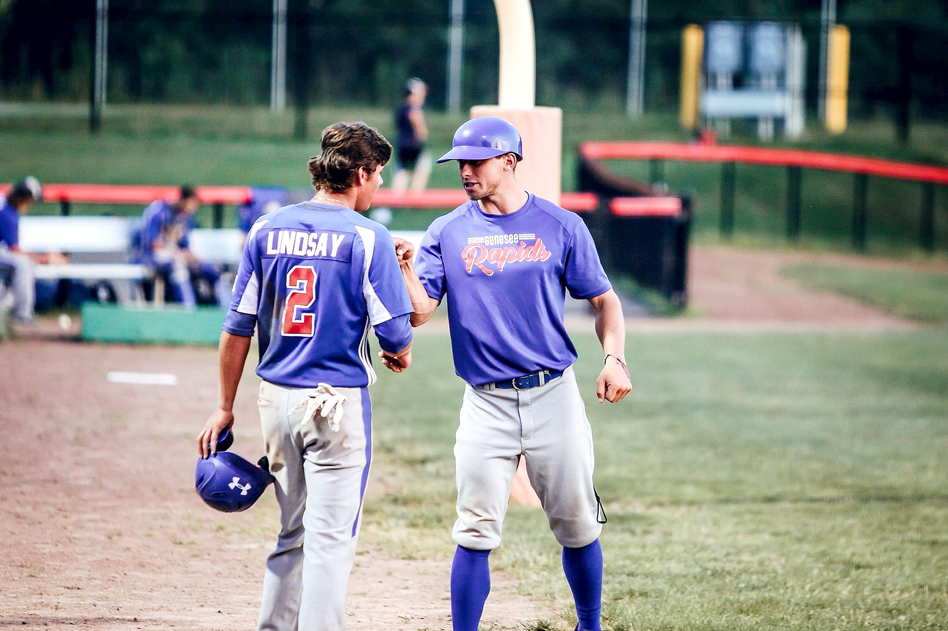 Frewsburg graduate Thad Johnson, pictured above right, managed the Genesee Rapids of the NYCBL this summer. Johnson will now be an assistant coach at Yuba College in California. The 49ers play at Bryant Field, pictured second. Submitted photos

After spending two seasons as an assistant coach at Menlo College in Atherton, California, Thad Johnson is relocating in The Golden State.

Johnson, a 2012 Frewsburg graduate who managed the Genesee Rapids in the New York Collegiate Baseball League this summer, has agreed to an assistant coach position at Yuba College in Marysville, California for the coming school year.

“I wanted to get into junior college, especially in California,” Johnson said last Wednesday evening, a few days after completing a four-day cross-country drive with stops in Chicago; Boulder, Colorado; and Salt Lake City. “It’s really a hotbed of talent in a pretty good area.”

Yuba College is the main campus of the Yuba Community College District, which had a total enrollment of 6,804. Menlo was much smaller, with a reported undergraduate of under 1,000 students.

The 49ers are now led by first-year head coach Jason Hampton of Rocklin, California, who spent the past two years as the team’s pitching coach and recruiting coordinator. 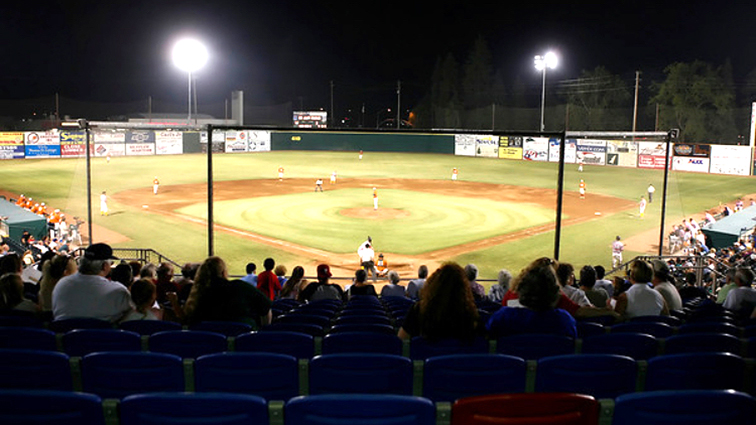 “We talked about vision,” said Johnson, who met Hampton face to face for the first time Wednesday. “He’s a younger guy and we really feel like we can make a name for ourselves and this school.”

Prior to coaching at Yuba, Hampton spent two years coaching at the NCAA Division II level in South Dakota and Minnesota.

“I applied for the volunteer assistant job, but (Hampton) called me and talked to me about the paid position,” Johnson said. “It checked all the boxes for what I wanted to do. Menlo was good, but I couldn’t really move up at all.”

Yuba plays in the Bay Valley Conference of the California Community College Baseball Coaches Association and went 17-21 last season, including 9-12 in the conference.

“A couple of assistants in our conference recommended me for the position,” Johnson said. (Hampton’s) a pitching guy and needs somebody to run the offense and the recruiting. That was something I was looking for. We want to get a name for developing guys and sending them to the next level.” 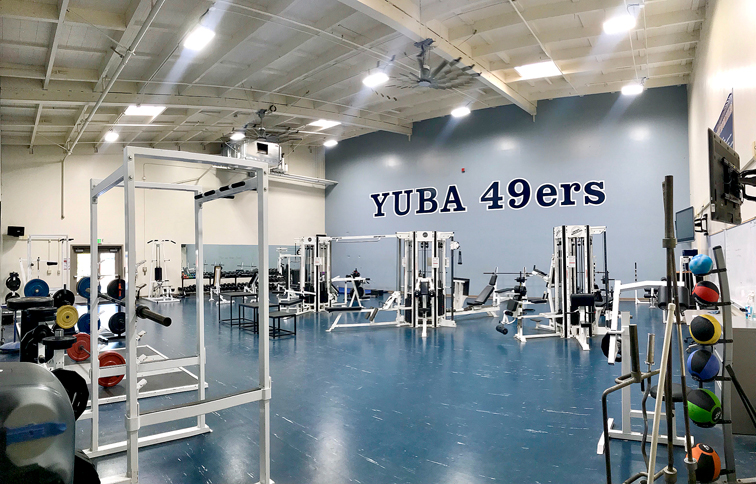 Thad Johnson hopes his addition to the baseball staff at Yuba College makes a difference in the weight room and on the field. Submitted photo

From 2007-12 at Frewsburg Central School, Johnson set the New York state record for career hits with 200.

As a freshman in 2009, the right-handed batter was the Post-Journal Player of the Year, hitting .530 with 14 doubles, seven triples and four home runs while driving in 33 runs, scoring 50 runs and stealing 26 bases. On the mound, the right-handed thrower was 3-2 with a 2.92 earned run average, striking out 39 in 24 innings en route to being a Second-Team all-state selection.

As a Post-Journal All-Star his sophomore and junior seasons, Johnson combined for 19 doubles, eight triples and seven home runs while driving in 60 runs and scoring 56. He also went 10-4 on the mound and was a Second-Team all-state honoree both seasons.

He put together another Post-Journal Player of the Year season his senior year, hitting .562 with 11 doubles, eight triples, six home runs while driving in 28 runs and scoring 52. On the mound, he was 8-2 with a 0.90 ERA, striking out 113 in 62 innings en route to being a First-Team all-state selection.

His junior year was his best when he hit .354 with 13 doubles, a triple and three home runs to go along with 31 RBIs and eight saves on the mound. For his efforts he was named a finalist for the national John Olerud Two-Way Player Award.

Johnson had his first managing job last summer when he led the Sandbridge Seagulls of the Virginia Beach Collegiate Baseball League.

“It was honestly everything I envisioned. … It’s definitely a spot to go to get better,” he said. “I thought it was a really successful summer. We just preached getting better. We were one game or two percentage points away from playoffs. … The number of one-run games we won was unbelievable. … We probably had the fewest number of Division I guys on the roster.”

In two years at Menlo College, the Oaks went 32-53, including 24-44 in the Golden State Athletic Conference.

“The overall program, learning from John (Carrion) and Nick (White), they know the game pretty well,” Johnson said. “It was a perfect spot for me for the last two years. I learned a lot about how to develop people.”

Now just over 150 miles to the northeast, Johnson hopes the 49ers will fare better than the Oaks.

“I really want to help people. I always wanted coaches who care,” Johnson said. ” … Eventually I want to take over a junior college in a good spot. That would be kind of fun.

“We hope to learn how to start turning a program around,” he added. “We want to implement a culture and keep people accountable.”

The #HeritageStrong Virtual Golf Classic will replace the annual Heritage Golf Challenge this year due to the ...

LAKEWOOD — The “Short List” got a little longer last weekend. Using a 9-iron, Ryan Short of Niobe aced the ... 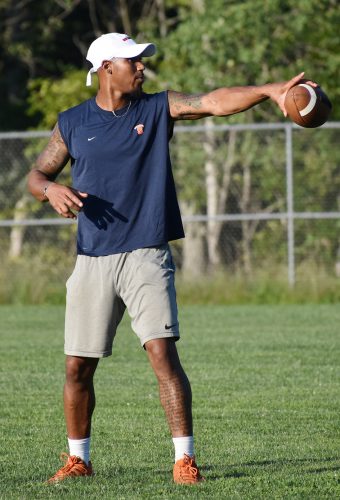 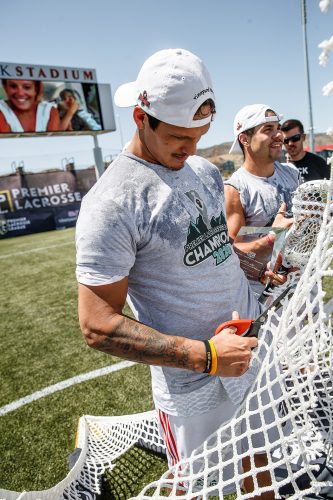 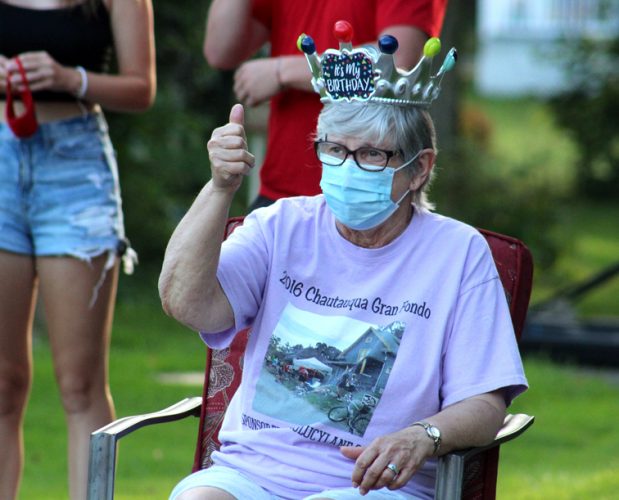 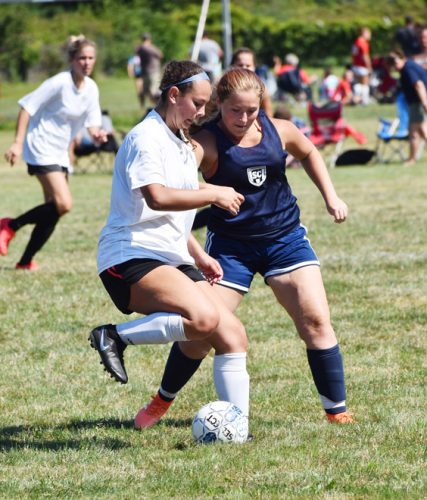 Battle For The Ball