Following Hip Injury, Conley Gets Back On Track In Jamestown

Conley leads the PGCBL with a .580 on-base percentage and is fourth with a .588 slugging percentage. P-J photo by Matt Spielman

Jamestown’s Christ Conley is fourth in the Perfect Game Collegiate Baseball League with a .381 average this summer. P-J photo by Matt Spielman 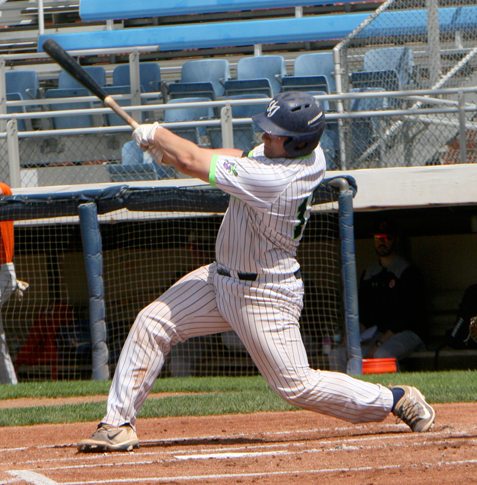 Jamestown’s Christ Conley is fourth in the Perfect Game Collegiate Baseball League with a .381 average this summer. P-J photo by Matt Spielman

Although their roster is littered with impressive talents that have led the Jamestown Jammers to the best record in the Perfect Game Collegiate Baseball League this summer, it’s hard to say any one player has had more of an impact on their success than catcher Christ Conley.

The soon-to-be Canisius College redshirt senior leads the league in on-base percentage (.580) and is fourth in both batting average (.381) and slugging percentage (.588)

Conley has also handled the lion’s share of innings behind the plate for the Jammers, whose pitching staff ranks second in strikeouts (246) and earned runs against (92) while leading the league in fewest home runs against (3), batting average against (.215), slugging percentage against (.277) and ERA (2.98).

Having Conley back for his second season behind the plate was a no-brainer for Jammers manager Anthony Barone when it came time to lock down his roster for this season.

“When the season ended, our first line of business was getting Christ Conley back here in Jamestown. That sort of solidified everything,” Barone said Monday evening. “We could build around him as the catcher. … When you have your main guys back from the prior year … you know you’ll be OK offensively, defensively and on the mound.” 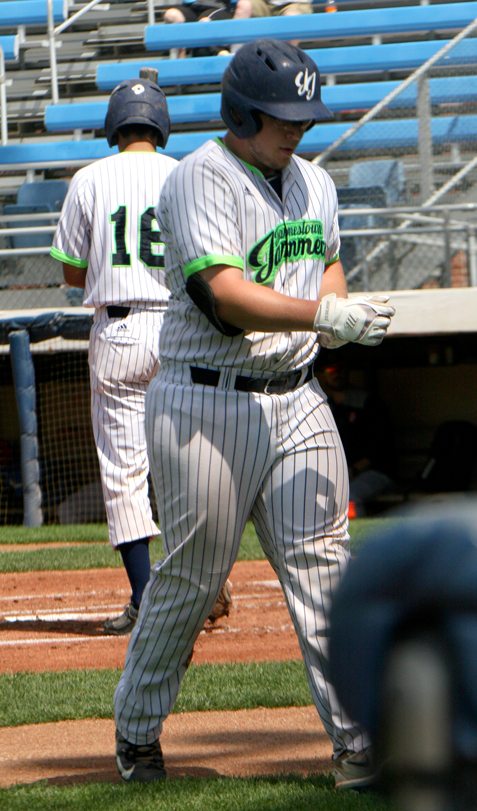 Conley leads the PGCBL with a .580 on-base percentage and is fourth with a .588 slugging percentage. P-J photo by Matt Spielman

As a freshman at Canisius in 2014, the Lake Shore High School graduate from Derby who was a Second-Team All-State selection his senior year, hit .336 with five doubles, a triple, a home run and 23 RBIs. His knack for not getting out began to show itself to the tune of a .464 on-base percentage that included being hit by a pitch 10 times. His on-base percentage ranked 44th nationally, including second among freshmen, and the left-handed hitter was a Second-Team All-MAAC selection.

“I coached him in Wellsville with the NYCBL when he was an incoming freshman at Canisius. I’ve known him for quite a while,” Barone said. “He had a really good summer back then. You could tell back then he was going to be a special player, a guy you want in your dugout any given year.”

A torn labrum in his hip sidelined Conley for his sophomore year at Canisius and the rust began to show during his redshirt sophomore year. In 49 games in 2016, Conley hit .258 with six doubles being his only extra-base hits. He drove in just 15 runs and his on-base percentage dipped to .384.

“It was definitely one of the toughest things I’ve experienced, not only in baseball but in life,” Conley said Monday evening. “It was definitely something to work at and overcome. … The season after that I didn’t have a great year. I came to Jamestown in the summer, worked on a few things, came back this past season and had a better year.”

Last summer with the Jammers, Conley hit .306 with seven doubles, a triple, three home runs and 25 RBIs to go along with an on-base percentage of .505 on his way to a PGCBL All-Star selection. 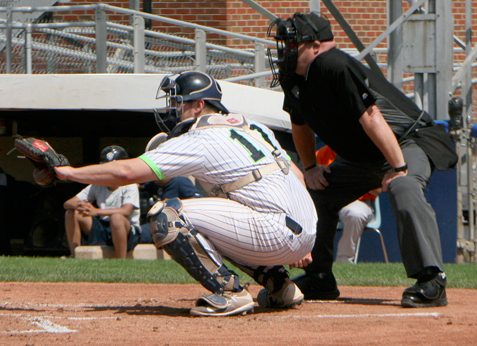 “He needed to just get healthy. That was his first year back from that hip surgery,” Barone said. “He had a lot to prove last summer. … Once he got his reps and his health, everything rounded into form.”

That success continued this spring with the Golden Griffins as he hit .299 with eight doubles, a triple, three home runs and 41 RBIs to go along with an on-base percentage of .468 that included being hit by 20 pitches.

“I don’t really look at the numbers, I just go up every at-bat and plate appearance with the same mindset,” Conley said, “just to compete every at-bat … and get into good counts to succeed and help the team.”

This summer has been a continuation of that growth for Conley, who has batted out of the leadoff spot a majority of the time.

“What he does at the top of the order … he makes it such a tough first inning for the pitcher,” Barone said Monday evening. “(The pitcher) usually has to throw a bunch of different pitches. Our guys get to see the repertoire the staring pitcher has.”

He just recently lost the team batting lead to Jimmy Standohar (Mercyhurst University), who is now hitting .392, but Conley remains tied for second on the team in hits (37) and is second in doubles (11) while his three home runs are also tied for the team lead. Conley has also walked an astounding 39 times while getting hit by a pitch 11 times in 151 plate appearances.

“By the end of the season it will be a tight race for the batting crown, but all those guys want to do is win. All three of those guys are team guys,” Barone said about Conley, Standohar and Canisius’ John Conti, whose average has recently risen to .367. “Nobody cares about statistics. When you don’t care about that, you can do well. If you focus on the team stuff, the individual stuff will take care of itself.”

While the Major League Baseball draft has passed Conley by each time he has been eligible, it seems hard to fathom teams ignoring a player with the penchant for getting on base as much as Conley does.

“I actually spoke with a couple of scouts before the draft this year,” Barone said. “He’s going to get his chance professionally. … Once he gets into an organization, I think he’ll turn a lot of heads and stick around for a while.”

Even if teams from New York City to Los Angeles don’t fully appreciate Conley’s skill set, the Jammers do. Barone and Conley’s teammates hope it carries them to a PGCBL championship in the coming weeks.

“Some guys aren’t at summer ball to win a championship, but when teams are this good, they realize that they can go all the way,” Conley said. “The athlete in everybody comes out and as an athlete that’s all you want to do is compete and be the best in the game.

“This year, our team is in for it all,” Conley added. “There’s nobody out there that just wants to go home after the regular season. Everybody is here to win a championship.”