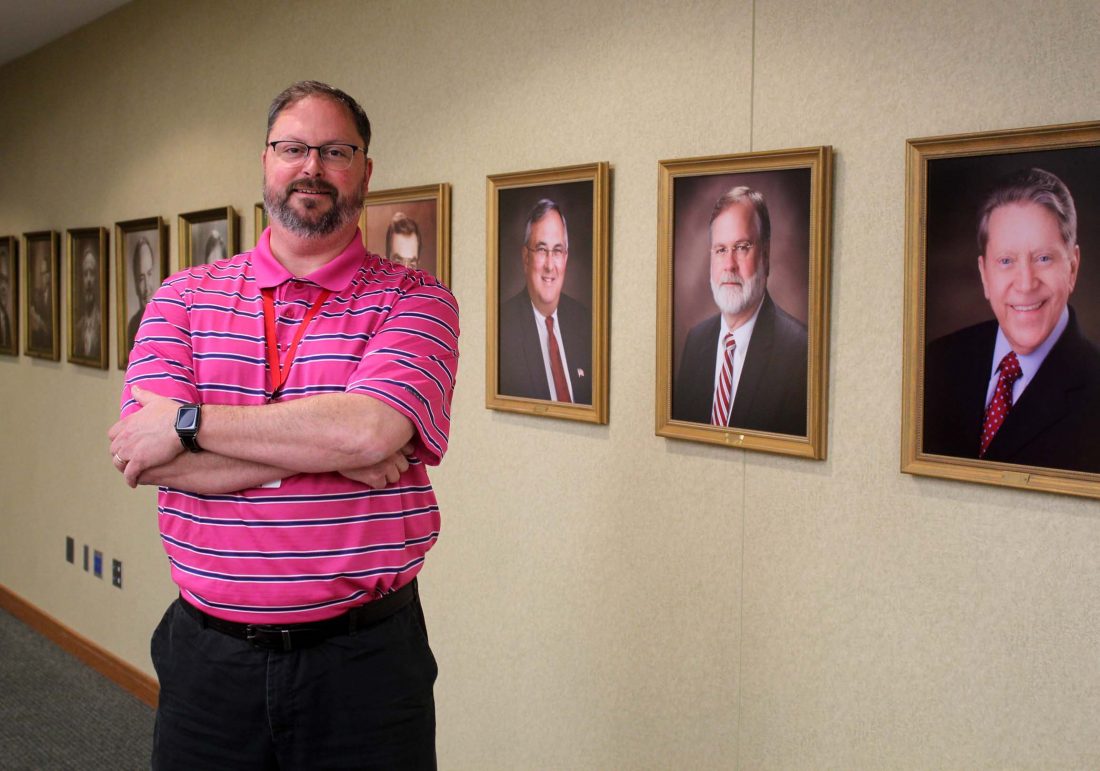 Newly-appointed Jamestown Public Schools superintendent Dr. Kevin Whitaker stands in the the district’s board room among the portraits of past superintendents at the Deke Kathman Administrative Offices on Martin Road. Whitaker began his tenure as superintendent on July 1. P-J Photo by Cameron Hurst

Editor’s Note: This is the second of a two-part conversation with Dr. Kevin Whitaker, who took over as the superintendent of Jamestown Public Schools on July 1. Part One ran in Monday’s edition of The Post-Journal.

One hundred and sixteen days.

That’s how long it’s been since local students were last in a classroom setting. And, as the ensuing months progress, that number will only inflate into one that far extends the duration of normal summer vacation.

While reintroducing students to a classroom setting in the most effective way possible is of importance to new Jamestown Public Schools superintendent, Dr. Kevin Whitaker, of equal importance is the question of how COVID-19 will impact the district’s finances moving forward, noting that the two issues are “neck-and-neck.”

“They are equally scary — one because it’s the iceberg that can sink you and the other for people’s safety and health,” Whitaker, whose tenure as superintendent began July 1, told The Post-Journal during an interview on his first day.

“The fiscal situation which is desperately scary,” he added. “If the governor does not take money from us, we will struggle through and be okay for this year. If the governor starts taking money from aid, like he just recently did with the small cities themselves — there are maybe 12 or 15 that have fiscal years that ended June 30 and he took 20 percent of their state aid away. If that happens, we are in a world of trouble.”

Governor Andrew Cuomo has indicated that a 20 percent cut — leaving school districts with a contingent budget — could happen if the state does not receive the federal education aid. That decision would decimate school districts like Jamestown.

“We don’t have enough money, nor would we in a perfectly healthy year, you’re just not allowed to carry $15 million of extra money from year to year,” he said. “We wouldn’t be able to cover that with some hidden stash. It immediately becomes programming and people and I hope it doesn’t come to that.”

He added, “That and understanding where we are and understanding what our next steps will be in planning for the future over the course of the next three-to-five years probably for this thing. That is always on my mind. Because without that, nothing else can happen.”

The response to COVID-19, however, still remains. On Thursday, the district held a training session for administrators who will train 12-month staff members in safety protocols. The training included basic items such as putting on and taking off a mask and also included details on what supplies they will receive as well as the new processes for entering a building.

“We have to be uniform and we have to be in compliance in order to have both staff and students come back to a place that is safe for them,” he said.

“We also have to think about — and I don’t know how many folks think about this — there is staff with legitimate medical issues and they are concerned about returning. We have to think that through. There’s no reason to put somebody at multiple times greater risk of death to come back and we have to think about a way to help them still work but to do that differently.”

He added, “There’s everything from the big picture to the individual picture when it comes to this pandemic.”

And while Cuomo announced on Monday that he has asked the state’s 700 school districts to submit some form of a reopening plan, Whitaker realizes that guidelines probably will not be made clear until closer to the start of school, adding to the frustration.

“The challenge with things that the governor says is that he speaks in concepts,” he said in response to Cuomo’s remarks on Monday. “He has presented that there will be a concept for a plan to return. The challenge is we don’t have any specifics yet.”

As far as what he hopes to see, Whitaker hopes that conditional politics will stay out of the equation.

“There are good people that work at the state education department and they try to do the best that they can for component districts across the state,” he said. “Something I also know is that politics are impossibly intertwined with this. What that means is, the likelihood that we will get specific guidance about what to do is pretty low, because politicians don’t want to look bad. Specifically the governor. The governor does not want to say, ‘This is what schools should do,’ because it’s too nuanced. Something won’t go well and he doesn’t want to be blamed.”

That adds to the challenge, he noted.

“We have six weeks tops until we have to have solid plans in place and communicate everything and understand what’s going to happen and get feedback from the community and in nearly the same sentence that he said there may not be school, he said that there has to be a plan for school,” Whitaker said. “That puts us back to square one which is: plan for total closure, plan for hybrid, plan for some kind of alternating day, grade, whatever and full online. So now we have these four or five, six different options. So what we’ll do is when the guidance comes out, we’ll fit what we have to that guidance.”

And that decision will not come from him alone.

“That will at least help us frame thing with a broad brush,” he said. “We’ll have at least the outline or the guidelines from which we can continue to build something.

He is fortunate, however, to have a seasoned staff to support him — each member of the district’s central administration team predate Dr. Bret Apthorpe, save for Chief Operations Officer Lisa Almassi who was appointed in February 2018.

“The good thing is that with that experience comes history,” he said. “The history is incredibly important to me. I’ll get questions and I’ll ask about the answer and the history on that particular issue. Those are the things that help me learn the district and the community and the people in a way that’s much deeper than regular, ‘Give me the answer.’ I’m incredibly fortunate to inherit really everybody.”

And while the district’s fiscal future remains unclear, Whitaker still can’t help but be aspirational for what he sees as a “destination district.”

“All of the stuff that we have — anything is possible,” he said. “If we marshal the resources and the support for it, it can happen. Ultimately, we could end up partnering with manufacturing training, we could partner with International Baccalaureate schools, we have the talent and academic talent to have multiple AP scholars, not to mention — music and incredibly talented kids. The opportunities are there.”

Taking advantage of those opportunities will require some adjustment on the part of staff, he noted. But, he will be there to support them every step of the way.

“You have to provide the environment in which you can thrive so that you can feel safe to risk something new,” he said. “What I’ve always said to my staff in the past is that I am 100 percent okay with stepping up to the plate, taking a couple of rips and striking out and coming back. I am not okay with staying in the dugout and never stepping up to the plate. Whether you hit the ball or you don’t, thumbs up. But at least you’re trying.”

“This is about the kids,” he added. “The purpose of why we exist is to create great citizens who can do great things. That business, like sausage-making, is messy and difficult … But ultimately, we need to do that work to create the product that our community and our country and our citizenry deserve.”

He also wants the community to know that he intends to make transparency a priority.

“I think it was Abraham Lincoln who said, ‘To make stuff up, I can’t remember all of that’ … It’s just way easier to be truthful,” he said. “I’m a really transparent guy. I’m much more comfortable with being straight forward than trying to be cagey — If you think there’s some kind of ulterior motive, you probably misunderstood me.”

With that also comes an unending dedication to students.

As well as an understanding of the role staff play in students’ success.

He added, “I’m not a barge-over-people person. I’m about support and creating the environment in which they can thrive.” 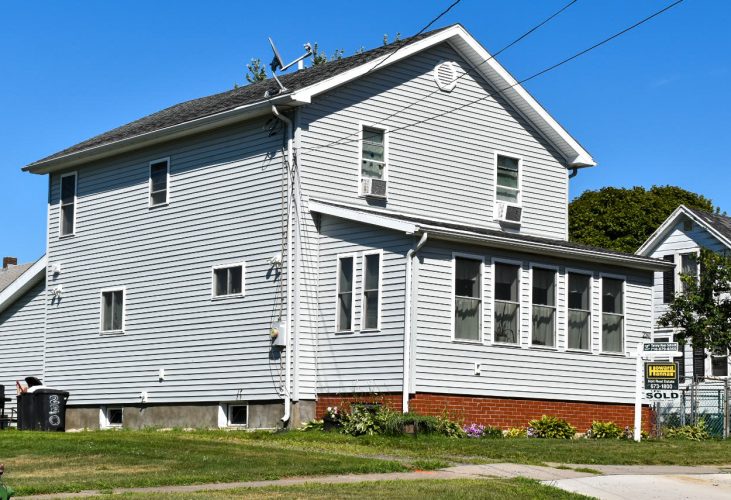 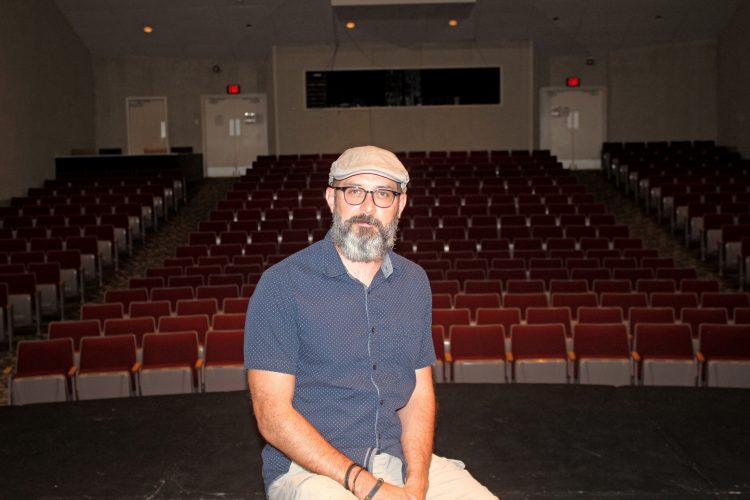