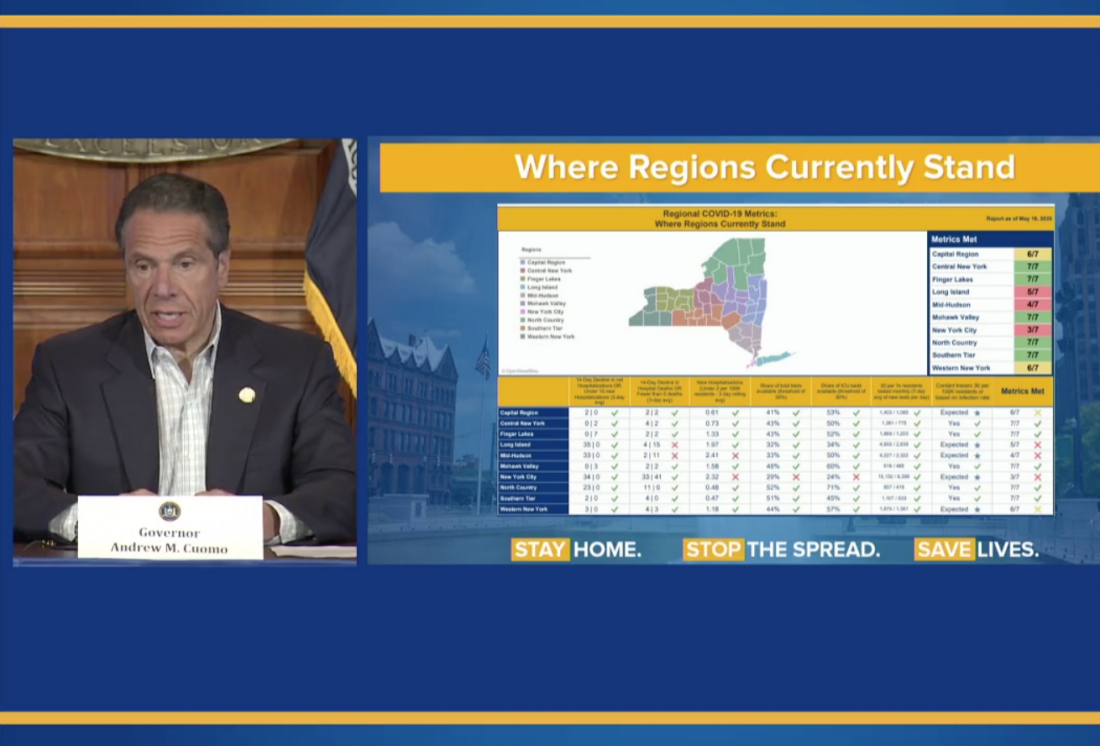 The Western New York region has met all hospitalization metrics as part of guidelines needed to begin reopening.

Gov. Andrew Cuomo presented up-to-date data Sunday, which showed the WNY region — which includes Chautauqua, Cattaraugus, Allegany, Erie and Niagara counties — was meeting six of the seven metrics. The lone metric involves contact tracers, and the governor said that is “purely administrative” at this point.

If all seven metrics are met, the region will be allowed to enter Phase One in reopening some parts of the economy. That includes construction, manufacturing, curbside pickup for retail and agriculture.

“I’m very happy to learn after the recent drop in hospitalized cases WNY has met all hospitalization metrics for reopening,” Erie County Executive Mark Poloncarz said in a Twitter post.

Further, Poloncarz has indicated that Erie County has the tracers needed to meet the state’s mandate of 30 per 100,000 residents. He said a list of the 291 employees to be trained as tracers has already been sent to the state.

Contact tracers are people who identify those who may have come into contact with an infected person.

Locally, Christine Schuyler, public health director, said earlier this month that the county Health Department has pulled registered nurses from other departments — 17 in total that are currently available — for case investigations as needed. She said 36 staff members have been trained to assist in contact tracing and, in case of a surge, another 27 staff “can quickly be brought up to speed to contact trace if needed.”

News of the six metrics being met was cheered by local officials. Jamestown Mayor Eddie Sundquist posted on Twitter: “Excellent news. We are one metric away from reopening!”

As recent as Friday morning, the WNY region was meeting only four of the seven metrics, with the number of people hospitalized up in Erie County, where the bulk of confirmed cases of COVID-19 have been reported. However, those numbers had begun to come down by the end of the week, allowing the region to meet the three-day average of hospitalization rate.

Cuomo indicated Sunday that the Capital region was also meeting six of the seven metrics. Besides the New York City area, all remaining regions have been allowed to enter Phase I.

In Chautauqua County, 53 cases of COVID-19 have been reported, an increase of seven from Friday. There remains 14 active cases in addition to 35 recoveries, four deaths, 214 county residents either in quarantine or isolation and 1,754 negative tests.

In its daily update, the county Health Department noted that the increase in confirmed cases and those in quarantine was due to “people not abiding by social distancing guidelines and gathering together.”

“New cases develop when people are in the same location at the same time and in close contact with someone who is infected with the coronavirus. Large gatherings and parties cause an increase in the number of people being monitored.”