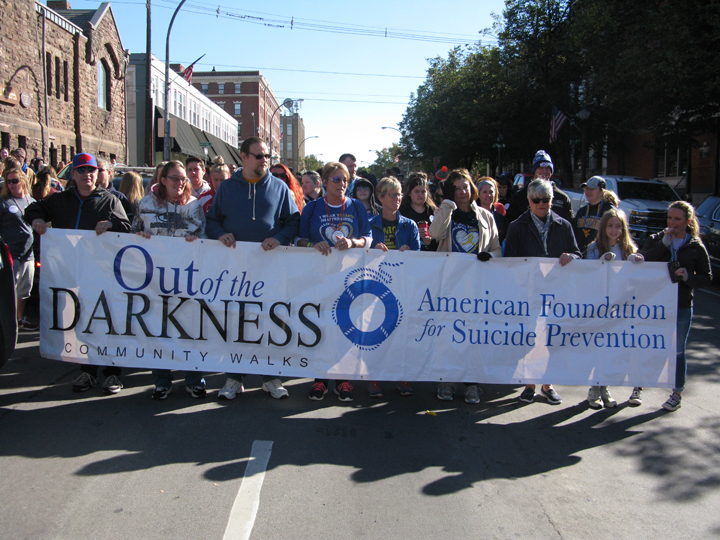 Hundreds took part in the Jamestown Out of The Darkness Walk on Saturday. More than 550 cities participated in walks over the weekend. P-J photo by Carly Gould

Suicide is the 10th leading cause of death in United States and affects 1 in 5 families, according to the Community Alliance for Suicide Prevention.

The annual Jamestown Out of the Darkness Walk, hosted by the Community Alliance for Suicide Prevention, took place Saturday at St. Luke’s Episcopal Church. The organization host a sale on baked goods, custom T-shirts, merchandise from the American Foundation for Suicide Prevention and suicide prevention resources. Proceeds from the event support local suicide prevention and education efforts.

“We hope by walking we will draw attention to the issue and keep other families from experiencing a suicide loss,” said Victoria Patti, coordinator of the Community Alliance for Suicide Prevention.

Many participants in Saturday’s walk wrote the names of loved ones on badges, and those names were read aloud during the opening ceremony. Participants could also write inspiring messages on a flag and add it to a banner that was made for the occasion.

Beaded necklaces were handed out, each color representing a person’s reason for fighting against suicide.

“I am walking today because I lost my husband,” said Cat Childs of Dunkirk. “I do an event at my tattoo shop where I give people the semicolon tattoo to help raise awareness.”

The semicolon has become a symbol for suicide survivors. According to the website for Project Semicolon, the semicolon is used by writers when “they could have chosen to end their sentence, but chose not to.”

In the case of those who have attempted or thought about suicide, “the author is you, and the sentence is your life.”

The semicolon being used as a symbol of suicide prevention was started by a nonprofit organization called Project Semicolon, founded by Amy Bleuel in 2013.

“It’s important to recognize the signs of suicidal thoughts,” Childs said. “Peoples’ stories deserve to continue. We need to talk with others more. That’s how we can help those who are suffering.”

Different suicide prevention organizations were present at the walk to provide resources. One of them was Team AMVets Department of New York. Kevin Matteson, zone one director, said the department has a helpline number specifically for war veterans contemplating suicide.

“The people they talk to on the phone also used to serve in war, so they know what these people are going through,” Matteson said. “I was in the Army myself. We know how to talk to these veterans and how to relate to them because we’ve been through it too.”

The walk began around 10 a.m. with songs by the Chautauqua Youth Choir, including the national anthem. Bubbles were blown at the start of the walk in memory of those who have lost their lives to suicide.

“No matter how dark the night, morning always comes,” said state Assemblyman Andy Goodell, R-Jamestown, who was participating in the walk. “None of us know what the next day will bring. But we are lucky in Chautauqua County that we have several incredible organizations that can help people in the middle of their night and recognize the open opportunity that comes with the morning.”