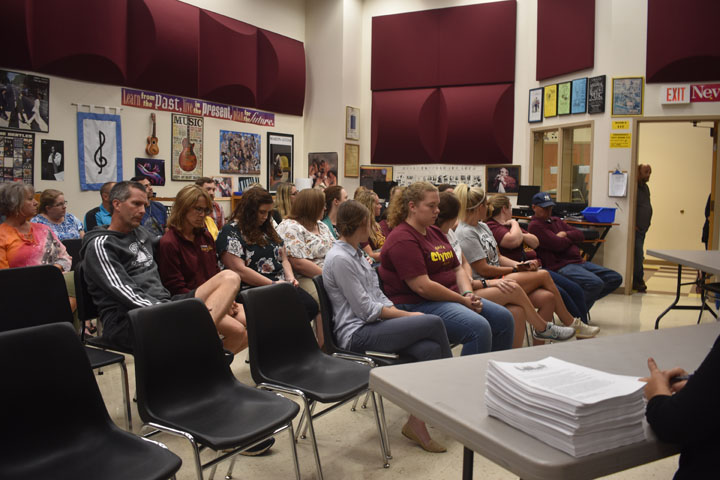 The board is currently interviewing candidates for an interim superintendent and has 90 days to fill its board vacancy. P-J photo by Jordan W. Patterson

The resignations of Principal Corey Markham and board member Amanda Stapels were accepted during a special meeting Tuesday that was scheduled for the sole purpose of interviewing potential interim superintendents. Markham also served as the director of special education and began with the district during the 2018-19 school year.

After the resignations were accepted, many people from the public asked questions and raised concerns during the public comment period.

Dave Bodamer, a Clymer teacher who has children in the district, addressed the board and called for better communication among the board, the school and the community.

“I don’t care what your personal feelings toward any of us, toward the school or your past. I don’t care. It’s not about you. It’s about all these kids,” Bodamer said to the board. “You have no idea what kind of black cloud you brought back on this school this past week. Last year, when that budget passed, it was the best day coming to work. Today, the cloud’s back.” 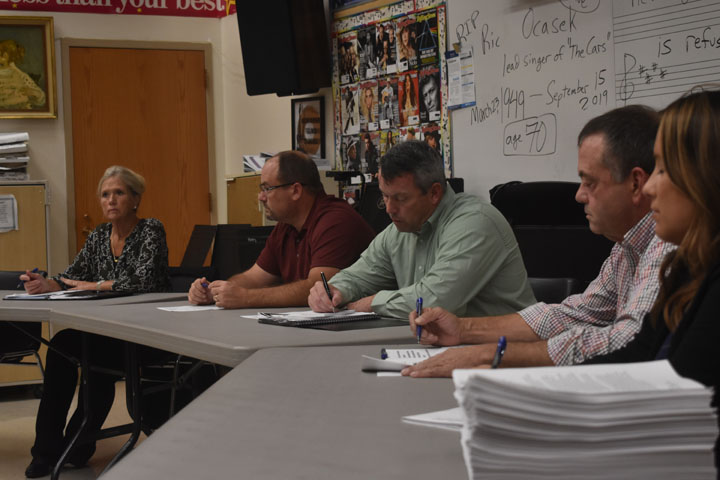 The Clymer Central School Board held its first run of interviews for the interim superintendent position after Superintendent Ed Bailey announced his resignation last week. The resignations of former board member Amanda Stapels and Principal Corey Markham were accepted at Tuesday’s meeting. P-J photo by Jordan Patterson

Bodamer said the district has had “tunnel vision” in recent years and called for a unified school community. He asked the board to set aside its personal differences and to focus on what is best for students.

“This town supports this school. That’s plain and simple,” he said referencing the passed 2019-20 school budget revote in June. “It’s about time you guys do.”

The board, normally accompanied by the superintendent and one more board member, was assisted by David O’Rourke, Erie-2 BOCES district superintendent. O’Rourke is providing guidance throughout the interview process for an interim superintendent in Clymer.

Bailey’s resignation is effective Sept. 30, Markham’s resignation is effective Oct. 16 and Stapels’ resignation was effective Sept. 12. No statements were provided on behalf of Markham and Stapels. However, Bailey cited a disagreement between the board’s vision of Clymer’s future and his own as the primary reason for resigning during the Sept. 10 special meeting. The board is now comprised of recently appointed Board President Ed Mulkearn, Vice President Dave Maleski, Carole Siverling and Mike Schenck.

O’Rourke explained to those gathered at the meeting that the board has several options as to how to proceed with filling the vacant board position. The board can hold a special election where members of the community can run for election or solicit interest from the community and hold interviews with candidates until one is eventually appointed to the interim board position. The board has 90 days, however, to fill the vacancy. Until the position is filled, the board can operate with its remaining four members.

If the board fails to fill its vacancy, O’Rourke has the power, as the representative for the commissioner of the state Education Department, to appoint a board member for Clymer. However, O’Rourke maintained that the Clymer board intends on filling its vacancy ahead of the 90-day deadline.

O’Rourke also noted that, after having conversations with board members, the primary goal of the board, as of now, is to first hire an interim superintendent.

Board President Ed Mulkearn read a statement on behalf of the board addressing the recent developments. In the statement, he addressed growing “high-level” anxiety and uncertainty in the community. Additionally, Mulkearn discussed the current goal of the board which is to solicit interest from the Panama and Sherman school districts about shared services among employees.

“We have been through some very trying times over the past three years,” Mulkearn read to community members. “A failed merger, two failed budgets and all of the uncertainty associated with developing a plan for our future. We are just beginning a process that will take time to develop and implement.

“We will be meeting with Sherman and Panama in the next few weeks to begin talking about how we can work together. There is no way to predict the outcome of the discussions with our neighbors or what benefits await,” he continued. “However, we believe that the same success that we have shared on the football field working together are attainable in all other aspects of our student’s educational experience.”

Mulkearn noted in his statement that the district is not “financially sustainable,” that the board is acting on the results of ballot questions included during the 2019-20 budget vote, and that the board wants to maintain “a high level of academic achievement.”

A packet comprised of the board’s statement and three studies regarding the district’s future and current financial status was made available for the public.

Following the board’s motion to enter into executive session to interview candidates, an impromptu open forum was held with community members airing out concerns regarding the future of the district.