Another Story From A Local Woman’s History 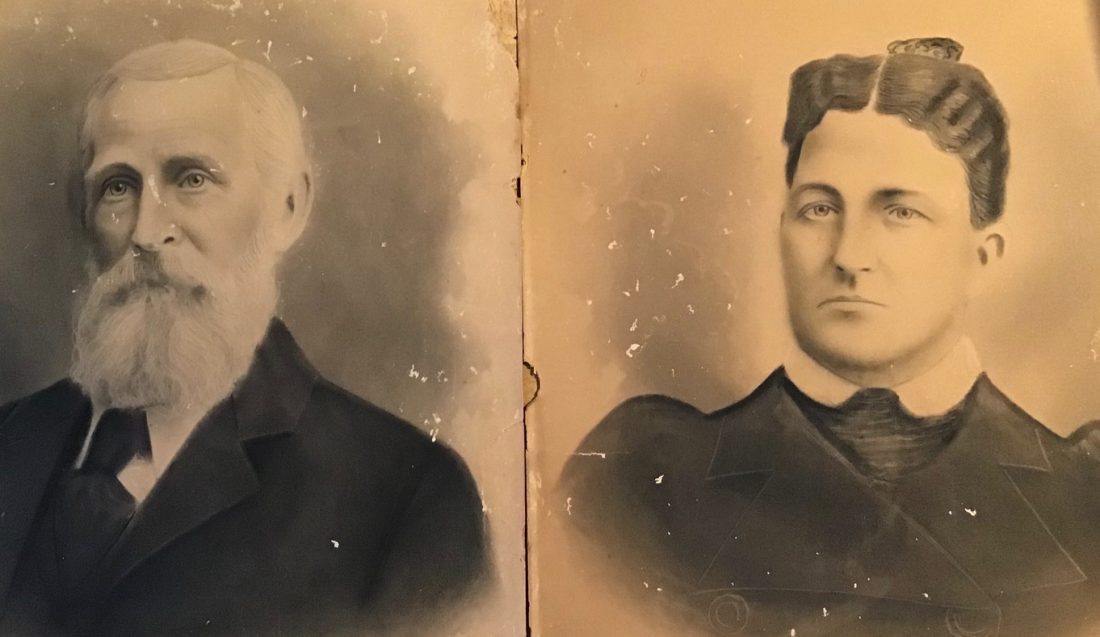 Portraits of Almon and Mary Jane (Wilcox) Brown who moved west and came back to Chautauqua County during the 1870s and 1880s.

Mary Jane was born in the town of Chautauqua in 1846. She was the eldest of five children born to Rodman and Mary Ann.

Not much is known of her childhood. She married Almon in 1866 and they lived in the town of Chautauqua where Almon leased some farm land. He had been born in Fluvanna in 1836.

Although there is no evidence that he was in the U. S. Army during the Civil War, he was somehow present as a teamster during the First Battle of Bull Run and could tell about the retreat back toward Washington, D. C. His older brother, Henry, had been in the Union Army and after the war was over, he married a local girl and they moved to Missouri. By the 1870s, Henry signed a power of attorney to someone to pick out a place In Kansas for a homestead claim and build a house for them. Henry and family moved then to Brown’s Grove, Pawnee County, Kansas. Soon after that move, Almon and Mary Ann, with their daughter, also moved to Kansas next door to Henry and established a homestead.

Mary Jane, like many other women of that time, left home for the west. She left her family and friends and headed for the unknown. Probably to Mary Jane’s advantage, her father had been a lumberman and spent much of his time in the woods. Her mother was well versed in the plants of the area and their healing powers. Mary Jane undoubtably learned many skills from her parents that helped in her new environment. A son, Louis, was born while the family was in Kansas. Brown’s Grove was in one of the western counties and Louis could tell some stories about the family and others having to go to Fort Larned when there were “Indian troubles” in the region.

One day, Louis saw something on the large stone used for a door step at the front of the house. He told his mother that there was something he did not like out there. After one look, Mary Jane went out the back door, picked up her hoe, and went around the house and whacked the head off the rattlesnake with her hoe. After five years of homesteading and developing the farm, Almon received a deed for the land from the Federal Government. After a few years, Almon and some others wearied of contending with hot winds and insects. They were able to trade their land with others in Missouri. Once again Mary Jane had to leave family and friends and move to an unfamiliar place.

The land they got in Missouri was 200 acres of river bottom land. There was a spring and Mary Jane could enjoy the water piped into the house-what a convenience! After a few years word was received that Almon’s mother was ill and wanted to see him before she died. So again, Mary Jane faced another move, but this time it was back to familiar territory and family and friends. An auction was held. The rest of their belongings were packed up and back to Chautauqua County the family went. They were there in time to visit Almon’s mother before she died. Almon, with the money he had received from the sale of his Kansas land and his Missouri land, was able to buy some farmland in the town of Chautauqua where the family stayed, although they did eventually move to a different house.

Mary Jane was not unique in her many travels. This was a time that many families moved west “to seek their fortune.” Nor was she unique in her return to her hometown. Reading the history of Brown’s Grove, Kansas, there were others from Chautauqua County resident in Pawnee County and Brown’s Grove who after a few years also returned to Chautauqua County. This was a time that there was land available for homesteading and many were lured to the west to try to obtain the free land in exchange for settling there and improving the acreage.

I wish I had more stories about the experience of Mary Jane and some of the other women from Chautauqua County as they became a part of the westward movement in the United States. Mary Jane was one of my great grandmothers. I have the rattles that came from the rattlesnake she killed in Kansas. I have a bed and dresser that went to Kansas and back. I have visited the land that they homesteaded. I could see in one corner of the very extensive wheat field what was probably the foundation stones of their home and an old gnarled tree, maybe an apple tree, near the foundation. I did not venture out to those foundation stones just in case there were angry descendants of that rattlesnake.