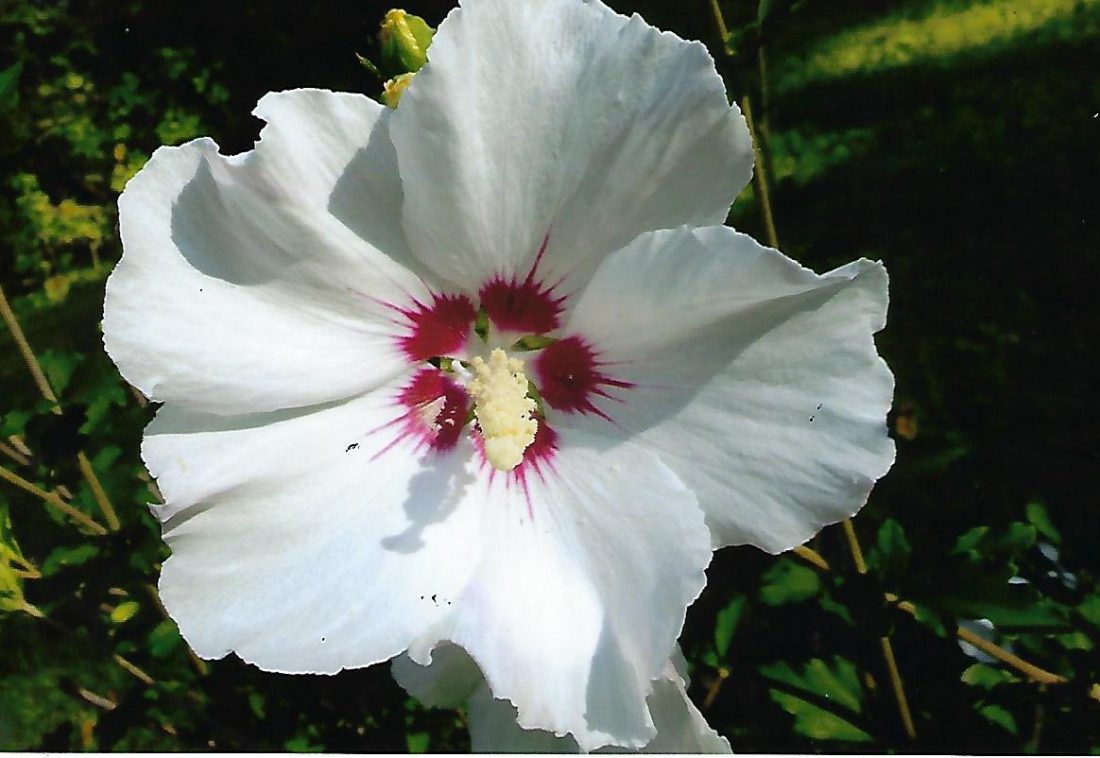 A woman I deeply admire has offered to give me all the Rose of Sharon plants I want.

The way she describes it, these sneaky little plants wait until a moonless night and then multiply like crazy. I wish I could be so lucky. I keep insisting the pretty little flowers won’t prosper here in Cassadaga. I’m wrong (of course). It just took years for my one to get the idea.

Now that I do have a flowering shrub I would like more. That desire, however, places me in a conundrum. Where would I plant more? Trying to mow even now is like running an obstacle course with all the growing things (not to mention the trees) popping up (oh, yes, intentionally) throughout the lawn. And, to be truthful, even if I had a perfect spot for new plants, I am too lazy and quite loathe to want to dig the necessary holes. Let me appreciate what I already have. (Come to think of it, that’s pretty good advice for everything I do.)

It’s a pretty little bush really, flowering well into October which is very nice since not too much else is still going on then. Oh, sure, wildflowers galore. The chicory and goldenrod (now that the Jerusalem artichokes are losing their heads for the final time) and asters seem to favor purple, golds and rusts about now. They’re the colors I reach for frequently in my clothes.

Wikipedia to the rescue yet again: “Rose of Sharon is a common name that has been applied to several different species of flowering plants that are valued in different parts of the world. It is also a biblical expression, though the identity of the plant referred to is unclear and is disputed among biblical scholars. In neither case does it refer to actual roses, although one of the species it refers to in modern usage is a member of Rosaceae. The deciduous flowering shrub known as the Rose of Sharon is a member of the mallow family which is distinct from the Rosaceae family. The name’s colloquial application has been used as an example of the lack of precision of common names, which can cause confusion. ‘Rose of Sharon’ has become a frequently used catch phrase in poetry and lyrics.”

The name “Rose of Sharon” appears in our Bible though it all depends on the translation. “Rose of Sharon” can as easily be “the flower of the field” or “lily,” “jonquil,” or “crocus.” Sharon turns out to be a fertile plain in ancient Palestine. The plants we now call by that name all originated outside the Levant so there’s no reason to connect this flower to the Bible.

Apparently “our” Rose of Sharon is “Hibiscus syriacus.” At least I recognize the flower in the picture. Turns out it is also the national flower of Korea. Called a “mugunghwa” there it’s considered a symbol of their desire for independence from Japan as it regularly returns a day after having seemingly faded away. It’s mentioned as growing in that country 1,400 years ago.

I was surprised to see it can grow one or two feet a year until it’s between 8 and 12 feet tall with a girth of 4 to 10 feet. Nobody’s told mine. They also tend to spread out with age (like so many of us).

I’ve been writing about plants long enough that my next questions comes automatically: Does it have any medicinal uses? Can we eat it?

“Rose of Sharon is used externally as an emollient to soften and soothe the skin, as well as used internally for digestive disorders. A tea made from the leaves and flowers are diuretic and expectorant. The essential oil is believed to smooth wrinkles, stop itching and other skin conditions. The bark contains several medically active constituents, including mucilage, carotenoids, sesquiterpenes & anthocyanidins. [Get all that?] The root bark has anti-inflammatory, soothing, calming, fever reducing abilities. It is used in the treatment of diarrhea, dysentery, abdominal pain, leucorrhoea, menstruation cramping.”

“Rose of Sharon’s flower buds contain mucilage, a gooey medicinal compound . . . that can be used to heal burns, wounds, gastric ulcers, inflammation & irritation, such as sore throats or urinary tract infections.” It can also be used to lower cholesterol, reduce the risk of heart and liver disease. It goes on.

Happily, it can also be used as a garnish. Chop the flowers and add to dishes or leave ’em as they are for salads. They make colorful, edible, presentation cups for dips. One can cook the leaves to add to quiche or greens or brew the flowers and leaves for an antioxidant tea.

Perhaps I can find room for another.